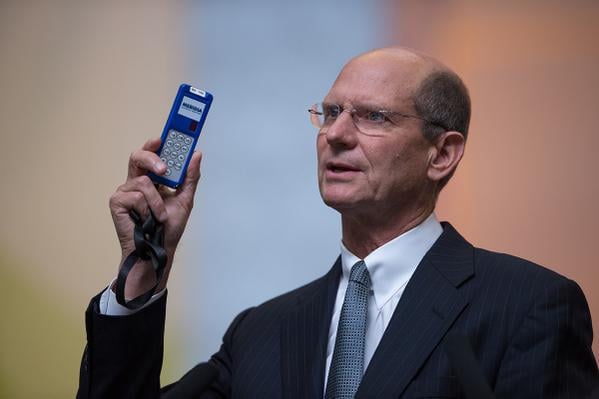 Throughout the 60th General Conference Session, electronic voting devices from Meridia Interactive Solutions, who according to the company's website, works with 95% of Fortune 500 companies, and 100% of the nation’s pharmaceutical companies own a Meridia system, have malfunctioned at every turn, according to General Conference leaders. The technical problems culminated on Sunday, July 5, in the permanent discarding of voting devices in favor of vote by paper cards, and in special cases, secret paper ballot votes.

In January of 2015, General Conference Undersecretary Myron Iseminger touted the new devices in a report by the Adventist News Network, saying the devices would ensure anonymity and would increase efficiency.

I think in many cultures delegates are caught in a difficult spot because, on one hand, we encourage them to prayerfully vote their conscience, but on the other hand, showing respect to their local leader sitting nearby is also very important,” Iseminger said. “We hope that particular pressure will be removed this time.”

On the opening day of the meetings, General Conference vice president Lowell Cooper, who chaired the first business session, gave instructions to delegates from the Worldwide Church on the use of the devices, and took a test vote. Of the 1,800+ registered delegates, only 300 or so votes registered in the first test. Cooper conducted several more tests of the devices throughout the day, each registering far fewer delegates' votes than expected.

On each subsequent day of the General Conference Session, business session chairs undertook sporadic tests of the voting devices with results that became familiar: in each test, chairs determined that the results did not indicate full functionality of devices. On the second day of Session, General Conference Administration announced that the problem was believed to be the unusually high wifi signal in the Alamodome, which had been turned down to facilitate voting. Church leaders also suggested that delegates might have been outside the designated voting area on the floor of the Alamodome, and admonished delegates to vote only from their designated delegate areas.

Meanwhile, rumors began swirling that some delegates might be deliberately not voting in order to force a return to visible votes by paper cards.

Things came to a head on the Sunday afternoon business meeting, after an announcement that votes would again be taken by cards. Delegate after delegate from the North American Division came to microphones during discussion of proposed changes to the Church Manual to request another test of the electronic voting system.

“We intend to try this system once more. It has been our intention that this system would work nicely, Wilson said. He blamed the purported equipment malfunction on the wifi within the dome, though General Conference leaders said that it had been adjusted two days earlier.

“We intend to take one more attempt,” Wilson said. “If the vote is not successful, we will have a recommendation to the body.”

Wilson explained the use of the devices to delegates once more. He noted that buttons 1A and 2B were the only buttons on the device to be used. He told delegates that there was a secret paper ballot system in place as needed, adding that it would be “cumbersome and laborious.” He added his hope that voting cards could be used for most votes. He spoke almost as though the test of the electronic system was a forgone conclusion.

Wilson stated that administration was as frustrated as anyone about the devices, calling it “an unintended and unanticipated problem.”

Wilson asked each delegate who had a voting device to stand and be counted, division-by-division. After that number was tallied, General Counsel Karnik Doukmetzian called for a vote on the devices telling delegates to push the buttons and then release them, and to push them only once.

After the time window closed on the vote-by-device, Wilson announced that steering committee decided the maximum allowable discrepancy between delegates with devices and votes returned was 51 (2%).

There was a discrepancy of several hundred votes, and Elder Wilson moved that the use of electronic devices cease and that votes be taken by voting cards or paper ballots for “very special” votes.

There was no discussion, and the motion quickly carried, meaning the end of the use of the Meridia devices.

A North American Division delegate asked that an electronic vote be taken on a division-by-division basis to find out where the discrepancies might lie. The request was ignored from the front.

Megen de Bruin-Molé from the Trans-European Division made a motion to re-consider the vote on the basis that many points of order had not been considered before the vote. The motion was seconded, put to a vote, and defeated.

Several more points of order followed. Session Chair Artur Stele looked visibly frustrated, asking delegates “do not play games.” He asked delegates not to return their devices until the end of the business session.

Prudence Pollard from the North American Division repeated the call for a division-by-division vote to determine the precise source of the discrepancy.

Stele declared the issue settled and asked the delegates to move on with proposed changes to the Church Manual.

Elizabeth Talbot from the North American Division called a point of order, saying the lack of discussion on Wilson’s motion was a violation of parliamentary procedure. Stele apologized, saying that perhaps he moved too fast, and immediately pivoted to discussion of the Church Manual.

Not long after the devices were officially scrapped, Meridia posted two tweets, saying their devices were not the source of the problem, and attributing the issue to human error. The text of the tweets follows, though the tweets themselves have subsequently been deleted.

@pastortyedavis @gcsession @MegenJM #GCSA2015 #gcsa15 Just off the phone with our team. System works, just can't get everyone to vote. #74%

Jared Wright is Managing Editor of SpectrumMagazine.org, and a member of the General Conference reporting team in San Antonio, Texas.