How Delegates Are Selected for General Conference Sessions 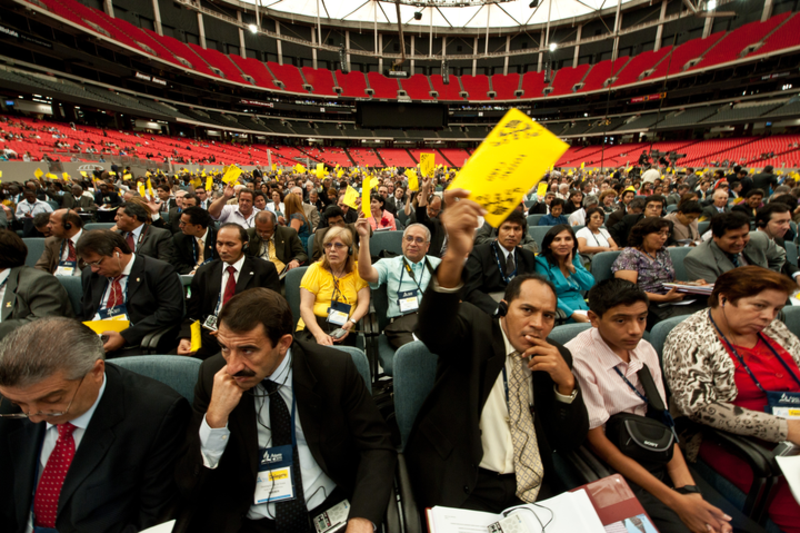 The world headquarters of the Seventh-day Adventist Church is abuzz with preparations for the upcoming General Conference Session. The 60th meeting of its kind in the 152-year history of the denomination will take place in San Antonio, Texas and will see as many as 60,000 people from more than 170 countries gather in the Alamodome.

Although sometimes thought of as a kind of global camp-meeting for those who come to hear music and preaching from around the world while connecting with old friends and meeting new ones, the heart of this event is a business meeting in which world church leadership is elected, critical issues are discussed and decisions are made governing how the church will move forward in fulfilling its mission.

The Business of Session

The very first official World Session of the Seventh-day Adventist Church was a one-day meeting held on May 20, 1863 in Battle Creek, Michigan with 20 delegates present. At the time the organizational structure of the Church was small and membership was only a few thousand, mostly from the United States of America. However, as the Seventh-day Adventist Church has developed in countries around the world, its membership has grown.

The rules governing the selection of delegates are spelled out in the Constitution and Bylaws of the General Conference that define the purposes and operations of the global church and those that govern a General Conference Session.

In an attempt to divest the definition of a delegate and the description of their duties from the technical language found in what could be a rather complex narrative, this article will attempt to describe in broad strokes and approachable language what forms this functional body.

In broad terms the structure of the Church can be understood by knowing that members belong to congregations. Congregations within a specific geographic territory are organized into a local conference/mission or in some cases, a union of churches. Defined groups of local conferences or local missions comprise a union conference or union mission. Unions are the building blocks of the General Conference.

Terminologies like ‘mission’ when attached to conferences and unions usually indicate that they are in a stage of development that has not reached full financial viability and self-sustenance.

The total number of delegates from each division must include at least 50% of the group being lay members, pastors or other front line workers. A majority of that 50% must be laypersons.

Delegates-at-large represent the General Conference and its institutions as well as divisions and their institutions.

The entire delegation for a General Conference Session is comprised of:

Who are these delegates?

Here are some interesting facts about the delegates at this GC Session:

How Delegates are selected

A question that is certain to be asked when reading statistics on gender representation is why is the percentage of female delegates so small when it is perceived that women are in the majority as pertains to Church membership?  The answer is simple. While efforts are continually made to ensure that the entire delegation shall be comprised of both genders, currently the positions from which these delegates are named and that generate the majority of delegates for the Session are held by males.  This will change over time as more women are elected to leadership positions and Conference or Union executive committee membership.

The executive committees of the unit that they represent select regular delegates. If the delegate represents a mission, the committee of the larger unit to which it is attached selects the delegate. They are a mix of lay people, pastors and teachers and church administrators.

Their job is to report to the Session and be present during the business meetings to debate, discuss and vote on items that appear on the agenda. They must be members in regular standing of the Seventh-day Adventist Church and they are often chosen because of their demonstrated interest and involvement in the church.

In recent years the church has made special efforts to include young adults, women and frontline workers in the delegate mix.

One-third of the total number of delegates must be present for the Session to be able to declare a quorum and to conduct business.

Shortly after the Session has officially begun, delegates will meet in groups or a “caucus,” one group for each division and attached union and one group for the General Conference and those delegates-at-large that it specifically names according to Bylaws and Executive Committee provisions. The purpose of these groups is to choose members from each group who will serve on the Nominating Committee. The number of Nominating Committee members from each group is specifically defined in the Bylaws.

Delegates, both regular and at-large, approve the agenda of the Session and they elect church leadership after receiving reports from the Nominating Committee.

In upcoming installments of the GC Session 101 Series we will discuss the policies that outline the formation of the nominating committee as well as their responsibilities. Future articles will also look inside the experience of being nominated by talking to a former nominee.

There are 2566 people as delegates designated to conduct the business of determining the leadership for the General Conference and its divisions, the fundamental beliefs of the Church, amendments to the Church Manual, and other matters that may be referred to the Session by the General Conference Executive Committee.  However, their most important business, and that of the church in general, will be focus on the plans and presentations sharing about the mission of the church in lifting up Christ, His righteousness, His three angels’ messages, His evangelistic mission to the world and His soon second coming.  The spiritual focus of the General Conference Session is the most important aspect of its work – unifying God’s people to accomplish the final mission entrusted into their hands.

General Conference leadership has invited members around the world to participate in the 100 Days of Prayer campaign leading up to GC Session.  We are to pray for the falling of the latter rain of the Holy Spirit on the 2015 General Conference Session.  This is the greatest work of the Session – to humble ourselves before God and receive His unifying power to accomplish God’s mission for His church.

Please pray for the delegates as they gather to conduct this most important work. It is our hope that church business conducted faithfully, hearts that are open to the Holy Spirit earnestly, prayers that are ascending on behalf of God’s people ceaselessly, minds that search God’s word diligently and hands that act in God’s love endlessly will allow us to soon see His face.

The 2015 General Conference Session theme says, “Arise!  Shine!  Jesus Is Coming!”  May this be the theme of Seventh-day Adventists meeting in San Antonio and around the world.

This article was written by the Adventist News Network reporting staff.