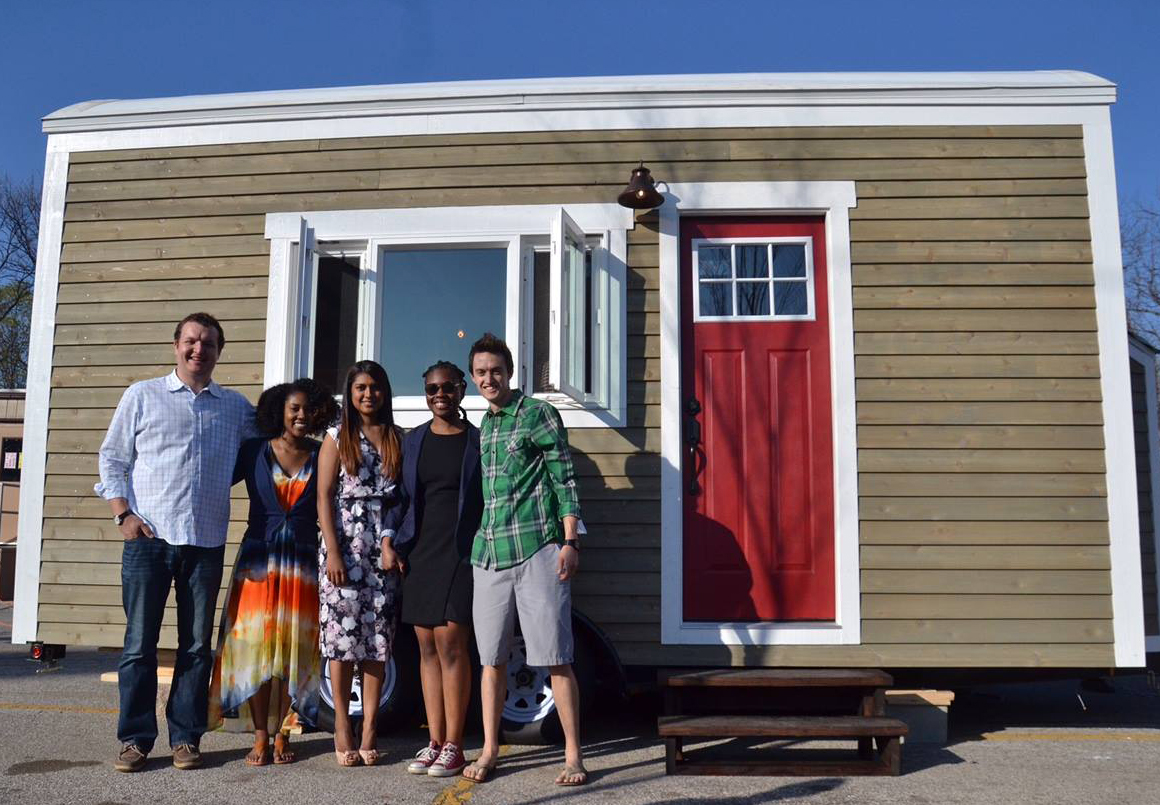 In an interview with Spectrum, Carey Carscallen, Dean of the School of Architecture, Art & Design at Andrews University, talks about the recently completed Tiny House Project and what it means for the Andrews community and beyond.

Question: What exactly is a “tiny house”?

Answer: A tiny house is a place for people to live who want a simpler life. You don’t need a lot of land or personal possessions, so it allows you to scale back and live more economically. 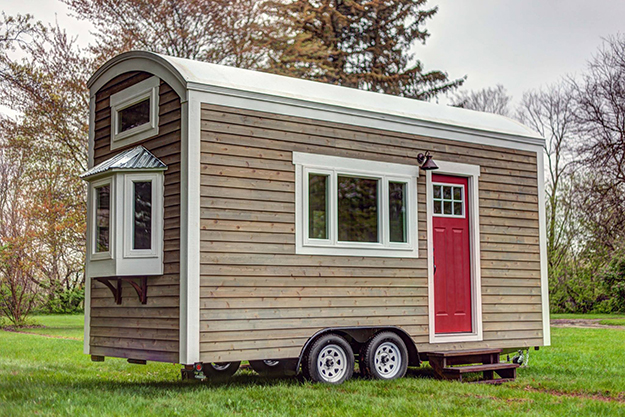 What first got you interested in tiny houses? I heard a rumor that you did your thesis on tiny houses, is that correct?

I did my thesis on the small house, which isn’t the same as a tiny house but they are similar. Living with a smaller footprint has been a long-held interest of mine, and I wanted to have something that’s hands-on in house construction for our students, so this was a good fit. We have classes in furniture design, and model making, and things like that, but to do something that’s directly related to architecture and to have something that the students can do clear through the process – from design to construction – was the goal. In Michigan, with our extreme winters, to do it on a regular building site is problematic. Doing a tiny house on a trailer, in the warehouse, where they could work year-round just made sense. And the students can still learn most of the aspects of house construction that way. Of course, you don’t do concrete foundations and footings, and that kind of thing, but from there on up, it’s the same.

Can you describe a bit about the students’ process for designing and constructing the tiny house?

We started out having them do research, which included zoning information and the legal issues surrounding owning a tiny house. What kind of restrictions there are for moving and transporting one, and all of those different aspects. Then, when it came to the design, the students had pretty much free rein. Building it on a trailer restricted the footprint, so they had to keep that in mind. They also had to work within the parameters of keeping it able to pull behind a truck without a special permit. Within these guidelines, they were able to have complete control of the design.

Did you run into any challenges or surprises that you weren’t expecting while the students were working on it?

Not really any surprises, but some of the challenges were that the students tended to want to build before they finished designing. Then they’d run into problems that they had to work through. Whereas if the design had been there first, it would have been more efficient in the construction process. The designs ended up being very original and well done as far as the space use and aesthetics. 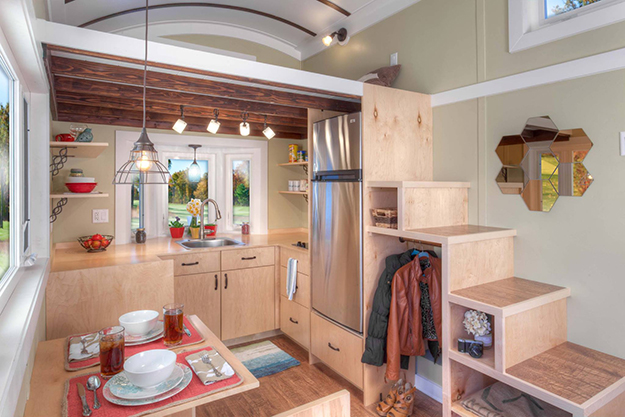 I’ve heard there’s actually two tiny houses, but only one of them is completed, correct?

Right. This was a project for our fifth year students who are in their final year of the program completing their Master of Architecture degree. So, we had the students split into two groups and each group designed and built a tiny house. The first tiny house is complete and we’re going to finish the second one over the summer. We ended up with two very different designs. The one that’s finished used more traditional house-building technique with stud walls, whereas the other one used structural insulated panels, which is plywood with Styrofoam sandwiched between. That means the walls and ceilings are all just big panels and that gave the students a lot of challenges as far as attachments and wiring. Each tiny house had such a different process; it was a great opportunity for the students to learn about various construction techniques.

What are your plans for the tiny houses, especially the one that’s already complete?

The one that’s complete is currently for sale for $30,000. As soon as we finish the other one, we’ll be putting it up for sale too. We really want to sell them and put the money back into the project and do it again with the new group of fifth year students next year.

You posted several photos of the completed tiny house on the School of Architecture’s Facebook page, and it has been getting quite a bit of attention on social media ever since. I noticed several people have been suggesting donating the tiny house to the homeless. Is that something you’d consider, or something that’s even feasible at this point?

That was part of our talk right from the beginning. We wanted to build one to give away and build the other to cover the costs of both. Then repeat that process. But when we did our initial investigations in Benton Harbor, Michigan, which is an impoverished town a short distance from Andrews, to see how and where they might be used, we found that Benton Harbor, like many other towns, doesn’t have zoning that permits year-round use of a tiny house. Typical zoning requires a minimum lot size and a certain square footage for the house. And of course, tiny houses will never meet that minimum square footage, which is usually around 1,000 sq. ft. There’s going to have to be an adaptation to the ordinances before we can continue with that plan. 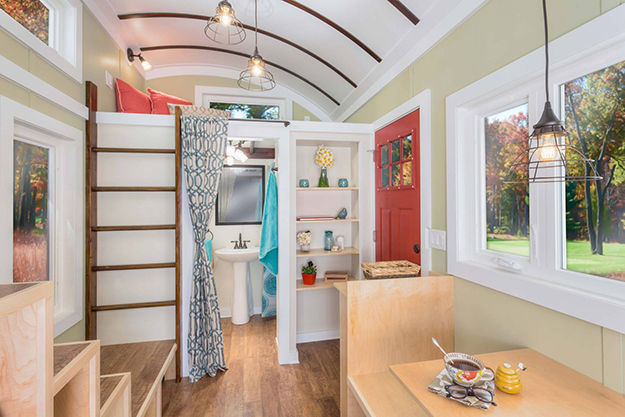 How many square feet is the completed tiny house?

The footprint is 148 sq. ft., so not anywhere near the 1,000 sq. ft. that the zoning laws require. Sometimes you are allowed to treat a tiny house like an RV and park it in your backyard, but you still can’t live in it year-round. It can’t be your primary residence.

Do you know which states are tiny house friendly?

It’s not so much states as cities. There are a few around the country. Portland, Oregon and Milwaukee, Wisconsin are a couple, and there are more and more cities that are beginning to allow for tiny houses.

I noticed one of the other comments online was suggesting a tiny house community on the Andrews campus, as an alternate housing solution for students. Does that run into the same zoning issues as you have in Benton Harbor?

You do run into similar issues, though I think it would be most feasible on a private university campus because we’re zoned differently which gives quite a bit of latitude. At this point, we haven’t made that proposal to the university yet, but it is something I’d like to do. However, that would require that we come up with additional funding to cover the costs of that endeavor. Right now, we just don’t have that kind of money. All of our plans will be greatly aided by selling these first two tiny houses. What are some more ways you’d like to see this project evolve in the coming years?

One way would be that it doesn’t always have to be a tiny house on wheels. It could be a tiny house that we take and put on a piece of property somewhere. Or, something that’s done for some other type of purpose but that’s still on the same scale as a tiny house, like creating a mobile mission clinic out of a shipping container. There are many possibilities available with this type of concept.

Tell me more about the mobile mission clinic idea. How would that work, and is it something that’s already being utilized in some places?

As far as I know, it’s not currently being used, at least not the way I’m thinking about it. I was talking to one of our friends who is a medical missionary in Chad, Africa and the idea is that we’d convert two shipping containers – one as a clinic and one as a house. Then, you decide which village you’d like to start working in, and in one day you can set up both your house and clinic. Typically, when you go into a new village, there’s nothing there for the missionary. You have to build it up. So this way, you go in with your house and clinic ready to set up, and you’re providing services from day one.

I’ve heard that the School of Architecture has received several distinguished awards over the years. Can you tell me a little bit about these awards?

We have an Urban Design Studio class for our fifth year students, and for the last 15 years or so, we’ve done a project for a community. The communities have been everywhere from Alaska, to the Bahamas, to Honduras, and several local communities as well. One year we did the master plan for the university. We submit these projects to the Congress for New Urbanism, and we’ve received five national awards over the years. We also won one award from the State of Michigan. What do you feel sets the Andrews University School of Architecture apart from other architecture programs that are out there?

Part of it is our curriculum. It is well-rounded, and it’s laid out in a sequence that takes the students from knowing absolutely nothing to being very well-versed in architecture. Another aspect of our program that makes us unique is that we teach our students that every aspect of architecture is valuable. It’s not just the design that’s going to make them a star that matters. Every piece of design has value. At a lot of schools it’s all about the “wow” factor of the design, but we’re not that way. Our students are very capable designers, but our focus is on the bigger picture. We try to instill in our students the importance of civic responsibility and we integrate community service and service to the church throughout the projects we do. Even the tiny house is another way to make the community and living resourcefully a priority.

It sounds from what you’re describing as though Christian values are entwined throughout the program and what you’re teaching the students.

Yes, absolutely. In everything that we teach, we try to instill that in the students and create that atmosphere. When we go on our Europe tour and our Waldensian tour, each day of those trips, we tie in aspects of faith that relate directly to architecture. Students come on the Waldensian tour and see that these people lived in these simple little stone huts on the mountainside and were killed because of their faith and it makes you wonder, would I be willing to die for my faith? It has a profound effect on our students.

What else would you like people to know about either the Tiny House Project specifically or the School of Architecture in general?

We want people to know about the great things our School of Architecture students are doing, both while they’re here and once they graduate. One of our recent grads, Caleb Johnson, just won the national Best New Home award by Fine Homebuilding Magazine. Another alum, Chantel Atkinson, had her house design featured on the most recent cover of New Homes Magazine. 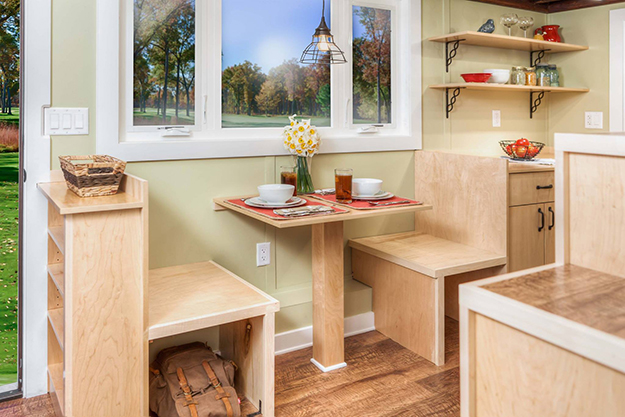 Photos used throughout the article are of the completed Tiny House, which the students have nicknamed "Bay View." Photos are by Derek Peters and Lavon Kotanko. Main photo: The student crew that built the "Bay View" Tiny House - Trevor Eller, Be'Anna Clark, Dassia Mejia, Perla Durndis, and Joey Osborne.