Perspective: What Will Africans Do With Women's Ordination?

Perspective: What Will Africans Do With Women's Ordination? 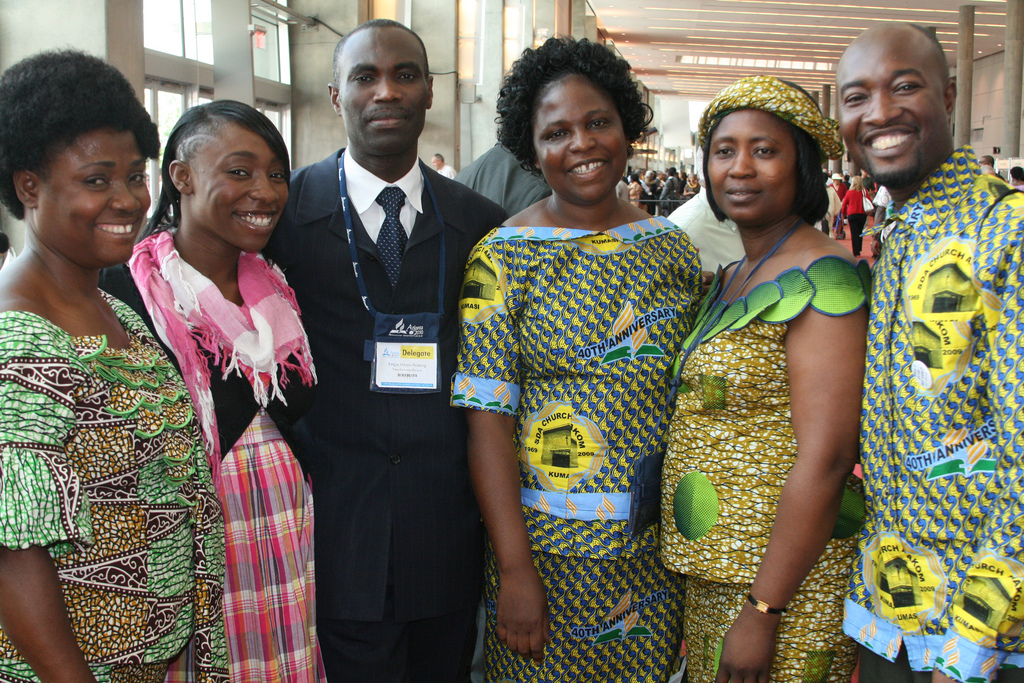 In the ongoing discussion about women's ordination in the Seventh-day Adventist Church, many have feared the possible disintegration of churches from the third-world nations—Africa in particular—should women's ordination be accepted. Most conceive of the African sociological set up as a male-dominated society.  I will say that such affirmations are false. A majority of Africans' reasons for objecting to women's ordination is common to everyone else, irrespective of where one may be. In this article, I will attempt to shed some light on Africans' sociology of gender, which is mostly misunderstood by the West. I will also outline few circumstances that have shaped Africans' thoughts on women's ordination, which makes their objection to the issue more theological than cultural.

Africa’s Sociology of Gender
Though there are intricate social and political role differences between women and men in African societies, men and women live peacefully. The harmony is so beautiful that it pervades all African traditional ceremonies such as funerals and festivals. Men exercise great authority and power in the homes. Women, likewise, exercise great authority and power over their children, and in matters relating to the political institutions, which is kingship in most African societies. The idea of male dominance and women's subjugation as inferiors never entered the African consciousness until Western ideologies infiltrated the social and political institutions. Until the arrival of feminism, men understood their societal roles, and women knew their societal roles. Role-sharing was naturally demarcated. There is an Akan proverbs that says: “When a woman buys a gun, she keeps it in a man’s room,” meaning women don’t use guns, for instance.

The authority and power of men arises as a result of the social and political stratification of responsibilities within African societies. It is the man who creates wealth for the entire family. The married woman, whose role as a wife, leans upon the husband for protection and providence. Traditionally, the wife hopes for two things in marriage: children and wealth. In some matriarchal societies, the children have blood affiliation to the mother’s clan. Therefore, the children belong to the woman. Though many African women do work tirelessly, their work is more of daily subsistence. In cases where the man’s effort is insufficient, the woman works to support the family. A man’s authority in the matrimony must not be confused with men’s authority towards other women in the society. Their authority as men is thus recognized as respect, and this is gender mutuality.

Politically, men are the opinion leaders. In many African societies, kingship is masculine. Yet a king does not rule alone. He rules with a queen mother. Men and women jointly rule society. In some communities, the queen mother exerts great influence—more than the king, for example, among the Akans of Ghana and Ethiopia. In Akan tradition, it is the queen mother who has the absolute power to legitimate one’s right to the throne. She has power to enstool and destool a king. Her opinion is final. Without her consent, no one can install a king to office. The queen mother’s office protects and ensures women’s equity and justice.

Queenship was the traditional feminist’s voice.
The idea of authority and power in African communities is not masculine absolute. Women play their roles as well as men. Though men fulfill many social and political responsibilities, their authority and power are exceeded as a result of their many roles rather than their gender. In the African context, authority and power exist in roles and responsibilities. Men’s authority is not over women alone, it is over men as well. A male child who is unmarried or married, irrespective of his age, still comes under the authority of his mother. What we often witness as male authoritarianism must be seen as an abuse of traditional values.

Looking at this background, Africa’s objection to women's ordination cannot be attributed to sociological reasons. In my own observation of the various arguments among Africans, the issue is far advanced from sociological contexst. The few who dare to make it a contextual issue do not say so loudly since such positions are subjective and would be branded misogynistic.

So what have been some Africans’ problem concerning women's ordination? Before outlining possible problems, I would like to point it out that the objection to women ordination in Africa has not been a talk of men alone. Many women, for many reasons, object to women's ordination, while others are never convinced of any biblical explanations for prohibiting women's ordination, as long as God has mightily used women in the history of His people. So the opinions are not homogenous.

The influence of lay preachers
In Africa, lay preachers are very influential. Some of them are even more influential than church pastors. Many of them are the Bible workers and church planters. Like Paul, their words become reference points. The status that has been acquired by the laymen over the years makes their positions on doctrinal issues authoritative. Their deep knowledge about biblical texts strengthens their authority.

In the late twentieth century, many Adventist leaflets came to Africa. Most of them were from Adventist independent ministries. There was such strong emphasis on Ellen White’s writings that they became almost more authoritative than the scripture. Most of the laymen read the majority of these leaflets and became very conservative about what supposedly was true Adventism.

Literal reading of scripture
Literalistic reading of the Bible contributed to the way Adventism is practiced. Many of the early pastors received pastoral training rather than theological training, and even those who did theology could not break away from their fundamentalism. Many of the pastors who tried to curb some of these erroneous literal readings of scripture had serious problems with the laymen.

Misinformation of church affairs
Between 1990 and 1995 when the issue of women's ordination became a big issue within the Adventist Church, many laymen saw the shift as an attack of Satan against the church. I remember very well that some laymen advised us to pray for the church because it was becoming apostate. To the laymen, it was not about what one thinks about the issue. Neither did they see the issue as being about doctrinal accuracy. It was simply a non-starter. By their sharp refutation and call for prayer against the issue, many church members, out of ignorance, were induced to follow suit.

The rise and influence of Pipim
Samuel Koranteng-Pipim is one of the preeminent scholars the church in Africa has produced. He has been a blessing to the Adventist churches in Africa as well as the Adventist church in general. His own issues and weaknesses must be seen as a condition that happens to many people. The same way Peter was struggling with ethnic hypocrisy or Paul struggling with his ego, and many of the church fathers too struggled with theological idealism, so Pipim also as a human being had his own issues and weakness.

Pipim’s methodology is very simple: The Bible is the inspired Word of God. The Bible’s plain utterances must not be compromised with human sophistries. Pipim is a passionate preacher who speaks with power and great authority. He rose as “one-man-thousand” waging theological warfare against contemporary torrents of liberalism and intellectual philosophies, as he understood them.  Pipim’s books, "Receiving the Word" (1996) and "Must We Be Silent?" (2001) summed up his theological ideals nicely.

By the turn of the twenty-first century, Pipim’s fame had already spread across the borders of Africa, especially among the Anglophone states. His persuasive DVD PowerPoint presentations captivated the attention of the youth. His book, "Must We Be Silent?" received great attention as he and like-minded authors discussed sensitive and controversial contemporary issues facing the Adventist Church such as methods of biblical interpretation, women's ordination, and homosexuality.

Many of the pastors and laymen in Africa who began reading Pipim’s books came to be fascinated by his profound knowledge in dealing with such complex issues. The weight of biblical passages in his writings and the coinciding of his views with those of the typical African congregation on the issue made it much easier to embrace his ideas without question; he was seen as the Paul of our day. His book, "Must We Be Silent?" became the reference point in the case against women's ordination. His exposure to Adventist students, including theological students, reinforced his authority in Africa. In sum, Pipim's arguments against women's ordination carried a great deal of clout. Such reliance is natural with human beings.

A matter of theological disagreement
Authority and power overlap in Africa’s gender roles and responsibilities. Though men’s authority may supersede that of women because of their social and political roles, the traditional conceptual context does not provide enough argument against women's ordination. Such an attempt would have to be taken on face value or a generalization of some unethical behavior of few men’s authoritarianism. Any male authoritarianism must therefore be seen and criticized as a deviation from traditional values, not only in Africa, but as is commonly suffered by many women in world societies.

I conclude that many Africans' positions against or for women's ordination must be seen as theological. While some have been influenced by lay preachers and others at the end of the twentieth and early twenty-first centuries by the writings of authors like Pipim. It must be well noted that Pipim, in all of his voluminous studies on the subject, never attributed people’s convictions against women's ordination to sociological factors. He definitely emphasized that the issue has always been considered on theological grounds.

So what will Africans do should women's ordination be legitimated? Nothing! Contrary views aside, Africans are more open to the unity of church, perhaps, even than the West. For more than 125 years of Adventism in Africa, no offshoot has sprung from the continent and been successful. Those who even brought some to the continent are finding it hard to maintain progress.

Should someone ask me if there will be disintegration in Africa in case women's ordination is accepted by the church, my answer will be simple, “NO!”

Note: This article originally contained a paragraph noting that certain participants in the Theology of Ordination Study Committee from Africa were open to the idea of women being ordained. After those details were called into question, the author asked that the paragraph be removed. - Ed.

Clifford Owusu-Gyamfi, originally from Ghana, is pursuing a Master's of Theology degree from the inter-faculty universities of Lausanne and Geneva, Switzerland.