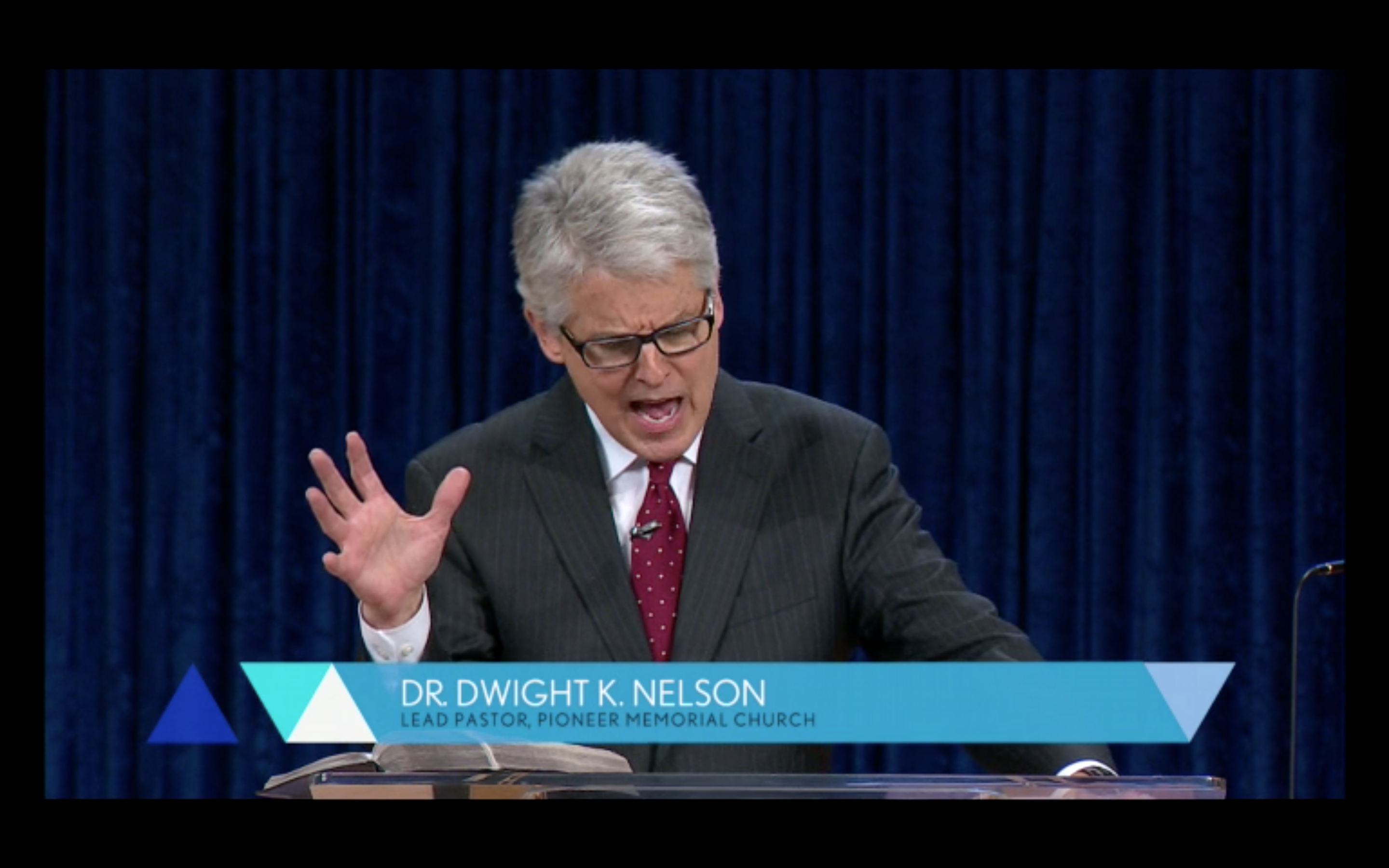 During his January 17, 2015 sermon entitled “Why I Believe in the 1,000 Man March After Ferguson,” Pastor Dwight K. Nelson, senior pastor at Pioneer Memorial Church, called for an end to ethnically separated conferences in the Seventh-day Adventist Church. Shortly afterward, a petition from Pioneer Memorial Church to the North American Division of Seventh-day Adventists went up on Change.org.

Nelson's sermon on the weekend of Martin Luther King Jr. Day was part of a series at Pioneer Memorial on the Adventist pioneers entitled "Stories in the Rearview Mirror." It was not the first time Pastor Nelson took the MLK Day weekend as an opportunity to decry regional conferences. In 2010, he preached a sermon entitled "The Truth in Black and White" with a similar message.

In this year's "Why I Believe" sermon, Nelson invoked the spirit of the Adventist pioneers, whom he described as young social activists. Recalling how Harriet Beecher Stowe lit the social conscience of the Adventist pioneers' generation on the injustices of slavery, Nelson turned to recent events in Ferguson, Missouri and in New York State in which protesters demonstrated against racial injustice and police brutality. Nelson noted that the Adventist Church has had a tough time knowing how to handle race relations in the post-slavery era--from 1865 to today.

Nelson quoted a letter on race relations from Ellen White, in which she described a "high partition" built by white Adventists between themselves and the "colored race."

Then he turned to ethnic conferences within the Adventist denomination and questioned whether their presence points to the continuation of a partition separating church members.

"I need to be candid with you, and I need you to hear the heart more than the lips. Could it be that we are still building a high partition in this movement of faith? Do separate conferences and separate congregations demonstrate this Bible appeal on the basis of self-sacrificing love?" he asked rhetorically.

"With American society racially fragmenting in front of our eyes, how persuasive is church organization that depends on 'separate but equal' still, when the nation long ago abandoned it? How can we appeal to a fragmented society on the basis of love when we ourselves are fragmented?"

Retelling a story he heard from a student of Andrews University about growing up in a black conference and being surprised to find out there were white people in the Adventist denomination, Nelson said, "Guys, somebody is keeping a story going that needs to stop! Stop that story! It's time to write a new one."

Nelson invited the congregation to join him in a 1,000 man march in Benton Harbor, a predominantly black community near Berrien Springs. Benton Harbor had the lowest per capita income of any city in Michigan in the 2000 census. Marchers were bused from the Andrews University campus to the Benton Harbor march on Martin Luther King Day.

At the close of his sermon, Nelson asked the congregation to fill out response cards with three options:

1. Pray for race relations in America.
2. Join the march in Benton Harbor on MLK Day.
3. Through email and social media, appeal for the organization of conferences that model racial unity on the basis of love.

In his closing prayer, Nelson said, "O God, this is your character on the line. Why would a nation ever go to a church that is fragmented?"

One day after Nelson delivered his sermon, a petition appeared on Change.org calling for the integration of racially divided conferences.

In the Seventh-day Adventist Church in the United States there are church conferences that are organized on the basis of ethnicity.

For example, predominantly white churches in the state of Michigan belong to the Michigan Conference of Seventh-day Adventists.

Predominantly black churches in the state of Michigan belong to the Lake Region Conference of Seventh-day Adventists.

But what if instead we chose to organize churches and conferences based upon the unity Jesus prayed for in John 17—“that they may be one as We are one”?

Changing long-held customs and practice is always a difficult undertaking. But the Holy Spirit in the Book of Acts has shown Himself well able to guide the minds and decisions of leaders to make radical change for the growth of Christ’s Kingdom and the triumph of His love.

Adding your name to the list will speak loudly to the church that it is high time we all come together “on the basis of love” (Philemon 9) and model to society the unity that only Christ can bring.

Reactions to the petition on social media have been mixed. In a public comment on Facebook, David de la Vega wrote, “The subtle racism that many of us ignorantly experienced not only shaped today's leadership but also segregated the church. Unless we acknowledge the racism of the past we will only deny its presence today and allow its legacy to continue. The question is, have we become so accustomed to the segregation in conferences, schools, churches, and family values that we see no need to change them?”

Jason O’Rourke expressed his concerns in the petition’s comment section, “Separated conferences is a manifestation of the racism which birthed them. Changing the structure is only one step in ending the racist bias still prevalent within our church.”

Richard Davisson, another petition commenter, wrote, “I believe that we as a church should be Christ-like examples of love and acceptance. I think that having separated conferences based on ethnic background suggests that we are living in the past of "separate but equal." With the racial discord that is present in our society, our church needs to be an example of unity and love within diversity.”

Dwight Nelson was among those signing the petition. He commented alongside his signature, "I'm signing this because the time has come at last to live out Jesus' radical command to love one another that we may be one in Him. I hope you will join me."

The petition calls for 1,000 supporters, and as of this article's publication, appeared set to reach its goal.

While the petition and agitation from Pastor Dwight Nelson seemed aimed primarily at the black-white racial divide (there were no calls for disbanding hispanic, asian, or other ethnic churches where immigrant communities predominate), notably absent from the discussion on the petition site and on social media were black voices. Those sharing, liking, and commenting on the petition on Facebook were overwhelmingly caucasian individuals, followed--distantly--by hispanics.

Black Adventists have not demonstrated the same eagerness to do away with ethnic conferences and congregations. In 1995, Delbert Baker (now serving as General Conference vice president) wrote in the Adventist Review that, "Regional conferences have positively changed the face of Adventism, and made notable contributions to every facet of the church's ministry."

In 2008 after the election of President Barack Obama, Pastor Fredrick Russell (an African-American Adventist) wrote in the Review that it was time to do away with regional conferences. He said then,

Like other denominations that have traveled a similar path as ours, we will at some point need to disassemble the last symbols of our historical divide—racially segregated conferences in the United States. Let me quickly say that there are more than nine racially defined conferences in North America; the majority of conferences in the United States are racially defined at their core. That doesn’t mean any deliberate intent on the part of any conference to discriminate. But it does represent a reality that facilitates a racial divide.

[T]he unvarnished reality is that there are more Black families living in separated neighborhoods and a lesser percentage of Black students studying in integrated grade schools now than there were 54 years ago when “separate but equal” was repealed in the famed Supreme Court case Brown v. Board of Education. It is both inaccurate and inefficient to superimpose the Christian and secular liberals’ construct of “social ought” upon the pervasive “is” of American sociality and function “as if” the day of general racial acceptance has come. Such a position is delusionary, and destructive to mission in the Black community.

Adventist writers or speakers have described the existence of Regional Conference structures as “race-based organizational segregation,” “Adventist apartheid,” “the sin we don’t want to overcome,” “an abnormality” “a disgrace.” “morally untenable,” and “a lingering evil.”

In NAD, mission primacy for reaching the 37.6 million African-Americans in NAD has been delegated to Regional Conference ministries. The present structure therefore, is the tool used to facilitate that mission to deliver the SDA message.