Why We’re Wrong about the Samaritans 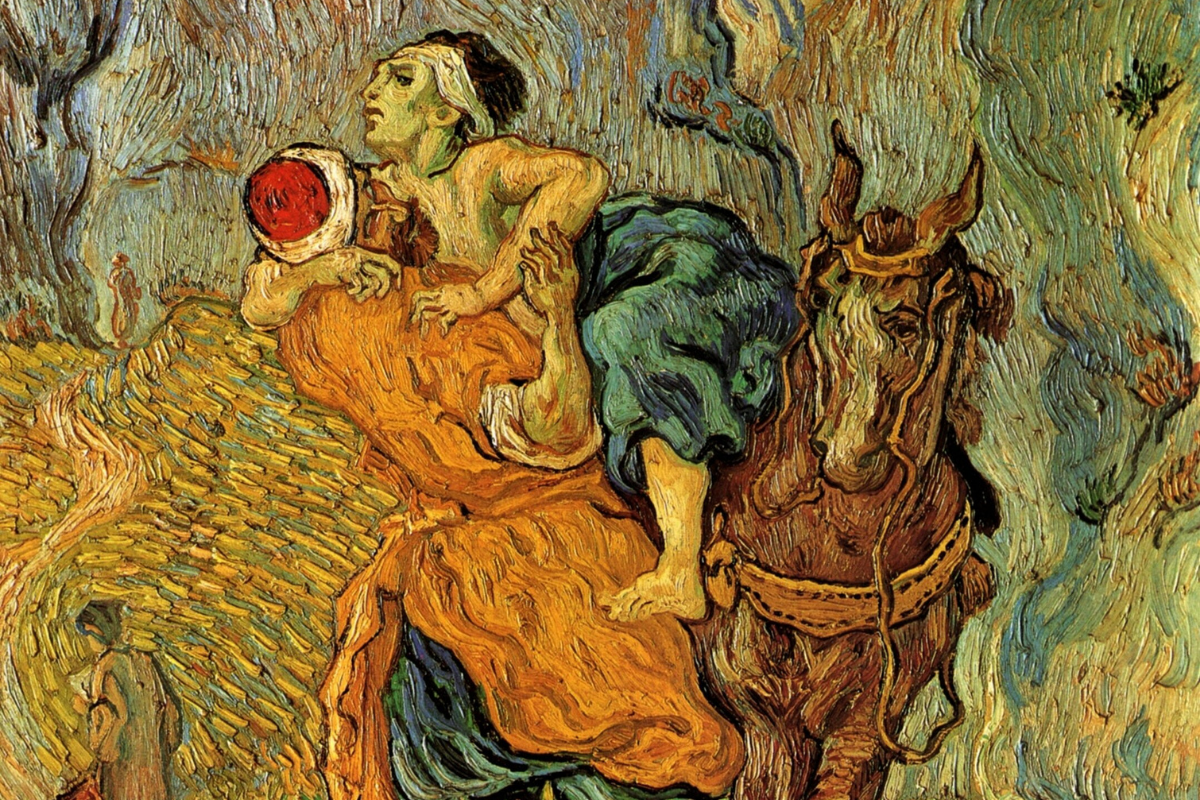 The story goes that Jesus tries to answer the question “who is my neighbor.” He tells of a man who is assaulted, and three passers-by. A priest passes, a Levite passes, a Samaritan doesn’t pass. The Samaritan takes care of the man. The usual interpretation is that there is an irony here. The parable is oxymoronic—it’s about a good Samaritan.

Don’t we all know that Jews disliked Samaritans? It's a commonly held self-evident truth. It’s in the Sabbath school quarterly. The June 9, 1894, lesson explains that ”the Jew had no claim upon the Samaritan. . . They regarded the Samaritans as dogs.” The May 28, 2015, lesson keeps this view alive: “Hatred and animosity marked the relationship between Jews and Samaritans, and by the time of Jesus the enmity between the two had only worsened.” The Desire of Ages tells us that if the roles were reversed, with a Samaritan wounded and a Jewish person passing by, “the man would spit in his face, and pass him by with contempt.” I, too, long held this conviction—until, that is, one of my students decided to write a dissertation on the Samaritans!

It seems that the narrative of hatred between Jews and Samaritans is a myth. It’s fake news. Biblical interpretation, like every other field of knowledge, is full of myths. There are many things people consider to be almost self-evident truths that when we look more closely do not hold water. Or at least are up for grabs.

I call these things myths, but you could also call them fallacies or tradition. Some are rather innocent and are probably not theologically challenging, like the common assumption that three magicians visited Jesus. Some may be disappointing, like that the increased prominence of women and emphasis on their rights in the New Testament had much more to do with innovations in the Roman Empire than with Christianity or Jesus’s teachings.

The Samaritans, it seems, have been subjected to one of these myths of interpretation, a myth with a long journey through history, including an important stop in Nazi Germany.

Who Are the Samaritans?

Up to this day, there is a group of people in Palestine who identify as Samaritans. They are the descendants of the ancient community that worshipped YHWH on Mount Gerizim, about 50 kilometers north of Jerusalem. The ancient community of Samaritans read the Samaritan Pentateuch, a text extremely similar to the Torah, but resisted reading other ancient texts as Scripture. They self-identified as children of Israel who kept the true faith in the Lord God. They find their origins in a split when the priest Eli set up an altar to God in Shiloh.

Second Kings 17 is probably the only Old Testament text that explicitly mentions the Samaritans. Here we read about the fall of the Northern Kingdom to the Assyrians. The Israelites are deported to Assyria and people immigrate from other places to live in Samaria. The chapter repeats three times that the Lord removed Israel from the land, giving the impression that the land is empty before these foreign immigrants come. This reminds me of the Apartheid propaganda I grew up with: the obviously false myth that Southern Africa was empty before Europeans colonized it. More likely is that a large portion of the Israelites stayed behind and immigrants from the rest of the Assyrian empire settled there as well. These “new” inhabitants of Israel appear to keep the long-standing tradition alive of worshipping other gods besides the Lord. The text summarizes that “they do not worship the Lord and they do not follow the statutes or the ordinances or the law or the commandment that the Lord commanded the children of Jacob, whom he named Israel” (2 Kings 17:34). Do note that the Bible holds these “new” Israelites to the same standards as the “children of Jacob.” Though 2 Kings is a little unclear regarding some details about these inhabitants of Samaria, it seems that they are meant to keep God’s covenant with Israel and are probably the descendants of Jacob mixed with other nations. Not much hatred and enmity here!

Second Chronicles is clearer. There these people are called the descendants of Ephraim and Manasseh. They renew their covenant with “the Lord, the God of their ancestors.” Elsewhere they are part of religious reforms and even celebrate Passover in Jerusalem. Again, these are not enemies of the Jewish people but part of the Israelite nation. Admittedly, Ezra and Nehemiah might reflect a different attitude. The adversaries of those returning from Babylon might be Samaritans, but they are never called that. The assumption that they are Samaritans seems to be based on the fact that they worship the same God as those returning. But Ezra and Nehemiah take place in the Southern Kingdom, not Samaria. So, the general trend in the Old Testament is that the Samaritans are part of the God-worshipping Israelites, though there is some difference, and maybe in Ezra and Nehemiah some evidence of animosity.

I don’t want to get lost in the minutiae of ancient opinions, but trust me that in New Testament times there still were these two sides to how Jewish texts portray Samaritans. Both in the New Testament and in the Jewish historian Josephus, there is acknowledgement of some difference between Jews and Samaritans. But hardly any evidence of them seeing each other as dogs, enemies, or wishing to spit in the other’s face. So, where does this pervasive myth of ancient animosity come from?

The first real sign of a sustained emphasis on hatred towards the Samaritans comes from sixteenth-century Swiss Protestantism. The Geneva Bible of 1560 has a footnote about the Samaritans being “odious,” and Calvin’s commentary on the Gospels mentions the “deadly hatred” of the Jews. Calvin’s interpretation relates strongly to his context, where he identifies his religious opponents as similar to the priest and Levite in the story of the good Samaritan. These religious authorities should have done better, just as Calvin feels the religious authorities in his time should have done better. Calvin’s invention of the despised Samaritan became widely adopted, but without the religious context. Among scholars and lay members alike, Calvin’s concept of Jews despising Samaritans became a historical fact.

Now, Calvin talked about dislike based on religious difference. But this changed to dislike on the basis of ethnic difference and racial purity in the early 20th century. In the 1920s and 30s, a German scholar by the name of Joachim Jeremias published extensively on the Samaritans. (He did this in German of course, but I will refer to the English translations as that is what influenced English scholarship.) His 1923 book Jerusalem in the Time of Jesus remains in print to this day, and his contribution on the Samaritans to the often-read Theological Dictionary of the New Testament is extremely influential. Before you ask, Jeremias was never a member of any Nazi group and spoke up against Aryan theology in Germany. But the Theological Dictionary was edited by a Nazi and many articles were written by Nazis. To quote Maurice Casey, “The mildest contributors to the early volumes had German Christian prejudices: the most menacing were Nazis.”

And this is clearly the case with Jeremias’s work; the influence of scientific racism is all too apparent. That is, if one were to look more closely. Take, for example, the final part of his book. It is titled “The Maintenance of Racial Purity.” In this section, he puts ancient people in Palestine on a scale. From “Israelites of pure ancestry” to the Samaritans, who are the “lowest degree on the scale.” He explains that the Samarians were Judeo-Gentile and that the Jews looked on this “mixed race” with contempt. In his article in the Theological Dictionary, he repeats these racist opinions talking about “the attitude of Jesus to the members of this despised and hated mongrel people.”

Jeremias’s highly problematic views are still extremely common in academic studies on the New Testament. In major commentaries—written in the last decades!—we read phrases like Francis Moloney’s “a mixed and apostate race” or “people of mixed blood,” D. A. Carson’s “racial half-breeds,” or Ben Witherington III’s “at best half-breeds.” The influences are also found in the Seventh-day Adventist Bible Commentary, where the Samaritans are called “halfbreed[s].”

While I don’t know the personal opinions of these contemporary Bible commentary authors, I strongly doubt that they are strong believers in maintaining racial purity and avoiding mixed marriages. Yet at the same time, we see the dangerous way that racist thinking can color interpretation. The explicit racism of Jeremias has fallen by the wayside, but implicitly the effects remain. A huge bias against Samaritans has been pervasive in Bible interpretations, and only very recently have these been challenged by some biblical scholars.

As it stands, the relationship between Jews and Samaritans was probably complicated in the time of Jesus. There must have been tensions, as there are between all people groups living close to each other. But there is little evidence for hatred and animosity, let alone spitting in one another’s face. This means that the stories about Samaritans in the gospels need reconsidering, without the implicit racial bias that we inherited from Nazi Germany. How exactly we should now read these stories is still up for debate, but one thing is clear to me: the old ways are no longer acceptable.

Reflecting on this, Ellen White’s famous words come to mind: “We have many lessons to learn, and many, many to unlearn. God and Heaven alone are infallible. Those who think that they will never have to give up a cherished view, never have occasion to change an opinion, will be disappointed.” I am once again reminded of the power of critical thinking to help us identify the opinions that need changing.

I am indebted to my former student Dorothea Relić Macedo for challenging my understanding of the Samaritans with her amazing master’s thesis: “The Israelites on the Other Mountain.”

A large part of this discussion is based on Matthew Chalmers’s recent work on the Samaritans, such as: Rethinking Luke 10: The Parable of the Good Samaritan Israelite, Samaritans, Biblical Studies, and Ancient Judaism: Recent Trends, Viewing Samaritans Jewishly: Josephus, the Samaritans, and the Identification of Israel.

We invite you to join our community through conversation by a below. We ask that you engage in courteous and respectful discourse. You can view our full commenting policy by clicking here.