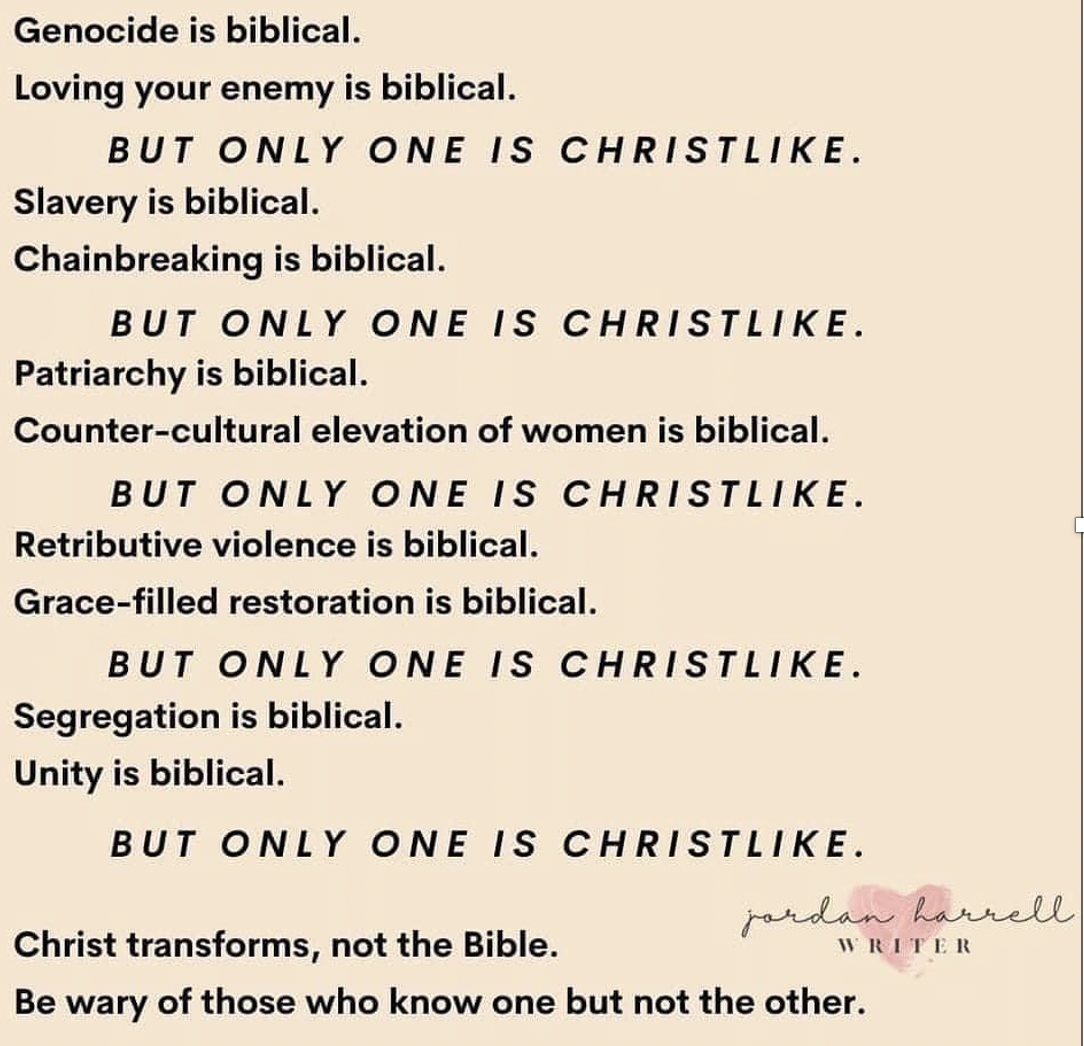 There’s a meme doing the rounds on social media. It is a list of two polar opposites, like slavery and chain breaking, or segregation and unity. The meme claims both are biblical, yet only one is Christlike. It keeps popping up on my Facebook and Twitter feeds, and all I can say is "thanks, I hate it."

This entire way of thinking reeks of Christian exceptionalism and Judeophobia, but that is probably a topic for another day. Let me just say what I have told my students many times, if Christianity is so great, why would we need to stigmatize Judaism to prove it? If Christ is so transformational, why do we need to claim that the Bible is not transformational to prove it?

The other reason I hate it is because it’s simply not true. The things in the meme that supposedly put “biblical” versus “Christlike” are not correct. They are based on a simplistic and selective presentation of both the Bible and the words of Jesus in the Bible. Sure, genocide is biblical, but it’s also strongly condemned. Retributive violence is biblical, but it’s also not. These statements are only true if you selectively read the Bible. Others are just patently untrue, like segregation being biblical. Even apartheid theologians had to get very creative with the Tower of Babel story to get there.

At the same time, making the opposite claims about Jesus also requires selective reading. Take the topic of slavery. Jesus does not speak against slavery, nor does he free any enslaved people. Indeed, he seems to support the physical abuse of enslaved people. Seeing as Jesus never breaks a chain, it might be more correct to say that chain-breaking is biblical, but slavery is Christlike!

I think a mature Bible reader should be able to spot these inconsistencies and the poor way it frames God’s enduring revelation to humans. What many might not be able to spot without the help of an academic historian are the problems with what the meme calls “counter-cultural elevation of women.”

There is an absolutely amazing book written by Sara Parks called Gender in the Rhetoric of Jesus. It’s completely unaffordable, which is sad because it is very readable, even for a non-academic. Parks’s book looks at something unique to Jesus’s preaching: his gender pairs. You might have never noticed them, but Jesus has at least eight parallel parables that are gendered.

Let me give you an example. When Jesus is talking about care for things that are lost, he tells two parables that are almost exactly the same. He tells us about a man who has lost one of his 99 sheep, then he tells us about a woman who has lost one of her 10 coins. The second story does not tell us anything new. Jesus could have just as easily left out one of these, as they both tell us the same theological message. And that is exactly what Matthew does, he only repeats one of these stories, not both.

Once you know what to look for you see these all over the place. The kingdom of heaven is like a plant and it’s like dough. Jesus talks of widows in the time of Elijah, and lepers in the time of Elisha. The birds don’t sow, but are fed by God; the lilies don’t spin, but are clothed by God. There is a persistent friend who won’t take no for an answer, and there is a persistent widow who is similarly stubborn. And the list goes on.

Time and time again Jesus goes out of his way to include women in his preaching. This shows that Jesus clearly wants male and female to be equal. In some places, that is. When it comes to religion and spirituality, Jesus sees equality there. The same for mission and salvation: men and women are equal. But, and this may or may not have been immediately obvious from the examples given, Jesus retains the socially gendered roles of the time.

Think about it, why are the lilies that don’t spin an example of a female gendered parable? Why is the woman who lost something in her house, cleaning? Why is sowing a mustard seed an example for the male audience, while baking bread is the example for women? All of these examples reinforce social gender roles: men go out and work, women stay at home and cook and sew.

In other words, Jesus is both radical and conservative. He radically includes women in preaching and the kingdom, in ministry and mission to the lost. But he doesn’t overturn other social norms when it comes to the roles of women and men in society.

“Now, Tom,” I hear you thinking, “surely all this means that Jesus does counter-culturally elevate women? At least in some aspects!” Well . . . no, not really.

Gender in the Time of Jesus and Beyond

These examples, among others, show us that Jesus radically included women in ministry. But, and this is the key question, was this counter-cultural or the norm? I know we have all learnt that women had no rights in first century Palestine, but is this historically accurate? This is where I really learned the most from Sara Parks’s book. She surveys many Jewish, Greek and Roman texts from the time, and shows that Jesus is doing the exact same thing that the rest of society is doing:

“Jesus of Nazareth,” writes Parks, “indeed inspired an early Jesus movement tradition of women’s rhetorical and literary inclusion in gendered pairing, but not within an otherwise barbaric wasteland: the discussion of various ways in which women could be considered equal were happening elsewhere as well” (145).

In other words, the first century world was involved in a debate on the role and place of women. People were exploring what equality there could be between men and women, and Jesus was simply taking part in this debate. In fact, Jesus’s inclusive religious community could only exist because of the social reforms that had already taken place in the Roman Republic and in Judaism. This means that the narrative that we have constructed, that Jesus counter-culturally elevated women, is simply incorrect. Even worse than being incorrect, it does the same thing all the others in the list do: unfairly stigmatizes Judaism.

For me, the most important part of this whole discussion is the question: what happened to Jesus’s religious gender equality? If Jesus, and the first century in general, allowed so much room for women, what happened? Well, and this answer is hard to hear. Christianity happened.

In the early first century we have a staggering amount of evidence of women in Christian leadership, but that did not last long. In fact, as Christianity developed, women’s agency and power declined. As Christianity matured, from a small group of radical, itinerant apostles in Palestine, to a wide-spread, loosely connected scattering of communities throughout the Mediterranean it conformed more and more with patriarchal culture. And then it started to enforce it.

Women were pushed more and more into socially acceptable roles, and Christians were working hard to undo the women’s liberation of the first century. Theologians began to blame Eve, and then all women for the existence of sin. Preachers warned men how all women were temptresses. And by the fourth century, famous theologians like Augustine wonder if women have any use except procreation.

As far as I’m concerned, memes like the one shared do much more harm than good. Their very existence is based on creating a difference, a separation, a split, a schism. The whole idea behind this thinking is reinforcing a worldview of us-versus-them. And, naturally, that everything we do, think, believe is perfect and wonderful, and everything they do is bad. I don’t think anything good has ever come from this kind of thinking, but I can name scores of “-isms” and “-phobias” that have!

If we really want to talk Christlike, why not celebrate the strengths of those that are not-us? Didn’t Jesus call for his followers to love their enemies and pray for those that persecute them? Why do we need to bring others down, to try to bring ourselves up?

And honestly, a good hard look at ourselves couldn’t hurt as well.

A large part of this discussion is based on the book mentioned above: Sara Parks, Gender in the Rhetoric of Jesus: Women in Q (Lanham: Lexington Books, 2019). To hear more of her research, I strongly suggest this podcast and this interview.