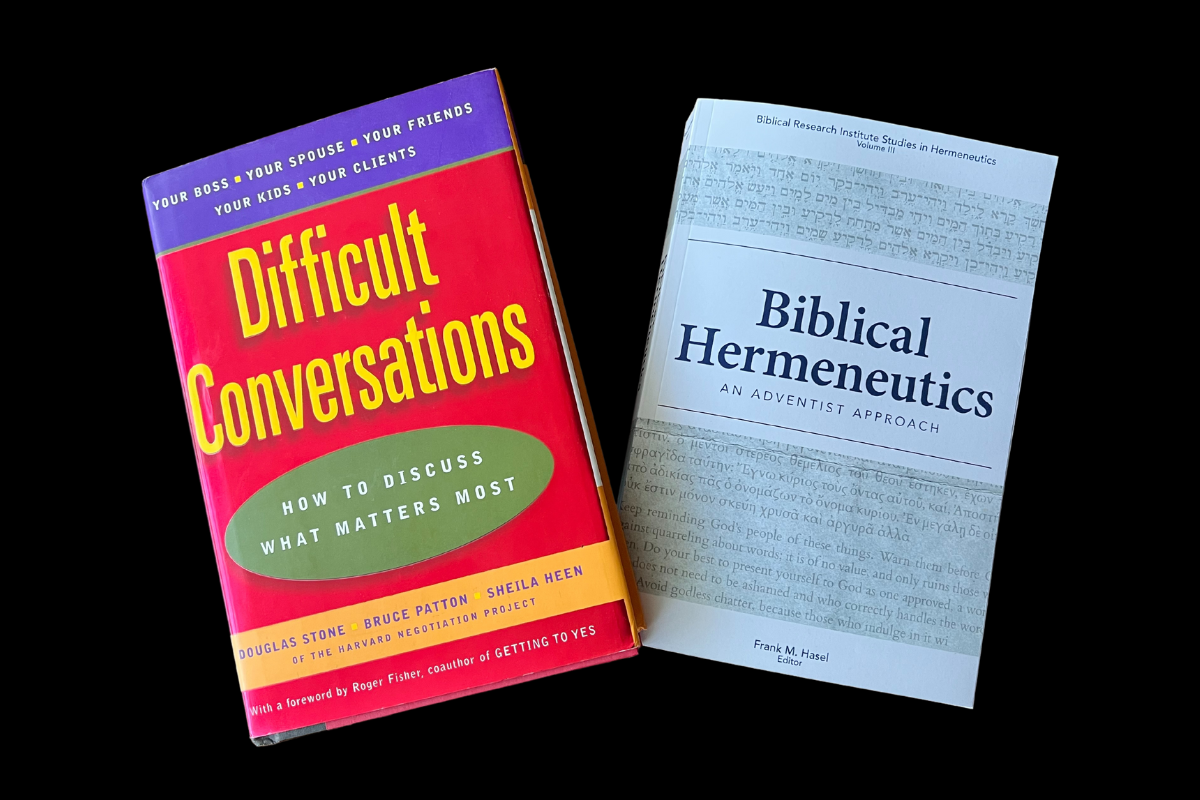 Some years back, when my wife was training to be a mediator, she was introduced to a book titled Difficult Conversations. She found this material to be both excellent and more generally useful than being limited to a professional setting. The book considers how people, in various interpersonal contexts, can more productively approach issues that are really hard to deal with. These are difficult conversations because there is a high danger for discord and, thus, a big downside relational risk. Typically, we humans are seriously conflict-averse and thus too often allow simmering, unresolved problems to keep floating around forever. Because my wife was especially impressed with the book, she encouraged me to read it. I did and reached the same conclusion.

While the book’s context was interpersonal, it can also apply to difficult organization-level conversations. And (sadly), I think the material is very relevant to festering issues within Adventism. This past summer, I read Gil Valentine’s new and excellent book: Ostriches and Canaries, which largely focused on Robert Pierson’s General Conference presidency (1966–79). I found the book to be a depressing account but additionally interesting as I lived through that time as an adult and remember the institutional stress and damage. To those unfamiliar, Pierson sincerely and relentlessly fought against external ideas he felt were dangerous to core Adventism and its end-time mission. But history has proved him (arguably, of course) both shortsighted and unsuccessful in his quest to “protect” the church from outside ideological challenges. Now, flash forward to today and examine the rhetoric of current General Conference President Ted Wilson. To me, it’s almost as if he is a carbon copy of Pierson. Same issues, same fight to insulate Adventism.

Whatever your personal views might be across the Seventh-day Adventist theological spectrum, I think it’s hard to favor this Pierson/Wilson approach. The external world and the issues raised that affect historical Adventist positions just won’t disappear and cannot be willed away, no matter how passionately any church leader might exhort the “faithful” to turn a deaf ear. So, isn’t it better to have some serious, albeit obviously difficult, conversations to address them? Demonizing and burying are not just pragmatically failing tactics; they ultimately are not really ethical.

Some readers may understandably be a bit in-the-dark about what specific difficult issues I have in mind. So let me give you a (no doubt incomplete and/or under-explained) list.

1.  Women’s equality: This manifests most publicly, painfully, and controversially in whether women pastors should be ordained. But underneath is the issue of whether so-called “male headship” is biblically valid or not.

2.  Same-sex attraction: The Bible contains multiple “clobber verses,” a label the pro-LGBTQ+ constituency favors, and so-called because the material is unequivocal and harshly condemnatory. But the issue is whether Paul (mainly) is applying his words to what, in modernity, is the full-range of homosexual contexts. Does he address a committed, lifetime monogamous relationship? And crucially, is most same-sex attraction physiologically grounded, or is it purely willful thoughts and acts? If it is rooted in physiology, how could God condemn that which is according to what is natural for that individual? Now, if Paul is viewed sociologically, it’s highly doubtful he would have had knowledge of anything besides the Greek model—basically hetero men having sex with teen boys. But (again) a theological issue underneath is whether biblical inspiration mandates that Paul was not, or even could not, be writing from a culturally limited perspective.

3.  Age of the Earth: Adventist Fundamental Belief #6 nails this down hard in support of ~ 6000 years, consistent with what is called young earth creationism. Reasons include the presumed necessity of a literal creation week to definitively prove the Sabbath doctrine. But even more significant is the issue of death before sin and the deeply distressing specter of theistic evolution. This is considered fatal to the idea of a good God because it seems to necessitate a creator who would use suffering and death as mechanism.

4.  Role and authority of Ellen White: This has been deeply contentious as far back as the 1919 Bible Conference. Then, during the 1920s, a fundamentalist ideological expansion within Adventism reinforced member perception that Ellen White’s writings were inerrant. And this appears to be the foundational view of Robert Pierson, as detailed in Valentine’s book. Adding to the difficulty is the quantity of her writing, often interpreted in inconsistent ways, giving her the so-called “wax nose.”

5.  Biblical hermeneutics: This is a complex and contentious topic, perhaps even more so among conservative/fundamentalist evangelicals beyond Adventism. Many Christians tightly adhere to biblical inerrancy. Adventists support “thought inspiration,” but that doesn’t fix up issues of how universally the material should be applied. And, whatever sort of inspiration one might assign to the Bible, members are pretty good at being blind to the interpretive problem—i.e., that readers (us) are necessarily fallible in understanding the text.

I also note that my above list is partly hierarchal. Items numbered 1–3 “sit” on top of #5. And one could view #4 as a theological subset of #5. In other words, specific problems turn on the more foundational questions of how Christians approach the source material. This is likely why Ted Wilson has been so adamant about condemning higher criticism, as it seems to violate some presuppositions he finds necessary for correct understanding. (But I think his view is quite problematic, as I considered here.) This core subject of hermeneutical norms and approaches especially applies to understanding Genesis. Believers have an undeniable (and totally understandable) tendency to read a culturally-distant Bible with “modern eyes,” which can and does result in misinterpretation.

One synonym for a liberal is a “progressive.” This suggests, of course, that change is acceptable and even welcomed. Some synonyms for conservative are traditionalist, orthodox, or historical. Each reflects an aspect of valuing the status quo. And, as in politics, these terms (or more pejorative substitutes) are often used to negatively convey views being held by someone you disagree with. None of this is conducive to having constructive, albeit difficult, conversations. At the denominational level, depending on which way the theological “winds” are blowing, it could be a career-limiting move if you are too vocal and hold views out of sync with those who can affect your employment. This chilling effect can occur even if such a threat is more perceived than actual. Take someone who is as central and organizationally/politically powerful as President Wilson. Add to that his passionate and incessant clarion calls for orthodoxy as he perceives it (see here and here), and you can have a denominational climate of fear. This is one way important but difficult conversations stay under the table. Conservative change aversion is palpable, while liberal drive can overreach. And the laity-at-large are too often substantially underinformed about such problems. They are being taught doctrinal positions in contexts like the Sabbath school lessons. But these orthodox viewpoints—even if 100% correct—do have counter-arguments that can be disconcerting, potentially even faith-destroying, if and when members are exposed to them.

When you consider recent denominational history, addressing theological problems has been rare and flawed. One very public example was the 2012–14 Theology of Ordination Study Committee (TOSC). (One reflection of this committee’s activity is found here.) The composition of TOSC almost surely guaranteed either actual failure or, at best, plurality in its output (which indeed occurred). There were many less-than-theologically-qualified members and also some ideologues—people who were highly positioned, to the extent that their openness to let theological “chips” perhaps “fall where they may” ought to be considered suspect.

Another example is the several recent Faith and Science Conferences sponsored by the General Conference. But anyone acquainted with the full range of geological issues in the age-of-earth controversy who then compares that with the actual presentations ought to easily see that these conferences were exercises in apologetics and not a fair or full examination.

There is one Adventist institution that might be considered a proper venue for some of these difficult but crucial conversations—the Biblical Research Institute (BRI). I recently looked over their website and found a happy surprise. They are sponsoring an upcoming conference (October 13–16, 2022) titled “Being the Remnant: Adventist Identity in History and Theology.” This topic would seem to hold the promise of discussing how Adventism addressed (and addresses?) outside ideas that challenge orthodoxy. Then again, it might leave uncomfortable questions unconsidered. In any case, Spectrum will be covering this event, so stay tuned.

Elsewhere on their website, in a section labeled “In-depth Academic Literature,” is a book advertised for sale titled: Biblical Hermeneutics: An Adventist Approach. I suppose it ought to be viewed as academic, yet this subject should directly address issue #5 above. But maybe not. (I haven’t read it yet. It’s on my winter reading list.) The key question is whether such a book’s “conversations” fairly deal with any challenges to how Adventist hermeneutics are grounded. Or does it just make certain presuppositions that, historically, have been normative within the denomination? There is a lot of Adventist literature targeted to what I might call a “hothouse” audience. That is, an Adventist sub-cultural constituency that makes unquestioning interpretive assumptions when such premises instead ought to have full, critical analyses.

One thing is evident to me in all this. The BRI is considered academic, and, if it were to address controversy, they presently would not be working in foreground view of the church at-large. (Show of hands: how many readers are aware of the book Biblical Hermeneutics?) And I cannot easily think of other potential institutional venues where the pursuit of difficult conversations might be vested.

I wish the bulk of this essay would have explored the actual content of the Difficult Conversations book as it might relate to denominational Adventism. It has some very useful insights on how controversy can be constructively discussed. And I certainly recommend it for readers who might employ those ideas at the interpersonal level, whether in discussion of Adventist issues or not. But where can difficult conversations really occur at the institutional level? Presently, with the possible exception of a near-invisible BRI, current leadership seems not merely unwilling to have these uncomfortable examinations, but there is active rhetoric (at minimum) to suppress them. Sincerity is not the point. I have no quarrel with well-intentioned people. But you just cannot hermetically seal a (roughly) 20 million-member church from fair but difficult questions being raised. More crucially, you ought not to pursue insulation, even if you could succeed. Yet there is hardly more institutional readiness today to address difficult conversations than there was 50 years ago under Pierson’s leadership. And the Adventist demographic—at least in the so-called “economic first world”—is aging rapidly. Present culture, youth and, education are sadly impediments to choosing Adventism. This begins to resemble a slow but very real downward spiral toward denominational irrelevance.

Previous Spectrum articles by Rich Hannon can be found by clicking here.