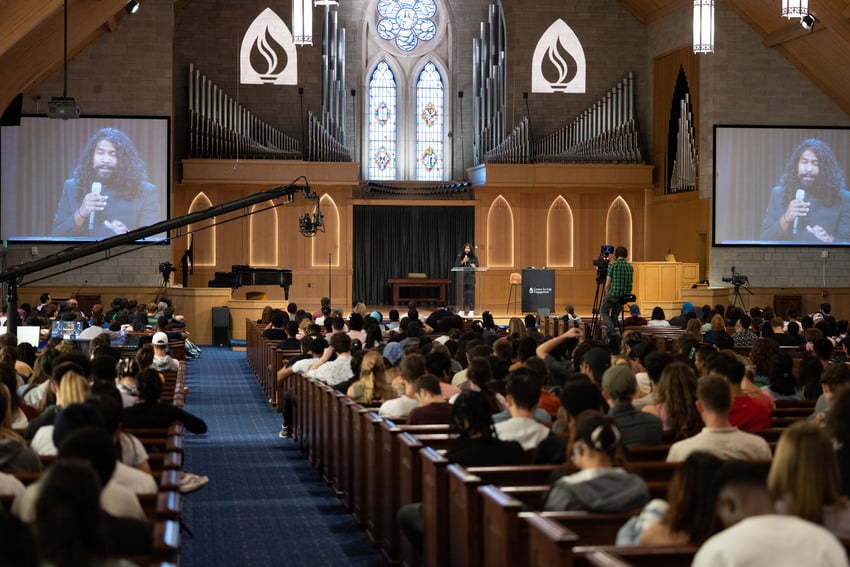 Editor’s note: The following op-ed originally appeared in the Student Movement, the official student newspaper of Andrews University, and is reproduced here with permission as part of an ongoing series featuring voices from Adventist colleges and universities.

Chapel. When most students hear that word, they don’t immediately think of its actual definition, but of something quite different. In fact, what comes to mind is so far from what “chapel” actually means that it poses a legitimate concern as to why that is the case. What is this thought, you may ask? Fines.

Now, why is it that religious programming offered to students at a Seventh-day Adventist university became negatively associated with the annoyance of getting fined? The answer is well-known: if you don’t attend a set amount per semester, you’re charged as part of your school bill.

This is because chapel is a special type of co-curricular program offered at AU. Co-curriculars are out-of-classroom semester learning requirements of which most undergraduates need 30—12 of them being chapels. Most people know that charges will appear on your account if you don’t reach the quota: $25 for the first absence, and $15 for each subsequent absence after that. I believe that many of the programs offered are informative and intriguing, and the idea of co-curriculars themselves are unproblematic. However, the problem lies not with the concept itself, but with the way religious programs—in this case, chapels—are being handled within this concept.

Even though the topic of chapel requirements has already been touched upon several times throughout the years, a quote from an article written last fall over multiple inquiries about its existence sparked my interest: “The higher-ups at Andrews said a chapel requirement was needed to be accredited as an Adventist university.” So, of course, I had to look up this elusive requirement.

According to the handbook of the Adventist Accrediting Association (AAA), the requirements related to chapels are as follows:

“Students are actively involved in a variety of . . . programs . . . (including) curricular requirements for student involvement in service learning. . . . At minimum, the spiritual master plan should incorporate . . . a description of corresponding curricular and co-curricular programs and activities . . . Time dedicated to corporate worship without the imposition of conflicting events.”

There seemed to be no direct standard for a religious co-curricular that is subject to fines—only credits related to service are mentioned as required, and programs such as Proximity and other worship outlets have nonconflicting scheduling with classes. Additionally, the description of what a chapel’s goal is according to the AU handbook is that it “allows students to interact with a wide range of inspiring pastors, community leaders, authors, faculty, students, and alumni.” The wording of both co-curricular standards suggest that they can easily be applied to a secular co-curricular, like Tuesday choices and academic assemblies. Hence, it is unnecessary to make chapels required, much less charge students if they don’t meet their quota.

But this article is far from over, for it is one thing to bring up a common complaint and add it to an already burning fire; however, it is another to not only address the grievance, but also offer solutions as to how it can be remedied. At this time, I propose two.

The first solution is to shift the monetary incentive from negative to positive. As of right now, chapels are associated with an aversion to monetary penalties. However, if the incentive goes from “If you don’t meet requirements, you’re going to get fined” to “If you meet requirements, you get a tuition bonus,” then suddenly, the negative connotation is gone. Even if the bonus is smaller than the fines would have been, it’s still an incentive to go to programs.

It must be addressed, however, that positive incentives are less successful than negative ones. More likely than not attendance will decrease; but, then again, many speakers prefer smaller, engaged audiences to larger, apathetic ones. Still, it’s fairly bewildering to associate monetary loss/gain with any religious program, which brings me to a second possible solution: to remove the chapel requirement itself from the co-curricular quota.

We’ve already established that the end result for chapels can be easily met with various other projects that don’t result in monetary penalties. The solution for this is to simply have all co-curricular programs in the same category as a requirement of 30, period. Don’t make chapels required, but make them easily and frequently available. That way, chapels are still optional for those who wish to attend, but they’re no longer specifically tied to fines. This stance is strengthened even more when taking into account an email that was received by all undergraduates on the 24th of October, which informed students of opportunities to receive chapel credit by participating in programs that are not during a designated chapel time, furthering the question of why there needs to be a specific category at all.

According to the AAA, “Adventist education imparts more than academic knowledge. It fosters a balanced development of the whole person,” including “to promote loving service rather than selfish ambition.” If going to chapel to avoid fines is the primary reason the general student body goes, then would that not be in and of itself pursuit of a selfish ambition?

This is the aftermath of having a religious opportunity be part of a checklist—it removes the substance and strips its intent to a mere requirement. If chapel’s intention is for spiritual growth, then implementing a financial penalty is counterintuitive and could harm further development of a desire to pursue a Christian walk. Without that, the aim of Andrews University itself could be called into question. Thus, it may cripple the search for knowledge, as well the affirmation of our faith–and, ultimately, the desire to change our world.