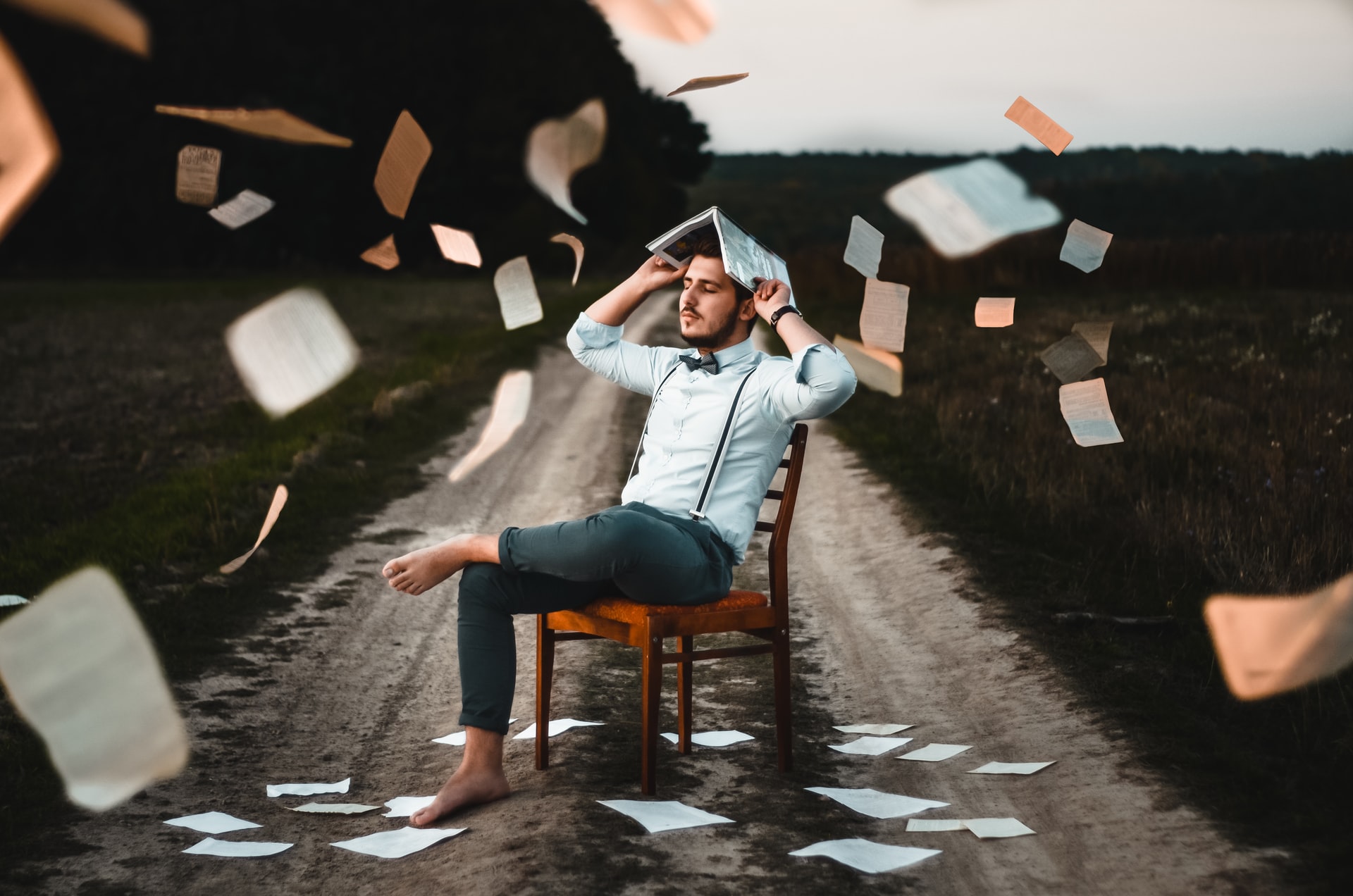 The following graphic is what many people envision when we talk about reaching the “whole person.” It is also how we often conceptualize the term “holistic.” The spiritual dimension is portrayed as one element of a person’s life among others. The problem is that this concept is unbiblical. 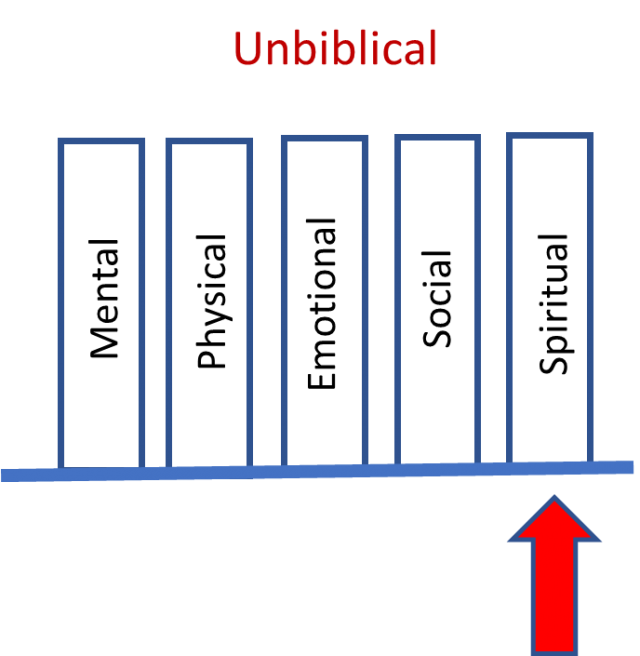 In scripture, the “Spiritual” component is not simply one aspect of a Christian’s being. The Bible teaches something very different, which is represented by the following: 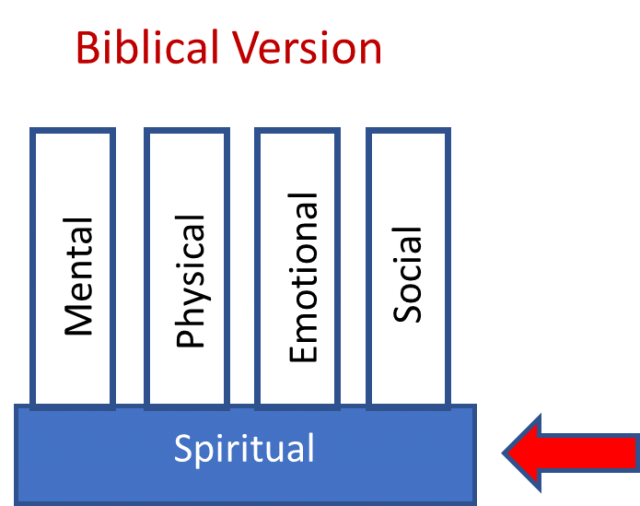 The spiritual dimension is the foundation on which a Christian’s entire life is built. It undergirds and influences all else. Rather than being like one ingredient in a cake, it is more like the leaven that permeates and affects the entire mixture. As the apostle Paul states, “If we live in the Spirit, let us also walk in the Spirit” (Galatians 5:25, NKJV).

So, what difference does it make which model we have in our heads? Which model we employ in how we live our lives? A lot. The difference between those two models actually has profound implications.

The problem of separating out the spiritual dimension as only one aspect of our lives comes from a perspective called the “Sacred/Secular Dichotomy.” It has been around for centuries and is poisonous to Christian living. It teaches that the lives of Christ’s followers are divided into two realms, one sacred and one secular. It teaches that every Christian does some sacred things and some secular things.

Adventists are not immune to the influence of such erroneous ideas.

Tragically, it can result in people thinking that they go to their secular job Monday through Friday and then do something sacred by going to church on Sabbath.

It can result in people thinking that pastors who focus on theological issues full-time are pursuing a higher calling than Christian plumbers, engineers, or homemakers.

It can create individuals who teach adult Sabbath school every week but who are bears to live with at home.

It can cause people to have a hard time accepting that the church building is no more sacred than an office suite downtown. Mike Baer puts the issue in stark terms: “Today, we must stop thinking of a church building as the Church, the House of God, or a place anymore special to God than a school, a mall or a baseball park.”[1]

It can result in some Adventists having a hard time accepting that preaching a sermon is no more sacred than a Christian carpenter doing an exceptional, God-honoring job remodeling a customer’s home. In fact, biblically speaking, the carpenter is doing ministry fulltime (2 Corinthians 10:31, Colossians 3:17).

Most of this wrong thinking comes from a failure to fully recognize the incredible revolution created by Jesus’ life, death, and resurrection.

In Old Testament times, the term “sacred” was often applied to: 1) places — the temple, 2) certain people — the priests, 3) specific activities — offering sacrifices.[2] God used this approach as a teaching aid to get the former Egyptian slaves to understand and internalize the basics of who He is and how to be saved (Ezekiel 36:26-27).

In the New Testament all that changed… dramatically.

For example, the apostle’s teaching would end the role of the Jewish Temple. The entire Temple complex had taken forty-six years to rebuild, occupied an area the size of ten football fields, and was the center of Jewish life in Jesus’ day.[3] It was the glue that unified the widely scattered Jewish population.[4]

Then, along came the apostle Paul and the other apostles who had the audacity, the courage, to teach that because of Jesus’ sacrifice the Temple and all its myriad activities were now meaningless. The huge temple doors needed to be shut forever. Lights out. Or better yet, transform it into a welfare center for destitute foreigners.

What changed? God now resided in the temple of people’s hearts.

The Christian message would also relegate the thousands of Jewish Priests to the unemployment line because all Christians were now priests themselves.

Christianity taught that the entire sacrificial system needed to be dismantled. The raising, selling, and slaughter of tens of thousands of innocent lambs needed to stop immediately. As a result, the incredibly lucrative business of imposing temple taxes and exchange fees that kept the millionaires club within the Sanhedrin flush with cash needed to dry up.

Circumcision, which had been meticulously practiced for centuries, no longer mattered either. It was now a worthless outward ritual. All of Christ’s followers, both Jews and Gentiles, were to be circumcised in their minds (Romans 2:28-29).

At the heart of this need for change was Christianity’s re-definition of the word “Sacred.” That important word no longer pertained to temples, a certain class of people, or sacrifices. It was now co-opted and became the province of anyone who followed Jesus — Jew or Gentile, literate or illiterate, rich or poor, leaders or cast-offs. It said that in the eyes of God, every Christian’s LIFE is now sacred, every little bit of it. Nothing in their life is secular due to Christ’s righteousness and the work of the Holy Spirit.

The great preacher Charles Spurgeon said in a sermon in 1874, “To a man who lives unto God nothing is secular, everything is sacred. He puts on his workday garment and it is a vestment to him. He sits down to his meal and it is a sacrament. He goes forth to his labor, and therein exercises the office of the priesthood.”[5]

The bottom line in the New Testament is that the only dividing line between sacred and secular is between those who follow Christ and those who do not. There is no dividing line for Christians. No segmentation, no compartmentalization of spiritual things.

These concepts have very important implications for Adventists everywhere, but especially for our universities that have four short, precious years to guide thousands of young adults into a right understanding. Students often come to our schools with a “worldview salad” in their heads that includes such false teachings as postmodernism, individualism, consumerism, naturalism, etc. Sadly, far too many have also adopted the distorting influence of the “Sacred/Secular Dichotomy.”

It is the privilege of the university to recognize the baleful effects of this perspective and do everything possible to correct and counteract it.

This “Sacred/Secular Dichotomy” can be so ingrained in students’ thinking that it will require significant measures to root it out. I have a few suggestions that might help:

1. Explore the issues surrounding the Sacred/Secular Dichotomy with all employees and students and discuss them fully.

2. Stop doing anything that creates the impression that certain aspects of campus life are more spiritual than any other. Students need to see Christianity as part of everything being done at the university.

3. Find creative ways to overcome the view that Adventist education simply mimics a secular curriculum with some spiritual stuff added on, such as religion classes, chapels, chaplains, and worship on Saturday.

4. Wherever possible, team teach religion classes with a Bible teacher and teachers from other disciplines so students see the same theological integration in class as we hope they will in life.

5. Integrate Christian principles into every course in a way that doesn’t seem artificial or “tacked on.”

6. Tell students how each Bible course directly relates to their careers. I will never forget the survey one college conducted asking students how they felt about their religion courses. A significant number said they appreciated the content but couldn’t see why they had to pay for courses that didn’t relate to their major.

7. Repeatedly and consistently attach the phrase “God’s calling” to all professions and careers, not just theology majors, with a special dedication service.[6]

8. The Chaplain is often looked to as the primary spiritual advisor on campus. In recognition of the “priesthood of all believers” (1 Peter 2:9), I would encourage the Chaplain to select a number of teachers, staff members, and students to be mentored as “Spiritual Ambassadors” on campus as is being done by AdventHealth in Orlando, Florida and Merriam, Kansas.[7] The position of “Spiritual Ambassador” would then be a recognized part of campus life. Both employees and students need to see people like themselves, without formal theological training, as resources for their Christian journey and needs.

9. Because labels matter, find a creative way to expand student’s concept of the word “church.” When the apostle Paul sent a letter to believers, he didn’t address it to a building but to the people who met in a certain town. The New Testament church is the people and relationships. The Greek word for “church” simply means “called out ones.” So, when employees and students come to the campus Monday through Friday they are going to church. The Chemistry 101 class is being church when they meet to study the Periodic Table. The accountants and bookkeepers in the Finance Office are being church when they process student payroll. This understanding can make a significant difference in how people perceive their various tasks.

10. Personally, I would stop using the word “spiritual” as much as possible. It is simply too fraught with wrong thinking and connotations to be redefined. It calls forth mental images and meanings that reinforce the “Sacred/Secular Dichotomy.” It is far better to use the term “Biblical Worldview” as seen in the graph below. 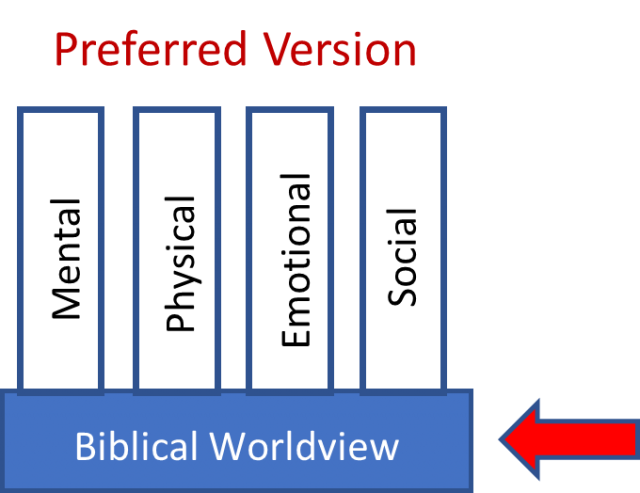 I will be exploring the importance and the various dimensions of a Biblical Worldview in Part 3 of “Thoughts on Adventist Higher Education.”

For Part 1 of “Thoughts on Adventist Higher Education” click here.

Email questions and suggestions to: kajohnsonresearch@gmail.com.

[5] Hugh Welchel, “When Will the Church Overcome the Sacred-Secular Divide?” Institute for Faith, Work, and Economics, December 8, 2016 https://tifwe.org/overcoming-the-sacred-secular-divide/

Photo by Dmitry Ratushny on Unsplash