A Risk Worth Taking: The Story of My First Sermon 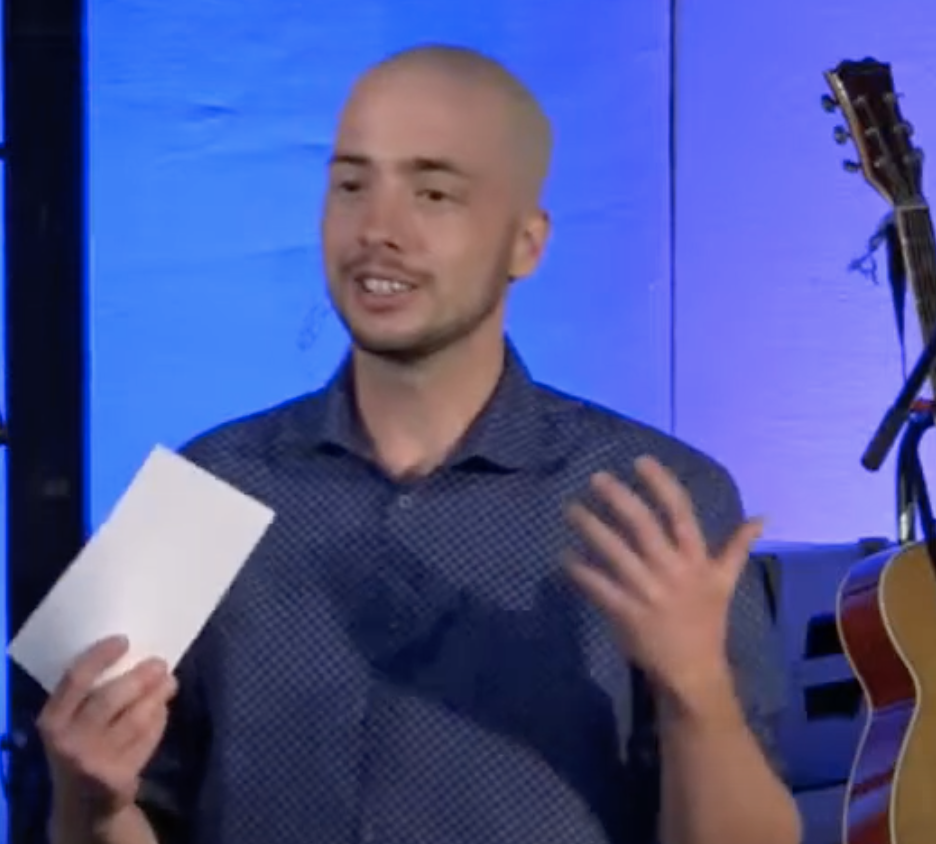 Have you ever been so petrified as to be unable to move? I was when I wanted to ask my local pastor if I could preach a sermon. Not too long out of high school I had started attending a Baptist church after being invited by a friend-of-a-friend. It was there I heard the sermon about giving up our “rocks,” the various things we hold on to that prevent us from receiving God’s blessings with open hands. To help further the point, each person in attendance was given an actual rock to hold. When the pastor asked God to show us what thing we had been holding onto, the realization of how much anger I held came to mind. It was from a first girlfriend break-up sort of thing. After the sermon during the closing songs, church members were given the opportunity to give up their physical rocks by placing them on stage. Later these symbols were dumped into the nearby lake. I was not able to place my rock on the stage during that moment, but after three days of prayer and reflection, I did smash it to bits.

This was the experience I wanted to bring back to my Adventist church, the freeing of clenched fists, of pasts dragged into presents realties. I hadn’t really been involved much in church up to this point—played a few times up front, read a couple of scripture readings, I think I might even have prayed once. It was equally as shocking to my mother when I decided to ask if I could preach this “giving up rocks” message. After church I asked my pastor if we could have a meeting…because that’s all I could stammer out. It was set. I sat in his office and we talked for about an hour. Then he mentioned that he had a couple’s counselling he had to go to. As I stood up and reached for my jacket, I thought to myself: Dude! You gotta do it!

I turned around and squeaked out,

“…I had one more question.”

“What is that?” he replied.

“Um well…I was wondering if I could preach a sermon one Sabbath?”

This was the moment of moments. The pastor looked down at his calendar and just asked,

What!? When!? That was not what he was supposed to say! I mean there’s a hundred more questions he should have asked me, like what on earth would I even be saying?! I actually did not respond as I was in complete shock.

Three weeks from this Saturday work for you?” He asked.

“Um, yea, that…that can work,” I managed to once again stammer.

With that I left feeling like I was walking on fluffy clouds. Soon that passed as I realized I was going to be preaching in front of the whole church.

A week later I met with the pastor to share the sermon rock idea, where I had gotten it, and why it was meaningful. But then I had another question to ask. This church was traditional, meaning their source of music was mainly hymns. I asked if I could lead out the worship service with my bass guitar, a few electric guitars, keyboard but no drum set, rather we had congas. The pastor had a thoughtful look, he told me of the past problems our local church had with music but that it was time to address them in a new and respectful way. There I had it, preaching and leading in the music.

The next week I got another idea. What if we rearranged the worship service and placed the music right before I preached to have a more unified experience? Usually, music was sung at the start of church service, followed by announcements, children's story, scripture reading, special music and then the sermon, with some prayers in between things. It left the brain wanting death rather than any more talking even before the preacher got up. This idea took me to a church board meeting. I presented my idea that music is indeed part of worship, opposed to announcements which are just community service, also, they’re printed in the bulletin. And there I had it, preaching, music and a new order of service. What more could a 20-year-old ask for of a church that had not changed its service in over eight years?

The day came, and I held my breath. There was a look of confusion on some faces as announcements started us off, and children’s story being a bit too early. But then we played our six songs – usually there were only three – I spoke for 20 minutes and we then sang another three songs so people could place their rocks on the stage steps.

The responses I got from church members after the service brought out the furthest hopes I could have ever had. One lady shared that she was worried when she walked in and saw the electric guitars, but she exclaimed, "the music was so lovely! It just flowed right into the sermon.” Soon afterwards, this church, rooted in one style of worship, had a praise band start up. Another lady, a dear friend of mine, stated that she could usually fall asleep and wake up knowing exactly where things were, but with this new service she had to actually pay attention. Parents brought their kids over to me so the children could share how much the sermon meant to them weeks later. Even six months after I had a person tell much how much they enjoyed that service. She admitted to not remembering exactly what I had said, but that the music was amazing.

I went on to not just preach a sermon series. I spoke at school sport tournaments, even did a lecture at camp meeting. The idea of speaking, of preaching up front opened up in amazing ways. Later on, while studying at Columbia Bible College I was able to bring back to my city what I had learned in even more sermons. This journey mixed into my love of teaching; I am now a provincially certified Bible/religious teacher, among other subjects. More so, a couple of summers ago I did a wedding because my friend’s mother remembered me speaking at her church.

But what is so much more important is the felt place I now had in my church. I went from a partaker of church events to an invested member of a community. I later asked my pastor (just about to retire at this point) what his side of the story was. He had not noticed my nerves, thankfully, that day I initially asked. I wondered why he let me do this crazy idea that seemed to have no end,

“Because” he replied, “it was a risk worth taking.”

That’s the line we need to hear more of, to allow for the risks of imperfection, to allow for less-than-ideal moments. For this produces a sense of value far beyond anything that can be stated in words. Somehow my pastor recognized the Spirit’s calling and set aside the potential of everything falling apart one Sabbath to allow me this crazy opportunity. Was there blow back? Yes, a bit, for one of the calls to prayer there was usually seven bell chimes, and we had taken it out which made some members unhappy. The bells were reinstated, but just at three chimes.

I was allowed to act out something meaningful to me, I was given a gift that showed I was more important to my church than service order, or any form of embarrassment I might have encountered on stage. It fostered in me a sense of self-worth that has allowed to me to active in church, from challenging the status quo, to sharing my story, such as a recent sermon on forgiving my ex-wife.

When? When can we allow the risk of value making outweigh our desire for church service “perfection”? When will we pull the camera back from our increased desire of broadcast-ability? But more to the heart of the matter, when will peoples’ sense of community be more important than our expectations of the weekly service? The battle of hymns vs. praise/ contemporary music is a glaring example of misplaced value. We form church for people, not as theatre of entertainment.

I will admit, I do not like the line “God doesn't call the qualified he qualifies the called,” not because I don’t believe it to be true; but because it has become a buzz-phrase. It has lost its core meaning of a community willing enough to embrace the unperfected, the rough and unpolished moments. To avoid something awkward we take less and less risks, which is felt and interiorized as “I’m not good enough.” Not only that, it generates the “frozen chosen” as my mother says it, the group of people that only raise their voices to complain that something isn’t meeting their preference.

I’ve had not good enough moments too, for having graduated from a non-Adventist university, though all of them have been Christian, I am often second-guessed. Leading to some ironic moments when pastors have noted they wished more preachers had training similar to mine, yet no Adventist university offers my degrees. This taps into a motivation factor that is so often overlooked. If there is no culture of taking risks on people, then there is no draw for people to step up or to follow the call placed on their heart. Either they fall deadened to the Spirit’s call because it is not supported by the church or they leave for another faith community; this story did start at a Baptist church after all.

I keep returning to Andy Stanley’s statement: “You are more important to me than my view.” How would that transform our faith communities? Or to bring in Jesus’ statement in a different way, what if “the Church was made for man, not man for church”? I know the counter-argument would be wanting to listen to pastors that have the correct training and therefore the correct theology (a shaky logic at times). But go deeper, see that the very act of creating spaces for others, even if they don’t fully know what they are doing, is the very act of love we are called to display. My life was transformed by a risk. I hope we can continue on creating spaces in our communities. Remember: people are more important than our discomfort, our expectations, or our bell chimes.

Kevin R. McCarty is an Adventist teacher in beautiful British Columbia and an advanced graduate student in Indigenous & Interreligious Studies at the Vancouver School of Theology.