Is Prayer Walking the Panacea for Adventist Evangelism? 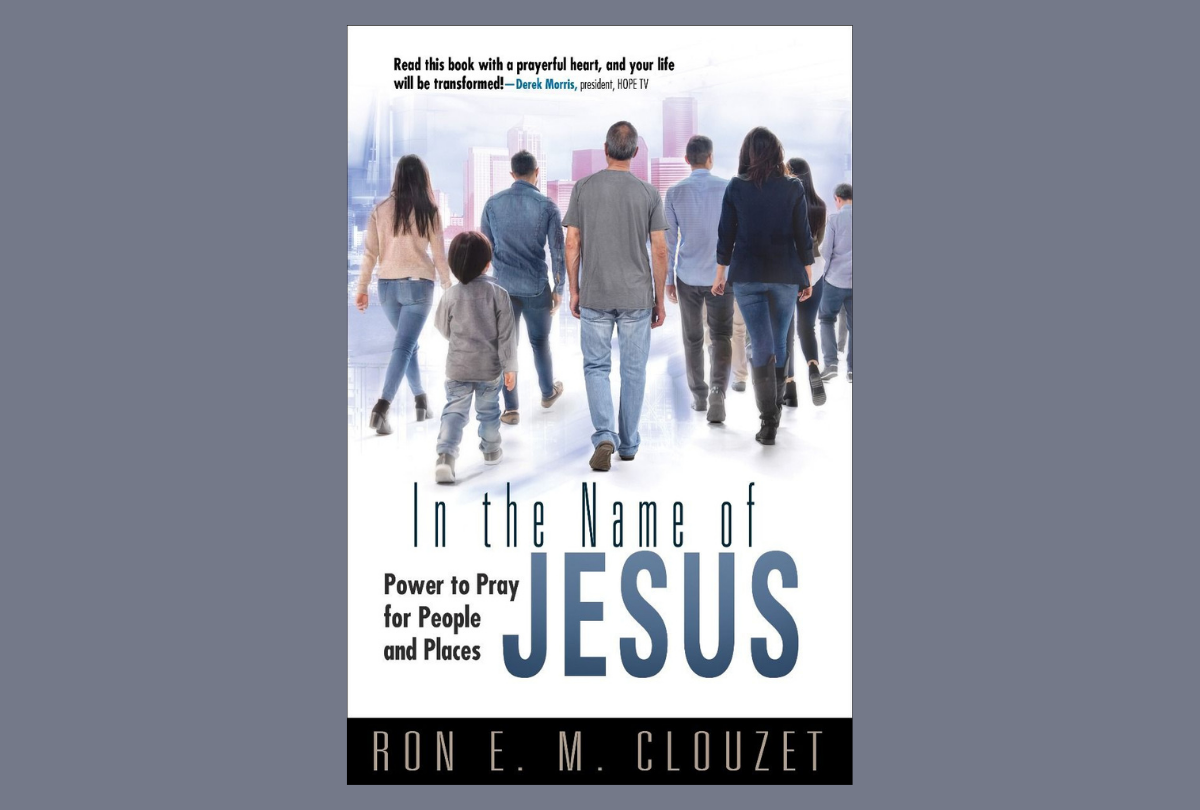 Until six weeks ago when I was approached to review Ron Clouzet’s latest book, In the Name of Jesus: Power to Pray for People and Places, I knew nothing of it. I am solely responsible for not knowing about this book, now being projected as the latest solution to the increasing headwinds facing Adventist global evangelism. But because misery likes company, l feel an irrational compulsion to share the blame for my unawareness, with others. And the decision makers at the Michigan Conference, who closed the Berrien Springs, Michigan, Christian Book Center (ABC), seems like an unfair but irresistible choice.

I bemoan the bookstore’s demise, which no doubt was accelerated by the necessary business closures that typified the pandemic’s first year. But why permanently close the only ABC near the church’s foremost university, which is also home to its premier seminary? The bookstore was a convenient one-stop shop for the latest in Adventist literature and memorabilia for those of us who still delight in the sight and smell of new books. Losing it has made gaining exposure to new SDA literature in this corner of the Adventist world more difficult.

While I could make plausible excuses for my ignorance of Clouzet’s one-year-old book, I have no explanation for my lack of familiarity with the book’s subject: prayer walking. I have a passing awareness of a related concept: prayer warriors, a term whose militant imagery always makes me cringe. Prayer walking, a phenomenon Clouzet traces to the 1990s, is new to me and I was in for a crash course.

Though it sounds mysterious, there is nothing enigmatic about prayer walking. It is just as you might imagine: you walk, and you pray. Clouzet adds a little in his explanation: “praying either alone or with others, focusing on the people and places where you walk.” But he is quick to distinguish this prayer model from merely praying in one’s home. The advantage of prayer walking over other forms of praying is that “you pray for people you see or for people you understand, live or work by the places you see.” It is a more energy exacting form, as prayer goes. And more importantly, it takes the attention from us and focuses it on others. Any prayer that is other-people-directed helps to cure us of our selfish tendencies. So far, a good thing.

But Clouzet does not advocate prayer walking just to spruce up our prayer lives. He weaponizes it for a higher purpose: as evangelism, “to get the gospel to all the world.” Clouzet is concerned about the church’s current evangelistic posture and future trajectory, noting with undisguised alarm that “if we continue as we have, … we will never finish the work of evangelizing the world.” And consequently, though he did not state it directly, delay the Lord’s coming even further. He observes wryly: “Another six thousand years from now, we may still be here.”

Prayer walking then is couched as a strategy to overcome the daunting numerical odds Adventism faces in the race to get our message to every corner of the world. Because, of course, the world’s population is growing faster than we can reach them if we just continue using current conventional witnessing methods. This explains why the big cities of the world: Tokyo, Delhi, New York, London, etc., are Clouzet’s chief focus. These cities contain the world’s most concentrated populations. It also helps that these cities are, using his favorite derogatory descriptive, “Satan’s strongholds.” However, through prayer walking, we could manageably “witness” to them. And if they do not respond positively to the Holy Spirit’s work through our prayers, then they bear the responsibility for their own ultimate destruction.

At its core, Clouzet’s two-part book is a how-to manual on big city evangelism, one that jettisons traditional Adventist information-based proselytizing in favor of prayer and using one’s feet. Part II, with its meticulous instructions and model prayers, demonstrates how individuals, but preferably groups, should divide a target city in sections and blanket it with prayers during planned walks. While group members should devote at least two days weekly for prayer walking, all members should join the group for mass prayer walking on Sabbaths. Why? Because “God gives extra blessings on the Sabbath.”

Tucked in at the end of the book is Appendix B, a list of 548 mega cities with at least one million inhabitants each. Alongside each city is a suggested number of ideal prayer team members needed for effective ministries. For example, New York/Newark, with a population of almost 19 million, needs 1,890 prayer walking teams to be successful. Tokyo, the world’s most populous city of 37 million, needs, by this estimate, 3,750 prayer walking teams. But Tokyo, unless the numbers have gotten dramatically better, boasts less than one thousand baptized, mostly elderly, Seventh-day Adventists.

As distressing as the assumptions undergirding Part II are, it is the book’s first section, the theoretical underpinning that feeds the second part instructions, that I find most troubling. He advances the misguided wholesale characterization of cities and their populations as cesspools of corruption “and sin of every imaginable sort,” as though merely living in rural areas promotes sanctification. And the dichotomy he attempts to create between cities and rural communities, relative to prevalence or absence of sin, is more descriptive of the 19th century than the internet-connected world we live in today. We need not go out of our front doors to find sin. Physical distance from what used to be the nearest sin-opportunity is now bridged.

Clouzet builds the prayer walking strategy on the back of biblical literalism and outlier events. He holds up the episode in Joshua (6:3-5, 12-20), where the walls of Jericho fell after the Israelites walked around it for seven days, as the ultimate prayer walking example. He contends God is waiting to replicate this example if we have enough faith to claim such biblical prayer promises. He concedes that “walking around an area in the city or the neighborhood while praying for the people you see and those behind closed doors may seem like a silly strategy,” but so too thought “the Canaanites inside the wall.”

Seeming to anticipate pushback from perceived naysayers, Clouzet redirects us to the real culprit, our disobedience: “The power is not in the particular strategy used, but in whether or not we will obey whatever He tells us to do.” In essence, if our prayer claims do not bring about the desired outcome, it means our faith is lacking. Yet the biblical account of the sojourning Israelites documents many other military encounters with unfriendly communities on their way to the Promised Land, and numerous others after they became an established nation. The record does not show that they returned to the Jericho strategy that we’re now being told is pivotal to finishing God’s work.

One-offs like Jericho or the story of Jonny Barnes, which he touts as validation of his strategy, and many others scattered throughout the pages of In the Name of Jesus, are exceptions that do not make the rule. Yet, Clouzet uses them as sure things and dares us to contradict him. Judging from the three pages containing nearly 20 endorsements from the Who’s-Who in Adventist evangelism, he might have succeeded. For not one of these endorsers asked if he has proof of anyone in these cities or neighborhoods becoming Seventh-day Adventists by his prayer walking strategy, since that is the intended goal.

This type of book speaks to our church’s frustration and generational inability to “deal” with the long “delay.” Many SDAs accept or assume the mantle of evangelizing the whole world with Adventist Christianity as a condition for the Lord’s return. This position, which over time has become something of an albatross around our necks, developed gradually as our forebears’ attempted adjustments to the post-Great Disappointment delay. But time and arithmetic have not been kind to us. So we periodically react to the daunting task ahead by proposing mathematical solutions such as “A Thousand Days of Reaping,” or strategic initiatives like “Evangelizing the 10/40 Corridor” to show our resolve. So, what could charitably be described as gimmicks, such as prayer walking and prayer warriors, can also make us feel we’re actually doing something. But instead, they result from our narrow Adventist-centered and numbers-driven definition of evangelism.

At this rate, the next incarnation of prayer walking will probably advance the imagery to prayer driving or prayer flying, as such metaphors conjure images of a sped-up process. Since biblical literalism is the cornerstone of the book’s argument, we should be reminded that Luke provides the perspective that Jesus could raise up stones to do his work if he so desires: “If these should hold their peace, the stones would immediately cry out.” (19:40)

The habit of taking disparate biblical statements and joining them to propel a narrative is not new. Yet some, who because of their training should know better, have used this practice to make the Bible say whatever they want. Unfortunately, In the Name of Jesus is a walking example of this phenomenon. It strings together quote after quote in a dizzying litany that assaults moderation and reason itself. The Bible recounts events in early Christianity where some of Jesus’ followers did marvelous deeds by invoking Jesus’ name. There has been no widespread evidence since then that his followers can rely on such invocations to fulfill the Gospel Commission. If I were a betting man, I would wager that in ten years it is unlikely we will be talking about prayer walking as a viable solution to speeding the Parousia.

What we probably need to do, as Adventist Christians, is make an honest reassessment of the restrictive ways we have defined the Gospel Commission. Then we won’t have to resort to schemes that look at evangelism as supernatural warfare only, but as actual human interactions that demonstrate Christian love and fellowship. One senses throughout the book that Clouzet sees city dwellers as sinful just by association. His conclusion that “cities were never the invention of God” seems to prejudice his overall assessment of the humans who live there, not as individuals but a glob of unsavory characters who have chosen to inhabit places which God disapproves of. Like Cain, its murderous first city founder, all who live in cities come across in In the Name of Jesus as an especially depraved breed and therefore a witnessing “charity case” to be prayed for rather than fellowshipped with.

The narrative in Acts (11:25-26), describing the context in which Christ’s early followers came to be called Christians, is instructive: “Then Barnabas went to Tarsus to look for Saul, and when he found him, he brought him to Antioch. So for a whole year Barnabas and Saul met with the church and taught great numbers of people. The disciples were called Christians first at Antioch.” So, for one whole year, they lived among and interacted with the people, teaching them what they had learned about Christ. Their lives and teachings were Christ-like, so the early converts made the connection and called them Christians. A sanitized evangelism that downplays human contact and learning is unlikely to produce the vibrant Christian communities envisioned as the enduring consequence of evangelism.