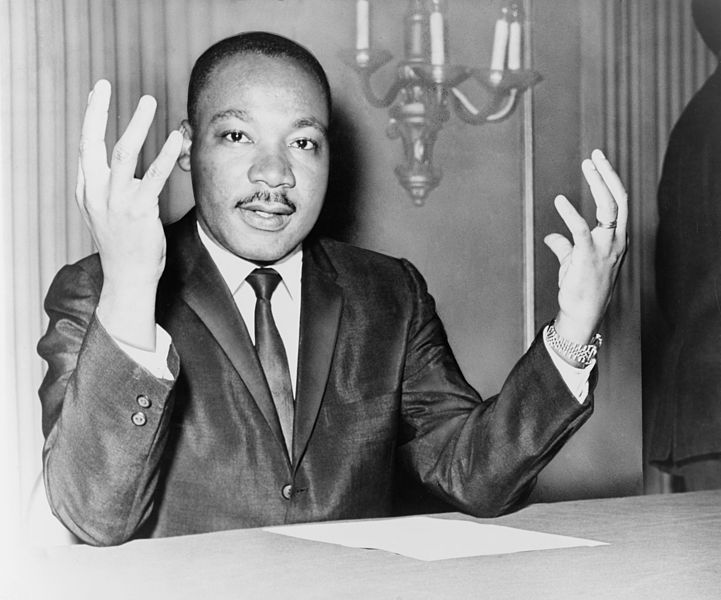 In his book, Why We Can’t Wait, Dr. Martin Luther King, Jr. may have spoken more prophetically than even he realized when he said:

Our nation was born in genocide [emphasis added] when it embraced the doctrine that the original American, the Indian, was an inferior race… From the sixteenth century forward, blood flowed in battles over racial supremacy. We are perhaps the only nation which tried as a matter of national policy [emphasis added] to wipe out its indigenous population. Moreover, we elevated that tragic experience into a noble crusade… Our literature, our films, our drama, our folklore all exalt it.

…It is this tangled web of prejudice from which many Americans now seek to liberate themselves, without realizing how deeply it has been woven into their consciousness.

Okay, so let’s untangle some of the web we just read. Was there even enough of a Native population to talk about genocide? Was genocide committed in America? What’s so prophetic about the statement and why is it relevant today?

What a tangled web we weave…[i]

There is a long contentious debate over the numbers of Indigenous people in the pre-Columbian Americas. Some people in the early 1900s said that there were less than 1 million Native Americans before Europeans arrived in what would become the U.S. Modern estimates range from 7 to 15 million or more.[ii] On the other hand, a quick internet search of how many bison roamed the continental U.S. results in consistent estimates of about 30 million.

Isn’t it amazing how unified the estimates are about the number of bison in America versus the polarized reports of how many humans lived here? Could it be that lower Native population estimates help preserve the myth of American exceptionalism, while higher estimates haunt America’s guilty conscience? A small population supports the narrative of God providing virgin territory for virtuous, Euro-Americans to peacefully practice their Protestant work ethic. If the land was occupied by millions of people with their own civilizations, that means white evangelicals manifested their destiny through violent dispossession.

While scholars comb through the minutiae to support higher or lower estimates, are there any basics that can help ordinary people straighten things out in our minds?

Consider that over half of the states in the U.S. have names derived from languages spoken by the people they displaced.[iii] Pick out any of the 50 states and you’ll find that each of them has hundreds of Native American names for cities, counties, rivers, and roads. For instance, Maryland has at least 315 places with Native names.[iv]

Not only is the geography densely populated with Native American references, but add the number of sports teams, scout groups, campground cabins, military weapons, etc. with Native names and you’ll find yourself surrounded by the linguistic presence of Indigenous peoples from sea to shining sea.

There’s also living evidence, because God has a way of preserving his witnesses in the world — even if they’re a small remnant of who they once were. The diversity of the survivors should detangle any remaining doubts about Indigenous people meeting or surpassing the high end of pre-Columbian population estimates.

Although routinely undercounted by the Census, we have at least 5.2 million Native brothers and sisters with us today.[vi] Although small in number, they account for 150 of the 350 languages currently spoken in the U.S.[vii] The number of surviving nations and languages after so many centuries of war, famine, disease, and forced assimilation speaks volumes about the multitudes living here before their land was “discovered.”

The term genocide was coined in 1943, but not adopted by the U.N. until 1948 in the aftermath of the Jewish Holocaust in Nazi Germany.[viii] According to Article II of the U.N. Convention on the Prevention and Punishment of the Crime of Genocide:

Genocide means any of the following acts committed with intent to destroy, in whole or in part, a national, ethnical, racial or religious group, as such:

(a) Killing members of the group;

(b) Causing serious bodily or mental harm to members of the group;

(c) Deliberately inflicting on the group conditions of life calculated to bring about its physical destruction in whole or in part;

(d) Imposing measures intended to prevent births within the group;

(e) Forcibly transferring children of the group to another group.[ix]

Did you notice Dr. King referred to entertainment’s role in exalting genocide against the First People? There have been too many books, movies, and sporting events pitting cowboys against Indians to pretend as if the acts listed by the U.N. weren’t committed against America’s Indigenous people. A lesser-known storyline is that Hitler modeled his concentration camps and extermination practices, in part, after the U.S. policies toward Native Americans.[x]

Anyone who paid much attention during American History has heard of the Indian Removal Act and the subsequent Trail of Tears under Andrew Jackson’s presidency. Doesn’t marching people from Georgia to Oklahoma during winter bring about physical destruction and cause mental harm to members of the group? Don’t worry, this isn’t an Andrew Jackson bashing party. These were national policies executed by leaders in every branch of government and from every political persuasion.

The noble emancipator, Abraham Lincoln, also commissioned several Indian removal operations. One of them is known as The Long Walk. Around 10,000 Diné (Navajo) were marched to a reservation called Bosque Redondo, with several hundred dying along the way. Shortly after arriving there, over 2,300 more people died. Perhaps the death rate had something to do with the land being “unfit for cultivation of grain because of the presence of alkali”? Or maybe because the Diné were being fed “meal, flour, and bacon which had been condemned as unfit for soldiers to eat”?[xi] At any rate, Lincoln’s Homestead Act and Pacific Railway Acts were smashing successes once he got the Indians out of the way![xii]

Ever heard of the Indian boarding schools which began in the mid-1800s? They operated under Brigadier General Richard Henry Pratt’s philosophy of “kill the Indian…and save the man.” This system heartlessly separated children from their parents in an effort to strip them of their language and culture.[xiii] Then came the “termination” policies of the 20th century.[xiv] And in the 21st century we still witness environmental racism plaguing Natives as detailed in As Long as Grass Grows and as seen at the pipeline conflict at Standing Rock.[xv] Unfortunately, Dr. King wasn’t being hyperbolic in his use of “genocide” to describe how America has historically leveraged national policy against its Native population.

Okay! So, what’s the prophetic part and does it liberate America from this web? See "MLK’s Overlooked Oracles — Part 2."

[i] …When first we practice to deceive. —Sir Walter Scott

[ii] A few websites to compare are https://www.se.edu/native-american/wp-content/uploads/sites/49/2019/09/A-NAS-2017-Proceedings-Smith.pdf; https://www.history.com/topics/native-american-history/native-american-cultures; http://endgenocide.org/learn/past-genocides/native-americans/; and https://oxfordre.com/americanhistory/view/10.1093/acrefore/9780199329175.001.0001/acrefore-9780199329175-e-3; For a deeper dive, consider James Loewen, Lies My Teacher Told Me: Everything Your American History Textbook Got Wrong; David E. Stannard, American Holocaust: Columbus and the Conquest of the New World; Benjamin Madley, An American Genocide: The United States and the California Indian Catastrophe, 1846-1873; and Charles C. Mann 1491: New Revelations of the Americas Before Columbus

[vi] In the 2010 count, nearly 1 in 7 Native Americans living on a reservation was missed, according to an audit by the U.S. Census Bureau. That adds up to 82,000 people overlooked and uncounted — equal to skipping the entire city of Santa Fe, New Mexico: https://www.latimes.com/projects/la-na-census-native-americans-navajo-nation/

[xv] See Dina Gilio-Whitaker, As Long as Grass Grows: The Indigenous Fight for Environmental Justice, From Colonization to Standing Rock