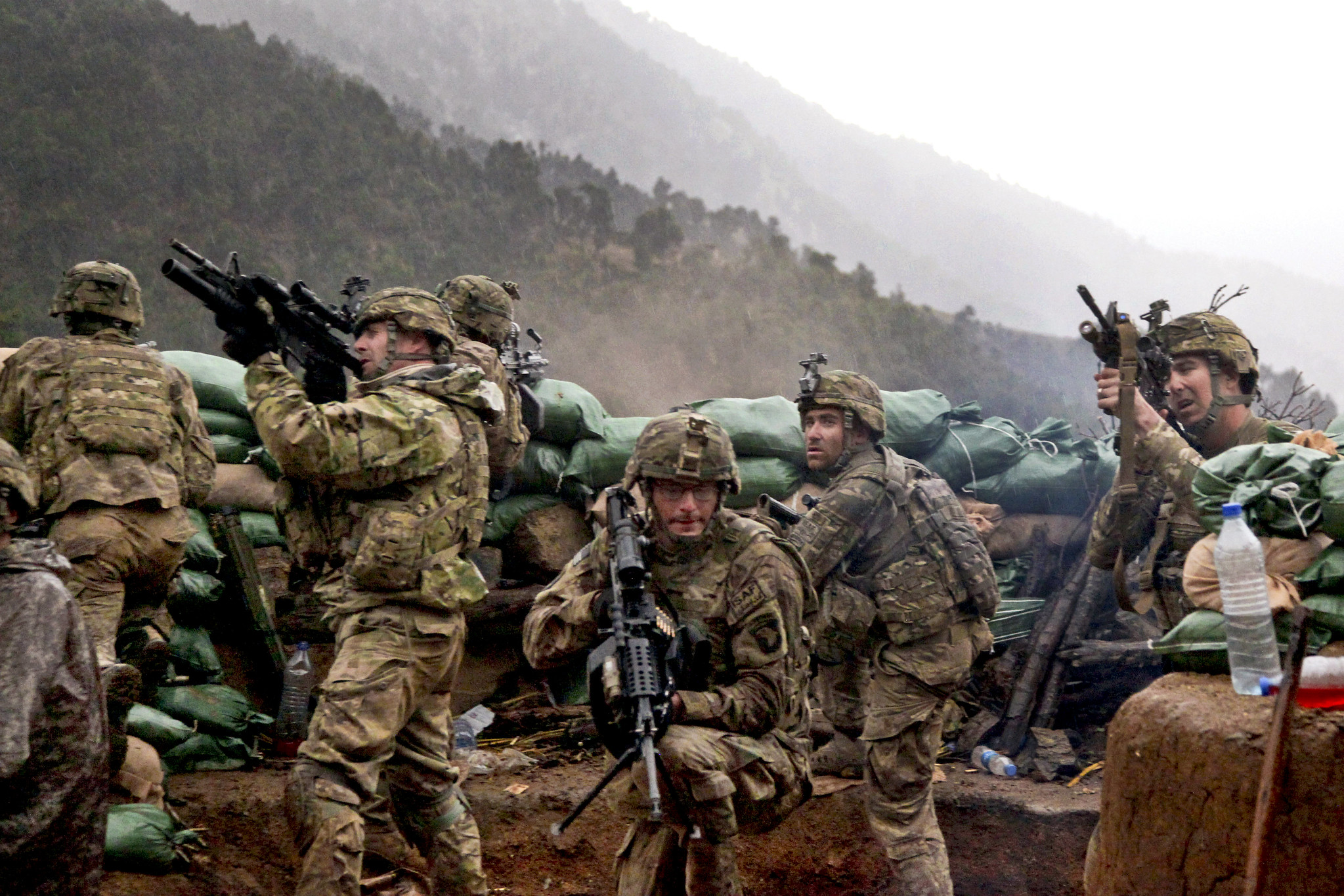 The United States has left Afghanistan after twenty years. The last aircraft took off from Hamid Karzai International Airport on August 30. This was announced at a Pentagon press conference by General Kenneth 'Frank' McKenzie, current commander of the US Central Command. Afghan President Ashraf Ghani had left the country in mid-August. His government collapsed when Taliban fighters entered Kabul. Bringing back memories of the 1975 fall of Saigon, two decades of American military presence in Afghanistan vanished in a matter of weeks. This is a withdrawal “by choice” that poses some problems, not only on a political-military level. The USA did not withdraw troops because the mission had been accomplished, or their presence has become untenable, or they are no longer welcome by the host government. The withdrawal was a choice shared by presidents Trump and Biden, and as is often the case with wars by choice, the outcome of this withdrawal by choice doesn’t bode well either.

US troops first went to Afghanistan 20 years ago to fight alongside tribesmen trying to oust the Taliban government that harbored al-Qaeda, the terrorist group responsible for the September 11, 2001, attacks that killed nearly 3,000 people in the United States. The Taliban government soon fell and many of its leaders fled to Pakistan, where they regrouped over time and resumed their fight against the new Afghan government. US troop numbers increased over the years—at one point during Barack Obama's presidency to more than 110,000—as American goals in Afghanistan expanded. The cost has been enormous: some $2 trillion and nearly 2,500 American lives, more than 1,100 lives of coalition partners, more than 70,000 Afghan military casualties and nearly 50,000 civilian deaths. The results, however, were modest: while an elected Afghan government (unique in the country's history) controlled major cities, its grip on power remained tenuous, and the Taliban regained control over many smaller towns and villages. The US intervention in Afghanistan was a classic case of "overreach," a limited war of necessity that began in 2001 and has turned over the years into a costly war of choice.

But by the time Biden assumed the presidency, the overreach was a thing of the past. US troop levels were down to about 3,000. Their role was largely limited to training, advising, and supporting Afghan forces. There had not been an American casualty in combat in Afghanistan since February 2020. The modest US presence was an anchor for the approximately 8,500 soldiers from allied countries, and also a military and psychological support for the Afghan government. Biden worked from a script he inherited from Donald Trump's administration, which in February 2020 had signed an agreement with the Taliban (cutting the Afghan government out of the process) that set a May 2021 deadline for the withdrawal of US combat troops. The agreement did not obligate the Taliban to disarm or commit to a ceasefire, only to not host terrorist groups on Afghan soil. It was not a peace agreement but a pact that provided a fig leaf—and a thin one at that—for the American withdrawal. Biden only moved this withdrawal back by three months. He was recently asked if he had any regrets about his decision to withdraw all US troops from Afghanistan, and although saddened by the turn of events, he still answered no.

Beyond the unspoken political, strategic, and economic interests that are present in every military intervention, we should be thankful not only to the US army but also to the American people for the enormous costs they have been paying in their effort to neutralize an extremist movement. Taliban effects can easily spread around the world and still constitute a global threat and risk we all need to limit and circumscribe.

A Taliban fighter walks past a beauty salon with images of women defaced using spray paint in Shar-e-Naw in Kabul on August 18, 2021. (Photo by WAKIL KOHSAR/AFP via Getty Images)

But as with every political-military phenomenon, the withdrawal also hides a cultural phenomenon that is not easily perceived and even less adequately resolved. This has to do with the shrinking and stigmatization of cultural diversity. The undoubted dynamism of the modern world and its irrefutable effectiveness unfortunately goes hand-in-hand with a cultural homogenization that today expresses itself in globalization. Wherever cultural diversity remains, the pace of life necessarily slows down. And if time runs (H. Rosa speaks of "accelerated societies," referring to ours),1 this is the most evident sign of the establishment of cultural reductivism. This does not mean that cultural difference disappears altogether; that would be impossible. Rather, on the one hand, it resists reductivism as an exotic outline and residue that gives color and beauty to the excessively mechanical and arid globalized world and, on the other hand, it becomes identity extremism that tries to provide certain values and absolute reference points. This identity extremism takes various forms, ranging from compact religious conviction to purist and racist political radicalism. But it also expresses itself in cultural identity-hardening of which the Taliban’s world is an expression, but certainly not the only one.

This closure of identity, however, does not change the general thrust of efficiency, consumerism, and technology in the contemporary world. According to Professor Giacomo Marramao of the University of Rome, globalization and the hardening of local identities are two sides of the same phenomenon.2 The withdrawal of American troops is a legitimate, realistic, and perhaps even shrewd military and political move, but one that completely disregards the cultural component of the situation. And the European countries that have been very critical of Biden's decision share the same misconception, even if they appear to be more sober and humane. Culturally speaking, the crucial point was not whether the US stays or leaves Afghanistan. The crucial point was that they understand the irreducible cultural heterogeneity of today's world. But the political and cultural universalism of the West makes this arduous and difficult. This universalism is applied to all peoples but does not start and is not born from all peoples. It unfortunately applies standard ethical, epistemological, economic, and linguistic categories, established only by the West, and has become part of the problem, not the solution. And this abstract and imposed universalism has two big limits. First, it fails to perceive the legitimacy of alternative cultural forms to those of the West, and when it does perceive them, it simply gives them an outline and accompanying value. Second, in the West itself, this has created an addictive attitude for the status quo, of which the cultural laziness of Westerners is a sign and proof.

We should try instead to traverse the long and difficult road of cultural polycentrism that goes beyond these two typical formulas—assimilation and multiculturalism—with which the West has tried to manage cultural diversity. Both are well-intentioned but have neither promoted nor made possible interaction between cultures. Both are more or less innocent victims of modern state efficiency and pragmatism. We should learn to create spaces of interculturality so that these different worlds and perspectives not only feel recognized but are able to express themselves in the knowledge that they are being listened to, as anthropologist Thomas Barfield has been advocating for some time, in the specific case of Afghanistan.3 Afghans must not be recognized and listened to only when they repeat and affirm Western categories. They cannot simply be Westerners dressed in exotic clothing. If we do not give them the opportunity and legitimacy to be culturally and politically diverse, we will face extreme, radical, and destructive forms of cultural diversity, such as that expressed in the Taliban world. The only way to combat cultural extremism is the slow and laborious way of cultural dialogue and interaction, which introduces a real tension and serious alternative to Western abstract universalism.

But the universalism of the West, which has not declined but has even been reinforced by globalization, unfortunately finds in Christianity a source of legitimacy. And not only because much of the West is nothing but secularized Christianity, as K. Löwithhad already pointed out. But it has also learned this from its typical binary and dichotomizing language of true-false, good-evil, believer-non-believer. Christianity, and in its wake the West, expresses itself in alternatives. If this is true, the other is necessarily false. If this is healthy, the other is sick. This linguistic and cultural reductionism is criticized by Nietzsche in his book Beyond Good and Evil. He calls it a paradoxical mistake, not of uneducated people but of Descartes, Kant, Schopenhauer, one which we Christians have used as a provocation. But it actually expresses a real drift of historical Christianity that tends to schematize reality, and in this way, the modern world has followed suit and simply secularized. In fact, today we live as secularized people who have perfected and refined this type of thinking and apply it in all aspects of life.

Adventism on its own is an eschatological version of this cultural and religious reductionism because it lives illusorily on a truth that it continues to conceive of as compact and unitary. Adventism has only been able to introduce new themes (Sabbath, lifestyle, Second Coming, last-day events, etc.) but not a different and inclusive language and horizon. For the mainline Adventist, if we truly worship on the Sabbath then all other worshipers are necessarily false. Adventist reductionism combined with Western reductionism has created an intolerant, distrustful, myopic spirit that is now part of the problem and not part of the solution. This perfectionist ethos, typical of Adventism since its inception, has become even more radicalized today because Adventism sees itself as a refuge and stronghold of a compact truth it must defend in times of chaos and moral/religious apostasy. Adventism struggles with a theology that can induce anxiety, even panic in the extreme. It is obsessed with truth, but a denominational (small-t) truth that doesn’t bring either hope or relaxation, but rather can exacerbate mean and fanatical religious instincts. And the fact that we incarnate a “pacific” perfectionism, without guns and bombs, is a rather poor consolation. Adventism correlates with the Afghanistan problem because it cohabits with and courts a purist idea of religious identity that is not open but closed, not vulnerable but overbearing, and above all is a spirit that is compulsive and unreflective about what truth is and what it represents.

2. Giacomo Marramao, The Passage West. Philosophy After the Age of the Nation State, (New York: Verso, 2012).