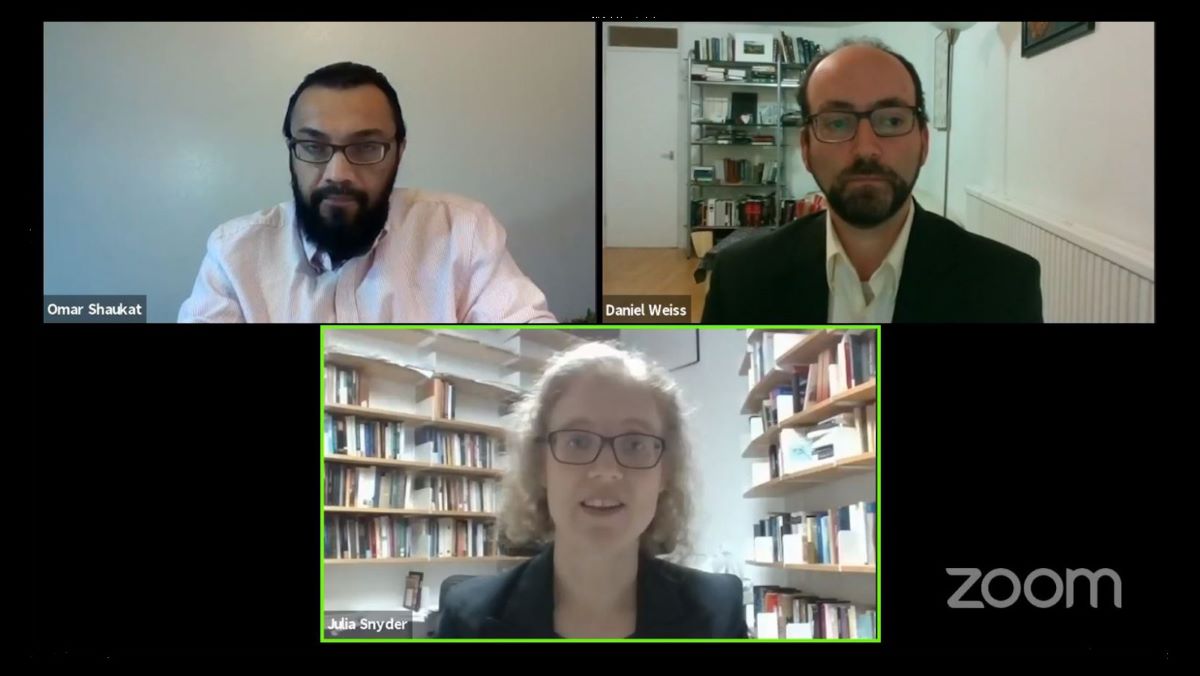 What is the relationship between religious scripture and violence? The 2020 Beach Lecture explored this question – in105 minutes. Holding the lecture online was a ‘first’ in the Beach Lecture’s 22-year history of commitment to religious bridgebuilding.

The second unique quality was the featuring of not one but three speakers – a Christian, Dr Julia Snyder, a Jew, Dr Daniel Weiss and a Muslim, Dr Omar Shaukat – all from the Cambridge Interfaith Programme. Each speaker surveyed the connections between their own community’s sacred texts and human violence. They came up with surprisingly similar conclusions.

Dr Snyder began by exploring the many factors which lead up to an act of violence. She suggested that singling out someone’s religion as the cause of the violence is offering an over-simplistic account of human behaviour. A clear distinction needs to be made between motivation for violence and justifications cited for violent actions – often after the fact. Despite the fact that some violent men cite the New Testament to explain why they beat their wives, she said, ‘there is no evidence of a correlation between religiousness and domestic violence.’ All the speakers demonstrated that in religious communities, ‘people cite scripture all the time in any circumstance and use it as a secondary justification’. They showed how a great deal of violence is also motivated by financial, political, historical or social factors.

Dr Shaukat confirmed the complexity of human motivation as he shared the results of interviews he had done with recruits for ISIS and other similar organisations about their relationships to the Qu’ran. He described how some of his interviewees began their violent activity in response to leftist propaganda which gave expression to their perceived sense of injustice towards Muslims in the wake of 9/11. Only subsequently did they discover what they perceived as justification for violence in Koranic texts and Jihadist interpretations of those texts.

A second area of agreement between the speakers was the importance of not deciding what people will understand from a scriptural text just by reading it yourself – especially if you do not belong to the community concerned. People from outside religious communities rarely understand the role that scriptures play inside them. They all pointed out that within their religious communities, different groups of people are debating the meaning of religious texts. Dr Saukrat recounted how Sunnis and Shias, for instance, disagree on what sort of purity is demanding of Muslims seeking to interpret various Quranic texts accurately. All speakers agreed that discussion rather than avoidance and dismissal are vital routes to inter-faith understanding.

Dr Weiss illustrated what Jewish engagement with religious texts looks like by exploring rabbinic approaches to two texts in the 6th century C.E. Babylonian Talmud - the basis of most contemporary Judaism. Jews believe the scriptures are the Word of God ‘who is good and wants human beings to choose life and blessing,’ he said. He looked at two ‘violent verses’ which came out of a community needing to maintain justice by taking care of victims. Lev 24.19-20 calls for ‘an eye for eye and a tooth for tooth’. Deuteronomy 21:18-21 seems to advise the stoning of ‘a stubborn, rebellious, gluttonous and drunk son’. ‘The value of a violent sounding verse is that it stimulates community discussion,’ said Dr Weiss. He showed that Jews believe that scripture should be treated as something that needs to be discussed within the community. And they conduct that discussion conscious of the broad context of different scriptural exhortations and commitments. ‘Asking questions moves us away from our assumptions and prejudices,’ he said, and ‘makes a community less likely to use violence.’

About 65 people online and many more on social media from around the world were left with more to think about as the Q&A session ran 15 minutes over time to deal with the questions being submitted. The interaction between individuals, communities and their texts had yielded plenty of food for thought. The three lecturers offered further material and willingness to offer interactive engagements via their website and their recent book for which lecture registrants were offered a discount.

The full lecture and Q&A session can be viewed online at https://www.facebook.com/newboldcollege/videos/3362860667136926

This article was written by Helen Pearson and originally appeared on the TEDNews Network website of the Trans-European Division of the Seventh-day Adventist Church.