A Reflection on Race

A Reflection on Race 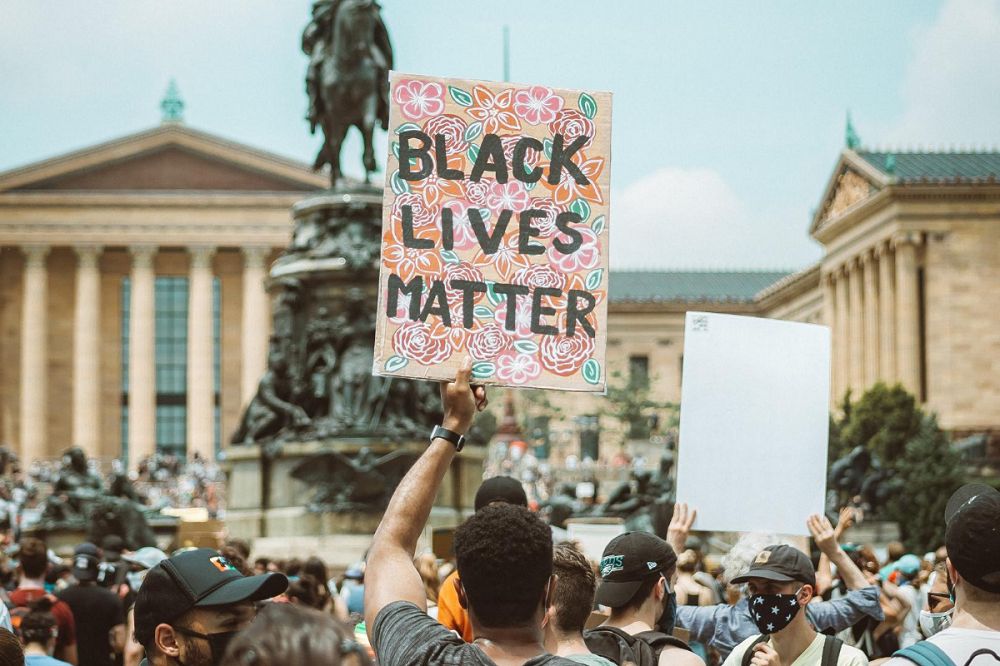 "Black Lives Matter" — the Sentence a Racist Will Not Say

"All Lives Matter" — a Copout Whose Time Has Passed

Sometimes my mind sees connections in stories seemingly unrelated. As in the two that follow:

Scene 1: It's Friday, May 22, 2020, and 23-year-old University of Connecticut senior Peter Manfredonia begins a days-long flight from police, after a string of crimes: the machete killing of 62-year-old (good Samaritan) Ted DeMers and the wounding of another man, in Willington, Connecticut; holding another man hostage in a home nearby, and stealing his guns and truck; driving to another town 70 miles away, fatally shooting 23-year-old fellow student Nicholas Eisele, kidnapping his girlfriend, and forcing her (imagine the terror) to drive him across state lines into New Jersey, bailing out at a highway rest stop.

Scene 2. It's Monday May 25, 2020, about the midpoint of (what would turn out to be) Manfredonia's six-day flight. And some 1,100 miles to the west, George Floyd, exactly twice Manfredonia's age, is arrested for passing a fake $20 bill at a local convenience store in Minneapolis, Minnesota. On his belly beside a police vehicle, his hands cuffed behind his back, he finds himself squirming under the knee of a police officer, digging into his neck.

In the sequel to Scene 1, Manfredonia's family-hired attorney, the very day of Floyd's encounter with police, goes on air with a public plea: “Peter, if you are listening, you are loved…. It is time to let the healing process begin…. We love you, please turn yourself in.” The following day the Connecticut State Police join the appeal: “Peter, this is ‘not who you are’…. We want you to be able to tell your story. We are here to listen to you…. Your family has hired an attorney…, and your rights will be safeguarded.”[i] One day later, Manfredonia is apprehended in Maryland without a scratch.

In the tragic sequel to Scene 2, Minneapolis police officer Derek Chauvin, callously ignoring the victim's repeated plea ("I can't breathe!"), as well as the persistent appeals from people on the street, keeps grinding Floyd's neck into the pavement with his knee, for 8 minutes and 46 seconds, suffocating him in cold blood.

No two cases are exactly alike, of course. But many cases together can reveal a pattern, exposing the dark mosaic I'm trying to describe. Names like Tamir Rice come to mind: a 12-year-old boy playing with his toy gun in a Cleveland, Ohio park, November 22, 2014. A police officer arrives and shoots him dead, no questions asked. Eric Garner of Staten Island, New York, 43-year-old father of six, killed July 17, 2014 in a police chokehold — for selling loose cigarettes on the street without a license. Then there was Freddie Gray, and Walter Scott, and Dontre Hamilton, and Rayshard Brooks, and a host of others. In the five years from 2014 to 2019, Blacks in the United States were killed by police at almost 2.5 times the rate of Whites: 13 per million for Whites, 31 per million for Blacks.[ii]

The stats are bad enough, but often it’s the sheer triviality of the offences that drives me crazy. A broken tail light, selling loose cigarettes without a license, walking home from the store and looking suspicious, running away from police, falling asleep in your car outside a Wendy's, or, like Breonna Taylor, lying asleep in the middle of the night on her own bed.

Blacks are not the only ones to encounter racial bigotry in the United States. Ask Native Americans. Ask Hispanics Americans. Ask Asian Americans. With the coronavirus being labeled "the Chinese virus" — or even "the Kung Flu" by the highest office in the land — some Asian Americans are "being told 'go back to China' or having people spit in their direction."[iii]

But when it comes to sustained, naked bigotry in America, Blacks take the cake, hands down. And the mosaic of their suffering is dark.

The Situation in the Church

In a letter to Review and Herald editor F. D. Nichol in 1963, I inquired (as a young Caribbean Adventist) about the racial division in the American Adventist Church at the time. Nichol responded with a kind letter, in which he wrote, in part: “We are a peaceful people, seeking to move onward toward the kingdom while stirring up the least of political strife and emotions as possible. In this we follow the example of the Bible writers. We do not find Peter or Paul or the other apostles going out in a great campaign to abolish slavery.” Instead, “they tried gradually to inject the gospel… into the hearts of men and women, and thus strike slavery at its roots.” “In general,” he said, “I think we are coming along very nicely in this country in an attempt to find a solution of the problem of race.”[iv]

Coming at the issue from the other end of the spectrum, Elder Nichol clearly shows a patience I do not have. When I encounter racism, as someone from the Caribbean, I'm not thinking: “Please, please accept me for the human being that I am — please!” Instead, I'm thinking: “What an uneducated idiot, for failing to recognize another human being for what they are!” (And by "uneducated" I'm not talking academic degrees or distinctions. Rather, I'm talking about a certain enlightenment, a certain elegance, a certain cultural sophistication, a certain decency, a certain je ne se quoi.

Has the Nichol strategy of quietism and gradualism worked after 57 years? In a powerful Spectrum article just over a year ago, Daniel Xisto, a white Adventist pastor, described the overt racial slurs and behavior he has witnessed among fellow Caucasian Adventist pastors and leaders over the years.

And he told what happened when he preached at a Virginia Adventist church, following that bloody 2017 "Unite the Right" rally in Charlottesville, Virginia — a rally that featured Neo-Nazis carrying tiki torches, and KKK members in their hoods. "I'm not ok because white supremacists, white nationalists, Neo-Nazis, KKK members, and other domestic terrorist groups thought they could come into my town and cause my friends to fear." The moment that opening sentence left his lips, "several people in the congregation stood up and walked out…." At the end of the sermon (which was about unity in Christ), several church leaders made their objections known, and one elder later went to his home to emphasize that although no one at the church was a member of the KKK, almost everyone knew someone who was, and that, therefore, he ought not to preach that kind of sermon there again.[v]

I feel sure not many Adventist congregations would react that way. But the deeper question is: How many others might harbor silent sympathy for that response?

But in the wake of the George Floyd killing, Adventists have been making a lot of welcome noises. Former North American Division (NAD) President Dan Jackson issued a strong statement in early June.[vi] And Adventist Review has carried several solid pieces on racial justice. In addition, many Adventist pulpits have delivered muscular sermons on the subject — among them Loma Linda University Church, Oakwood University Church, Pioneer Memorial, Sligo, and many others. Like the Seabrook Adventist Church in Lanham, Maryland, whose (Hispanic) associate pastor Jimmy Muñoz preached two successive Sabbaths in July, wearing a "Black Lives Matter" t-shirt, with the same slogan draped behind him on a sofa.

But from certain important quarters of the church there is silence. And those of us who have watched this phenomenon over the years are well aware of a certain group of "concerned members," so to say, who have mastered the art of lying low and striking at just the opportune time. They don't mind seeing Blacks and other minorities in what might be called "supporting roles." But when it comes to filling the "highest" positions in the church, that's when they flex their muscle.

In my memoir I tell a story that symbolizes the nexus of racism and money in the church. In the wake of Robert Folkenberg's resignation as General Conference president in February 1999, the committee finally came down to just two names, one Caucasian and the other African American. During a break before the vote, the NAD convened a meeting of its officers and union presidents to develop a coordinated strategy for the impending vote. "During the special confab, when it appeared that support was building for [Calvin] Rock's name, (then) NAD president Alfred C. McClure spoke up: 'There are wealthy people in the church,' he said, 'who will withhold their support if Rock becomes GC president.'"[vii] And we know the outcome.

Election time. That's when our true colors show. And the test going forward will be whether in the midst of election fever, all races and genders will have an equal chance. Many have noted, for example, the resistance to electing African American males to General Conference presidential spots, for fear of setting in motion risky scenarios of succession. How I dream of the day when the race or gender of people elected to these positions would be completely un-remarkable.

Thank God for our Adventist pioneers — people like Ellen G. White, James White, John Byington, Joseph and Prudence Bates, Charles M. Kinney, and a host of others — who "made protest against racial injustice inseparable from their Adventist faith."[viii] Their principled stance in defense of justice is why Black Americans remain in the Adventist Church today.

In his novel, Little Dorrit (about the bleak Marshalsea prison for debtors in 19th century London), Charles Dickens talks about something called “the Circumlocution Office” — the government agency responsible for processing citizens' requests for documents, papers, licenses, and the like. People would return again and again and again, only to be told to come back, or to apply to another office, or be given some other excuse. Dickens referred to the agency as “the burial ground of hope.”[ix]

And for decades following the Civil War in America, that was the plight of Blacks, as they were told to wait, to come back, to apply again, to try another place. Every form of subterfuge (in regard to jobs, and schools, and housing) was used to keep them in their place, and preserve that precious legacy of White privilege and entitlement.

But beginning in the 1960s, locked doors began creaking open, leading to the now well-known ebb and flow of progress and retrenchment, advancement and setbacks, for yet additional decades. Now it seems as if that tragic event in Minneapolis last Memorial Day has touched a nerve. In that gruesome, slow-motion murder of George Floyd, a line was crossed, putting centuries-old abuses of Blacks in bold relief, the graphic killing searing its way into the collective global consciousness. Millions took to the streets, the coronavirus pandemic notwithstanding, demanding justice. Demonstrations spanned the entire country and stretched around the world, to include improbable places like Wales, Bangkok, Turkey, Kraków in Warsaw, and Bulgaria.

As Adventists, what should be our posture?

But as Adventists, we must say it. It's an affirmation of the gospel. And it is present truth.

[ix] I picked this up from watching the movie, Little Dorrit, so I don't have a book reference to give.

Roy Adams has served the Adventist Church as high school teacher, pastor, seminary professor and, until his retirement in November 2010, for 22 years as associate editor of Adventist Review/Adventist World. He lives in Maryland with his wife Celia.

Photo by Chris Henry on Unsplash