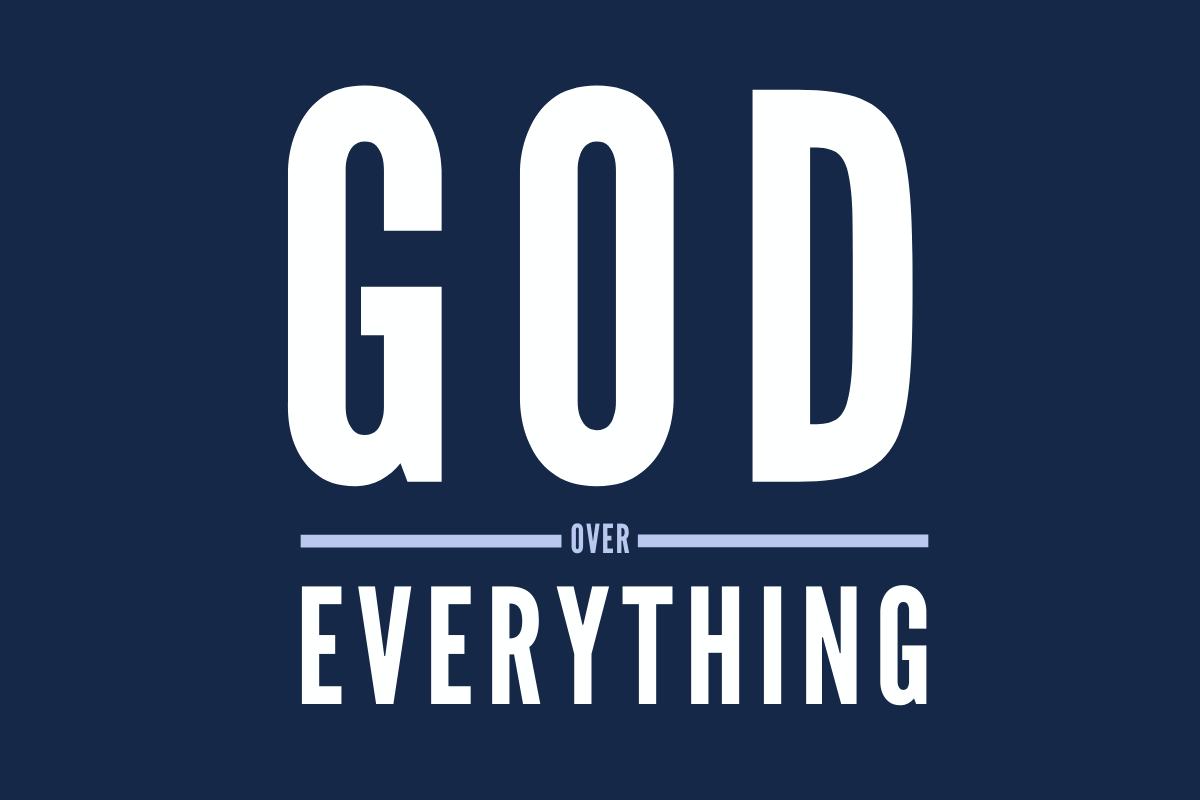 Driving to work several days ago I passed through an intersection where, on its corner, stood a man and his young boy.

I live in Arizona, it’s hot here. It was already 90 degrees, and not even nine o’clock.

Due, I’m sure, to the outrageous heat, the man was wearing a tank top. The shirt sported the word “GOD” in big, bold lettering right across the chest. Underneath was another word, blocked by his young son’s head of unkempt hair. Looking intently as I passed, I finally made it out.

The phrase is nothing new to my ears. I’ve heard it tossed around Christian, Protestant, Evangelical, and Adventist circles since I was the age of the young lad who kept me from reading it. God over everything. Nothing is as great as God. Nothing deserves our attention, our focus, our resources like God. God over everything.

Looking through the lens of history many a great atrocity has been committed in the name of God, for the name of God, with the name of God because we put the name of God above everything. While a popular place to reminisce, the crusades paint a vivid portrait of what happens when a misunderstood or misinterpreted God becomes more important than everything else. Death, decay, and dying as a result of greed, power, and desire.[1] And we could find infinitely more examples of this human pattern, from the very dawn of time to the modern age.

Yet, as Adventists, centering our hermeneutic on Christ, the self-sacrificial, only-loving, always-stooping Deity revealed to us on the cross, we perhaps ought to come to a very different conclusion as to what “God over everything” really means.

First of all, it’s important to note that Jesus made some people very mad. Mad because he started doing new things. Things which had never been done before. Things which had never been thought of before. Things which made those in power very uncomfortable. And I’ll be the first to admit it, if I hadn’t been steeped in Christian culture my entire life, some of this stuff would sound really weird. For instance, “Blessed are the Poor,” or “Do not worry about your life,” along with “Love your enemies,” and my personal favorite, “Eat my flesh and drink my blood.”[2]

Jesus was a really weird dude.

So, when the religious leaders of the time heard teachings like these, they had to step in. They had to stop this madman. And they did. Matthew details one of the best showdowns: First the temple disciples go in to question him. Then the fundamentalist Sadducees. And finally, the “progressive” Pharisees themselves, the big guns of the Judaic religious army. These were the fellas with the training, the ones with the experience, and the head-knowledge. We’re told that the Pharisees were “distinguished by their strict observance of the traditional and written law which gave them pretensions of having a superior sanctity.”[3] These dudes were the top dogs and they knew it.

We pick up the story in Matthew 22:

Hearing that Jesus had silenced the Sadducees, the Pharisees got together. One of them, an expert in the law, tested him with this question: “Teacher, which is the greatest commandment in the Law?”[4]

So, this is a scholar who has been selected for the set-up, and he has formulated this question with such perfection, that he doesn’t think Jesus will have a sufficient answer. And it’s a good question, a trick question, a question that actually has Jesus take the bait:

This is the first and greatest commandment and what? What is of equal value to the greatest?

And the second is like it: Love your neighbor as yourself.[7]

This is classic Christianese, so let me translate this to save you some time: Jesus is saying that the second is equal to the first. Second in sequence, yes, but not in distinction. Meaning they go together, they are one. By loving your neighbor as yourself, you are loving God.

And this is oh so important, because in the religion Judaism had morphed into since their incredible deliverance from Egypt you could, on paper, love God without ever really loving those right next to you. Sadly, this is how most religion operated in the 1st century and, for the most part, how it continues to operate to this day. But Jesus, the guy who freaked people out with his weirdness, said “No. No, we’re going to inaugurate something new. Something different. Something better. And so, the way you think all of this is supposed to work is going to need to change. That’s why I’m here: this has got to change, and it starts with me.” So he says this:

All of the Law and the Prophets hang on these two commandments.[8]

Because everything over God is God over everything.

Maybe I should make tank tops.

Niq Ruud is a young pastor and author living in Arizona. He co-hosts The Young Project podcast and studied at Walla Walla University as well as Grand Canyon Theological Seminary. You can connect with him online at niqruud.com and on social media @niqruud.