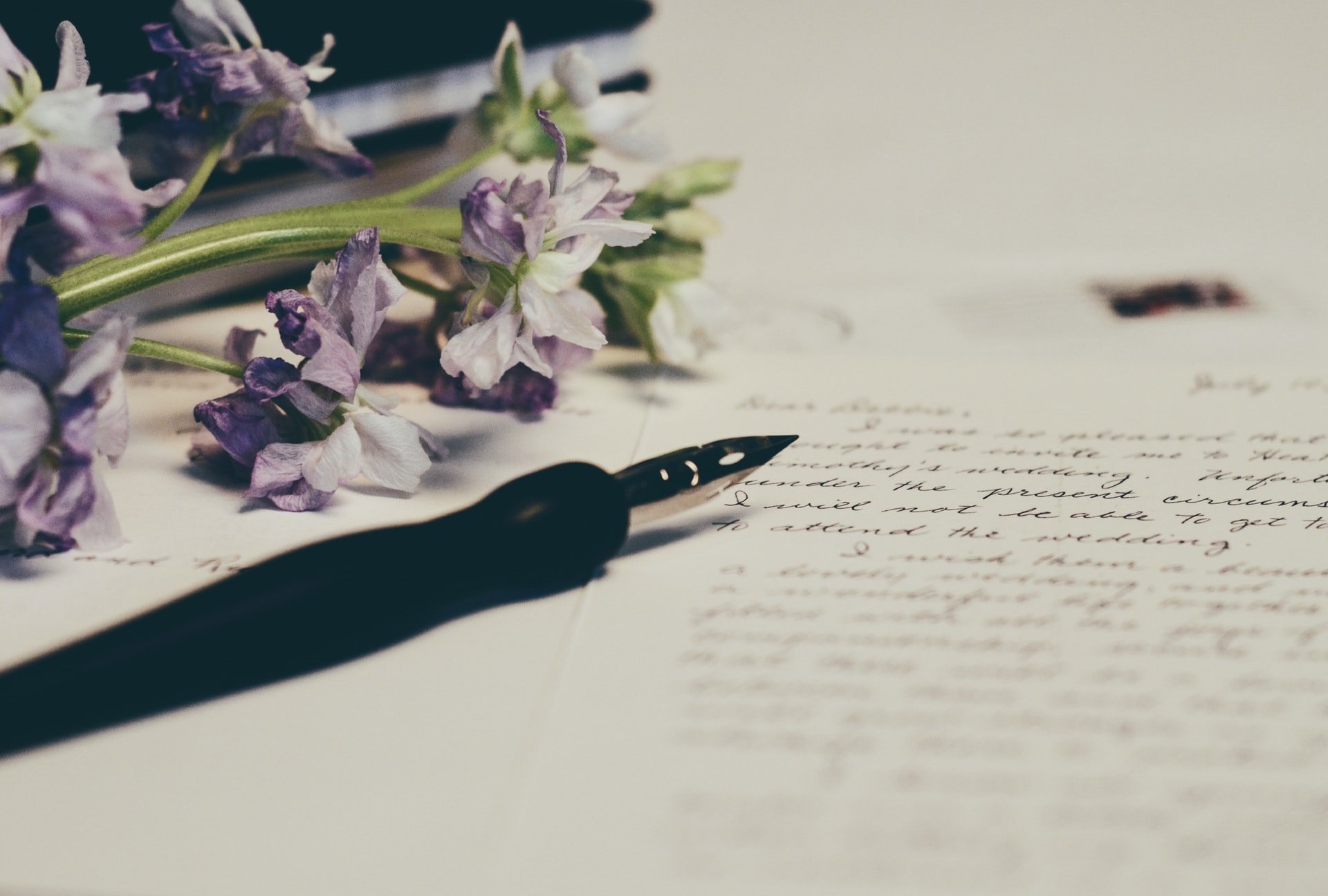 Author’s Note: This post features a letter to a friend in response to a Facebook post. Initially, I was going to ignore her post, but after much prayer and consideration, I felt obliged to respond.

I want you to know I love you. You are my sister-in-Christ. You are my friend. I hope you will receive this with the love with which it was written.

After a very difficult week, I went on Facebook a few days ago for a bit of mindless respite. At the top of my newsfeed was your post:

“Black vs White. Racism needs to stop on both sides. When I look at you I see a person. I am white. I am tired of getting a label because of what some “evil” person did to another. It is an issue of GOOD vs EVIL that we need to be talking about! There are good and bad whites. There are good and bad blacks. I sat in the dirt and played right along with black kids growing up. I am not the same as you, but I am no different. I love me some black people, lots of them. I did not enslave your ancestors either. Someone way back, before I was born did that. I was molested, beaten, slandered and used when I was growing up too. I had to make a choice to move on. I had to make a choice to make it better. Jesus saved my heart. We live in a broken world full of good and evil people. Let us good people get on our knees and pray for the evil ones, the unjust ones, and let’s stop this racism. Jesus said pray for your enemies. If the law is broken someone deserves jail, white or black. These bandwagons and riots to stir everything up aren’t helping the problem to go away. Did you pray about it first? Can we just show some love? Can we just be kind? Pray for the police commissioner when an officer does something wrong. Pray for the judges. Pray for justice, but don’t do it because of black and white, please!! Do it because good is better than evil. Do it because Love is better than hate.”

On the surface this seems like sound, good counsel. I agree with many of your points. However, it misses the mark in some ways. It fails to realize the complexity of human experience in general and of Black experience in particular. It fails to recognize the unique circumstances of African Americans and all people with brown skin who live in this “land of the free.”

A lot of people misuse the word “racism.” They use it as if it is synonymous with prejudice, but it is not. Racism is “prejudice, bigotry, stereotypes, and discrimination that is systematically enforced by people with more institutional power, authority, and resources than others to the advantage of that group over others” [Patti DeRosa, ChangeWorks Consulting]. To be racist one has to have access to institutional power — the kind of power that affords one the benefits of all the systems in place [almost] without question. The kind of power that presumes one is indeed innocent until proven guilty and is at least entitled to a fair trial. The kind of power that allows one to be treated humanely and even make it to the prison cell alive and not have one’s life weighed in the balance by trigger-happy police officers and emboldened citizens taking “the law” into their hands. Black people can hold prejudices, but we cannot be racist. Why? Simply because we lack access to institutional power. This was the case even when the President of the U.S. was Black.

While it might be a question of good and evil in the spiritual realm, in these United States no matter how good a Black person is, in interactions with “the Law” and in the court of media and society, he or she is considered evil. Indeed, within a few short moments of the revelation of the unequivocal guilt of a white person in the murder of a Black person, media outlets go far and beyond to uncover some stain in the victim’s character or record that serves to justify the brutal murder. In the cases of the murder of Black men, women, children at the hands of white men or the word of white women, too many feel the need to vilify the victim to make the heinous act less villainous.

Have you noticed how the trials of murderers of Black people are entitled against the victim and not the assailant — e.g. the Travon Martin Murder Trial? As if the dead victim committed the crime and is indeed on trial? 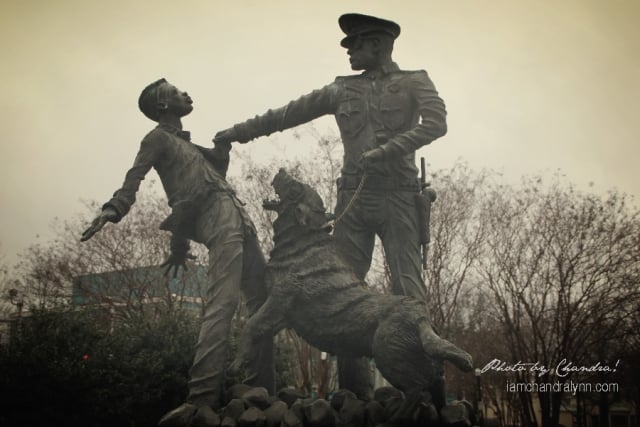 I’m not sure how slavery entered this particular conversation, but since it has, we need to recognize slavery as America’s deep, dark, wide-open secret. We are in this particular situation because [as a nation] we don’t want to go to the place of our original wound and really have the dialogue about the horrors of that system and about its consequences some 155 years after its purported end. The fact of America’s defective past is very much part of its present. It is not, then, that Black people can’t “move beyond” slavery; that horrific past is very much a part of our present in this nation. The abuse Black people suffer did not end with slavery. It is ongoing — continual. 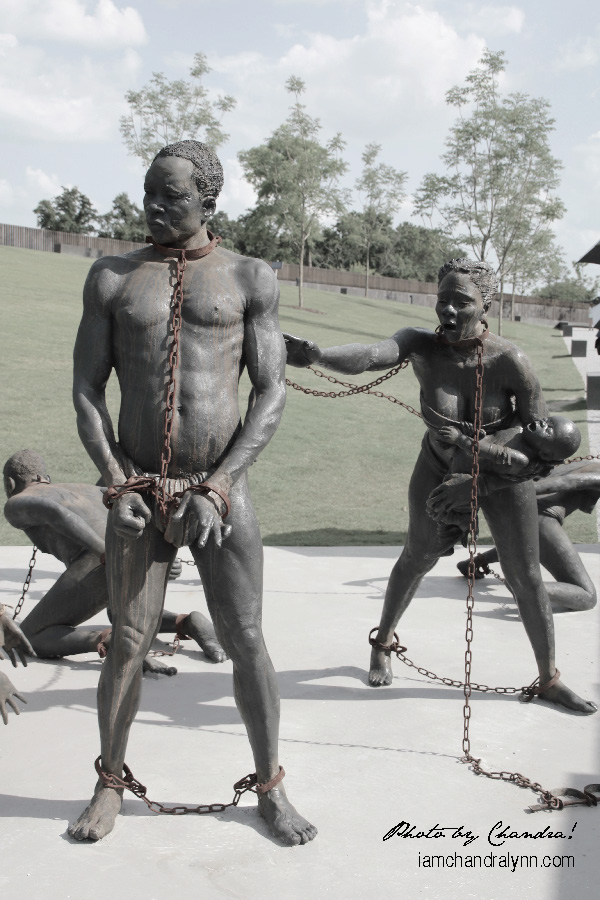 I’m incredibly sorry about the pain and abuse you experienced as a child. That was horrible, but please, please, please be careful not to assume that because the two situations are alike in one way, they are alike in all ways and must be met with the same antidote. This is a logical fallacy, a “false analogy,” to be exact. Private, individual pain — though horrific — cannot compare to 400 years [and counting] of ritualized, systemic abuse of an entire body of people because of the color of their skin.

Imagine experiencing the abuse you suffered as a child every day of your life. Imagine all of your progeny for generation after generation experiencing what you went through every single day because of a genetic trait.

You decry the idea of people making assumptions about you based on the color of your skin. Imagine walking with assumptions every waking minute of your day. Imagine the danger of those assumptions when you are Black in America.

Recent events give many, many examples of the dangers of those assumptions — Ahmaud Arbery, a Black man out for a jog murdered by white men based on an assumption; a white woman using the fact of state-sanctioned murder of Black bodies as a weapon against Christian Cooper, a Black man bird-watching; George Floyd, a Black man smothered to death in plain sight of others by a police officer who was comfortable enough with the status quo that he murdered an already incapacitated man with the same carelessness with which one would swat a fly. No remorse. Whatsoever.

Because of such assumptions, Black people are not safe. No matter where we are: in our homes sleeping like Breonna Taylor or playing video games like Atatiana Jefferson; walking home from the store like Trayvon Martin; driving in our cars like Philando Castile and Sandra Bland; playing as any little boy would with a toy gun like Tamir Rice; sitting in our grandmother’s backyards like Stephon Clark. I’m not sure we’ve ever been safe while sitting in church.

We breathe with the knowledge that someone, somewhere at any moment of the day can decide that we don’t matter, that our lives don’t matter. We. are. not. safe. 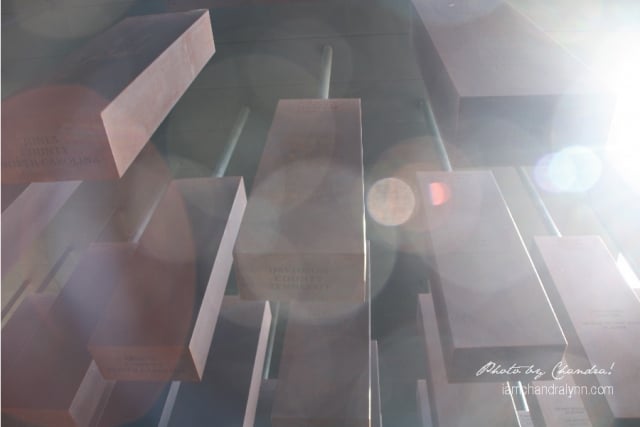 While your pain was/is real, it is not the same. At some point, you were able to extricate yourself from your abusive situation. To make a choice. To pray. To heal. To give your family a better, healthier experience. Black people have little to no control over what happens when other people’s racist attitudes and behaviors clash with our will and right to live healthy, whole lives. No matter how good our beautiful sons, daughters, husbands, wives, fathers, mothers, nephews, nieces, cousins, friends are, no matter the right choices they make, no matter their prayers, someone can still decide they don’t matter. Their lives don’t matter.

So please be careful, my friend, how you hold the conversation with those of us who are racially oppressed. If you are to be an ally and exercise the kindness and compassion you advocate, be careful to release any inclination to counsel oppressed people on how to respond to oppression.

It seems to be a trend to fling the nice and easy words of Martin Luther King, Jr. into the faces of Black people in times like these. He was far more radical than the pacifist many believe he was. I invite you to look at a fuller selection of his body of work. Riots may not be the answer, but they are what happens when people are in complete despair and have run out of capacity for the overwhelming stress and emotion. All of the exhaustion, anger, sadness, weariness, and powerlessness spill over and there is no other response to the steady blows of trauma. King spoke about that, too. 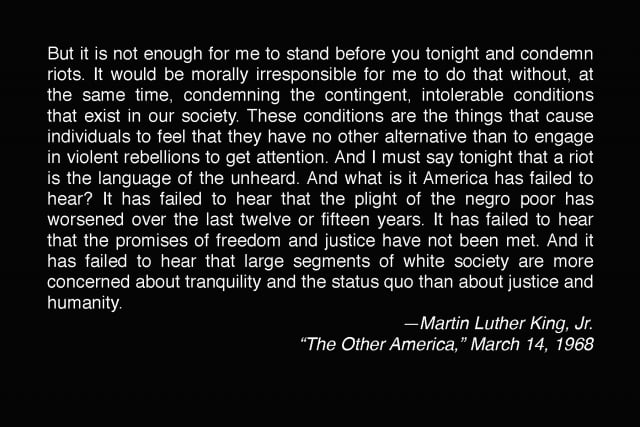 As a Bible-believing, fervent-praying Christian, you will get no disagreement from me about the power of prayer, but I’m compelled to remind you, in the face of injustice, scripture doesn’t tell us to pray. Scripture directs us to act:

Learn to do right; seek justice. Defend the oppressed. —Isaiah 1:17

It is because I know Jesus Christ — He who is at once the Lamb of God and the Lion of Judah — that I am compelled to pray and act.

Sympathy and prayer are not enough. Protests are useful but not enough. Termination of the officers is a start but not enough. Arrest of the murderers is a beginning but not nearly enough. It is time to “turn over some [figurative] tables” and do more than ask, “Can we all just get along?” It’s time to do the hard work of undoing what centuries of social conditioning have done to convince far too many that Black people are only like real people — a little less human than the rest. It’s time for our nation — individually and collectively — to muster the courage and have the excruciating conversation so these atrocities can stop repeating and we can finally heal.

Yes, ultimately, we are involved in a war of good versus evil, but good is already defeated if we keep losing the battles to racism, injustice, and the like.

If you and I are to meet on the other side of Jordan, then we are to do exactly what God requires of us:

to be just, and to love [and to diligently practice] kindness (compassion), And to walk humbly with [our] God [setting aside any overblown sense of importance or self-righteousness]. —Micah 6:8 (AMP)

Love to you as we march onward… together.

Chandra Tyler Mountain, Ph.D., is an English professor at Oakwood University and a scholar in women’s and Africana literatures and theory. When she is not with her guys, in class or her sunflower-brightened office, she is usually roaming, camera in hand, shooting beauty and inspiration, or sitting quietly in the shade of a tree drawing flowers. As a creative writer, she writes poetry, short prose, inspiration, and creative non-fiction. She also maintains Pics and Posts [https://iamchandralynn.com], a weblog about snail mail, photography, and the beautiful facts of life.

This article originally appeared on the authors blog and is reprinted here with permission.

Main photo by Debby Hudson on Unsplash. In-line images courtesy of the author.