Care and Politics in the Time of Coronavirus 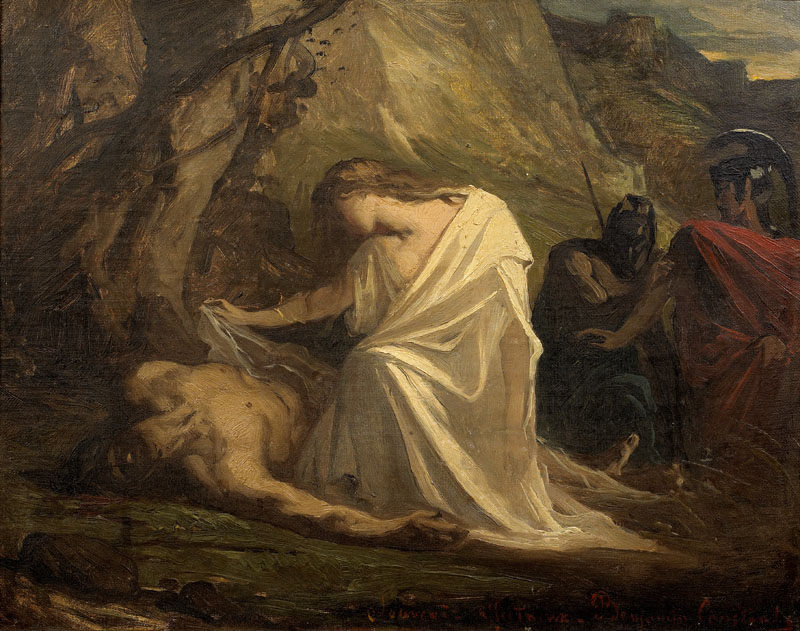 Humankind has not changed. The balance between good and evil, in their individual, corporative, moral, medical or political forms, is always at the center of what we do. And how we choose between them shapes who we are and who we are becoming.

Some 2,500 years ago, Sophocles posed this dilemma in the classic Greek play Antigone. Oedipus had just passed away in Colonus, and Antigone and her sister Ismene decided to return to Thebes with the intention of helping their brothers, Eteocles and Polyneices, avoid a prophecy that predicted they would kill each other in a battle for the throne of Thebes. All four siblings were the tragic incestuous children of Oedipus and Jocasta.

A bloody, self-destructive war was finally over in Thebes. The brothers, Polyneices and Eteocles, were to reign jointly, in alternating years. But when Eteocles refused to turn over the reins of power, Polyneices rebelled and civil war erupted. Upon her arrival in Thebes, Antigone learned that both of her brothers were dead. Eteocles had been given a proper burial, but Creon, Antigone's uncle who inherited the throne, issued a royal edict banning the burial of Polyneices, who he believed was a traitor. This was to be a lesson to any who would dare challenge the authority of the king. His body would rot publicly. Putridly. Shamefully.

This did not set well with the military leader Thersites, who repeatedly pleaded that every soldier, whether friend or enemy, should be treated in death with respect. That was fine with the prime minister – "the law is the law" and should be obeyed. That is, until he changed his mind, as politicians are very often prone to do, because of the circumstances and benefits they desire to have succeed.

But Antigone would not go along. She loved her brothers, both of them. She decides to bury Polyneices herself, with her hands and the dust that floats a death cloud over the fighting plane. She'll do that even at the ultimate price of her own execution. Her determination, her steeliness, begins to influence the servants of the castle. The ones who never have choices, the ones to whom things are “done”. Those who have become “objects” in a world of power. They come to want what Antigone wants: a show of respect, a resting place for her brother. They too have lost loved ones in this perverted war. In Antigone, Care has won over political realism and cynicism. There are human imperatives of respect, and no political or social institution should ever force people to disregard Care.

Antigone's sister Ismene doesn’t understand her sister's single-minded determination. Ismene herself, shouts, demands, threatens, begs, tries to cajole. All in vain. Finally, she gives up. At the end, the law is the law. You have to obey. The king’s ordinances, in her mind, are God’s ordinances. You need to accommodate your convictions in order to survive. Ismene is the feminine expression of Creon’s mediocrity, inflexibility and superficial care.

Of course, Antigone meets a tragic end, but it is death by her own hand, the night before she is, ironically, reprieved by the king. Meanwhile, not realizing Antigone has taken her own life, the blind prophet Teiresias, Creon's son and Antigone's fiancé Haemon, and the Chorus plead with Creon to release her. Creon finally relents, but in an instance of too-late-timing, finds her dead in her jail cell. Out of despair, Haemon and Creon’s wife have by now also killed themselves, and Creon is left in distress and sorrow.

The political, iron-like and inflexible power Creon is left with, is chillingly empty. He is not a bad man. Indeed, he is a good man with some wrongheaded ideas and a predilection to thoughtlessly decide too quickly what should be done. His resultant aloneness is itself tragic. Nobody remains. No dignity is left. No Faith, no Hope, no Love. The present and the future are desolated. Life has disappeared.

In a sense, this Pandemic COVID-19 is like a tragedy with its web of actions, reactions, inactions, retractions and pro-actions. Beyond the drama of lives lost and infected, as much as Antigone’s tragic plot, this Pandemic has surprised us all – individuals and institutions – by clearly showing the limits of our Public Health predictions, the fragility of our economic inferences and the paradox of our political and social strategies.

At this writing more than 4.34 million people have been infected in the world and at least 296,000 have died from COVID-19, according to a Johns Hopkins University report. The USA has become the new epicenter with 1.43 million people infected and 85,000 deaths. The United Kingdom has become second by total deaths, surpassing Italy. Russia is now third.

The United Nations is forecasting that the coronavirus pandemic will shrink the world economy by 3.2 percent this year, the sharpest contraction since the Great Depression in the 1930s, pushing an estimated 34.3 million people into extreme poverty, mostly in Africa. At the same time, US states and most of the European countries are beginning to restart their economies after months of paralyzing lockdowns, but health experts have warned of a rebound of the virus.

The medical and socio-epidemiological management of the pandemic, evidenced in the courageous and strong-minded presence of the National Institute of Infectious Diseases’ director, A. Fauci, is giving way now to political decision-making. But the necessary, national and international, political handling of the situation collides inevitably with the paradoxes and contradictions of politics. That’s visible in US-China relations which, even before the COVID-19 crisis, had entered a particularly mistrustful and combative period. The current global pandemic has created a human catastrophe not seen outside wartime. But rather than being a reason for China and the US to come together, COVID-19 has been an accelerant in their hostilities. American resentment toward China has increased dramatically, stoked by the explicit efforts by the Trump administration to pin the blame for all aspects of the pandemic on the PRC.

Something can be done. Something has to be done. It’s no time for conformity and resignation. It needs to be a time of social and political actions. But here, the necessity of visionary and courageous ethical and political actions must not lead us to forget the lessons contained in Antigone. Antigone must not be reduced to a sentimental or moral narrative of a single human’s dilemma. Antigone has enormous cultural and political potential. And one important lesson to learn from it is given by the American philosopher Martha Nussbaum. In her book “The Fragility of Goodness” she dedicates an important chapter to comment on Sophocles’ Antigone. And essentially she says that the best actions are not the purely goal-oriented and inflexible actions, but rather the “vulnerable actions” which start by perceiving the limits of their original position and at the same time envision the possible paradox of the obtained results. This double fact, instead of diminishing their potential, rather increases the possibility of human flourishing and fulfillment.

Nussbaum favors the insights of tragic works because they explore such themes as human goodness, fragility and external circumstances we can’t master as human beings. Tragic works focus particularly on the vulnerability of human lives toward fortune, circumstances and conflicts among commitments. Tragedies also present alternative conceptions and evolving complex patterns of deliberation. As Nussbaum concludes in another of her books, “Political Emotions. Why Love Matters for Justice”, the best political actions are those which, in time of crisis, succeed in preserving their intrinsic vulnerability and fragility as guarantee for their accomplishment. Even when they are tempted the most to go for the essentials, overlooking and dismissing Love and Compassion as unnecessary.

This might be what United Nations General-Secretary Antonio Guterres had in mind when, in a video address late on Wednesday, he urged governments, civil society and health authorities to urgently address mental health needs arising from the coronavirus pandemic, warning that psychological suffering is increasing. Guterres pointed to “grief at the loss of loved ones, shock at the loss of jobs, isolation and restrictions on movement, difficult family dynamics, and uncertainty and fear for the future. After decades of neglect and under-investment in mental health services, the COVID-19 pandemic is now hitting families and communities with additional mental stress.”

We Adventists certainly have something important to do in this period of world crisis. But let’s not speed up. It’s not easy to know what should be done, and particularly what others really need. But that’s a blessing. That’s probably what Nicholas of Cusa understood by “Docta Ignorantia” (Wise ignorance). And in the end, this fact can help us to help others better, plus become better persons ourselves in order to really care for people in need beyond the benefits we can get from it. Pragmatists that we are, we’re too used to helping others while making sure that this also makes us stronger and greater. The sense of fragility and vulnerability, as expressed in the tragic characters of Antigone, is not familiar to us. And our voluntaristic mind-set has also affected our reading of the Bible.

But Antigone’s tragic sense of life can remind us that, between actions and effects, there must certainly be a relation based on desire and aspiration. That makes our actions human and future-oriented because, in this way, they awaken hope. And this relation is not mechanical. It’s mediated by character, feelings, surprises, paradoxes, asymmetries that delay, modify and transform its effects, making them sometimes unpredictable. And a healthy identity, individual or corporate, as much as healthy ethical, social or political action, is that which has learned to welcome with trust and hope the Unpredictable. That is what Aristotle called “Phronesis” and Ecclesiastes calls “Chokmah” (Wisdom). This world crisis certainly asks for dedicated and hard-working people but, above all, for wise people – religious or not – who are able to care beyond the certainties of legality and institutional policies.