Willing Hostages: The Enabling Power of Silence in the Trump Era 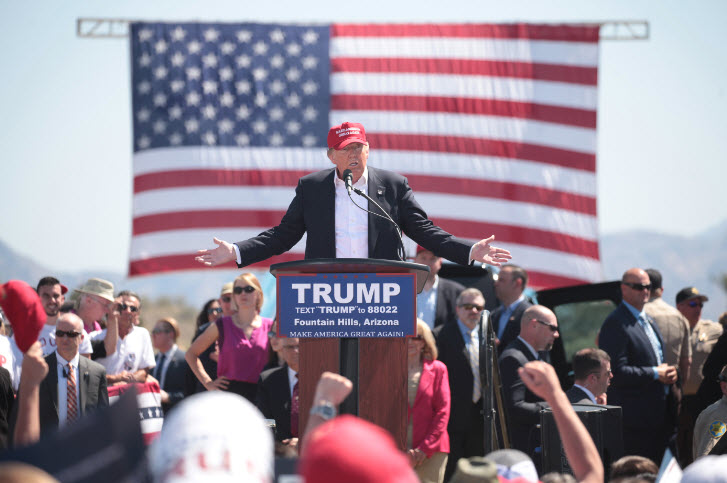 It happened in Stockholm, Sweden in August 1973. A paroled convict bungled a bank robbery resulting in four employees being held hostage in a bank vault for six days. When it was over, none of the freed hostages would assist law enforcement in prosecuting the robber. Rather, the former hostages set about fundraising for their captor’s defense. And with that a new diagnostic category – Stockholm syndrome – a phenomenon in which hostages develop positive affections for their captors, was introduced into psychology.

I was reminded of this episode following a recent incident at one of President Trump’s MAGA rallies. Thinking a supporter at his New Hampshire event was a heckler, the president put on a fat-shaming show that would have earned an elementary student a trip to the principal’s office. In a voice dripping with mixed derision and disdain, typical of backyard bullies, the President of the United States derided: “That guy’s got a serious weight problem. Go home. Start exercising.” – to the uproarious delight of his crowd.

But it was the chastised supporter’s reaction that got me thinking again of the Stockholm Syndrome. When a reporter asked for his reaction to what had just happened to him, Ralph Dawson, the subject of this public dressing-down, dismissed the personal insult and had only praise for the president. “Everything is good. I love the guy. He is the best thing that ever happened to this country.” Maybe the initiated are incapable of perceiving the apparent dissonance, but for we outsiders looking in, Dawson’s response seems disturbingly enabling of the president’s bad behavior.

Before Trump became president, any holder of the nation’s highest office who openly did anything remotely similar to what he did in broad daylight to this man would have spent an eternity apologizing. Then he would be begging the American electorate for forgiveness, blaming the whole thing on too much work and little sleep, or a momentary lapse in judgment. Not President Trump. Even the simple art of gracious apology has fallen victim to his braggadocio. He doesn’t apologize because his handlers have convinced him his base will think him weak if he did. So the word “sorry”, one of the most disarming words in God’s dictionary, is banned from his lips. He will not and cannot utter it, no matter how outrageous his conduct or obvious the need to say it. No wonder we, the citizenry, are in a state of exhausted numbness, unable any longer to determine or define normalcy in public discourse.

But we should be careful not to share in his blame. He bears it solely and should shoulder its festering brunt. For how do we define what is appropriate public behavior when the president relishes mocking a journalist, not for what he writes, but for his physical disability, to the cheers of his fawning admirers? He trains his ire on “strong” women he dislikes, describing them variously as “ugly”, “slob”, “pig” and “grotesque” – ginned-up by his base. Aspiring non-European immigrants are singled out: they are “rapists” and drug pushers consignable to holes not fit for human habitation. But since they could take jobs from the right type of Americans they are fair game to dehumanize. In Charlottesville, the president attempted to sanitize and confer White Supremacists with respectability, contending “there are good people” among them. Even when a young lady lay dead, a direct result of their actions. The past three years of the Trump presidency has indeed been an education in political absurdity.

A moment ago, I suggested that the president bears the sole blame for creating the discordant national mood. I take that back, because it is only partially true. The reality is that the president has powerful compatriots who should be called out for their enabling disservice to the nation. Once when decency was a prized commodity in the political marketplace, the religious community, especially those right of center, would have been outraged by any president who showed such recklessness in his public dealings. But that is now routine with our current president. For years Evangelical leaders appropriated for themselves custodianship of public and sometimes private morality. Now all we hear from them is deafening silence, which could be attributed to cowardice or complicity in the face of Trump’s unending public diminution of the presidency.

Unlike hostages who share the same restrictive environments as their captors, and might over time grow to like, excuse and even advocate for them, conservative religious leaders created the personas of clear-eyed moral arbiters. They postured themselves as the proverbial adults in the public sphere, dispassionately calling ethical balls and strikes. But under Trump they don’t even pretend to have a role in reigning in a deleterious president.

With Trump in charge, Conservatives now view ethics and morality as tradable goods which could be bartered, if looking the other way bought them what they desired. And repeatedly the president has called in his chips. Who would have imagined that Evangelical Christians, perennial champions of family togetherness, would now endorse the president’s family separation policy that keeps children as young as two years from their mothers? Or justify caging them in the name of preventing an alien invasion which only materializes during election seasons?

So, why is the Religious Right content to hitch its moral wagon to Trump’s sordid star? What are they gaining for their silence? The prevailing narrative is that Conservatives will stomach anything – profanity, child abuse at the border, misogyny, and most dangerous of all, rabid racism – in exchange for conservative Supreme Court justices who will give them a shot at overturning Roe vs Wade. That is, the potential of “restoring” the sanctity of life that most Evangelical Christians and Catholics claim was lost with Roe, overrides all other presidential vices – adultery, prostitution, discrimination, indecency, etc. Immoralities they have campaigned against in more sober times.

But I don’t believe a word of it. I think the sanctity-of-life argument is a self-serving, feel-good cover put out by Evangelical leadership because this idea, which makes them appear noble, also conjures in people’s minds principled advocacy for the vulnerable unborn. This clever ruse could have worked had the anti-abortion advocates been consistent and argued that all life is sacred. But they haven’t, choosing instead to define life and sanctity selectively. Ask the same people about their position on the death penalty and most will demure or come up with justifying reasons, complete with Biblical quotations, explaining why the death penalty is different. If the unborn is sacred life, why should born or actualized life be different? It is their unwillingness to apply the sanctity principle to all life that unmasks the true motivations of those who continue to give President Trump passes for his serial uncharitable and unchristian actions.

Their inconsistency doesn’t end with shifting definitions of sacred life. These same Conservatives, who will move heaven and earth to negate a woman’s anguished decision to terminate a fetus, also dive to the deepest oceans to eliminate funding for programs that help the very children they argued, pre-birth, deserve a chance at life. But when the children are born, they change allegiance and campaign to gut aid for mother and baby on grounds that mothers could get used to living on the “dole”.

So I’m not persuaded that, when Evangelicals and Conservatives bend over backwards to accommodate the president’s prejudices, and in the process expose their own hypocrisy, they are aiming to strike down Roe. I think the real reason is ideological, and in the thinking of most in Trump’s orbit – existential. With their penchant for preservation, religious conservatives are also traditionalists. Consequently they are troubled by the increasingly browning American demographic canvas. Conservative-leaning media outlets engage in fearmongering by casting the change, not as a healthy development to celebrate, but something sinister to be frightened of. Their recognition that Caucasians would, for the first time in the Union’s history, cease to be a majority, has stoked resentment and apprehension among rural Whites unsure of its implications.

It is partly this hovering angst that the president has tapped into and exploited with diabolical precision. And it is also partly for this reason that Conservatives/Evangelicals have stuck with him. So when the president told four sitting US congresswomen of color, three of whom were born in the United States, to go back to the countries they came from, the xenophobic undertone was not lost on the general American public. This unsheathed racist attack, designed to silence and cast these congresswomen as “other” – aliens who don’t belong – was greeted with the same indifference and silence by religious conservatives who have already turned a deaf ear to Trump’s racist tropes.

In his crude bombastic way, Trump has used his presidential megaphone to promote division and create a “we” versus “them” atmosphere in the country, stating in plain language the same racial prejudices Conservative Whites have for years privately countenanced as dog whistles.They did not expect anyone crass and “bold” enough to air this in public. Now, in Trump the varnish is off, and the chickens have come home. But, finding no higher ground to roost, they lie in their own droppings.

This could explain why, even though the president’s racist impulses seem to have lost all filters, prominent Evangelical leaders like Rev. Franklin Graham and Robert Jeffress continue to support him. Franklin, for example, claims “the president misspeaks sometimes, just like all of us.” In the past these same leaders, cloaked with what now appears to have been borrowed piety, insisted to all who would listen that there is a difference between right and wrong, a difference which under Trump appears to be a mirage.

The current outlook appears hopeless. But the future is at stake. Then the silent/complicit Conservative community might realize too late the true cost of their Faustian bargain. When another Pharaoh ascends the throne and behaves worse, Conservatives, who have squandered legitimacy could not object and expect to be taken seriously. Archbishop Fulton Sheen was right: “The refusal to take sides in great moral issues is itself a choice. It is a silent acquiescence to evil.” Conservative leaders have, through their loud silence, done more harm to the Union by enabling this president to normalize the great evil of racism, and will one day regret that they sold their moral birthrights for a mess of portage.

This essay has centered on the abdication of leadership by the national Conservative/Evangelical community to President Trump’s dangerous impulses. But they are not alone. In a future article, I will take up our own church leaders’ tepid or non-existent disavowal of Trump’s racism to discover if we are qualitatively different.