Why is the Bible, and not God, our First Core Belief?

Why is the Bible, and not God, our First Core Belief? 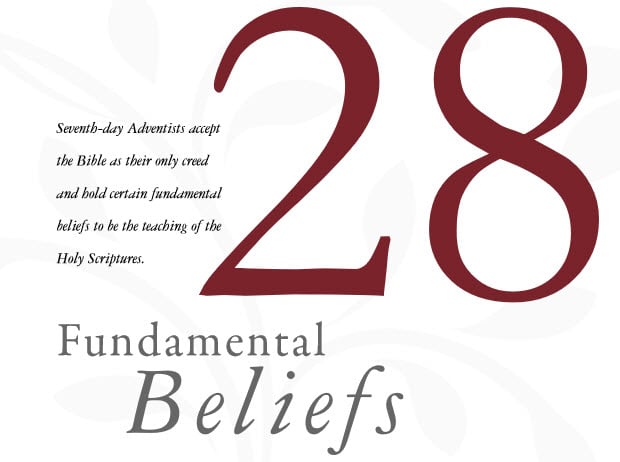 I’ve attested somewhere before that one of my most treasured Adventist “possessions” is my membership in the small Sabbath School (SS) class I attend at Andrews University. It is composed mainly of current and retired Andrews faculty, but that belies its clout and other perks of membership. For example, both primary writers of the previous and current quarter’s Adult SS Study Guide have visited and taught our class. In addition, we have an outstanding group of regular teachers who bring a varying wealth of Adventist backgrounds and general Christian experiences to each teaching assignment, making our weekly encounters delightfully enlightening.

Among our regular teachers is Dr. Harold Weiss, former Andrews seminary professor and current professor emeritus of Saint Mary’s College. In response to a question during his turn at our SS lectern early this quarter, he casually asked why the Bible, and not God, is our first Fundamental Belief (FB). That question surprised me because I had neither observed nor considered it before. While I had read these 28 statements many times in the past, I determined to carefully do so again. My aim was to discover what else I might have missed from previous readings.

The official introduction to the 28 FBs states that they are “organized into six categories – the doctrines of God, man, salvation, the church, the Christian life and last day events." This organizational framework, however, is difficult to discern on a first reading, which is all most readers do. Rather, what one infers readily is that those who assembled the original document might have envisioned a hierarchical structure based on presumed doctrinal rank.

A hint of this attempted ordering is especially noticeable in the first five statements concerning the Bible, Trinity, Father, Son and Holy Spirit. But the attempt appears to dead-end with the statement on the Holy Spirit. The arrangers probably began with the present five statements because they are the only group within the 28 that seem to share some organic relationship. Even here the bond between the Bible, on the one hand, and the four statements that follow it, is tenuous at best. The linkage is stronger between the Trinity and its manifestations, which might explain why the Trinity declaration was positioned ahead of its parts – Father, Son and Holy Spirit.

After my first unhurried reading, what impressed me particularly, albeit negatively, was the document’s length. Whether we blame my negative assessment on our contemporary much maligned short attention span, or on our elders' penchant to explain with a paragraph where a sentence could do, we still need to address the length “problem” if we desire an enhanced overall readership. Luckily, as I see it, this could be done adequately without sacrificing what we stand for. Since what is under discussion here is principally editing, the theologians and church administrators should beg off this assignment in favor of language teachers and editors who do this sort of thing for a living.

Clearly, these 28 faith proclamations do not have equal standing. Their importance is relative: while some bask in the sunlight, others are in the shadows. If we were compelled (no one would do so, but let’s pretend) to trim the 28 by half, some of our positions would easily make the cut, others not so easily. After all, inherent in a group’s desire to rank its belief set is an implicit recognition that the beliefs are valued variably.

So when we declare these 28 beliefs as our most distinctive, we don’t presume that this list is exhaustive, nor forever. They are important for us today, but another generation could see more immediate concerns from their experiences that might supplant some of what we have on our current list. In that case they might simply add to ours or jettison some to make room for theirs. There is precedent for this. Our beliefs have not always totaled 28. Historians point to an original informal four. Then in one fell swoop it grew to 22, and later to 27. For a while we stood at 27 until the experiences of fellow Adventists from other world fields suggested we should add another, on demonic powers, currently listed as number 11.

Thus we don’t hesitate to add, we only seem reluctant to subtract. If the world continues longer and we still engage in practices that experts warn are jeopardizing world viability, I can envisage later-generation Adventists decoupling the imperative in FB 21 to steward the earth and its resources from the presently-included tithing emphasis.

But we can’t continue adding to our list without creating an even more bewildering document that would struggle to serve its communication purpose. If the future church decides to trim our current list, they would have two options available. One is by delisting on theological grounds. A second is to shrink by ridding the list of repetition. If they tried to reduce the total to our hypothetical 14, which should be eliminated, and why?

The first belief I would offer for delisting is FB 19 (The law of God / The Ten Commandments). I contend that dropping this belief would not negatively impact our identity. On the contrary, by removing it, we gain clarity about Christ's saving grace. There was a time in our past when the Ten Commandments defined us. Then, we believed incorrectly, the commandments are salvific and we came close to projecting perfect law keeping, not Christ or Calvary, as our central focus. After the law debates of 1888, and later the 1957 publication of Questions on Doctrine, that view justifiably lost prominence. We shifted away from the law’s saving power, but we still equivocate and argue that obedience to the law is what proves that our salvation endures.

We now concede that the entire body of laws – moral and ceremonial – serves the metaphorical role of schoolmaster pointing us to Christ. If so, FB 9, which deals with the Life, Death, and Resurrection of Christ, should be enough to make Christ ascendant in every aspect of salvation. That is why, even though the Ten Commandments have always been in our theological arsenal, we could retire FB 19 without compromising our identity or salvation.

But whenever the Ten Commandments’ salvific role is questioned the perennial red herring – license to sin – is trotted out. “If the commandments are no longer required for salvation,” a friend once asked, “what’s the incentive to do good?” This is almost like arguing that we should do what’s right because a statute tells us to, and without that compulsion we lose our moral compass. But, if we never had the Ten Commandments, would humans be amoral? In other words, are the Ten Commandments what makes us do good?

We Adventists have always maintained that, when we become Christians, our lives come under Christ’s influence. And in the language of Ellen White, (Review & Herald, Aug 13, 1901) as we “behold him,” we become changed. His ethic becomes ours and we don’t go out of our way to misbehave. But we will misbehave even when we are Christians because, in our own strength, the good we strive to do constantly eludes us. Paul’s anguished lament, “Oh wretched man that I am! Who will deliver me out of this body of death?” bears witness to this state. Our focused attention to obeying the law, even when we convince ourselves we’re not doing so to gain salvation, is what burdens us. His promise to give us rest includes rest from linking our behaviors to salvation. “My yoke is easy,” he promises, “and my burden is light.”

This can’t be emphasized enough. From the Christian viewpoint, salvation is solely through Jesus, never through Jesus plus – i.e. a little obedience to the law. God first rescued the Israelites out of Egypt and only then gave them the law. Similarly, he first saves us, unconditionally, before anything else. Whatever form that “anything else” takes, it should never compete with Christ’s atoning death on Calvary. Nothing else we do or don’t do can add to or subtract from the Cross. This is the argument we attempt to make in FB 22, Christian Behavior. When we make this argument well, we don’t need the crutches of the law. We lose too much by hanging on to it.

Now to the second option: shrinking the 28 by eliminating redundancies. In this respect, we have an opportunity to kill three “proverbial birds” with one stone, by rephrasing the Trinity statement. We don’t need four separate statements to display our Trinitarian credentials. Fundamental Belief 2 begins: “There is one God: Father, Son and Holy Spirit, a unity of three coeternal Persons.” Our dependence on Augustine’s Trinity formulation is evident in this statement. So too is our adoption of the difficulty he created with his explication of the concept. After all, how does one explain how a unitary God is at the same time three separate Gods who have always existed; one being Father, the second, Son, and the third, unembodied genderless Being? Then three sentences into the exposition of the identity and composition of the Triune God, the term Trinity is genderized and morphed into a “He.” This is where we should accede to the counsel in the same passage that the Trinity “is beyond human comprehension,” then accept that we don’t adequately understand the godhead and say no more.

Since we designate the Trinity as a singular “He,” we complicate matters by separating them into three different Gods in FB 3, 4 and 5. If we insist on maintaining this differentiation, we could do this under a unifying heading, save space and maybe even achieve a little more clarity. With these two maneuvers, elimination of FB 19 and inclusion of FB 3, 4, and 5 as subsidiaries of FB 2, our beliefs could be whittled down by a seventh to 24. That still leaves us 10 more than our targeted 14, so we have our work cut out for us. Our task now is to determine which of the remaining 24 should form part of the 14 and which should be retired?

The foregoing discussion has been a long detour from a consideration of Dr Weiss' original question: “Why is the Bible, and not God, our first core belief?” This is a serious question which deserves an earnest answer. The answer revolves around two words: inerrancy and infallibility, words we seem to have fallen in love with for the wrong reasons. These words will be the subject of a future essay that seeks to discover why we prize the Bible above God.