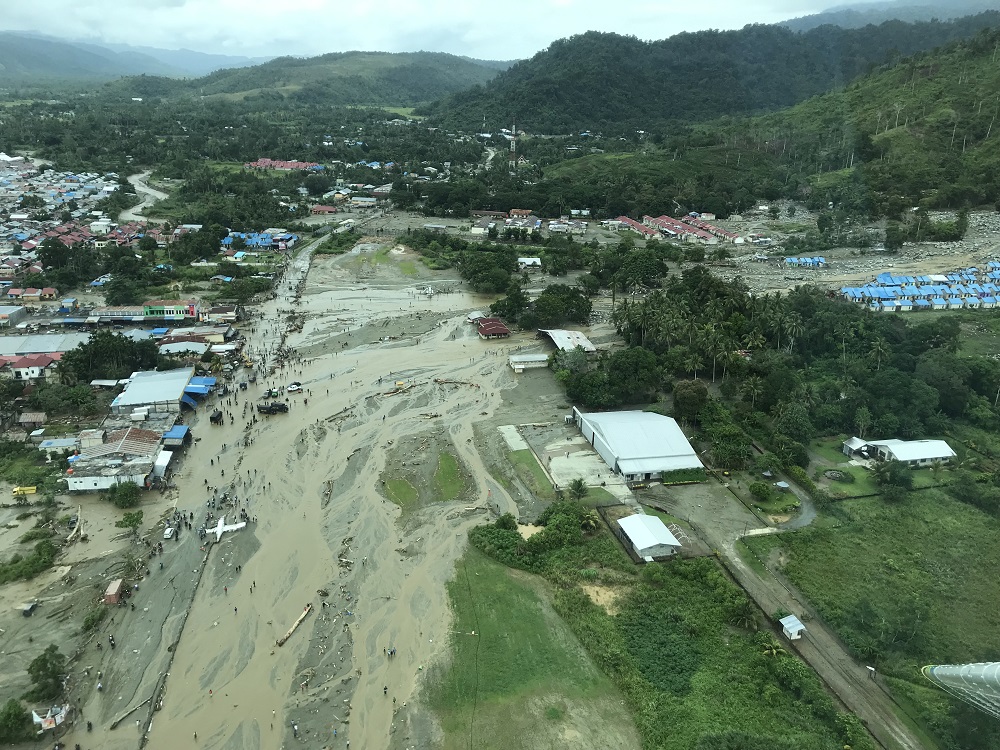 It’s Sunday morning, March 17, 2019, and as we taxi our mission plane up to the parking spot in Papua, Indonesia, Gary and I are oblivious as to what happened at home base last night. We have been spending the last few days overnighting in a mountain village with no reception. Now that we’re back to cell coverage, Gary takes a moment to catch up on his messages after we shut the engine down.

I wait for Gary to finish so I can ask how much fuel to pump, but he seems to be very absorbed. After a bit he turns to me and shows me his phone. Pictures of smashed cars on the Adventist Aviation Indonesia (AAI) campus. Another company’s airplane sitting next to the road, hundreds of meters from where it was parked. “There was a flood last night,” he says. I look at my phone and realize I have images coming through as well. I pull them up and see more incredible pictures: debris piled all over the place, vehicles nose-down and half-buried in mud, collapsed buildings. “Sounds like everyone’s ok, but Hendrik has a broken leg,” Gary says with a sigh.

The day’s schedule — and the rest of the week’s, for that matter — is out the window; it’s time to return immediately to Sentani. We take on as much fuel as possible and take off under the gray overcast sky. Apart from the grim pictures, we have no idea what we’ll find upon returning. Our airbase runway is definitely gone, so we will have to land at the commercial airport.

As we arrive over the Doyo Baru area, a strange sight comes into view. The perimeter by the main road is gone and scores of people are dotting the surface of a gray expanse that used to be our grass runway. On the edge of the road is the other company’s plane that has been washed clear out of our second, older hangar. The hangar itself is half collapsed. We can see how a huge river has just poured through the middle of campus, sweeping a path of destruction and completely changing the landscape. Above the campus and far up the mountainside, gray landslide paths scar the Cyclops Mountains. The only words I can think of are, What a mess…

We land at Sentani and manage to get a ride to Doyo Baru. As we step foot onto the property the real picture starts to sink in. Somehow the photos don’t quite have the same effect as actually standing there in person. If anything, the reality is worse. 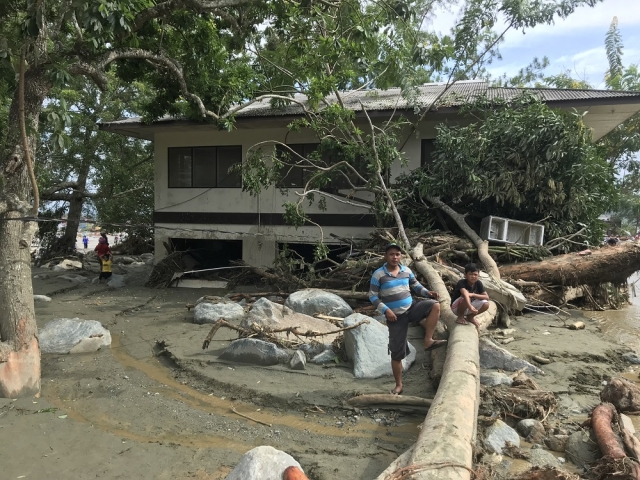 The mud and sand has half-buried the first floor of this house.

I begin slowly walking across campus but I have a hard time recognizing exactly where I am. The place has been transformed from a lush jungle compound to a sandy riverbed. Trees and undergrowth are gone and in their place are large boulders. I don’t remember those being here, I think before realizing with alarm that the flash flood carried these huge pieces of rock along as if they were marbles.

Houses are gone and other buildings are smashed up and partly buried in silt, tree trunks and roots. My house is still standing, but as I reach for the door, I brace myself for a mess inside. As I open it, I almost can’t believe my eyes. It’s spotless. All around are destroyed homes and my house has not one trace of misplaced moisture inside.

I visit our remaining hangar. Dank air greets me as I poke my head inside the gloomy dark place. The entire floor is caked with a few inches of gooey muck. This building is the strongest on campus and the staff families took refuge on the second floor last night when the flash flood was happening.

I listen to harrowing accounts of that night. (Read Ruth Boyd's story here). Intense rain, a constant low rumble that sounded like thunder but just kept on going, a strong earthy smell, everyone fleeing their houses as water started rising, people crowding around outside the hangar and trying to find a way to get inside the locked building, the onslaught of water and debris breaching a side door after everyone had managed to get inside, water flowing through the bottom of the hangar while the families waited in darkness on the second floor, and outside, beyond the campus property, cries for help all night long. It must have been awful. 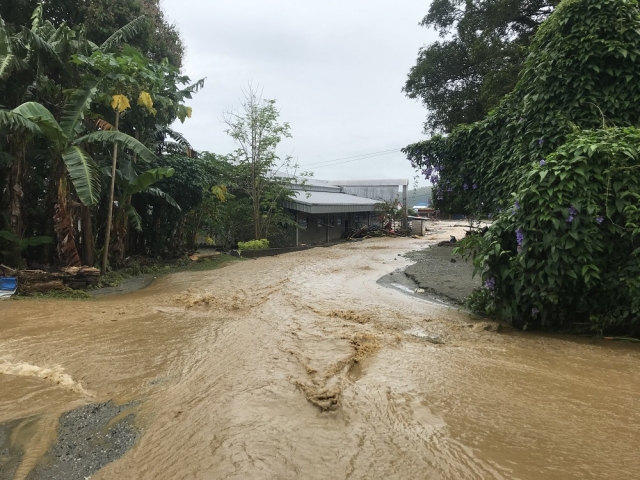 One of the rivers flowing through campus and threatening the hangar.

Right now things seem relatively stable. But as darkness arrives, so does an eerie, foreboding feeling. There’s no electricity on campus; just flashlights. And there’s the nagging question as to whether it will all happen again tonight.

I feel very uneasy as I return home and try to fall asleep. My house was safe last night, but what about tonight? I eventually manage to doze off.

Until I hear it. Light rain sprinkling outside. I’m instantly awake, paralyzed with nervousness, willing the pitter-patter to stop. It seems to slow down; I wait. And then it starts raining harder. And still harder.

I get up, grab my stuff, and join my housemate and neighbor in making our way across campus to the hangar. There are already shallow streams flowing all over campus. Everyone from the campus makes it in; many families have never moved out in the first place.

The rain is roaring on the metal roof now. With one generator-powered light dimly illuminating the hangar, most of the guys stand near the entrance restlessly watching while families on the second floor do their best to sleep. We periodically shine flashlights outside to see if the water levels are rising dangerously. So far it’s still okay, but there doesn’t seem to be any letting up of the downpour.

I glance at my watch — it’s past 2:00 a.m. I decide to go upstairs and try to sleep. Finding a spare mattress, I flop down and lie there in the semidarkness, too wound up to sleep and too tired to do anything else. I eventually drift into a fitful sleep as the rain continues to pound and hound me.

Over the next couple hours the rain slows. And finally stops. Someone shuts off the generator and everything becomes peacefully quiet. I sit up and squint through my sleepy eyelids. A faint gray light is spilling through the hangar door opening. It’s finally morning. I have never felt so relieved for dawn to come. We’re still safe.

The next few days are a blur. Growing rivers flowing through campus, water levels rising. Endless hours of shoveling out the hangar, and then trying to squeegee water off the floor during the night as heavy rains start to undo our work. Getting poor sleep while thunderstorms crash away outside. Wearing wet shoes and socks all day long. Hearing the sad news that Hendrik, our one staff member who had been injured in the flood, had passed away due to complications from his injury. Gary’s house nearly getting flooded before an excavator team diverts the water flow from upstream just in the nick of time. Celebrating my birthday by taking the time to video call my family for the first time since the flood happened. Electricity and running water slowly being restored in the remaining buildings. And things slowly starting to dry out. 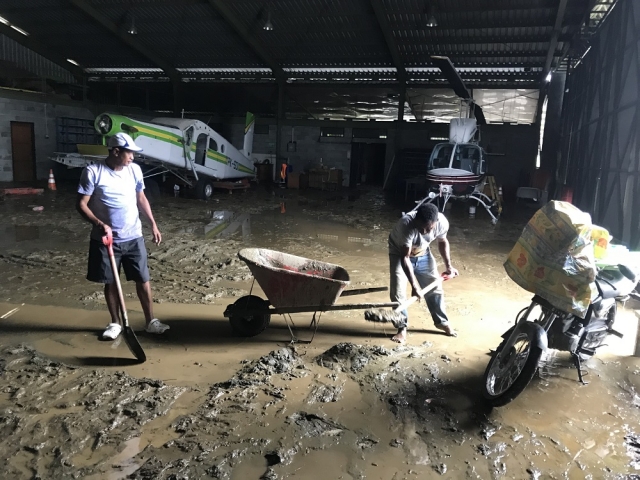 One in hundreds of man-hours of cleanup work.

Each day I leave the cleanup work for a bit to check up on my house. For a few stolen moments I stay in this familiar place, snacking on some of the food that’s still in the cupboards or just sitting and reading my Bible. One passage that I read slowly and more thoughtfully than ever before is Psalm 46:

God is our refuge and strength,
A very present help in trouble.
Therefore we will not fear,
Even though the earth be removed,
And though the mountains be carried into the midst of the sea;

Though its waters roar and be troubled,
Though the mountains shake with its swelling. Selah

Familiar words, but in real context now. Words to repeat at night when you can hardly hear yourself think because of the noise of the rain thundering on the corrugated roof. And then a beautiful picture in the next phrase:

There is a river whose streams shall make glad the city of God,
The holy place of the tabernacle of the Most High.

God is in the midst of her, she shall not be moved;
God shall help her, just at the break of dawn.

In place of the terrible destructive watery deluge is this scene of a river that brings healing and peace. So different from the fearful, forceful flood that has swept away so much; instead, this is the river of life flowing from the very throne of God.

Then it’s back to the hangar to continue shoveling mud into wheelbarrows.

Over the next couple months, things gradually return to normal. Granted, it’s a new normal as the campus is still in shambles. Locals have said this is the worst flooding that has ever happened. Over a hundred residents lost their lives and many are still missing. AAI alone sustained an estimated $5 million dollars in infrastructure damage.

Yet despite the tremendous losses, the mission plane was in the right place at the right time and wasn’t damaged by the flood or marooned in the hangar without a runway to take off from. PK-TCA has since been able to resume a busy flight schedule, operating out of the Sentani Airport. AAI continues to serve the interior of Papua, Indonesia. And as long as God keeps the program afloat, that’s what we’ll keep on doing. 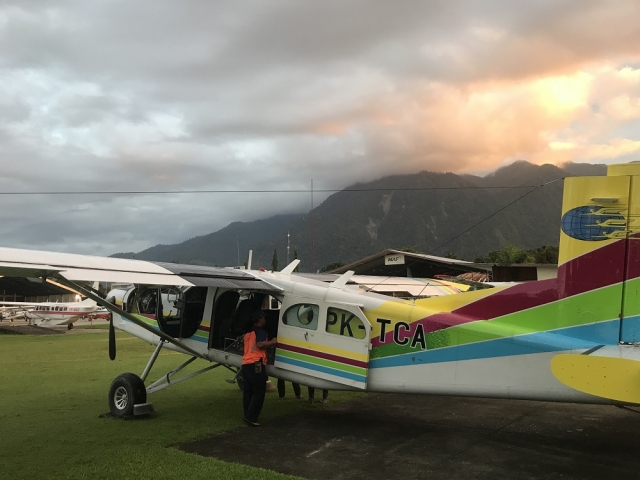 Parked at Sentani Airport after a full day's flying.

Michael Lombart is a mission pilot in training with Adventist Aviation Indonesia, one of two remaining church-sponsored aviation programs. An MK (Missionary Kid) who was born in the Middle East, Michael has returned overseas after graduating with a degree in Religion and working as a flight instructor. Michael keeps a blog at www.flyairmike.blogspot.com.

Main image: The flooded area used to be the grass runway. All photos by the author.