Too Much but Not Enough

Too Much but Not Enough 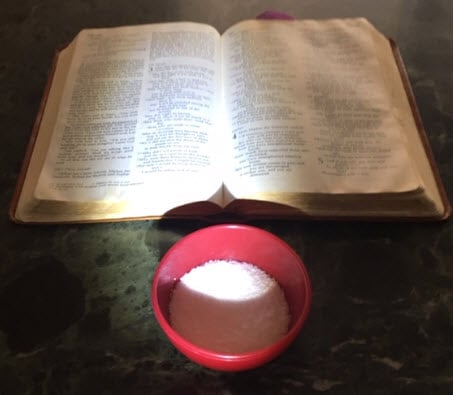 With everything going on around us, I have been thinking about the Christian’s role as influence and witness in and to the world. When I think of this issue I am reminded of Jesus’ words in the Sermon on the Mount: “You are the salt of the earth; but if the salt has become tasteless, how can it be made salty again? It is no longer good for anything, except to be thrown out and trampled under foot by men. You are the light of the world. A city set on a hill cannot be hidden; nor does anyone light a lamp and put it under a basket, but on the lampstand, and it gives light to all who are in the house. Let your light shine before men in such a way that they may see your good works, and glorify your Father who is in heaven.” These four verses give us two major parallels to describe our influence in the world, and by connection, how we share the gospel. Interestingly enough, these two parallels show us the positive and negative ways we can influence the world as well.

Jesus uses salt and light as an object lesson for how Christians should relate to the world around them. In reference to salt, Jesus stresses that when salt loses its flavor it is of no use to anyone. How does this apply to the Christian life? I believe that Jesus is calling us to make sure that we replenish ourselves with a fresh and new understanding of who Jesus is and what He requires of us. God is infinite and as such we can never say that we know all that we need to know of Him. When we become comfortable with our finite knowledge we then run the risk of losing our saltiness. I think Ellen G. White is a great example of this principle. Her vision of Christ and her understanding of Him changed as she got older. One of my favorite quotes from her is: “We should not allow a day to pass without gaining an increase in knowledge in temporal and spiritual things. We are to plant no stakes that we are not willing to take up and plant farther on, nearer the heights we hope to ascend.”[1] White understood that the only way to prevent stagnation was to keep growing, to keep learning, to keep moving forward.

With light, the significant principle to understand is that our light cannot be hidden. This object lesson comes as close as possible to giving an explicit command to make sure that our influence is active and not passive. As Christians we should be making a concerted effort to live lives that reflect the light that is within us. Once again White counsels, “Every follower of Jesus has a work to do as a missionary for Christ in the family, in the neighborhood, in the town or city where he lives. All who are consecrated to God are channels of light. God makes them instruments of righteousness to communicate to others the light of truth, the riches of His grace.”[2]  Like salt without saltiness, light is of no use to anyone if it is hidden. Of even greater importance is the fact that when a light is not hidden, it is of benefit to everyone, even those who did not specifically ask for the light. Regardless of whether we can trace the benefit of our influence or witness, it is still our responsibility to share what we have with the world around us.

While both salt and light have positive elements that Jesus stresses, it is just as important for us to note that salt and light also have negative effects as well. It is a well-established fact that too much salt in one’s diet has negative health effects, ranging from high blood pressure to stroke, heart failure, and kidney disease. Similarly, salt is a bad thing for any particular environment. When we talk about salting the earth, we’re talking about putting so much salt in a place that nothing will grow there. We have to be careful with how much salt we share with the world as well. We might end up having a negative effect on people’s spiritual health. We might share so much salt that we actually choke the Spirit’s ability to grow in the human heart. Christians in their zealousness can become overbearing, heavy handed, or resort to methods that are oppressive as opposed to expressive. When we come on too strong, or too insistent, we can cause as much damage as if we were salt without savor.

The same is true with light. Jesus implicitly recognizes this when He counsels His listeners to “Let your light shine before men in such a way that they may see your good works, and glorify your Father who is in Heaven.” I don’t think we consider enough the idea that sometimes our light can be too bright. When a light gets too bright, there comes a point when you see only the light and nothing else. At that point the light becomes useless. The phrase “in such a way” implies that you can shine your light in a way that is negative as opposed to positive. Jesus shows us how that can happen when He implores us to shine our light in a way that allows God to be glorified. We can sometimes use our gifts in such a way that we draw attention to ourselves and not to the God who gave us the blessings.

And so, as with many other things in the Christian walk, it is important for us to find a sense of balance. We can’t be too salty, but we also have to avoid not being salty enough. We must shine our light, but not too much. When I look at the broad swath of Christianity, I fear that we are so afraid of being not enough that we err on the side of being too much. Unfortunately when we do that we cause as much damage as if we had done nothing at all.