Principles of Proceedings, Compliance, and Conscience 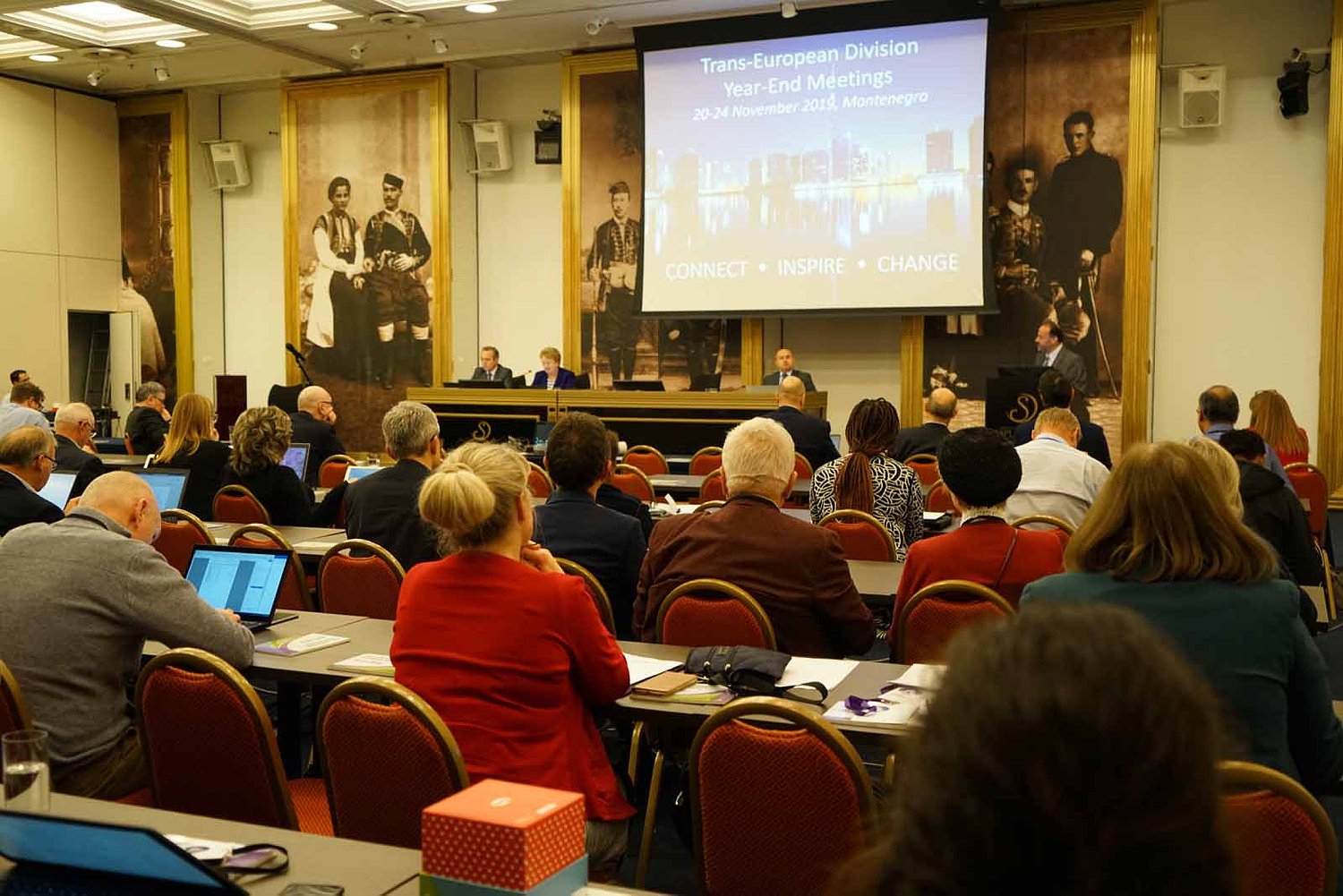 The Executive Committee of the Trans-European Division met for its 2019 Year-end Meeting (TEDYEM) November 21 to 24, 2019. The business from the General Conference Annual Council (GCAC) in October was as usual an important part of the agenda. The warnings voted for the three Scandinavian unions, among other unions, were naturally part of the agenda. The TEDYEM was not streamed, and I have received many questions on what took place in the meetings concerning the warnings voted at GCAC. There is a brief report from TED concerning this item. Additionally, I find it appropriate to give a glimpse of this particular matter, from my perspective.

In my role as Executive Secretary of the Norwegian Union, credentials and employment of pastors are important parts of my task. That was an additional reason for watching the live stream of the GCAC on October 15 when the warnings of the German and the Scandinavian unions were dealt with.

Article by Elder Ted Wilson in the Executive Committee Newsletter

Just prior to the 2019 GCAC, an article by Elder Ted Wilson appeared in the October 2019 issue of the Executive Committee Newsletter (ECN) published by the GC. In the article titled “A Theology of Leadership” Elder Wilson wrote, “we build our theology of leadership and practice firmly upon the Bible.”

He refers to two highly relevant texts: Exodus 18 and Acts 15.

In these texts the following principles of practice stand out:

As the GC administration dealt with the matter of warning six unions in 2019, none of these four mentioned biblical principles were applied.

The online BusinessDictionary gives the following definition of “principles”:

“Fundamental norms, rules, or values that represent what is desirable and positive for a person, group, organization, or community, and help it in determining the rightfulness or wrongfulness of its actions. Principles are more basic than policy and objectives, and are meant to govern both.”

Looking for principles of proceedings for the church, the document voted by the 2018 GCAC is highly relevant as well. There was no “dialogue” nor a “clearly written statement defining the perceived non-compliance” (requirements from the 2018 document) as the GC administration took over this issue in 2019. Due process is another source of vital principles which is also referred to in the 2018 document. On October 15, as the GCAC dealt with the issue of warning some unions, Elder Lowell Cooper in his comment pointed out that due process was not applied.

A study of the 2018 document and due process, in addition to the biblical references mentioned, made me present the following conclusions to the TEDYEM concerning missing principles in the proceedings that were followed, as the GC administration took over this issue in 2019:

1) There is no biblical basis mentioned in dealing with the warnings of the unions, in spite of this being a basic principle (Exodus 18 and Acts 15).

2) The GC administration took this case out of the hands of the Divisions, in spite of the biblical principle of dealing with issues locally at first (Exodus 18 and Acts 15).

3) The Unions involved were not given any opportunity to defend themselves before the GC Administrative Committee (ADCOM) where the verdict was voted, in spite of principles from the Bible, the 2018 GC document, and Due Process.

4) The process in GC ADCOM was a totally closed process in spite of principles from the Bible and Due Process.

5) The GC administration did not invite the unions for any dialogue in 2019, in spite of principles from the Bible, the 2018 GC document, and Due Process.

6) There was no clearly written statement defining the perceived non-compliance, in spite of principles from the 2018 GC document.

7) No proper notice was given, in spite of principles of Due Process.

8) GC ADCOM is definitely not an independent and impartial tribunal, in spite of principles of Due Process.

9) There was no possibility for an appeal to a superior body or to a special appeal body, in spite of principles of Due Process.

10) The basis of the warnings of the German and the Scandinavian unions are based upon policy, in spite of the fact that policy contains provisions for alternative solutions.

One person present at the meetings told me afterwards that in his opinion Ted Wilson did not give any answer concerning these ten points presented to the TEDYEM.

The church has no system for setting aside verdicts of proceedings that do not follow due practice. In my country, lack of following due process results in annulling a verdict.

I am sad to say that the process we see points in the direction that there is an agenda that is governing, rather than a respect for biblical and other vital procedural principles. In his almost 50 minutes of comments to the TEDYEM, Elder Wilson particularly pointed out the importance of accepting the vote in San Antonio. The GC Session is the highest authority on earth, he reminded the TED Executive Committee.

Elder Wilson made it clear that belonging to an organization means you cannot set aside a voted decision on the basis that you “do not like it.” Forty percent of the delegates in San Antonio voted yes, and probably will say that they “do not like” the decision. But we are faced with something much more serious than what we like or do not like. First of all, we are faced with biblical principles and the work of the Holy Spirit, among other vital elements. (See my September 7, 2017 article on the Spectrum website.)

I reminded the 2019 TEDYEM of the following Pauline texts concerning Spiritual gifts:

18 …God has placed the parts in the body, every one of them, just as he wanted them to be.…

27 …you are the body of Christ, and each one of you is a part of it. 28 And God has placed in the church first of all apostles, second prophets, third teachers, then miracles, then gifts of healing, of helping, of guidance, and of different kinds of tongues.

5 …in Christ we… form one body, and each member belongs to all the others. 6 We have different gifts, according to the grace given to each of us. If your gift is prophesying, then prophesy in accordance with your faith; 7… if it is teaching, then teach; 8 … if it is to lead, do it diligently...

11 ...Christ himself gave the apostles, the prophets, the evangelists, the pastors and teachers, 12 to equip his people for works of service, so that the body of Christ may be built up

16 From him [Christ] the whole body, joined and held together by every supporting ligament, grows and builds itself up in love, as each part does its work.

Who am I to say that women cannot be fully accepted as a pastor as well as men when this is dependent upon the gifts from God? In his lists of Spiritual gifts, Paul does not mention even once that there are certain gifts that are reserved for men only.

In Scandinavia the church is totally dependent upon employing female pastors, as there are not enough men who are willing, or possibly do not feel that they have the gift of pastoring. This is a matter of being able to do the mission that is the task given to the church, plus the credibility of the church in our context.

In the Adventist Church we have had female pastors for decades. Elder Neal Wilson said this at the 1990 GC Session concerning female pastors in the US:

I belong to a church that has a long history of defending the right to freedom of conscience. In guiding me in the current issue, the following elements are vital:

a) The biblical principle of non-discrimination

• “If you really keep the royal law found in Scripture, ‘Love your neighbor as yourself,’ you are doing right. But if you show favoritism, you sin and are convicted by the law as lawbreakers.” (James 2:8-9)

• #14 “…differences between high and low, rich and poor, male and female, must not be divisive among us.”

• #17 “God bestows upon all members… spiritual gifts… the Holy Spirit… apportions to each member as He wills, the gifts provide all abilities and ministries needed by the church… Some members are called of God and endowed by the Spirit for functions recognized by the church in pastoral, evangelistic, and teaching ministries…” (We find no mention of gender here!)

As a church we have struggled with the issue of non-discrimination of women, and still do. Equal pay is one example. Still there are women doing the same job as men within the church, and receiving less pay. In the Merikay Silver case in the 1970s, the church was forced to respect the 1964 Civil Rights Act. While attorney Malcom T. Dungans was involved in this case on behalf of the church, the case was argued as a matter of religious liberty. The same argument is still used concerning the discrimination of female pastors concerning ordination. Is the church ready to meet a female pastor who asks for the equal employment opportunity (EEO) complaint process, believing that the actions of the church are discriminatory?

Ellen White’s statement in Acts of the Apostles p. 68:

“‘…In matters of conscience the majority has no power’… This principle we in our day are firmly to maintain.… God’s word must be recognized as above all human legislation. A ‘Thus saith the Lord’ is not to be set aside for a ‘Thus saith the church.’”

Martin Luther’s statement as he appeared at the Imperial Diet at Worms:

"Unless I am convinced by Scripture and plain reason — I do not accept the authority of the popes and councils, for they have contradicted each other — my conscience is captive to the Word of God. I cannot and I will not recant anything for to go against conscience is neither right nor safe. God help me. Amen."

All scriptural references above are from NIV, emphasis added.

Finn F. Eckhoff is Executive Secretary of the Norwegian Union.