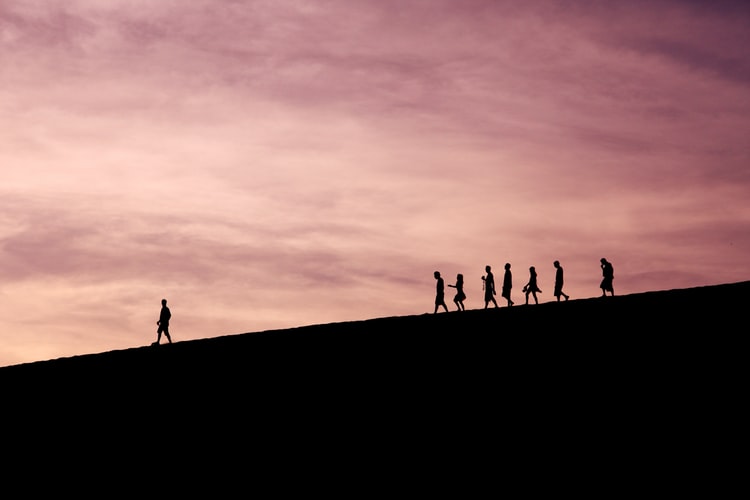 I recently saw a cute video of a group of calves crossing the road. On their short trek from one field to another, they went across the street. When the first calf encountered the painted dividing line, it leapt over it. All the other calfs followed suit making for a sweet video of baby cows playing follow the leader. Humans aren’t much different though. A social experiment carried out a few years ago demonstrated that a group of strangers in the street would be willing to do inexplicably odd things for no reason other than the fact that others were doing it. Monkey see, monkey do.

Sometimes this tendency has far more harmful ramifications. Many have likely heard about the racist wedding venue owner that wouldn’t let an interracial couple use her establishment. She turned the couple away citing her “Christian belief”. The groom’s sister returned some time later confronting the owner and made a video recording of the encounter. The owner stood firmly by her convictions, staunchly insisting that her objections were religiously based. When the videographer challenged her to defend her stance from the Bible, the owner replied that she wasn’t interested in debating her faith. The video of the encounter went viral. The owner subsequently shut down all of the venue’s social media accounts following public backlash. But before deactivating their Facebook account, she posted an excuse for her discrimination. In her post, she admitted her had been wrong but been led to believe that an unbiblical discriminatory practice was actually based in the Word. She admitted that no one explicitly taught her this. Yet she was influenced by the behaviors of those around her and unquestioningly accepted it as literal Gospel truth. It wasn’t until this incident that it had ever occurred to her to search the Scriptures herself. And to her surprise her beliefs were unfounded by the Bible. She had been engaged in a lifelong game of monkey see, monkey do.

I have mixed reactions about her “apology” post. On the one hand, everyone is sorry after they get caught and called out. I find it interesting that she never thought to check her beliefs before turning this couple away. And even afterward she still didn’t check her stance against the Bible and adamantly made a declaration to the groom’s sister (who came up later and made the video) that it was “based on her faith”. And yet again, she didn’t even check her stance after the sister asked her where the Bible said that. The owner had ample opportunity to test her assumptions. But it never become important until the story went viral. Then all of a sudden she has time for a Bible study!

On the other hand, I can (unfortunately) believe her account, given the lack of Bible literacy that abounds today. This woman is of an undisclosed evangelical background. But she isn’t Adventist. And with our reputation as “People of the Book”, it’s easy to lull ourselves into the false belief that we would never make such an egregious error. But Adventists play monkey see monkey do all the time too.

Despite Sabbath School Quarterlies and Daniel/Revelation seminars, our constituents aren’t as well versed in the Bible as we would love to believe. Many Adventists will vehemently argue that jewelry is prohibited in the Bible, ignoring the abundant amount of texts where jewelry is shown as a part of adornment for godly celebration. Many hang their disdain on the caution that women’s beauty ought not only come from outward appearance – taking this to be an outright ban rather than a call to prudence.

We have Adventists – even preachers – declare that God’s pronouncement of having cattle on a thousand hills (Psalm 50:10) is a text about blessing the Children of God. That’s not the context at all! We glean our ideas about theology and Christianity from songs, friends, and popular preachers. Unlike the Bereans (Act 17:11), few search the Scriptures for themselves to ensure the veracity of claims made.

My point is not to advocate for jewelry or suggest that God isn’t a Provider. These are just examples. I simply want to encourage us to be more willing to challenge our long-held assumptions. We rest on the laurels of our collective denominational scholastic reputation. But Adventists are just as prone to Biblical error as other Christians. Besides arrogance in our theological superiority, we also hesitate to do a deep dive into our tenets because there is often a fear that delving into our beliefs will lead to a crisis of faith. If the things we’re standing on are so shaky that they can’t stand up to scrutiny, then they aren’t the truth anyway! Truth remains constant and firm even under examination. Instead of being wary of testing our beliefs against the Word, we should welcome it! After all, we profess to be followers of Christ. Let’s stop merely following those around us. Instead of resting on the certainty that we have The Truth as the Remnant, lets continue to always search for Truth in the Word, even if it means breaking away from the herd.