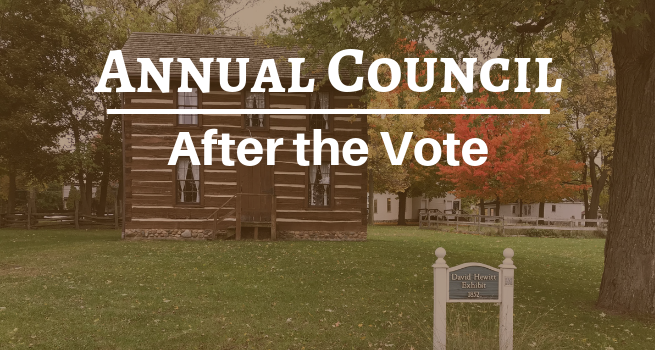 Sunday afternoon, delegates to the 2018 Annual Council cast their votes on the proposal to discipline “non-compliant” units of the Seventh-day Adventist Church.

Despite all the words in the proposal and speeches on the floor, the real target was the ordination of women ministers, with the Pacific Union and Columbia Union in the crosshairs for punitive action. The General Conference was and remains determined to bring these two unions to heel.

Look at the trajectory of the past three Annual Councils:

2016: The GC introduced a proposal focused on punishing non-compliant unions. It failed to get a majority vote.

2017: A modified, more stringent proposal along the same lines was brought to the floor. It likewise failed.

2018: The latest proposal came packaged with a large, complicated procedure, supported by survey data of a dubious nature. But the original intent to force the Pacific and Columbia Unions to submit, although obscured in a fog of words, remained. The proposal passed handily.

I am disappointed but not surprised — and certainly not discouraged. Here’s why.

Disappointed because I believe strongly that what was voted marks a radical departure from the Adventism of Ellen White and the founders of our movement, from our Protestant heritage, and from the life and teachings of Jesus. It will ultimately shatter the unity of the SDA church — ironically, in the name of unity.

Not surprised because the decision to bring the proposal to the floor virtually guaranteed the vote.

During the week preceding the Annual Council, Division and General Conference Officers (GCDO), as they customarily do, met to consider agenda items. This meeting of the top leadership of the global church functions in important ways like the U.S. Senate, where accumulated wisdom and careful deliberation are meant to be the hallmark.

When GCDO met and voted, these leaders split down the middle on the non-compliance proposal. The margin in favor of going forward was razor thin.

The proposal should have died right there — it should have been withdrawn. We are a church not a political organization that acts on the slimmest of majorities.

The GC leadership forged ahead anyway. Did they figure that, although the “Senate” was split down the middle, the “House” (the much larger GC Committee) could be counted on to deliver the vote?

The composition of the GC Committee has undergone a sharp transformation. It has become weighted toward the global South over against the North. This is because each new union voted in at a GC Session gets a seat on the GC Committee. And the new unions nowadays come overwhelmingly from the developing world.

The outcome in Battle Creek was entirely predictable.

But not discouraged. How could I be when the head of the Church isn’t someone in Silver Spring? Jesus is Head of the Church, and He will bring a good result in spite of the present disappointment.

How can I be so confident? You can’t hold back the dawn. History is on the side of justice and equality.

I stand with them.

“The stream of Adventism is fed by the teardrops of the Great Disappointment,” writes Alex Bryan in “Primal Adventism: Jesus at the Beginning” (For the One: Voices from the One Project, a sermon originally preached at the One Project).

Bryan is correct: disappointment is in our DNA.

Out of the disappointment of October 22, 1844, arose our church, which, in spite of all its flaws, is still a wonderful family to belong to.

And out of the disappointment of October 14, 2018, will arise the new, just Adventism of the Lord’s devising.

William G. Johnsson is the retired Editor of Adventist Review and Adventist World magazines, and the author of numerous books including Where Are We Headed? Adventism after San Antonio (2017) and Authentic Adventism (2018). This essay originally appeared on Living God's Love, a blog by the Pacific Union Conference. It is reprinted here with permission.