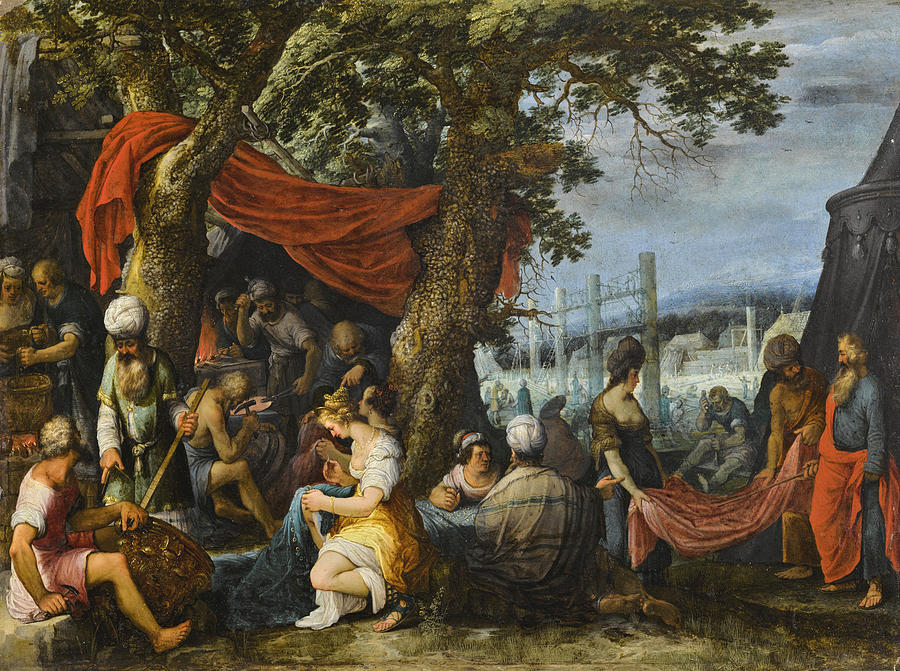 Sabbath school commentary to read alongside the Adult Bible Study Guide for February 19–25, 2022. Editor’s note: this commentary on Hebrews 9 was originally published by Spectrum in 2003.

Since the time of my youth, the letter to the Hebrews has been of special interest to me. Brought up as an Adventist and son of a pastor who for years wrestled with the sanctuary doctrine, I had numerous opportunities to discuss with my father in a spirited manner the Church’s teaching about the heavenly sanctuary. In addition to Daniel 8, it was particularly Hebrews 9 that caught my attention. This chapter seemed to hold the key to a proper understanding of the biblical sanctuary truth.

When I went to Andrews University for graduate studies, I immediately began to investigate in depth this debated Adventist teaching. In fact, my first term paper was entitled "The sanctuary as a parable in Hebrews." It was an exegetical study of Hebrews 9:1-14 and—thanks to the generosity of Ivan Blazen—even written in my mother tongue.1 This week’s lesson study focuses on this very issue: What is the exegetical, doctrinal, and practical meaning of the Israelite sanctuary for (Adventist) Christians today?

In summary: The letter to the Hebrews seeks to demonstrate the superiority of Christ and his ministry to the Jewish religious system and its priesthood. After having shown that Christ surpasses even the angels (chs. 1-2), Moses (chs. 3-4), and the Levitical priesthood (chs. 5-7), the author argues that Jesus also offers a better covenant (ch. 8) and a better sanctuary ministry (chs. 9-10). This has practical implications for the life of Christians who follow Christ into the sanctuary, that is, into the very presence of God (chs. 11-13). In this overall context and purpose, Hebrews 9 is of particular relevance for grasping the true meaning of the sanctuary language of Hebrews.

Seventh-day Adventists tend to read these chapters in the light of their own sanctuary doctrine, which grew out of the experience of 1844 and cannot properly be understood or appreciated without it. Because of this, they find it difficult to follow the thought of the author himself, whose statements partly seem to conflict with the Adventist view. The problem—as well as the solution—lies in chapter 9, particularly verses 1-14. Here is found the deeper, theological meaning of the Israelite sanctuary as understood in the light of the New Covenant ministry of Christ. To grasp it is to understand the author; to miss it means to misread the chapter and confuse the underlying issues. Thus, it is of crucial importance to understand the letter’s sanctuary talk.

Chapter 9 verses 1-7 describe the structure and function of the Israelite sanctuary. Its special characteristic was its two-partite nature and the twofold ministry performed in it. The terms daily and yearly aptly summarize this crucial distinction. The continual ministry in the first room of the tabernacle (Hagia) was followed and superseded by the once-per-year ministry in the second part (Hagia Hagion ). Both apartments were separated by a curtain (called, in 9:3, "the second curtain" in distinction to the first one at the entrance of the building).

What follows is the most important sentence of the entire chapter (9:8-10). Here the author explains the deeper meaning of the two-partite structure and ministry of the Old Covenant sanctuary. "The Holy Spirit was showing by this that the way into the Most Holy Place [ta hagia] had not yet been disclosed as long as the first tabernacle was still standing. This is an illustration for the present time" (NIV). In other words: the purpose of the two-partite Israelite sanctuary and its corresponding ministry was to teach the theological truth about the inferiority and superiority, respectively, of the Old and New Covenant systems and sanctuaries.

According to the author, the relationship of the daily to the yearly ministry is a prophetic type of the relationship between the Old Covenant (sanctuary) and the New Covenant (sanctuary). Just as the daily ministry in the Israelite cultus had to give way to the once-per-year ministry on the day of atonement, so the old covenant cultus in its entirety (including its earthly sanctuary, Levitical priesthood, and rites of worship) was superseded by the once-for-all ministry of Christ within the New Covenant (including its heavenly sanctuary, Melchizedekian priesthood, and high priestly mediation).

The proper understanding of this passage hinges, in part, on the meaning of the term ta hagia, which has given rise to a controversy among Bible scholars. The term occurs ten times in Hebrews and is always used in its plural form (with the exception of 9:1-3, where the singular is employed). Several verses identify ta hagia with the heavenly sanctuary (8:2; 9:11-24; 10:19), whereas others denote by it the most holy place in the Israelite tabernacle (9:25; 13:11).

The apparent contradiction disappears as soon as one understands the author’s true intent: What the most holy place was to the Old Covenant system, the heavenly sanctuary is to the plan of salvation as a whole. In other words, the two apartments of the Israelite temple and their respective, successive ministries represent the development from the Old to the New Covenant, from Moses to Christ, from Aaron to Melchizedek, from the earthly to the heavenly Jerusalem. Just as the opening of the curtain between the two rooms signaled the day-of-atonement ministry of the Levitical high priest, so the death of Christ on Calvary brought about the once-for-all atoning ministry of the New Covenant taking place in heaven itself (see 6:19ff and 10:19ff; cf. Matt. 27:51).

All interpreters of Hebrews agree that the Israelite sanctuary was a theological type, that is, a pictorial representation of the spiritual truth that the author of Hebrews wanted to convey to his readers. They disagree, however, on which truth actually is represented by the type. On the basis of Hebrews 8:5 and 9:22ff, Adventist interpreters have argued that the two-partite earthly temple is a type of a two-partite heavenly sanctuary, the second apartment of which was entered by Christ on the antitypical day of atonement in 1844.

However, it is to be noted that nowhere in the book does the author show any interest in, or concern for, a spatial or functional partition within the heavenly sanctuary. Rather his attention is focused primarily on the relationship between the two covenants and the superiority of the "new" over the "old." It is in this context and for this reason that the author argues "that the way into the Most Holy Place [the heavenly sanctuary] had not yet been disclosed as long as the first tabernacle [the earthly sanctuary] was still standing [or functioning]. This [desert tent] is an illustration for the present [Old Covenant] time," which has been superseded by "the time of a new [covenant] order" (9:8-10 NIV).

The sanctuary doctrine of the book of Hebrews can therefore be summarized like this: The superiority of Christ over against Moses and the Levitical priesthood is related to the better, heavenly sanctuary where Christ ministers on our behalf. Having shed his blood on Calvary (represented by the opening or rending, respectively, of the second curtain in the Israelite tabernacle) and having returned at his ascension into the very presence of God in heaven (represented by the entrance of the high priest into the most holy place on the day of atonement), Christ, our heavenly high priest, now serves as our mediator at the throne of God.

The spatial and functional distinction of the desert tent is understood to be a symbolic ("typical") representation of the very plan of salvation ("Heilsgeschichte"). It teaches the spiritual lesson that Christ—including his earthly sacrifice as well as his heavenly ministry—is all and everything to those who follow him by faith. Although the old sanctuary cultus has lost its salvific function, it still teaches an important theological truth as well as a crucial spiritual lesson.

In contrast to this approach, Seventh-day Adventist interpreters have traditionally focused on the meaning of the cleansing of the heavenly sanctuary as taught by Daniel 8:14. When Hiram Edson, O.R.L. Crozier, and F. B. Hahn studied the Scriptures in search of light that would make sense of the disappointment of 1844, they found Hebrews 9 particularly helpful in explaining Daniel 8:14. Interpreting Hebrews as a prophecy (!) to be fulfilled in the last days, they read Hebrews 9 as an exact description of what happened on and since October 22, 1844. To them, the expression "last days" and "end of the ages" particularly denoted their own time (1:1ff, 9:26).

Today, Adventist interpreters unanimously discuss the book of Hebrews in its historical and literary context, following the established rules of exegesis, the science of biblical interpretation. What Hebrews teaches, it teaches already to its original readers. This brings modern Adventist Bible students into tension, possibly even contradiction, with either Scripture or church doctrine. Adventist denominational history shows the tragic outcome of the confusion resulting from a dogmatic (preconceived) reading of the text and the attempt by some to uphold Scripture, even against established church teaching. Canright, Ballenger, Fletcher, Conradi, Ford, and others foundered on this very issue.

As long as Adventists interpret Daniel 8:14 primarily in the light of the book of Hebrews without letting the latter speak for itself first, they will not be able to avoid mixing up the concern of Daniel with that of the New Testament writer. However, if both are exegeted properly and understood in their own historical and literary contexts, the tension, and possible contradiction, disappear. Whereas Daniel (like the book of Revelation) is concerned with the deadly attack of the Antichrist against the church and the divine answer to it (that is, the judgment), Hebrews discusses the importance for the believers of the high priestly ministry of Christ, which began at Calvary and lasts until his reappearance (9:28)—and even beyond.

In order properly to understand the book of Daniel, we need to be familiar with the book of Revelation, the New Testament apocalypse. On the other hand, an adequate understanding of Hebrews requires knowledge of the Israelite cultus as explained in the book of Leviticus. Mixing Hebrews (and Leviticus) with Daniel almost inevitably leads to misunderstanding and confusion.

What does all of this mean to us today? This is the practical, and crucial, question we need to address in closing. The answer can best be given by reading the exhortatory sections of Hebrews. They leave no doubt as to the author’s true intention in writing the book. Hebrews 4:14-16, 6:18-20, and 10:19-25, in particular, summarize the pastoral concern of the author: Hold firmly to the faith and draw near to God! This, in turn, is expressed in a nutshell in Chapter 8, starting with the first verse: "The point of what we are saying is this: We do have such a high priest, who sat down at the right hand of the throne of the Majesty in heaven, and who serves in the sanctuary, the true tabernacle set up by the Lord, not by man" (NIV). This is the sanctuary doctrine of Hebrews, the good news of this inspired and inspiring book. It is no less true and good today than it was two thousand years ago.

1. The essay can be viewed online from Friedensau Adventist University via academia.edu

Rolf J. Pöhler is professor of systematic theology at Friedensau Adventist University. He studied theology in Germany and the United States, earning a doctoral degree in systematic theology at Andrews University (Michigan) in 1995, his dissertation titled “Change in Seventh-day Adventist Theology.” He is director of the Institute of Adventist Studies and of the Master of Theological Studies program. He is author and editor of several books and numerous articles.

Title image: The Building of the Tabernacle by Adriaen van Stalbemt (1580–1662).