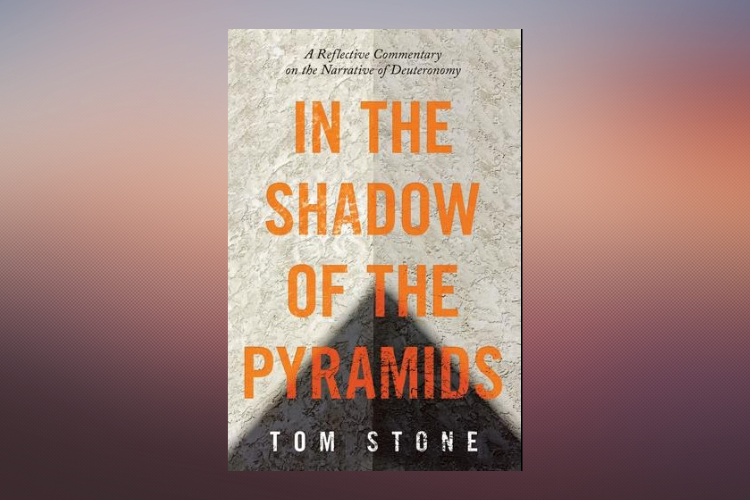 Editor’s note: This week’s Adult Bible Study Guide lesson discusses the covenant described in the book of Deuteronomy. Here is an excerpt from Tom Stone’s book In the Shadow of the Pyramids: A Reflective Commentary on the Narrative of Deuteronomy, appearing here courtesy of the author.

Excerpt from In the Shadow of the Pyramids: Chapter 2

In Genesis 15, God reiterates the promise that Abram and Sarai will have a child, an heir, a lineage. A hope that the “great nation” promise will in fact come true. It is made extremely clear that the child will not come through anyone else: not his servant nor Sarai’s servants, but through Sarai and him alone. Then in verse 5, God takes Abram by the hand and walks him outside his tent and tells him to count the stars. His descendants, the great nation promised to him, will be as numerous as the stars in the sky.

So what does Abram do?

His belief is all it took for God to count him as righteous. Simply believing that what God says will happen. Even though Abram couldn’t see it for himself, even though naturally he and Sarai were beyond children and the future looked like retirement, Abram believed.

He simply stood before God and believed in his heart that God meant it.

And that is all God needed to count him as righteous!

All we need to do is simply believe wholeheartedly that God is who He is, and that what He says will happen, and we are counted as righteous. That’s it. No works. No actions. No need to relentlessly please Him or placate Him. We just need to believe. All God yearns for is a heart full of belief in Him. A heart that acknowledges Him as Creator and as the God who will do what He says He will do. A heart like the one Adam and Eve were created to live from. A heart that seeks to reverse the implications of the Garden of Eden tragedy. A heart solely satisfied with knowing Agape in the flesh. Your heart.

But then Abram continues the conversation, and says: “Well, God, how do I know You will do what You say You will do? How will You show me You really mean this?” (Genesis 15: 8)

He said to him, “Bring me a heifer three years old, a female goat three years old, a ram three years old, a turtledove, and a young pigeon.” He brought him all these and cut them in two, laying each half over against the other; but he did not cut the birds in two. And when birds of prey came down on the carcasses, Abram drove them away.]

Genesis 15: 9-11 describe an ancient Mesopotamian ritual that happened frequently in those days. As writing instruments were scarce to come by and the level and need for literacy were low, people made promises through other means. When two people wanted to commit their life to a vow, such as a business enterprise or a longterm family commitment, they would take a three-year old cow, a three-year-old ram, a three-year-old female goat, a young pigeon and a turtle dove and split them all in half. They would lay the halves of the animals out on either side of a path, and both parties committing themselves to the agreement would walk between the carcasses. The implication was that both parties were saying to each other, “So be done to me, as we did to the animals, if I don’t keep my side of the promise.”

They were committing their life to the agreement. Binding themselves to their word, with the prospect of death if they failed to follow through.

[When the sun had gone down and it was dark, a smoking fire-pot and a flaming torch passed between these pieces. (Genesis 15: 17)]

In Genesis 15:17 we find out why Abram was asked to lay out the animals. While God is speaking to Abram, a smoking fire-pot and a flaming torch pass between the animal carcasses. God, right here in Genesis 15, is giving His word that the promises to Abram and his descendants

will be kept. Not just that, but He is committing His life to it. In effect He is implying that He will die to keep those promises. If it comes to it, God will lay down His own life to ensure there is a great nation, a nation that transforms every other nation on earth. A nation that

inherits a promised land full of milk and honey. A nation through whom Yahweh will do something different.

This is the gospel right here, in Genesis 15.

The good news is that God loved us so much that over 1500 years before Jesus walked the earth, He had already committed His own life to a promise to restore humanity to its pre-sin state. This is

Agape, Hesed, in the flesh. That human beings are so adored, so treasured, by God that He would be willing to lay down His life to win our hearts back. To seduce us once more for eternity. To

conquer what separates us and Him living side by side, and restore humanity to its fullness. The fullness He Himself imagined at the very beginning. John 3:16 is in Genesis 15. The hope that God was deathly serious about fulfilling His promise would have been passed on from generation to generation as the years went by. Abraham and Sarah gave birth to Isaac, Isaac had two children, those two children had many sons and daughters of their own, and a great nation was

soon on the horizon. Yahweh’s promise of restoration consumed every new generation until Jacob’s crops withered and died. A famine forced that small nation to move to Egypt, where Joseph had prepared a place for them.

Living in the shadow of the pyramids

That nation multiplied until it became so great that they were feared by the very representative of the Egyptian gods. Pharoah’s fear led to four hundred years of Israelite toil in the shadow of the Pyramids. At which point, an 80-year-old man called Moses was called by God through a not so-burning bush in the wilderness to return to Egypt and “let My people go.”

Albeit it took ten idol-shattering plagues to demolish Pharoah’s regime, but eventually, the Israelites were allowed to leave. Slavery was over. The Pyramids would no longer overshadow their existence. The worries of Egypt were buried at the bottom of the Red Sea.

They were friends with freedom again.

If only for a few weeks!

Lack of faith in the power of an unseen God transformed what was supposed to be a short desert crossing into a 40-year sojourn. Eventually the generation of adults that left Egypt died and the new generation were ready to inherit what God had promised them hundreds of years earlier; the stories of God’s conversations with Abram ringing in their ears. The hope that God was going to do something with this nation that would bless the whole world.

Something incredible. It was coming. Perhaps this was it, the moment they had waited for. The moment they would enter the promised land and God would fulfil the covenant He had made.

God was going to do what He had said He would do. This was it.

There they stood, the Israelite nation poised on the threshold of the promised land, full of hope. Full of expectation.

Ready to put the shadow of the Pyramids behind them.

It is at this point in the Biblical narrative, with the themes of covenant, promise and restoration fresh in our mind, that we open the book of Deuteronomy.