The Quest for Rest: The Radical Nature of Sabbath 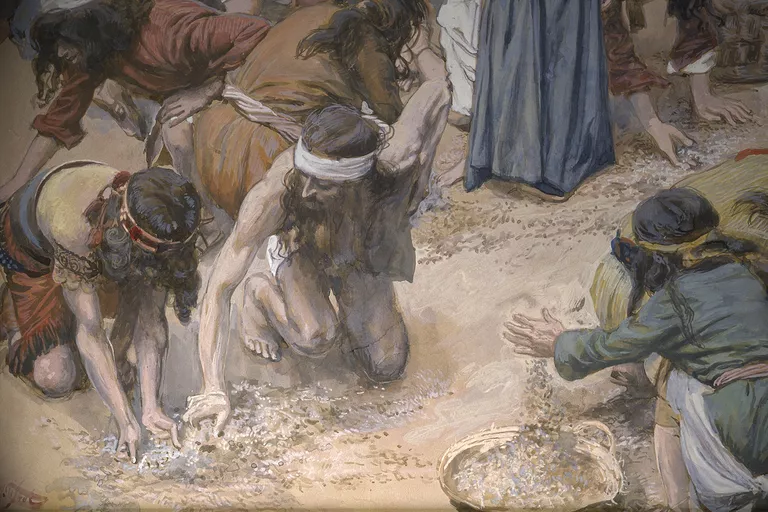 Olympic gymnast Simone Biles was (and continues to be) disparaged by many for her choice to bow out of the games after developing a dangerous case of what gymnasts call "the twisties." I'm thankful for her courage in modeling resistance to our culture of overwork and exploitation. As usual, she is proving to be a champion of champions—this time for resting rather than performing.

I stand in awe of how Biles has chosen to love and care for herself over and despite the sacrificial perfectionistic messages that are so drummed into us by our culture—a culture shaped more by capitalism with its emphasis on consuming, extracting, hoarding, and exploiting labor than by Christian principles.

I want to remind us that rest—or Sabbath in scripture—is a form of resistance to tyranny.

How so? Last weekend, I preached on the miracle of Jesus feeding the 5,000 with loaves and fishes from John 6:1-14 and realized it is fundamentally about the fact that God loves us because of who we are, not because of the work we do.

Growing up, I never got this point because I was taught that Jesus worked miracles like this in order to prove his divinity. But now I can see that Jesus was doing something revolutionary.
What if we read the story this way:
Phillip awakens from a nice nap in the grass; the sound of distant waves and a gentle breeze. What a relief to be away from the crowds as they scurry about planning for the Passover celebration. Phillip is saddened as he reflects on how the city has grown crowded in recent years with increasing numbers of families displaced by Roman land confiscation.

Phillip breathes in the fresh sea air, then sits up and rubs his eyes eager to gaze into the distance.

What on earth?! He stands to get a better look, and the other disciples come running. Hordes of people trudging toward the mountainside. What if the crowd grows unruly?

Jesus stands in front of the crowd, calm and thoughtful.

He turns and smiles, “Think you can rustle up some food for these folks?”

Phillip feels his face grow hot, “You have to be joking! Jesus, it would cost a half a year’s wages to feed them all!”

Suddenly Peter’s brother Andrew comes running up the hill with a boy keeping pace alongside him while carrying a basket. “I found this boy who has two fish and some Passover bread.” Jesus smiles and thanks to the boy. He then turns to the disciples and instructs them to have the crowd sit on the grass in small groups. They gather slowly and settle down. Jesus comes to the top of the hill, holds up the basket, and begins to give thanks. The crowd grows quiet, mesmerized by his words and the smiling boy beside him.

The boy then takes the basket and gives it to the first cluster. He gestures for others to do the same. People pull what they have from their packs and cloaks. They eat. Warmth and camaraderie spread through the crowd as they share a meal. Jesus then asks them to collect the leftovers. “Leftovers?” Philip murmurs. Sure enough, they each collect a basket full of bread. One for each of the twelve. Then Philip understands. Manna, from heaven. The remaining baskets, proof of God’s promised abundance, including a day of rest.

Using godly power to multiply food? Not bad. Getting people to share out of confidence in God’s abundance? Groundbreaking. I’d call that the bigger miracle.
These themes are critical to understanding the spiritual lessons of the text.
John 6:1-14 very deliberately parallels the manna from heaven story in Exodus 16. Just as the Hebrews escape Egypt to the wilderness and are treated to a miracle bread called Manna, the Jews of John’s Gospel escape Roman occupation to the wilderness of Galilee to be fed. And it’s Passover no less (Hint. Hint. Wink. Wink). ‘PASSOVER’ says the storyteller. Exodus liberation, unleavened bread, and manna from heaven are top of mind as we mull over the meaning of Jesus’ actions.

The author of the book, by evoking the manna story, is making two moral points. First, God tells the people when collecting manna to take no more than they need for each day. A few poor souls try to get rich or bank it. The next day they open their baskets to find them maggot-infested. God’s point: don’t be greedy, and do not hoard. God then tells them, on the sixth day, to gather enough for two days so that they can rest on the sabbath.

The surplus at the end of the Gospel story (a twelve basket surplus) is a call back to these manna rules: share and rest, create an economy where you do the same, for you are no longer slaves. This is God’s economy—take just what you need and share, then there will be enough for everyone. Rest—for the love of God, even God rested after working! You are not the sum of what you produce; nor should any human being be treated as a means of production, a low-wage laborer, much less a slave (or a consumer for that matter). You are God’s child. Rest and be.
What stories of scarcity have been drummed into you all your life? Do you truly know you are more than the sum of how hard you work? My father grew up with the story of his own Dad, who was an orphan as was his dad before him. He never felt he had enough, even after he became a prominent lawyer. He told me he heard “the hoofbeat of the apocalypse bearing down behind him” at all times.

A colleague once told me that his father frequently told him, “Always look over your shoulder because there will always be someone coming up behind you to knock you down and take your place.” This belief played out in their work habits of competitiveness and the tendency to overwork. We are all susceptible to this, and we all deserve better.

Don’t let the empire turn you into a unit of production or influence you to turn others into such. Resist this norm by following God’s model and commands to make time for rest, for the community, for spiritual nurture, for mindfulness. Trust God’s abundance and let go of the scarcity mindset. If Simone Biles can throw off the yoke while the world is watching, you can too.

This article originally appeared on the author's website and is republished here with permission.

Reverend Jennifer Butler is the founding CEO of Faith in Public Life, which works to change the narrative about the role of faith in politics, wins major policy victories, and empowers religious leaders to fight for the common good. Jennifer spent ten years working in the field of international human rights representing the Presbyterian Church (USA) at the United Nations. She’s the former chair of the White House Council on Faith and Neighborhood Partnerships. She is the author of Born Again: The Christian Right Globalized and Who Stole My Bible?: Reclaiming Scripture as a Handbook for Resisting Tyranny.