Is God Still With Us?

Is God Still With Us? 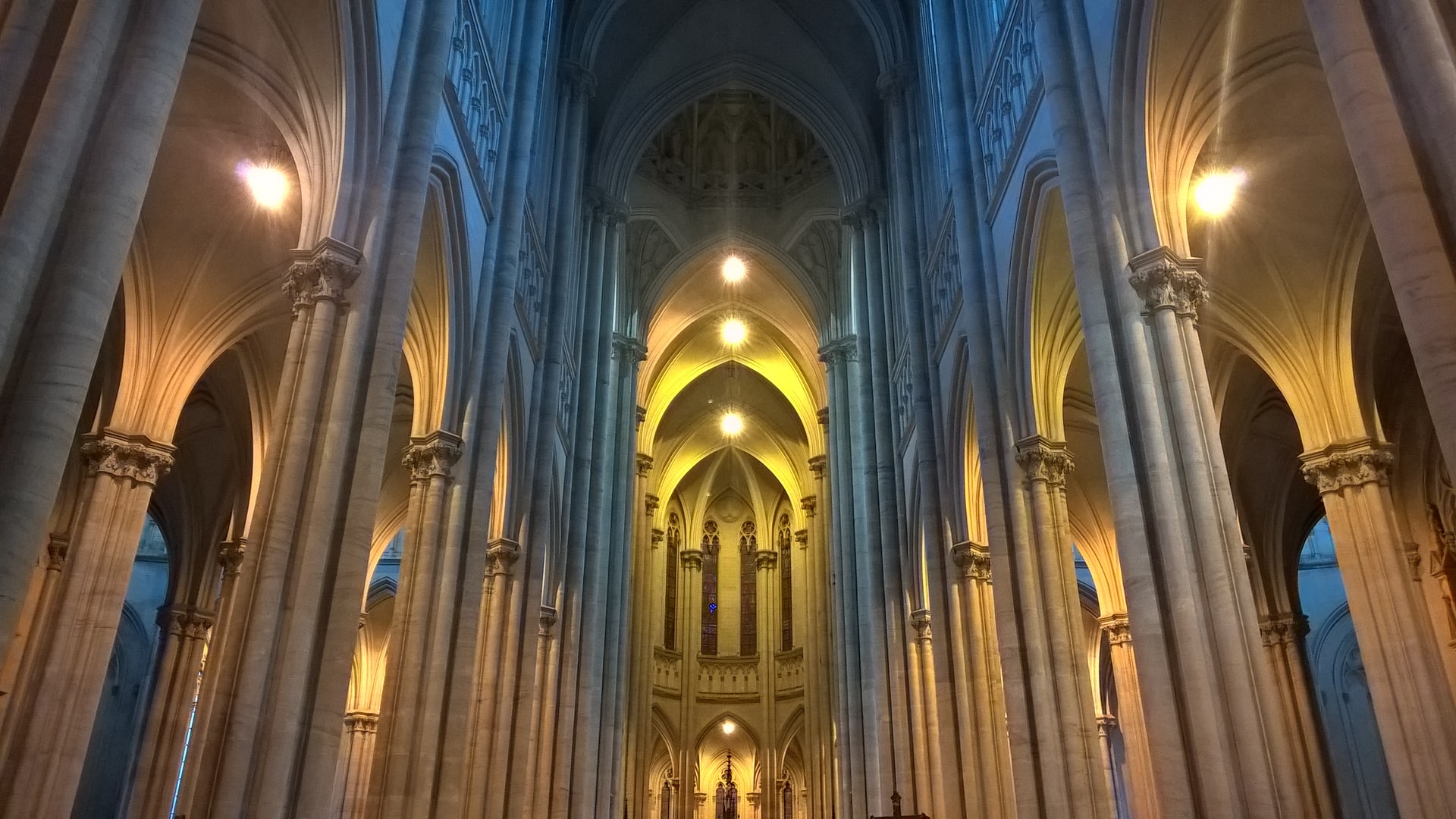 “Is God still with us?” Or is He just another story from our childhood, a comforting tradition from our past? This question I increasingly ask as I age must have haunted the Hebrews enslaved in Egypt. Oppressed by taskmasters, their sons targeted by Pharaoh, their one hero, Moses, exiled to the Arabian Desert for murder, they had reason to wonder, “Is the God of our father Abraham still with us?”

God replies by sending Moses to rescue the Hebrews from slavery. Then, God asks Moses to build him a home so He can live right in the middle of His people!

In this portable tent, God tells the story of salvation in three acts: how God saves His people from their sins, how He is with us today, and how God will be with us in the future.

Act one is staged in the Sanctuary courtyard. The animals sacrificed on the alter previewed Jesus’ future death when God would enter into the human experience of death in our place.

Gabriel reminded Joseph of the message of the Sanctuary courtyard drama in Matthew 1:20-23:

Joseph, son of David, do not fear to take Mary as your wife, for that which is conceived in her is from the Holy Spirit. She will bear a son and you shall call his name Jesus, “for he will save his people from their sins. All this took place to fulfill what the Lord had spoken by the prophet: Behold the virgin shall conceive and bear a son, and they shall call his name Immanuel, (which means, God with us).

For many Christians, the first act in the Story of Salvation is the whole story. If Jesus’ death pays the complete penalty for our sins, what is left to teach about the plan of salvation? Why does the Sanctuary drama have two more acts?

In act two, Jesus is symbolized not by the sacrifice of a lamb, but by the work of the High Priest. Each day the priest came into the Holy Place as the people’s representative to plead their case before God. The priest burned incense to symbolize the prayers of the people ascending to God. The blood of the sacrifices was sprinkled, transferring guilt from the sinner to the sanctuary. But how does this part of the drama answer the question, “Is God still with us today?”

While my wife was managing a hospital unit, one of her best workers was jailed for a minor probation violation. Lanell wasn’t about to lose him, so she went to his court hearing.

When Richard’s case came up the judge asked if anyone wanted to speak on his behalf. To the judge’s surprise, my wife walked forward, “I’m here to speak for Richard. I’m his manager at Community Hospital.”

“Oh,” the judge replied, “Do you know my brother-in-law, Dr. Lanahan?”

Dr. Lanahan treated patients in my wife’s unit; he was my personal physician and helped us conduct stop-smoking plans. As the accused, their lawyers, and family waited, the business of the court stopped while my wife and the judge talked about his brother-in-law, Dr. Lanahan.

Eventually, the judge asked Lanell, “What do you have to say for Richard?”

“He’s my best worker. He’s changed his life around; please drop his charges and release him from jail so he can get back to work.” With a bang of his gavel, the judge granted my wife’s petition!

What Lanell did for Richard is what Jesus does for us in heaven. He speaks for us, defending us against the accusations of Satan.

This is what the Holy place ministry symbolized. Hebrews 4:14-16 says:

Since then, we have a great high priest who has passed through the heavens, Jesus, the Son of God, let us hold fast our confession. For we do not have a high priest who is unable to sympathize with our weaknesses, but one who in every respect has been tempted as we are, yet without sin. Let us then with confidence draw near to the throne of grace that we may receive mercy and find grace to help in time of need.

That’s Good News! But sometimes we still long for Jesus’ physical presence, for the intimacy of God’s touch that Adam and Eve enjoyed. We want what John writes about in John 1:14 of Jesus’ life on earth:

And the Word became flesh and dwelt among us, and we have seen his glory, glory as of the only Son from the Father, full of grace and truth.

When Jesus became human, his physical body limited him to one location. While He is in heaven acting as our personal representative, He can only be with us through His Helper, the Holy Spirit.

John 14:16-18: “And I will ask the Father, and he will give you another Helper, to be with you forever, even the Spirit of Truth, whom the world cannot receive, because it neither sees him nor knows him. You know him for he dwells with you and will be in you. I will not leave you as orphans; I will come to you.”

In Act three of the Sanctuary drama, Jesus promises He will again become Immanuel, God with Us.

“And I heard a loud voice from the throne saying, “Behold the dwelling place of God is with man. He will dwell with them and they will be his people, and God himself will be with them as their God” (Rev 21:3).

Jesus’ goal of living with us again often gets lost in all the details of the Sanctuary’s third act, the Day of Atonement. There’s the strange story of the High Priest picking one goat to be slaughtered and then sprinkling that goat’s blood before the ark in the Most Holy place. Then there’s the ceremony of choosing a second goat, named the Azazel, a Hebrew word representing the forces fighting against God. This goat was not killed. Instead, the high priest confessed over it all the sins of Israel accumulated over the year. The goat was then led into a remote area and was left there to die. The people watching rejoiced that their sins had been not just forgiven but eliminated. They were clean and free.

A story from a friend helped me understand the final act of the Sanctuary Drama. He felt discouraged when he made a call for his evangelism audience members to accept Jesus, but no one came forward. After the meeting, three sisters approached him. “There were so many people in our row, we couldn’t get out to come forward, but we want to be baptized.”

“May I talk with your parents,” he asked? They pointed to a couple who were faithful members of the church. When the evangelist approached the couple, he learned they were not the girls’ real parents.

Each sister had been sexually abused by their father and their brothers. When their mother reported the abuse to the police, the father shot the mother. After the father was jailed for rape and murder, the Christian couple had opened their home to provide the girls a safe place to live.

“We’ve been sharing the Gospel with the sisters, so we are glad they are requesting baptism,” the couple told my friend. “Come over next Sabbath for lunch.”

When the evangelist met with the girls, each asked questions but finally the oldest, a nineteen-year-old, asked, “How can I be baptized if I hate men so much, if I can’t forgive those who hurt us so much?”

My friend told the oldest sister, “Even if your dad somehow escapes from prison, God will see that he gets justice.”

She replied, “I’m ready to be baptized. I want to give up my hatred.”

“How did you know to give that answer?” I asked.

My friend replied, “Because I was sexually abused repeatedly as a child. I went into that meeting knowing how those girls felt. And the only way I got through my own abuse was believing the Sanctuary’s truth that God is my abusers’ judge.

“I don’t know where my abusers are now. If they have not accepted His salvation, then He is their judge and can do a far better job than I can in giving them what they deserve. But if they are Christians, then Jesus’ death on the Cross forgave their sin of abuse just as his death forgave my sins. He’s justified them. They no longer pose a threat to others. The ultimate justice is turning murderers like Moses, persecutors like Paul, into the greatest prophets and preachers of the Gospel.”

The story of Salvation told in the Sanctuary’s three acts reveals that Jesus paid the price for all sin. Not just our sin but our worst tormentor’s sins as well. Jesus suffers with us and for us. We can lay our burden on him to either forgive or judge.

“Is God still with us?” No matter what we face, whether tragedy, injustice, or simply a longing for God’s presence, the central truth of the sanctuary says: “Yes, Immanuel—God with us—is still with us!” He was with us on the Cross as our substitute was dying the death we deserved. He is with us through His Spirit as our personal representative in heaven. And when He has removed every trace of sin from the universe, He will recreate this world and live with us on this earth for eternity.

Douglas Jacobs is research professor in the School of Religion at Southern Adventist University.

Photo by Nicolas Brigante on Unsplash