The Lion’s Den and “the Tyranny of Contractual Thinking”

The Lion’s Den and “the Tyranny of Contractual Thinking” 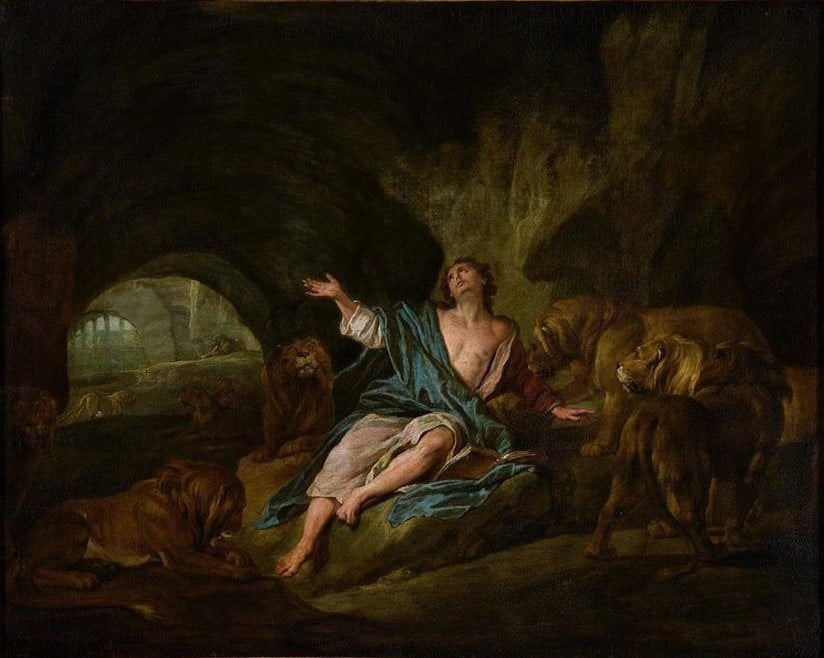 Half of my headline is borrowed: “the tyranny of contractual thinking.” I owe it to Danna Nolan Fewell, professor of Hebrew Bible and an expert on parts of the Bible many readers find messy, such as Judges. I heard her give a presentation at an annual meeting of the Society of Biblical Literature. The title of her paper was “Working Girls: Subverting the Master Narrative of Judges” (2018). Toward the end of Judges, there are savage cycles of retribution and killing in order that justice may be done. Fewell says that we see retributive justice that “has lost all sense of balance.” The main character in the story ending is a Levite. He has been less than a gentleman in relation to the concubine he took to be his partner (Judg. 19:1), and his feigned outrage at the end triggers the first cycle of violence (Judg. 19:29-20:21). The ensuing mayhem gives him an easy escape. In Fewell’s words, “the abusive Levite simply disappears—most likely assigned to another parish.” His vaunted rectitude is mirrored in similar contractual rectitude among those who oversee the retribution and afterwards deal with a retribution gone awry. And the oath-takers in the story,

rather than face the consequences of either upholding or breaking the oath, they plot a series of evasive maneuvers: First, they massacre the unsuspecting city of Jabesh-Gilead saving only the city’s virgins who are then trafficked to the men of Benjamin. Then, they plot with the remnant of Benjamin, instructing them to abduct the girls scheduled to dance at the cultic festival at Shiloh. Here again, young women are commodities whose lives are forever changed, even destroyed, by the tyranny of contractual thinking, and . . . are given no voice whatsoever in how to navigate their sentence.

There it is: “the tyranny of contractual thinking.” This is an apt description for the violent contortions in Judges. The phrase also works for the machinations of government officials in Persia, described in Daniel 6.

Law as the Means of Oppression

Daniel is a winner every time he appears in the Babylonian phase of his exile, and he emerges as a winner once more in the Medo-Persian phase. He so distinguishes himself that Darius is about to make him the highest official in the land (Dan. 6:1-3). When lower-level officials discover the king’s intent, they mobilize to put a limit to Daniel’s influence. Were they motivated by envy? Perhaps. Were they worried that Daniel would require a standard of integrity that they could not meet; that is, that he could clamp down on government corruption? This seems more likely. Daniel’s conduct is exemplary, however, and the first attempt to bring him down fizzles (Dan. 6:4).

What now? We read that Daniel’s enemies in the government decide to make his religion work against him. This is quite specious. It will not be lost on readers that Daniel’s religious commitment is closely related to his integrity (Dan. 6:5-6). In fact, it is his relationship to God that grounds his integrity, and this is the relationship that matters most to him. The plotters are sure of their prey. They realize that they can get the king to make a law that puts Daniel at risk, and they are confident that the trap will work. That is, they are certain that Daniel will not conform to the law that they devise for his undoing.

All the presidents of the kingdom, the prefects and the satraps, the counselors and the governors are agreed that the king should establish an ordinance and enforce an interdict, that whoever prays to anyone, divine or human, for thirty days, except to you, O king, shall be thrown into a den of lions (Dan. 6:7).

Here, it is the legal trappings that interest us. It works like this: The officials are envious of Daniel or afraid that he is a threat to their corrupt ways. They seek to eliminate him by professing loyalty to the king. We have seen sycophants earlier in this book, in relation to Nebuchadnezzar and Belshazzar. The sycophants in this chapter is a good place for understanding the character of sycophancy. Is the sycophant a person who chiefly has the interest of his or her patron at heart? This is possible. Or, as here, is the sycophant a person who chiefly has his or her own interest at heart but who casts their self-interest as concern for the patron? It is the latter version that works best in this chapter. In fact, the plotters are working against the interests of the king—they know that he will not like what they are trying to achieve once he finds out (Dan. 6:12-16). Nevertheless, they succeed in clothing their interest in the guise of interest for him. Sycophants are not only opportunistic; they can also be ruthless. (Know, too, that the ruler who surrounds himself with sycophants, has a reason to feel anxious).

How do the plotters achieve their goal? They legislate; that is how. They use law—the Constitution, if you wish. And then, with the law in place, the plotters adopt a tyrannical stance toward the king and Daniel (Dan. 6:12-16). The king is obligated to abide by the law, and the law, though crazily unjust, will be the means that lands Daniel in the lion’s den. “The tyranny of contractual thinking” in Daniel differs on many points from the tyranny seen in Judges, but they have legal territory in common. “Know, O king, that it is the law of the Medes and the Persians that no interdict or ordinance that the king establishes can be changed” (Dan. 6:15).

Call it the rule of law. Call their determination to enforce it the original, literal meaning of the law. Then call it tyranny because it is a form of tyranny, constraining the king and intending to kill Daniel.

Daniel is delivered from the lion’s den, we know. The men behind the conspiracy are duly punished (Dan. 6:16-24). The narrator does not explain how they are held to account within the legal parameters of Medo-Persian law. The story reads as though their sycophantic scheming is justification for the king to take action against them.

Tyranny of Contractual Thinking in Our Time

We shall not have to look far to discover how law and contractual thinking conspire to make tyrannical conduct possible in our time. Just over four hundred years ago, the first slaves arrived in Virginia. More than twelve million slaves would arrive in the New World, double the number of victims that died in the Holocaust. The US Constitution left out specific mention of slavery. Silence on this point was intentional, counting on implicit contractual thinking to safeguard slavery without putting the inequality starkly on paper. Constitutionally, the years leading up to the Civil War seemed to favor the pro-slavery advocates. William Lloyd Garrison, a leading abolitionist, called the Constitution “a Covenant with Death and an Agreement with Hell” for condoning slavery implicitly.[1] “Ours is the government of the white man,” said John C. Calhoun, confident that he had support in the Constitution and what the framers meant.[2] When the Supreme Court in 1857 ruled against the plaintiff in Dred Scott v. Sanford by a vote of seven to two, the contractual thinking was evident. “Congress had no power to limit slavery in the states,” Chief Justice Roger Taney wrote for the majority, “because the men who wrote the Constitution considered people of African descent ‘beings of an inferior order, and altogether unfit to associate with the white race, either in social or political relations, and so far inferior that they had no rights which the white man was bound to respect.’”[3] The morality of slavery was no match for what “the men who wrote the Constitution considered people of African descent” to be, and the Chief Justice wrote as though he shared their sentiment. Five of the judges were themselves slaveholders. If Taney and the six judges who voted with him were correct as to what the framers had meant, or if the framers’ opinion was decisive although they mistakenly approved slavery, there was no escape from the tyrannical import of the Constitution. What was left unsaid in the Constitution of the Union would not be unsaid in the Confederate statutes. “Our new government is founded upon exactly the opposite idea [opposite of equality],” said Alexander Stephens, the Confederate vice president, “its foundations are laid, its cornerstone rests, upon the great truth that the negro is not equal to the white man; that slavery . . . is his natural and moral condition. This, our new government, is the first, in the history of the world, based upon this great physical, philosophical, and moral truth.”[4]

Slavery came to an end, but it was followed by a century of segregation and Jim Crow laws. “Separate but equal,” the Supreme Court declared by a vote of seven to one in Plessy v. Ferguson in 1896: separate schools, separate churches, separate restaurants, separate bathrooms, separate railroad cars, even separate Bibles.[5] Whites and blacks were separate, to be sure, but they were not equal. “In Louisiana, black voter registration dropped from 130,000 in 1898 to 5,300 in 1908, and to 730 in 1910.”[6] It happed by design, not by a law of nature. Racial animus continued under cover of “the tyranny of contractual thinking,” a tyranny disinclined to yield, as though racism is a stance from which it is impossible to recover. In Jill Lepore’s exquisite account of US history, it is impossible to divorce the dizzying political fluctuations in the United States today from the history of slavery.

The Nuremberg Laws in pre-war Germany were exactly that, laws, written and implemented for the purpose of marginalizing the Jews in preparation for their extermination. People were willing to do the bidding of Der Führer. Indeed, they may have been willing to do more than his bidding, to exceed his expectations. Like the sycophants in Daniel 6, it was career-enhancing to be zealous for the status of the Führer, a strategically wise move that concealed self-interest as concern for him.

I subscribe to the Israeli newspaper Haaretz. I cannot count the instances when the writers in this remarkable newspaper describe how the government deprives Palestinians of land and property legally, that is, by framing laws that provides legal cover for conduct that, to Palestinians, is tyrannical.

Or the travel ban, enacted three years ago, now expanded to include Muslim-majority countries in Africa. Or “the new Jim Crow” that has swelled the prison population of African Americans to dizzying levels.[7] Or the laws of the Medes and the Persians that landed Daniel in the lion’s den.

Sigve Tonstad is professor of theology at Loma Linda University's School of Religion.