Education: Diminishing the Value of Work? 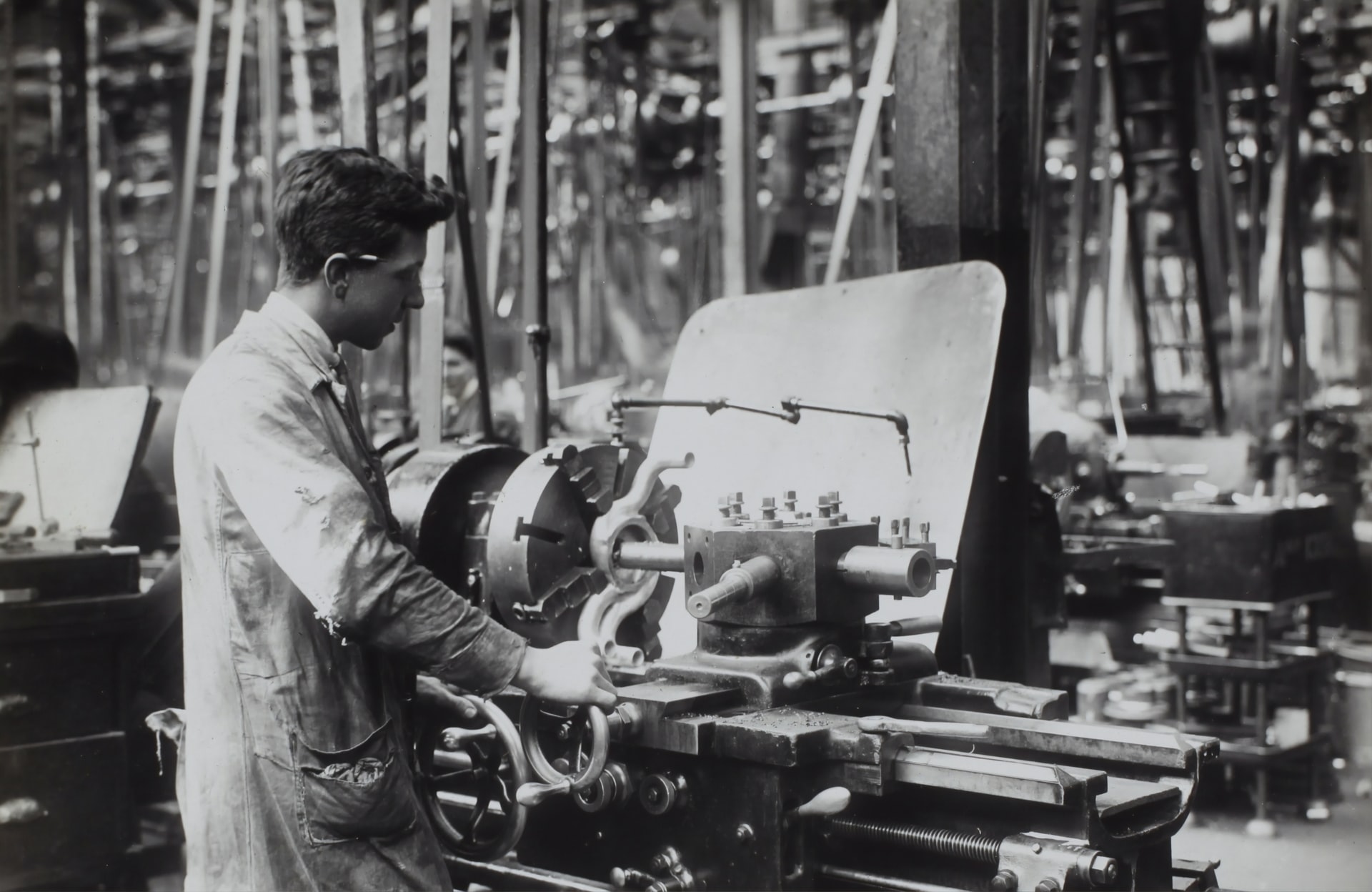 The editors of the Sabbath School quarterly pulled a subtle trick with their title for this lesson, “The Christian and Work.” For each of the four lessons before this, the title included the word “education.” Is the quarterly subtly supporting the popular conception that a good education diminishes the need for hard work?

Many of my students have told me that their parents have drilled it into them that they should get an education so that they don’t have to dig ditches the rest of their life. If one looks at the spectrum of “jobs” available in our world, one moves from the very concrete world of menial labor to the cerebral world of the PhD. In some cases, limited mental capacities limit the options. But using “formal” schooling as a norm can be terribly misleading. The life of Steve Jobs, the co-founder of Apple, is a primary example. Raised by adoptive parents, he says that he learned more in his 4th-grade year in school than in any other. His teacher bribed him (“I really want you to finish this workbook. I’ll give you $5 to do it.”) and she finally broke through and his mental activity flourished. He enrolled at Reed College but dropped out after one semester. So, his highest formal qualification was a high school diploma. He knew how to work, he knew how to study, but his formal qualifications in education were not strong.

For this lesson on “work,” we will focus on some key biblical passages that will help us shape a biblical approach to “work” and “education.” Three Old Testament passages emphasize three different points for us:

1. The entrance of sin changed the nature of human work. Genesis 3:19 links “sweaty” work with the entrance of sin: “By the sweat of your face you shall eat bread. . . ” (NRSV). One can surmise the pre-fall work was more “fun” than work after the fall.

2. God inspired human beings to produce beautiful things through their work. Exodus 31:1–5 tells how the men who led out in the shaping of the wilderness tabernacle were “filled” with “divine spirit.” Thus, they became skillful and productive.

But clearly, the most fruitful source for good counsel on work is the book of Proverbs. Here are four pointed Proverbs:

9 How long will you lie there, O lazybones?

When will you rise from your sleep?

10 A little sleep, a little slumber,

a little folding of the hands to rest,

11 and poverty will come upon you like a robber,

but the hand of the diligent makes rich.

5 A child who gathers in summer is prudent,

but a child who sleeps in harvest brings shame.

The hand of the diligent will rule,

while the lazy will be put to forced labor.

The appetite of workers works for them;

their hunger urges them on.

For a more fun-loving view of work, the book of Ecclesiastes is notable:

There is nothing better for mortals than to eat and drink, and find enjoyment in their toil. This also, I saw, is from the hand of God.

I know that there is nothing better for them than to be happy and enjoy themselves as long as they live; moreover, it is God’s gift that all should eat and drink and take pleasure in all their toil.

The suggestion that work could and should be fun brought to mind a quote from one of our students in a brief commencement week-end speech several years ago. He was graduating from our flying program and perhaps felt the need to justify a job that was fun. But I believe there is a powerful truth in what he said: “If you enjoy what you are doing, then you never have to go to ‘work.’”

Ecclesiastes 9:10 (NRSV): Whatever we do deserves our full attention.

Whatever your hand finds to do, do with your might; for there is no work or thought or knowledge or wisdom in Sheol, to which you are going.

To sum up a well-rounded Old Testament perspective, work should be both fun and productive, a blessing to the world.

A New Testament Perspective on Work

Turning to New Testament attitudes toward work, the real poster child is the young man Jesus, a carpenter turned itinerant evangelist at age 30. This poem by the English poet, Geoffrey Studdert-Kennedy (1883–1929), captures some of the mystique of Jesus’s work ethic:

“Close by the heedless worker’s side”[1]

Close by the heedless worker’s side,

The carpenter of Nazareth,

Longing to pick the hammer up

And strike a blow;

Longing to feel his plane swing out,

The fragrant shavings falling down

Because this is my work, O Lord,

It must be thine;

Because it is a human task

Take me, and brand me with thy Cross,

Another component of a biblical perspective on work would be the work credentials for the twelve apostles. Actually, we know very little about them. Here is the list of names as found in Matthew 10:2–4: “Simon, also known as Peter, and his brother Andrew; James son of Zebedee, and his brother John; Philip and Bartholomew; Thomas and Matthew the tax collector; James son of Alphaeus, and Thaddaeus; Simon the Cananaean, and Judas Iscariot.”

Of these, four were fishermen (Andrew and Peter, James and John) and Matthew was a tax collector. That’s all. Acts 4:13 puts it bluntly: “The members of the Council were amazed to see how bold Peter and John were and to learn that they were ordinary men of no education. They realized then that they had been companions of Jesus” (Good News Translation).

Yet Jesus also called Saul of Tarsus, a highly educated man. Thirteen of the twenty-seven New Testament books have traditionally been attributed to Saul/Paul. He was highly educated, but still a tentmaker. Acts 18:1–3 tells how Paul worked with Aquila and Priscilla, fellow tentmakers. Perhaps it was Paul’s strong work ethic that shaped his comments about work in 2 Thessalonians 3:10–12: “10 For even when we were with you, we gave you this command: Anyone unwilling to work should not eat. 11 For we hear that some of you are living in idleness, mere busybodies, not doing any work. 12 Now such persons we command and exhort in the Lord Jesus Christ to do their work quietly and to earn their own living” (NRSV)

In our sinful world, a certain tension between the work of the mind and the work of one’s hands seems almost inevitable. C. S. Lewis’ poem, “In Praise of Solid People,” put that tension into words, as he struggled mightily between the call of the mind and the call of the body. When he wrote this poem, he was not yet a Christian. It appeared in his first published book, Spirits in Bondage, published on March 20, 1919, when he was a young atheist, a “convert” from his earlier nominal Christianity.[2] In his autobiography, Surprised by Joy (1955) he dates his conversion back to Christianity in 1929, summarizing the high point in this vivid quote:

You must picture me alone in that room at Magdalen, night after night, feeling, whenever my mind lifted even for a second from my work, the steady unrelenting approach of Him whom I so earnestly desired not to meet. That which I greatly feared had at last come upon me. In the Trinity Term of 1929 I gave in, and admitted that God was God, and knelt and prayed: perhaps, that night, the most dejected and reluctant convert in all England.[3]

But that return to faith was still at least a decade away. In his book, Spirits in Bondage, this poem was one of three under the general heading, “Hesitation.” In the words of Walter Hooper, Lewis wrote these poems “with admiration, and probably envy, of those things and people who seem untouched by the pessimism he feels.” Hooper describes this poem as “almost certainly one of his finest poems.”[4]

“In Praise of Solid People”

Thank God that there are solid folk

Who water flowers and roll the lawn,

And sit and sew and talk and smoke,

And snore all through the summer dawn.

Who pass untroubled nights and days

Rejoicing in each other’s praise,

Who feel the things that all men feel,

And think in well-worn grooves of thought,

Yet not unfaithful nor unkind,

Theirs is the sane and humble mind,

O happy people! I have seen

No verse yet written in your praise,

And, truth to tell, the time has been

I would have scorned your easy ways.

But now thro’ weariness and strife

I learn your worthiness indeed,

The world is better for such life

Too often have I sat alone

When the wet night falls heavily,

And fretting winds around me moan,

And homeless longing vexes me

For lore that I shall never know,

And visions none can hope to see,

Till brooding works upon me so

A childish fear steals over me.

I look around the empty room,

The clock still ticking in its place,

And all else silent as the tomb,

Till suddenly, I think, a face

Grows from the darkness just beside.

I turn, and lo! it fades away,

And soon another phantom tide

Of shifting dreams begins to play,

And dusky galleys past me sail,

Full freighted on a faerie sea;

I hear the silken merchants hail

Across the ringing waves to me

– Then suddenly, again, the room,

Familiar books about me piled,

And I alone amid the gloom,

By one more mocking dream beguiled.

And still no nearer to the Light,

And still no further from myself,

Alone and lost in clinging night

– (The clock’s still ticking on the shelf).

Then do I envy solid folk

Who sit of evenings by the fire,

After their work and doze and smoke,

And are not fretted by desire.

The Christian C. S. Lewis saw the world of work in a much different light. It may be helpful for “stout, suburban people” to experience their work as a kind of sedative to shield them from painful experiences. But the believer has the privilege of seeing meaningful work as one of God’s gifts. The words of Ecclesiastes are to the point: “It is God’s gift that all should eat and drink and take pleasure in all their toil” (Eccl. 3:13, NRSV).

Photo by Museums Victoria on Unsplash