Revelation’s Trumpets: The Devil is in the Details 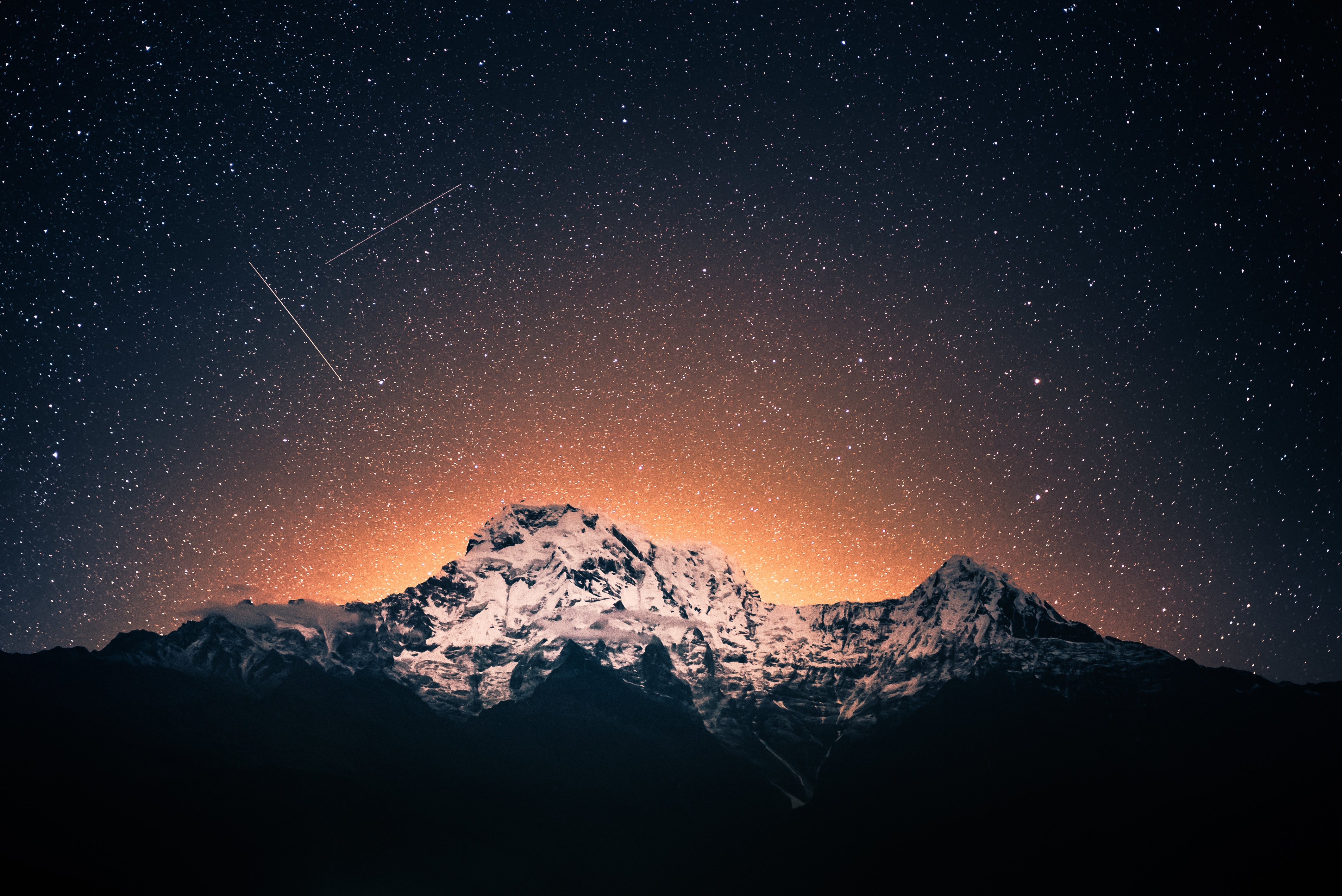 When we get to the trumpets (Revelation 8:2–11:19), interpreters offer starkly different choices. There is a fork in the road — a time to choose. One option commands wide scholarly support. The other option has less support and is the road less traveled. But as it says in Robert Frost’s poem,

I shall be telling this with a sigh

Two roads diverged in a wood, and I—

I took the one less traveled by,

And that has made all the difference.

Before I mention the options, I recommend the road less traveled. I promise no less in the context of Revelation than Frost does in his poem: to take the one less traveled by will make all the difference.

The first option — the road most traveled — sees in the trumpets a message of retribution. Scholars committed to this view are too numerous to count, but I will give a few examples.

The terrors about to intensify upon the earth are not caused by independent powers of which Christians need to be afraid nor which they might attempt to placate. All proceeds ultimately from the sovereign hand of the one God (Eugene Boring).

The narrative of the punishments unleashed with the blowing of each successive trumpet (8:1–9:21 and 11:15-18)…is an eschatological application of the ten plagues inflicted on Egypt by God (Exodus 7-12) (David Aune).

Although the people of the earth afflicted by the seven trumpet plagues reportedly do not repent (9:20-21), the purpose of the plagues is not to elicit repentance but to exact punishment (David Aune).

The exodus plagues are both a literary and a theological model for the trumpets. Therefore, the trumpet plagues are better viewed primarily as actual judgments on the majority of earth’s inhabitants, though secondarily they are warnings for only a remnant (Greg Beale).

But if the theology of the exodus plagues has been formative for the composition of the trumpets, then the trumpets must ultimately be understood as punishments that further harden the majority of people (Greg Beale).

The purpose of the first four trumpet judgments is primarily to disprove the earthly gods and to show that Yahweh alone is on the throne. By recapitulating the Egyptian plagues, God wants to make his omnipotence known to the world and to show the futility of turning against him (Grant R. Osborne).

The logic of this view runs roughly like this: The martyrs under the altar find God in arrears with respect to holding the world accountable (Revelation 6:9-11). They pray for action. God hears their prayers (8:2-6). God’s answer is the trumpet plagues (8:7-9:21). Given that the trumpets seem to recapitulate the plagues of Egypt, they have the same theology. Don’t mess with God! There will be retribution! Lex talionis!

Despite massive support for this view, there are caveats small and great. Among the small caveats are these:

1. The trumpets need not be a response to the prayer of the martyrs because they received an answer in the fifth seal. “They were each given a white robe and told to rest a little longer, until the number would be complete both of their fellow servants and of their brothers and sisters, who were soon to be killed as they themselves had been killed” (6:11). Here, victimhood is the prescription for the believer, not a promise of retribution.

2. Beware of the pitfall of “parallelomania.” Many years ago, the Jewish New Testament scholar (and SBL president) Samuel Sandmel warned against this problem. This is a “disease” that emphasizes similarities but overlooks the differences. In the trumpets, there are similarities to Exodus and Deuteronomy, but there are also dis-similarities. In the words of Craig Koester,

the content of the trumpet visions differs significantly from the exodus tradition. The focus of the first trumpet vision is fire rather than hail, as in Exodus, and it includes the new element of blood from the sky. At the second trumpet an object like a flaming mountain falls from heaven and turns a third of the seawater to blood. At the third trumpet another star falls and turns the rivers and springs to wormwood. By way of contrast, the exodus narrative says nothing about stars falling; it tells of the Nile rather than the sea turning to blood; and it says nothing about wormwood (Koester, 2014).

4. To do this, it is necessary to sequester the words of the earthly Jesus in response to his followers when the villagers in Samaria “rejected the gospel.”

When his disciples James and John saw it, they said, ‘Lord, do you want us to command fire to come down from heaven and consume them?’ [cf. first trumpet] But he turned and rebuked them (Luke 9:54-55).

And now to the massive caveats against the view that the trumpets depict retribution with God as the acting subject. Let us begin with the fifth trumpet (Revelation 9:1-11).

And the fifth angel blew his trumpet,

and I saw a star

from heaven to earth,

and he was given the key

of the bottomless pit;

of the bottomless pit,

and from the shaft rose smoke

of a great furnace,

and the sun and the air

1. There is more than passing likeness between this text and the story of the fall of “the Shining One” in Isaiah (Isaiah 14:12-20). Conversely, there is nothing like it in Exodus or Deuteronomy. The key elements in Isaiah’s poem are all here, a fall from heaven to earth to “the bottomless pit” (“the hell-hole”). Revelation gives a bullet point account of the Adversary in the cosmic conflict. It is hardly a coincidence that this is the preoccupation in the rest of the trumpet sequence (9:1-21). We are in a cosmic theater, and we should brace for a cosmic perspective. 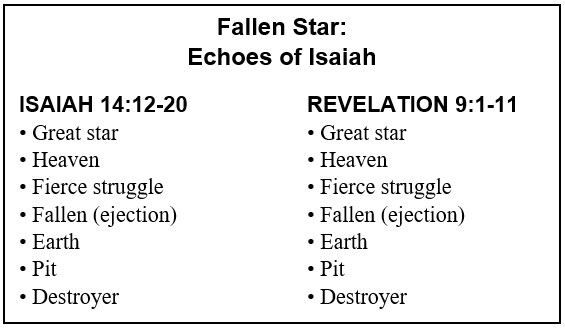 2. For the re-reader of Revelation, the trumpets’ monotonous “thirds” have explanatory power not only with respect to quantity but also with respect to agency. First, note the repetitive “thirds.”

An arithmetic, ho-hum reading takes the “third” to be a marker of quantity even though some “thirds” become absurd. But the re-reader remembers the primordial struggle; he or she remembers how the Dragon’s tail “swept down a third of the stars of heaven and threw them to the earth” (12:4). Of all the “thirds” in Revelation, the most important third is here (12:4). The “thirds” are by this criterion a marker of agency. Nothing is now absurd because the Adversary in the cosmic conflict has blighted everything.

Second, Revelation piles on bizarre details downstream from the fall of the star. The darkness arising “from the shaft of the bottomless pit” materializes into locusts and then into scorpions and then into horses! “Scorpions” have tails, but “they,” meaning the horses, “have tails like scorpions, with stingers, and in their tails is their power to harm people for five months” (9:10)! The sixth trumpet continues this bizarre exposé, adding heads to the tails of the horses! Has John gone mad? To some readers, he has, but re-readers will be at full alert. “For the power of the horses is in their mouths and in their tails; their tails are like serpents, having heads; and with them they inflict harm” (9:19). What leaps of imagery! And yet what consistency! “His tail swept down a third of the stars of heaven and threw them to the earth,” John says of the primordial scene (12:4).

3. What do we have in the fifth and sixth trumpet? We have a composite of “smoke,” “locusts,” “scorpions,” and “horses” (9:1-11). It gets worse: the figure has a “human face”; it has “women’s hair”; it has “lions’ teeth”; it has “iron breastplates”; and it has “wings.” We will not find this horse in the nearest zoo! These “horses” have “heads” at both ends, in the front, where there should be one, and “in their tails,” normally not a body part where a head would be expected. “Their tails,” in turn, “are like serpents,” “heads” and “mouths” and all. Like serpents!

The verbal jolt is high voltage. The dots connect to the serpent in Genesis (Genesis 3:1) by way of “the Ancient Serpent” in Revelation (12:9; 20:2). The antagonist in the cosmic conflict may breathe “fire and smoke and sulfur”; he may show chameleon characteristics — “locusts” one day, “scorpions” another day, and “horses” the third day. But he never lets go of his core identity. The sting of the serpent is related to its mouth, and the poison spewing forth is not snake venom but words (Genesis 3:1).

Do you trust me to tell you what John has just described? I can’t say it out loud for fear of offending sensitive souls. But if you lean over, I will whisper it in your left ear: he has described a demonic reality. If you let me, I’ll whisper another secret in your right ear: he has said that there is a demonic, non-human force at large in the world. Interpreters like to make these symbols into recognizable historical phenomena, but the effort is usually unimpressive and sometimes quite embarrassing.

John’s imagery resists the trivialization that interpreters force upon them. They tell the story of a cosmic problem, beginning with the star that fell from heaven to earth (8:10; 9:1). Requisite respect for the imagery allows the perpetrator of horror to remain himself. “When compared with the Seals that precede, and the Bowls that follow, the four Trumpets are colorless and weak repetitions,” said R. H. Charles. I think he is too severe, but I will describe John’s pedagogy this way: If we have not seen what Satan looks like, John shows him to us in Revelation’s trumpets. Here, literally, the Devil is in the details.

4. The identity of the power that wreaks havoc in the world is named in John’s kindergarten pedagogy. “They have as king over them the angel of the bottomless pit; his name in Hebrew is Abaddon, and in Greek he has the name Apollyon” (9:11). This is no “Life-giver” or “Light-giver,” although he poses as both. In English, his name means “Destroyer” (Revelation 9:11; cf. Isaiah 14:20).

What shall we call what has now been described? We shall not call it scenes of retribution. We ought to call it by the name handed to us in this book: revelation. This is the road less traveled in the trumpet sequence. And the fork in the road can now be illustrated like this: 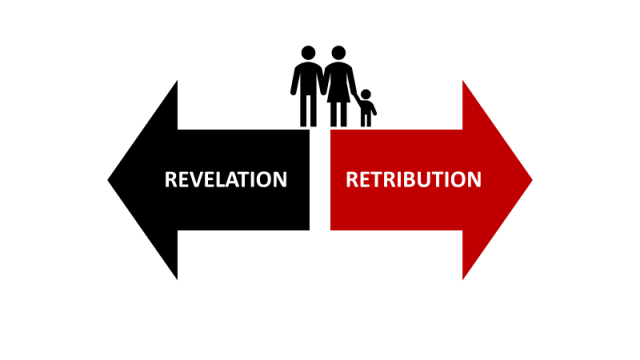 So much is at stake that I will push the point a step further. A theology of retribution fails to do justice to the cosmic problem that is the concern of Revelation. It collapses the action in the trumpet sequence into single agency: God is the acting subject. “All proceeds ultimately from the sovereign hand of the one God” (Boring). If this scenario is incorrect — and widely off target, as I believe it to be — we risk sending the bills for the world’s horrors to the wrong address.

Main photo by Arto Marttinen on Unsplash. In-line images courtesy of the author.