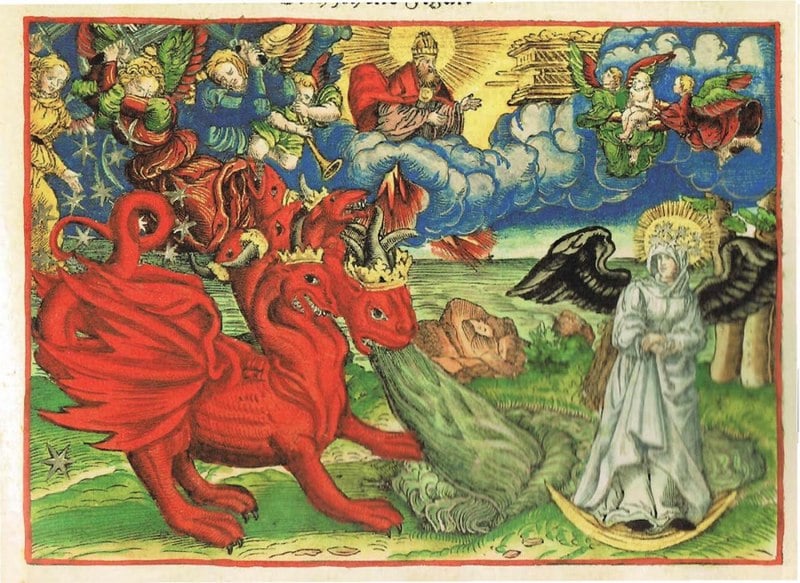 In a wonderful little book entitled Tales of the End, David Barr has a striking description of what happens in Revelation 13. “One of the most shocking things about this third story is that God is no longer the main actor,” he says. A power that is not God takes center stage, and it is almost as though God retreats to the sideline. “The dragon acts and God reacts,” Barr notes. “This is the dragon’s story.”

When I first came across this statement, I found it perceptive and well put. I still do. Not until now has it occurred to me that we ought to improve it. Now that the thought has taken hold, the last sentence needs just one more word to be improved. Let me repeat Barr’s most striking sentence with my proposed upgrade. It will now read like this: “This is also the dragon’s story.”

As you can see, I have inserted the word “also.” We will achieve the same effect by writing, “This, too, is the dragon’s story.”

I have high hopes for the proposed improvement. I wish to repeat it, now in capital letters, italicized, as an exclamation, THIS IS ALSO THE DRAGON’S STORY!

I would like to see and hear the sentence repeated in all parts of the world, from sea to shining sea in the United States, from the North Pole to the South Pole, by a multitude that no one can number, “This is also the dragon’s story!”

We find it in plain sight, in the seven trumpets (Revelation 8:6–11:19). A suitable headline for the trumpet sequence would be the same as Barr’s characterization of Revelation 13. “The Dragon’s Story.” Where else do we find it? Try the seven seals. If we were to give a title to the seven seals (6:1-17), we would not need to feel embarrassed if we gave it the title, “The Dragon’s Story.”

David Barr says that in Revelation 13 (and chapters 12–14, by extension), “the dragon acts and God reacts.” This works for the seven seals and the seven trumpets, as well, in this way.

We shall miss much if we do not see the pattern of action and reaction in the chapters we are now studying. But this brings a corollary that may come as a surprise: We have missed much if we did not see the pattern in demonic action and divine revelation in the seals and the trumpets (6:1-17; 8:7–9:21) or its counterpart, demonic action (6:1-17; 8:7–9:21) and divine reaction (7:1-17; 10:1–11:19). We’d better not make that mistake in the chapters we are now studying!

If the dragon had a horse in Revelation 13, which color would it be? There are horses aplenty earlier in the story but none in Revelation 13. My question is therefore meant tongue-in-cheek. In this chapter, we have a beast from the sea (13:1-10) and a beast coming up from the earth (13:11-18). The beast from the sea looks like a composite of the four beasts in Daniel 7 (Revelation 13:1-2; Daniel 7:1-8). Its composite character suggests a phenomenon that is similar to, but also larger than, the beasts in Daniel. But it is a look-alike in a way that is even more important: if we met it in the street, it would be difficult to tell the difference between the Dragon and the sea beast.

Then another portent appeared in heaven: a great red dragon, with seven heads and ten horns, and seven diadems on his heads (Revelation 12:3).

And I saw a beast rising out of the sea, having ten horns and seven heads; and on its horns were ten diadems, and on its heads were blasphemous names (13:1).

Jesus appeared in the middle of the heavenly council like “a lamb...killed with violence [hōs esphagmenon]” (5:6).

The beast from the sea appears “as if violently killed [hōs esphagmenēn eis thanaton]” (13:3).

This look-alike-ness, if that is what we have, is astounding. Somehow, in the story of the sea beast, is embedded the element in the story of the Lamb that is most distinctive! An identity-theft is in the making. The Dragon seeks not only to appropriate the identity of the Lamb in general (cf. 13:11) but the element in the Lamb’s story on which rests the reason for triumph in the cosmic conflict (5:5-6). It is preposterous to think that the Dragon is doing this in good faith; it is a bad-faith aspiration. He must neutralize the impact of the Lamb on the point that matters the most.

Before we continue, we need a word about other interpretations. Most scholars of Revelation believe that the beast from the sea is the Roman empire. The wounded head is the emperor Nero. The healing of the wounded head refers to the myth of Nero’s return. There was such a myth in the ancient world, and the most influential Revelation scholars are convinced that the Nero-myth underlies the story of the sea beast in Revelation. More than one hundred years ago, the great Wilhelm Bousset declared this interpretation so certain that all attempts to undo it have been “dashed to pieces.” And the beast from the earth? In the same scholarly circles, the beast from the earth is the imperial cult in Asia Minor.

By this logic, the story in Revelation 13 is a parody of the Roman Empire and its claim to divine honors.

Wilhelm Bousset and many others notwithstanding, I think their interpretation falls woefully short of the force of Revelation’s symbols. The beast from the sea is not a parody of the Lamb although a likeness between Jesus and the Roman Empire would only work at the level of parody. (In my TIMEOUT later this week I will spell out more fully what this might mean in contemporary terms). If it is not parody, what is it? It is an imitation, a credible and successful imitation (13:3-8). Scholars not in my own faith community who think that we need to think in terms of imitation are a minority, but their work is priceless (Minear, Rissi, Beale).

Nero’s foot is too small to fit the shoe of Revelation’s metaphors. But the same may to some extent be said about other candidates that have been suggested for the dubious honor of being the beast from the sea. While look-alike-ness to the Lamb is a key element in the Dragon’s strategy, the look-alike-ness of the beast to the Dragon is just as important. We must not lose sight of the Dragon in the story in our eagerness to pin the tail on the pig in historical terms. Profound ideological continuity at a cosmic level is evident when Revelation says that the beast representing the Dragon was full of “slanderous names” (13:1), that it had “a mouth speaking exceedingly big words and slander” (13:5), and that “it opened its mouth to slander (i.e. misrepresent) God, slandering God’s name and God’s dwelling” (13:6).

The result of the Dragon’s Plan B is impressive, and now we are back to my question about the color of the Dragon’s horse. John says that the beast from the sea “was permitted to make war on the saints and to win over them [nikēsai autous]” (13:7). This language is strikingly similar to what he says about the rider of the first horse in the seal sequence (6:1-2). We recall that the first rider “set out conquering with the intent of winning the war [nikōn kai hina nikēsē]” (6:2). Those who believe that the first horse self-evidently represents Christ and the gospel commission — mostly because of the white horse — may have to think again. The language that is in Revelation 13 tracks closely language used for the first horse and its rider in the seal sequence. Another option ought to be considered for exegetical, narrative, and plot consistency. In Revelation 13, the Dragon tries to steal the identity of Jesus. In the seal sequence, he steals his horse (also with the aim of stealing his identity), just as Jesus describes it in the Synoptic Apocalypse. I have said more about this in my forthcoming commentary; I say no more here.

Above, I quoted David Barr to the effect that in this chapter, “the dragon acts and God reacts.” God’s re-action will come in the next chapter, well known to many readers as “the three angels” messages’ (14:6-17). But there has been re-action on God’s part already, or pre-action, in the intermission between the sixth and the seventh seal (7:1-17) and the intermission between the sixth and the seventh trumpet (10:1–11:19). A re-action is suggested here, too, in a statement about the believing community in the context of “the dragon’s story.” “If anyone (is to go) into captivity, into captivity he or she will go; if anyone is to be killed with the sword, with the sword he or she will be killed” (13:10). This is how witness and discipleship are represented in Revelation. Once more, as for the two witnesses earlier in the book (11:3-13), the story of the Lamb is embodied in the witnessing community (5:6; 13:8). It cannot be said too strongly that the lines of demarcation between the true and the false are timeless theological affirmations, not only historical predictions. At no time will there be a break or a pause from what happens in the witnessing community in this regard. At no time will there be another story than the story of “the Lamb...that was killed with violence” (5:6; 13:8) and thus won the war depicted in this book.

Revelation’s Trumpets: The Devil is in the Details, February 11, 2019

Timeout: Disarray and Trivia in the Trumpets, February 14, 2019