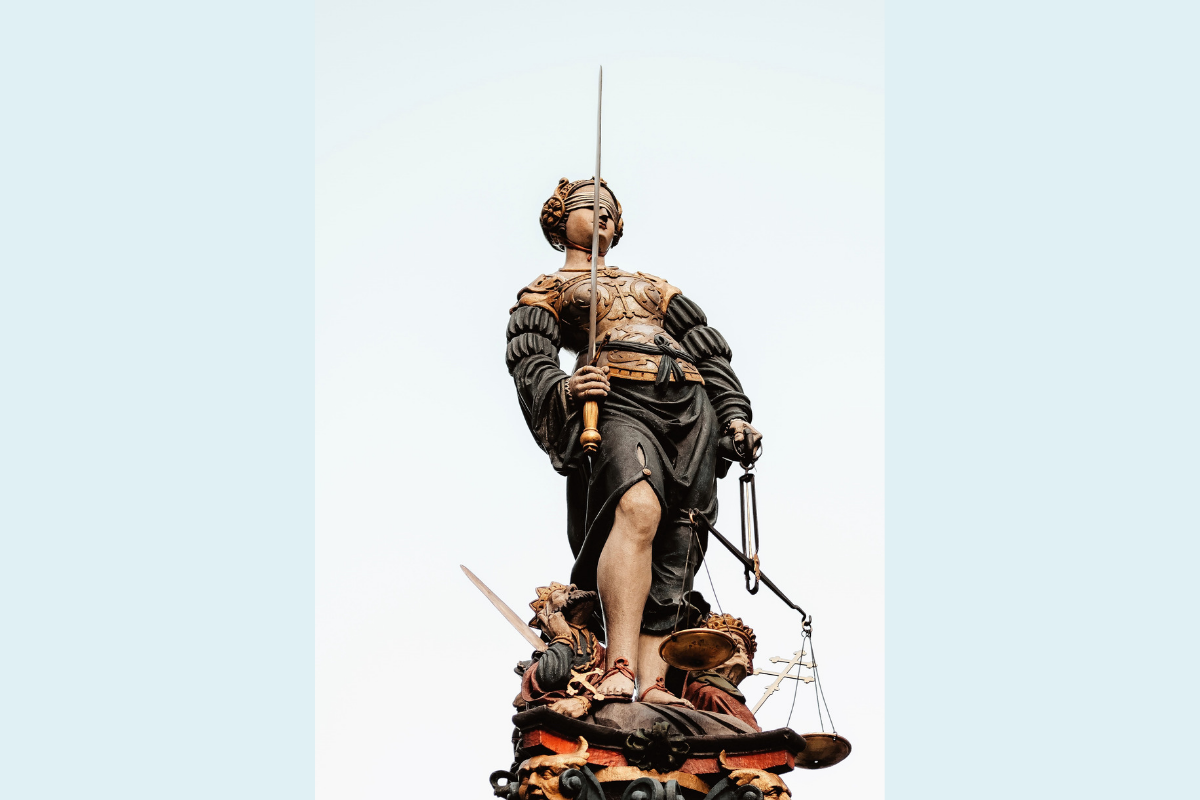 “I want justice!” She said and she slammed her closed fist on my desk.  This is what I heard from one of the first clients I had as a lawyer. Older attorneys in my office heard her outburst and pulled me aside.  They warned me to think carefully before taking her case, to examine what she meant by “justice.0”  They knew I was inexperienced and wanted to fix the world’s problems and right every wrong.

Hearing their warnings was the first time I really thought about what justice meant and how we each have a different definition of what is, and what it means to be just.  Our definition of justice is often self-centered and focused on correcting what we see as something that was done to us unfairly.  It is often a way to strive for some benefit for ourselves, disguised as fairness.  But our interpretation of justice leaves out the person on the other end. It only encompasses half the story. We seek “justice” and fail to balance that search for rightness and equality with mercy.

I did not listen to the attorneys in my office when they warned me about my potential client. Instead, I rushed in, sure that I had the law on my side and could provide her with what she needed—fairness—my interpretation of justice.  What I learned was that my client’s definition of justice was not the same as mine.  Her version of justice was not about becoming whole or gracefully accepting a compromise that would restore what she had lost.  For her, justice meant proving she was right, at the expense of someone else’s dignity. It was a way to get revenge.

In the books of Psalms and Proverbs, the writers have a specific interpretation of justice, one that focuses not on gaining an advantage but giving an advantage to those who are often overlooked, those who are vulnerable, and those who may be considered less than or worthless.  Psalm 82 emphasizes taking care of the poor, the fatherless and widows.  These are what are referred to as vulnerable populations—those that are at risk because of their socio-economic status, their race, gender, ethnicity, etc.  The message repeated throughout Psalms and Proverbs is to help the vulnerable.

Justice also means righteousness and walking in right relationship with Christ. For the readers of the Psalms and Proverbs, persons who were oppressed were given hope through the promise of judgment and restoration.  Christ’s coming represented restoration.  They were also given a practical and immediate reference that those in positions of power should help those who were vulnerable.  It was a way for people then, and people now, to model the will of Christ and to restore broken relationships.

One of the key questions to ask when parsing through whether an action is just, is spelled out in Isaiah 1:17, “What does the Lord require of you but to do justice, and to love kindness, and to walk humbly with your God”.  So, what does the Lord require of you? Is it to be right? To have the upper hand? Is it to use your position, power, influence, or resources as a weapon? That seems to be the opposite of what is presented in Psalms, Proverbs and Isaiah.  Justice, in the instances described, requires balance.  It requires looking beyond your self-interest.

Throughout the time I practiced I law I heard people demand “justice.” Very few of the people who truly needed my help felt they deserved it, because they were told or shown, repeatedly, that they were not worthy. They didn’t have the money, they didn’t have the power or the social standing.  When I was able to set aside my own need to win and to prove I was the best, I became a better advocate and I was able to do what they couldn’t ask me for; provide an avenue for each person I represented to find a sense of value and worth.  In those instances, I was able to do what the Lord required of me, in loving kindness.