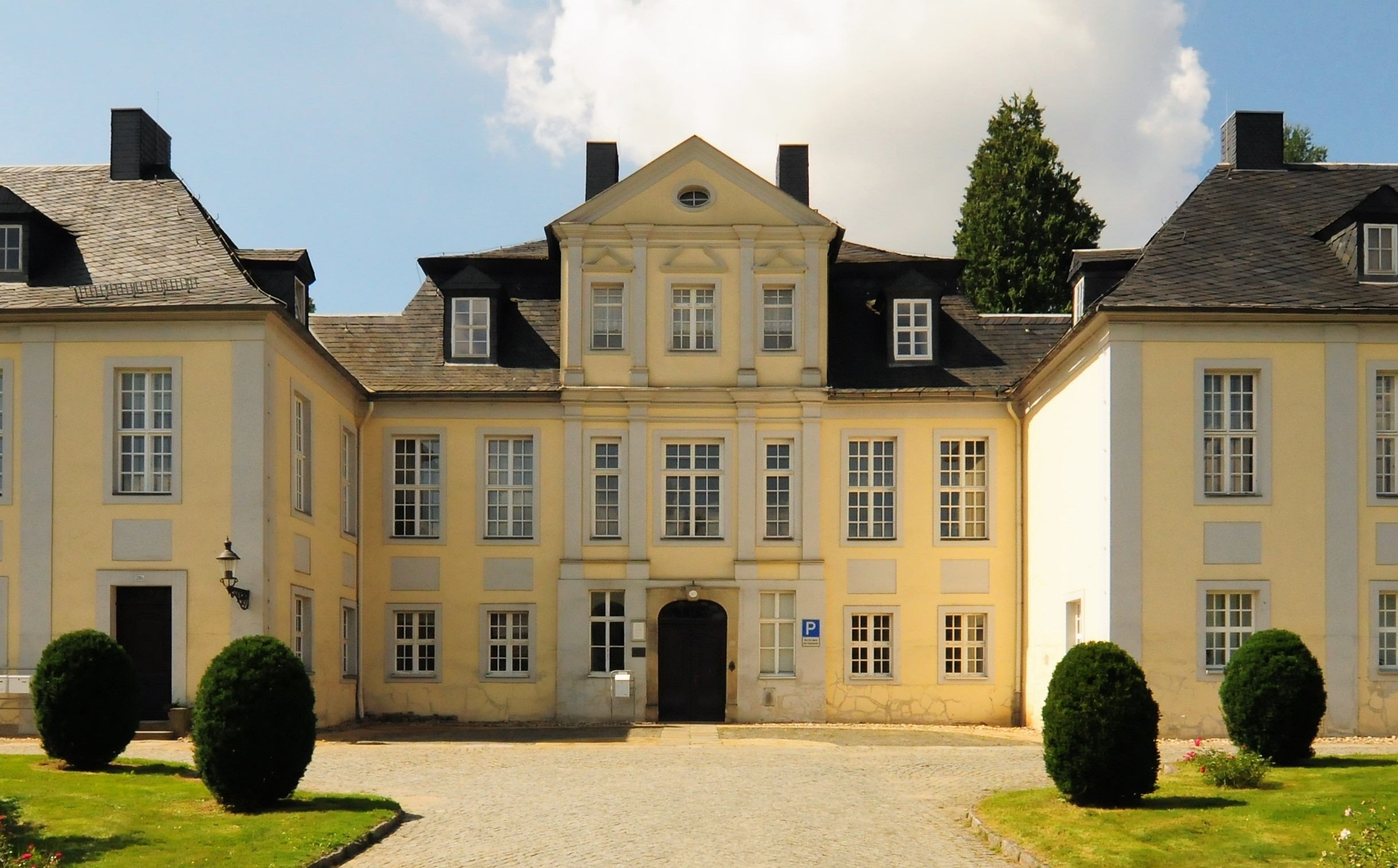 When presented with this week’s Sabbath School topic, my thoughts first turned to the reformation movement called Unity of the Brethren (Unitas Fratrum), also known as the Moravian Church.  It is one of the oldest Protestant denominations in the world, with its heritage dating back to the Bohemian Reformation in the fifteenth century, in the Kingdom of Bohemia (known as the Czech Republic today). Even after two hundred years of heavy persecution, this movement (which became known as the “renewed Unity of the Brethren”) was still on its feet in a village known as Herrnhut; this Christian community was a  remarkable experiment, as well as a major catalyst, for Protestant missions. You may be familiar with the testimony John Wesley gave about the amazing spirit of these people (E. G. White, The Great Controversy, 255).

What you may not know is the more recent history of this denomination. Not too far from Herrnhut is Unity’s largest church in the region. After the fall of Communism in the Czech Republic, this church grew by hundreds of people, and new churches were planted in surrounding villages and towns. However, at the same time, tension grew from within the church with regard to both the direction of the denomination as a whole, and the denomination’s teachings; some thought the tension was something that would pass, but the rift grew.

A radical branch of leaders emerged as the root of this division; they were not merely charismatic, but perpetuated intolerance and totality. This branch became the stronger wing of church leadership, and eventually took over the denomination, pushing the other wing out. Sadly, the new charismatic Unity of the Brethren in the Czech Republic has never fully recovered from this dissection, and has repeatedly been a seat of division as new groups of believers have broken off and left [To all congregations of the Unity of Brethren – a Czech text].

One might question if there was a way to keep Unity from losing its oneness. How can a church organization function in such a way as to prevent painful splitting and a divisive spirit? Are there any conditions that justify dividing God’s church? In what ways is the organization of the church helpful, and in what ways can it be harmful to the unity for which Jesus prayed in His final hours before death (John 17)?

The key text in this week’s lesson guide is found in Matthew 20:26, 27. In this story, the mother of James and John approaches Jesus, attempting to secure her sons a place of honor in Jesus’ coming kingdom. Yet the other disciples were indignant. They were also disciples of the King! It’s no wonder they wanted a place of honor in His kingdom, too.

Jesus used this opportunity to teach one of the most important lessons a disciple can learn; He taught them how to be good leaders, not only humanly speaking, but also from God’s perspective.

In your mind’s eye, can’t you just imagine Jesus gently saying: “So you want to be the center of attention? Do you want to get all of the honor for yourself? Do you want to rule above others? If you indeed strive for honor, here is the secret: true honor comes through shame—the shame of being the last one, the shame of the cross.”

By saying this, Jesus set the foundation for what is now called “servant leadership.” The concept of servant leadership has received a lot of attention in recent times—in both the secular world and the Christian world. However, it is not always clear for leaders what exactly it means to be a servant leader. Research shows that pastors who claim their leadership style is “serving” (as opposed to relational, people-oriented, team-based, and goal-oriented) generally have smaller, declining, and less healthy churches (ICM research 2017, 2018). It is clear that these leaders have “missed the mark,” if you will, on what being a true servant leader means.

With this in mind, consider the following table, which shows the typical patterns of organizations (including the church), as opposed to the patterns we find in the Scripture, represented by the Triune God. 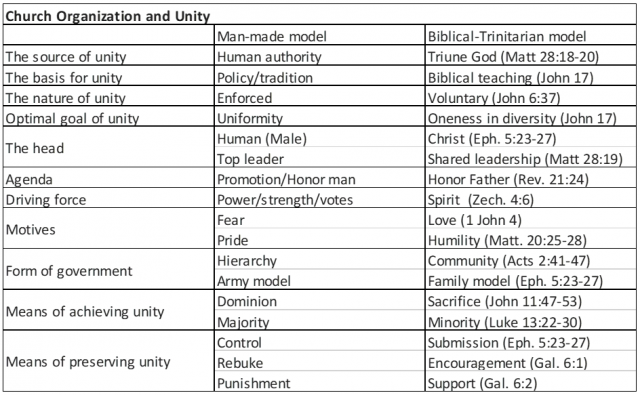 Interestingly, the Sabbath School lesson guide next brings our attention to Ephesians’ fifth chapter, where Paul talks about the unity of marriage and compares it to the relationship between Christ and the church. Marriage is clearly an establishment in which unity is crucial; to become one is the essence of marriage (Gen. 2:24). In our human condition, crises in marriage are common and almost inevitable. Such crises may be due to missing communication, an absence of collaboration, no sense of unity, and/or lack of mutual submission. However, when crises are solved, a marriage may be strengthened, bringing greater unity and harmony to the union. On the other hand, if there is ongoing coercion, pressure, and manipulation within a marriage, the marriage will show signs of unhealthy tension. Additionally, if these dysfunctional behaviors are accompanied by violence, abuse, or even infidelity in a marriage, outside expertise and help is needed. Unresolved crises within a marriage bring pain to all involved parties and many times lead to divorce.

Obviously, divorce and its consequences are not good for marriage. Similarly, removing leaders, conference(s), union(s), or division(s) from our church in the name of unity would not be good for our church organization. Similarly, the division of church offshoots (as seen in the opening example of the renewed Unity of Brethren) is damaging to the church, as well. Disharmony can hardly serve as a means to restoring unity. If Christ is the head of the church, then shouldn’t He and His church also be the source of unity?

The first-century church “was clearly countercultural just in terms of the love and unity it exemplified” (Pat Gustin in Ministry Magazine, 2000). Christians were known as those who were disciples of Jesus (John 13:35). Their unity was indeed the greatest witness to the power of the risen Christ. We can see from history and Scripture that while formal organizations can be extremely helpful, they can also be extremely harmful for unity.

There are lot of “little things” involved in church life, but one Spirit — a Spirit of humility and servitude — can make a big difference; this is true whether we are talking about leaders, teaching, ministries, or mission. True unity in Christ cannot be implemented without His presence and guidance. Additionally, unity cannot be instituted at the cost of violating our conscience. When unity is maintained through use of totalitarian and authoritarian power (as seen in the examples of Unity), it won’t last long. If true unity is to be implemented, we must follow the example of the Triune God (see the Biblical-Trinitarian model in the table above); the greatest of us must be willing to be the least. Following the model of the Godhead leadership, the church will inevitably have shared leadership, which is relational rather than hierarchical, complementary rather than competing, mutually submissive and yet equal, thus demonstrating unity in being, will, and work.

• Point members to the Godhead as the ultimate source of life, love, and unity?

• Help the church members to experience God in their heart?

• Strengthen the fellowship (loving community) of the believers?

• Equip the believers to serve the world (to fulfill its mission)?

• Nurture faithfulness of those who belong?

• Foster fruitfulness in church ministry on all levels?

Now I challenge you to consider your own place in the unified body of Christ. Many times, it is easy to look to church leadership and expect that cohesion will start at the top and trickle down. However, unity is the duty and responsibility of every member of the Body of Christ. What can you — personally — do to enhance the unity of your local church?

Some food for thought.

Petr Činčala is Assistant Professor of World Mission and Director of the Institute of Church Ministry at the Seventh-day Adventist Seminary, Andrews University, Michigan.

Photo Vogtshof Herrnhut, seat of the Moravian Church, by Lysippos on Wikimedia Commons