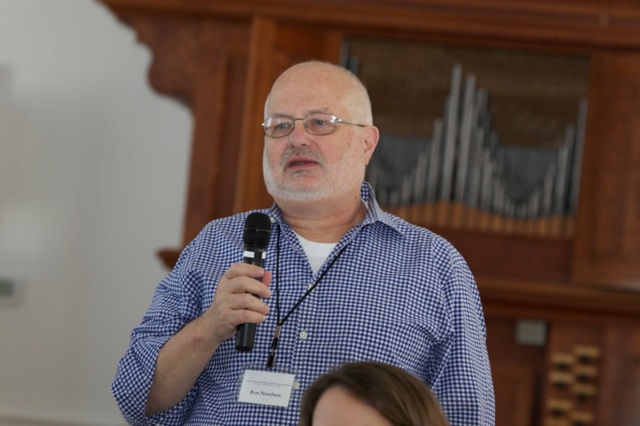 With a warm welcome, the tall, casually dressed Pastor Brent Coupland stepped to the lower stage in what is called the most beautiful building in Florida and gave a brief history of the Presbyterian church in Tallahassee where the conference honoring Ronald L. Numbers

was held from February 15 to 16, 2013.  This church is the oldest public building in continuous use in Florida.  By selling pews to congregates it was built from heart pine without nails. During Native American uprisings the women and children took refuge in the basement of the church with the men defending their families through rifle slots built into the walls. From the beginning slaves were allowed to attend church. During the Civil War the bell was offered to the Confederacy to be melted down for cannons, but was refused. The bell is still used to call worshipers on Sunday morning. To begin the conference, Pastor Coupland introduced his "favorite agnostic," Michael Ruse, FRSC, a philospher of science, who welcomed the participants and announced the proceedings.

The conference held in this simple attractive church was titled "Science without God: Religion, Naturalism and Sciences, A Conference to Honour Ronald L. Numbers." Ron Numbers, a graduate from Southern Missionary College, now called Southern Adventist University, once taught at Andrews University and Loma Linda Medical School, and is considered by fellow historians as the greatest living expert on American creationism. Numbers recently retired after nearly 40 years of at the University of Wisconsin, having served at various times as president of the History of Science Society, the American Society of Church History, and the International Union of History and Philosophy of Science.

More than 60 professional historians and friends of Ron Numbers attended during the two-day conference with papers exploring the growth of so-called "methodological naturalism" in science, which prohibits any appeal to supernatural explanations but leaves scientists free to believe whatever they want about the reality of God. NaturalIsm does not deny the existence of God. The scope of science is limited to explanation of empirical phenomena without reference to forces, powers, or influences that are supernatural. During the conference there was a brief summary of each paper by a presenter, a commentator offered suggestions for improving the paper, followed by audience participation. A book based on the conference has been solicited by the University of Chicago Press. Presenters came from such far away places as Turkey, Israel, Greece, Great Britain, Australia, New Zealand, and Canada. Among the participants were Terrie Aamodt, Jonathan Butler, and Rennie Schoepflin. A number of the participants, including Schoepflin, were current or former students of Ron's. 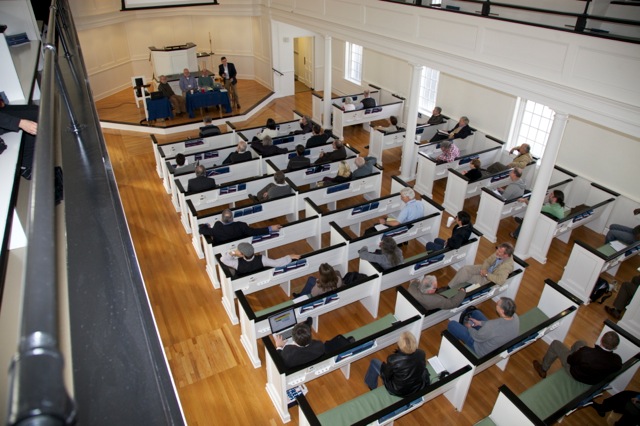 Launching the conference was the question, "What was the relationship between naturalism and religion among the Greeks and Romans?" Subsequent papers dealt  with the Middle Ages and early modern natural philosophy, as well as with such diverse disciplines as astronomy, physics, chemistry, geology, medicine, anthropology, biology, psychology, the social sciences, and biblical studies. Surprisingly, in most cases the impetus to adopt methodological naturalism came from devout Christians, not skeptics or unbelievers. This arrangement made it possible for practitioners of all stripes to work harmoniously in the scientific vineyard, though disputes occasionally erupted.

Many expressed their appreciation to Ron for his genuine promotion of their careers and intellectual interactions as editor, conference organizer for such books as When Science and Christianity Meet, Science and Religion Around the World, Galileo Goes to Jail and Other Myths About Science and Religion, God and Nature, Caring and Curing, and Disseminating Darwinism. Ron is best known for Prophetess of Heath: A Study of Ellen G. White, and The Creationists: From Scientific Creationism to Intelligent Design. Under consideration by Oxford Press is a new book edited by Terry Aamodt, Gary Land and Ron Numbers titled, Ellen Harmon White: An American Prophet. Now in retirement Ron is researching and writing a biography of John Harvey Kellogg.

The conference was financially sponsored by The Historical Society, the Department of Medical History and Bioethics at the University of Wisconsin-Madison, and Florida State University, where in 1964 Ron first discovered the history of science.

This link provides a list of presenters, commentators and topics.

—T. Joe Willey, received his Ph.D. in neuroscience from the University of California, Berkeley and taught at Loma Linda Medical School, Walla Walla University and La Sierra University. He was a fellow with Nobel Laureate Sir John Eccles at the University of New York, Buffalo, and research fellow at the Brain Research Institute at UCLA, Los Angeles.