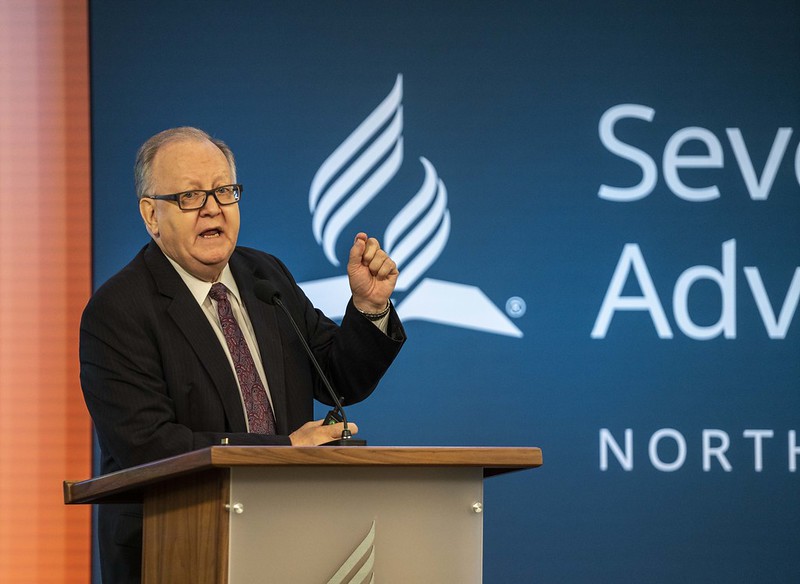 Earlier today, the North American Division (NAD) reported that Daniel Jackson, its former president, passed away from health complications. Dan, as many Adventists called him, led the Seventh-day Adventist denomination in Canada, the U.S., and Bermuda for about 10 years, from the summer of 2010 until he retired on July 1, 2020. During the NAD Year-end Meetings in 2019, Spectrum reported his retirement announcement:

"What an honor you all have given to me to serve you and to serve this Division. It has been a privilege for me and it will be a privilege that I will always cherish. . . . I want to thank you for that privilege," said Jackson, to a standing ovation from the audience, and a shout of "five more years!" from one delegate which elicited cheers and more applause. "I have a response to that, but I won't say it publicly," laughed Jackson.

Known for his friendly, informal manner in person, Jackson's speeches defending the NAD's reputation, especially over its support for the ordination of female pastors, often included evidence that he was speaking from his heart. During his final NAD Year-end Meeting, he said, "I hope no one in the world . . . will ever get the impression that the North American Division will somehow pull back on this idea of having women in ministry. Because we won't. . . . I hope I live long enough to see the day when we have 1,000 women pastors in the NAD."

Except for five years of service in the Southern Asia Division, Jackson, a Canadian by birth, worked as a pastor, teacher, and administrator in the NAD for his career. He held degrees from Canadian Union College (now Burman University) and Andrews University. Dan is survived by his wife Donna, three children, and four grandchildren.

In her report on Jackson's laughter-filled retirement party, Kimberly Luste Maran, associate director of communication for the NAD, wrote,

In addition to the division moving to its own headquarters in Columbia, Maryland, in 2017, record tithe came in annually during Jackson's tenure, almost 1,000 churches were planted; more than 300,000 people were baptized; the legacy Adventist media ministries (Breath of Life, Faith For Today, It Is Written and Escrito Está, Jesus 101, La Voz de la Esperanza, Lifetalk Radio, and the Voice of Prophecy) found their own homes and identities; the number of women working as pastors and chaplains doubled; the Adventist Learning Community, a robust digital ministry resource, was created; both the Young Adult Life initiative and Big Data + Social Media department came to fruition; and the division started the magazine Adventist Journey.

Although it will never be part of any official list of his accomplishments, Jackson became internet famous among Adventists for an off-the-cuff speech he delivered in 2018. Known as the "hooey speech," it followed a vote for tithe parity, thus reducing the amount of tithe sent by the NAD to the General Conference.

I will say from the perspective of serving as the president of this division for eight years, that I am very tired and probably angry at the way our division is looked at by the world. (Amens from the audience.) We are not rebels. We are Seventh-day Adventists (Amen). There is tremendous loyalty to the church in the North American Division. Once again, I would challenge—and I mean challenge—someone to find any of the divisions that are more loyal to the church, both in terms of policy and finances than the North American Division. I will not sit here and tell you what I know, because it would be embarrassing to the world church. But if we have two unions, or 49 women who have been ordained, these are small matters compared to some of the other matters that exist around the world (Applause).

I don't know where the discussions will go that we've just voted, but I will tell you, there had better be a spirit of reconciliation on the part of all. No condescension. No, we are not your students. We are colleagues together in ministry with our brethren from the General Conference. Period. It will be unacceptable to the three of us, as it is unacceptable to you, that you're looked down upon. It's just not acceptable. I will not tolerate it, and I mean that just as I say it. I will walk away so fast it will make anybody's head spin. This division has not only been the breadbasket, but it has been the source of human resources that have fanned and fueled mission and growth and development in the world church for decades. And I hope and pray it will continue to be. I hope and pray that we can come to an amicable resolution of the financial issue that is pregnant in this division. Because we don't live in the days (breaks into song) "The days of wine and roses." We don't live in that world anymore. We just don't.

I am not talking about—you know, people have different opinions—and I want the folks who think right now that I'm an absolute raving lunatic, to know I support your right to believe women should not be ordained. I support your right. You are a member of God's church. You are our brothers and sisters, and I'm not talking about that. I am talking about words entrenched in policies that beg credulity. You can't tell people today, "We love everybody, and everybody can do everything, except those positions that require. . ." Get that policy out of there. Just come out and say, "We do not believe in ordination of women. Period." That's all you have to say. But that nonsense, that hooey (Applause), in the B60 policy that allows us to put a noose around the neck of women is garbage ("Hooeys" from the Audience). It's a good word. Don't say three times, "We love everybody, and everybody's acceptable, and you can do anything, except if there's an ordination requirement, and then come to the end of the policy and say all of these 'except' statements in parentheses do not apply—and do not apply them—to women who have been ordained as elders as it has been voted by the General Conference." I’m sorry it begs credulity.

There is more hooey—there is hooey in the male headship theology. It was never Seventh-day Adventist, it is not Seventh-day Adventist, and it is not going to become Seventh-day Adventist. So, here’s a story. My good secretary just said, “Calm down.” He’s a good man. You know, we will continue to pray that God’s spirit will lead the church, so that our women will not be held back or limited by glass ceilings that we have created to in order to protect our own positions (Applause).

Parts of the speech were remixed and set to a hip-hop beat by Maxwell Kozan. The end includes guitars playing “The Church Has One Foundation.”