How Wilson Was Elected: A Case Study for Reform For the first time during his General Conference presidency, the delegate vote on Ted Wilson’s election was counted and publicly displayed at the 2022 GC Session. As previously reported, 1,284 voted for Wilson, 431 against—a split of 74.9% to 25.1%.

But the Monday vote was closer in the GC Session Nominating Committee. Out of the 268 members, approximately 150 approved, while 90 opposed Wilson. That smaller 60% favorable vote by a very concentrated group of church leaders and laity occurred after an hours-long, at times “brutal” discussion of Wilson’s legacy. In defense of him, one member of the nominating committee stated Wilson is “the devil you know, not the devil you don’t know.”

Three members from the nominating committee, speaking on condition of anonymity as they are not authorized to speak publicly, shared direct quotes and details.

Others who were nominated and seriously considered included Pardon K. Mwansa, vice chancellor of Rusanagu University in Zambia, Artur A. Stele, GC vice president, and Erton C. Köhler, GC secretary. Concerns about Köhler focused on his limited experience beyond the Americas, his English language skills, and how an honorary PhD from Peruvian Union University was used in professional settings during his time as president of the South American Division. One criticism of the nominating committee process is that a person under consideration is not able to respond to publicly aired questions of fact.

Ultimately, it was mostly irrelevant.

Very early in the nominating committee process, before other names were discussed, Kathryn L. Proffitt, part of the General Conference delegate caucus, jumped up to the mic and made a motion to “elect” Ted Wilson. It was quickly seconded. There was a sense of being ambushed in the room, members of the nominating committee said. The nominating committee protocol hadn’t even been fully set up yet. Proffitt declined an appeal to change her motion to one for “nomination.” Instead, the immediate vote on Wilson was tabled (postponed temporarily), allowing for other names to be nominated and discussed. But as debate subsided after several hours, Proffitt’s motion was un-tabled. The secret vote was counted. Without individual votes for each of the other candidates, the 40% opposed to Ted Wilson was treated as a vote for the field. The other three names were never brought up for a vote on their own terms. Around 9 p.m., the nominating committee presented their first “partial report” to the delegates, just before the first day of the business session concluded.

An Ambassador in the Room

A former dental hygienist who made millions in the telecom industry, Kathryn Proffitt has become a frequent presence at General Conference Executive Committee meetings of late. Her name appears on the list of this session’s GC caucus in the 50-member Laypersons/Supporting Ministries section. A Republican who voted against President Bill Clinton in 1992, Proffitt was the national chair of Republicans for Clinton-Gore in 1996. She served as U.S. Ambassador to the Republic of Malta from 1997–2001. Proffitt later joined the La Sierra University board of trustees, where her son had been a student. She served until 2011, when her public attacks on the science faculty led to her removal. In a devotional she gave for the 2015 Annual Council meetings, Proffitt read from a letter of ambassadorial instruction from President Clinton: “Always keep in mind that for the government and the people of the Republic of Malta, you and your mission symbolize the United States of America and its values.” Comparing the U.S. and Malta, she then warned about the temptation that Adventists face as ambassadors for God to not conform to the culture of the world.

The Proffitt action kept the other names from getting their own vote. But the fact remains Ted Wilson was elected to serve until 2025 by the majority of the GC Session delegates. For a global denomination increasingly venturing out into the world during a pandemic, perhaps sticking with a known authority figure feels safer than making a change right now.

What Can Votes Tell Us?

The reality is also that Wilson’s 60% nominating committee vote was the second-closest margin out of the over 100 votes publicly measured during the session. Building the Adventist house upon the Wilson rock may feel wise, but cracks appeared all week on the delegate floor.

One of the most important issues to Wilson garnered major debate and the two next-closest votes: Ellen White. A motion implementing a new local church Spirit of Prophecy writings coordinator passed by 66.3%. But the narrowest concerned a proforma tradition since Ted Wilson became president in which a “Statement of Confidence in the Writings of Ellen G White” is presented for a vote at every GC Session. Amid the debate, a delegate who teaches at Andrews University, Anthony Bosman, proposed a slight change (see graphic: from top to the bottom paragraph). 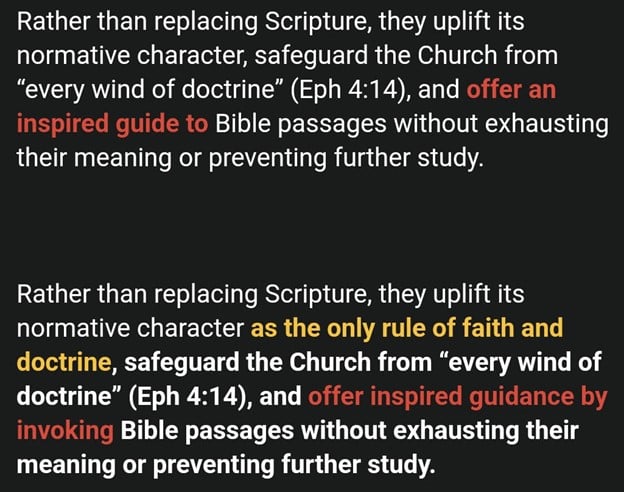 The motion to refer the item back to the committee to make this edit failed with 723 of the present delegates (58.8%) opposed.

Sharing his perspective on the experience, Bosman, who earned his BA in Mathematics from Stanford University and his PhD from Rice University, states, “I thought the statement was a good attempt to articulate our high regard for Ellen White's writings, but describing them as an ‘inspired guide to Bible passages’ may give the unintended impression that we treat White as a normative arbiter for our interpretive debates. Of course, Ellen White didn't see that as her role, and it is in tension with her view of Scripture as the only rule of faith. Unfortunately, since there wasn't time for the committee to clarify that language this session, my motion failed. But I believe that it engendered important discussion that I hope gets reflected in a clearer statement next session.”

Essentially every motion concerning the 12 changes to the GC Constitution and Bylaws and the 37 revisions to the Church Manual was ultimately approved, with only a few being sent back for minor language revisions before being returned to the floor. The same is true for the nominating committee partial reports in which slates of church officers are brought to a vote as a whole. Delegates must either vote on everyone or refer the entire group back. If a delegate has a concern, they can meet with the nominating committee chair/vice chair in a little square of black curtains near the platform, in which they share their objection. According to Lowell Cooper, a former GC vice president who served as the chair of this year’s nominating committee [he did not reveal any interior committee details]:

The purpose of this is to learn the nature of the concern that prompts the motion to refer. If the person brings substantial new information concerning a nominee that was not known or considered by the nominating committee, the chair would advise the floor that the motion to refer is in order. Otherwise, the chair would inform the floor that the nominating committee has already considered the concerns that lead to the referral motion.

Despite several expressions of concern by female delegates about age and gender diversity in the slates of church leaders, almost everything passed with around 90% approval. Of the 23 senior GC executive positions (three GC officers, seven general VPs, and 13 division presidents), only one is a woman.

Reformation Starts with the Nominating Committee

In light of what essentially is a multi-million-dollar rubber-stamping operation, an enormous amount of the GC Session is occupied by delegates making speeches driven by quickly triggered interpretations of a sentence or even a word missing or present. A motion on premarital counseling leads to several expressions of concern because the word “couple” is not defined as a man and a woman. A motion clarifying that an ordained elder doesn’t need to be ordained again when becoming a deaconess turns into a proxy war rearguing the themes of the 2015 GC Session debate on women’s ordination.

The inanity and inefficiency can sometimes seem so huge that a public discussion of it is almost impossible. Like a scene depicting control as freedom from a George Orwell novel or the dystopian Terry Gilliam film Brazil (1984), the onslaught of the bureaucratic and the theological could intertwine in inhumane ways. Except for meals and bathroom runs, delegates who arrived in time for the 8 a.m. worship spent over 13 hours in a covered football stadium ringed by five stories of 66,965 mostly empty seats while a black and white video logo of the Seventh-day Adventist Church faded in and out behind them.

A well-prepared nominating committee might even engage in a search process and select a possible president long before the session. This could allow the nominating committee to communicate its concerns to the president, possibly about matters of gender and age diversity as well as global representation. Cooper adds, “When the session convenes and presumably approves the nomination for president, the nominating committee should hold the president accountable for progress on the demographic issues or other concerns that have been identified and communicated.” The general success of this shortened session raises questions about the wisdom of returning to the traditional 10-day pattern for 2025. Perhaps a longer nominating committee but a shorter session might save resources and increase executive oversight and deliberation. Cooper continues, “I feel that the pressure to address so many leadership positions in a few days often defaults towards the recommendations brought by an elected leader. But if an early meeting (several months in advance of the session) takes place and it issues some expectations to the nominee for president, there is more opportunity to affect needed change rather than to rely on each individual nominee to think only about their personal preferences without reference to a larger agenda reflecting concerns of the nominating committee.”

Much of the week concerned accountability—auditing reports on the General Conference finances, adding fraud as just cause to remove a leader from the GC executive committee, and claims that Adventist beliefs provide reliable truth in an unstable world. But without practices in place that reinforce faith in decision-making at the highest level, current church leaders are building our Adventist house upon the sand.