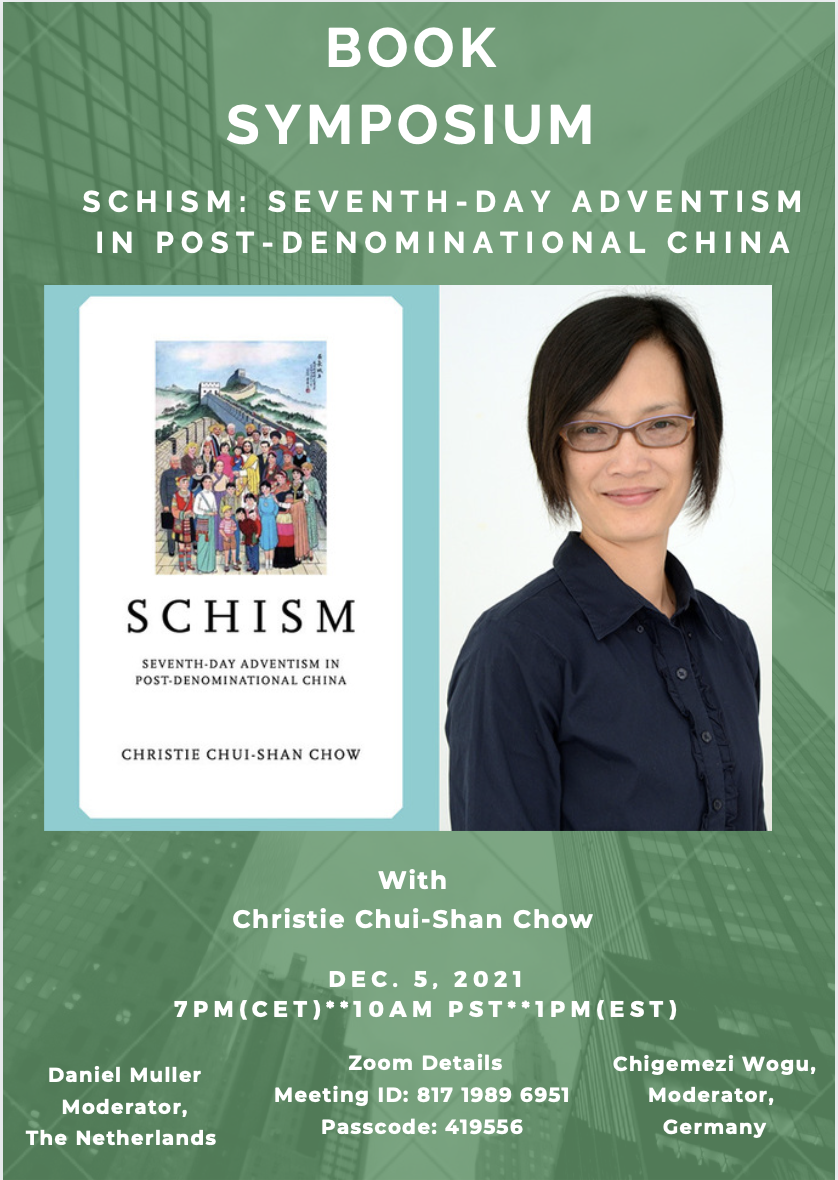 The online symposium will be presented on Zoom with Chigemezi Wogu, Germany; and Daniel Muller, The Neatherlands, as moderators on December 5 at 10am PST—1PM EST and 7PM CET. Zoom Meeting ID: 817 1989 6951 and Passcode: 419556

Schism is the first ethnographic and historical study of Seventh-day Adventism in China. Scholars have been slow to consider Chinese Protestantism from a denominational standpoint. In Schism, the first monograph that documents the life of the Chinese Adventist denomination from the mid-1970s to the 2010s, Chow explores how Chinese Seventh-day Adventists have used schism as a tool to retain, revive, and recast their unique ecclesial identity in a religious habitat that resists diversity.

Publisher of the book, University of Notre Dame Press, explains, “This book locates the Adventist movement in broader Chinese sociopolitical and religious contexts and explores the multiple agents at work in the movement, including intra-church divisions among Adventist believers, growing encounters between local and overseas Adventists, and the denomination’s ongoing interactions with local Chinese authorities and other Protestants. The Adventist schisms show that global Adventist theology and practices continue to inform their engagement with sociopolitical transformations and changes in China today."

A native of Hong Kong, Christie Chui-Shan Chow earned her Ph.D at Princeton Theological Seminary. Her research interests include World Christianity, Chinese Religions, gender, and church-state relations. She is the first female Seventh-day Adventist researcher who combines ethnography and history to investigate the Seventh-day Adventist movement in contemporary China. She has written a number of book chapters and her work also appears in the Journal of World Christianity, Social Sciences and Missions, and Exchange. More recently, she is co-editor of the Oxford Handbook of Seventh-day Adventism.

Chow holds a doctorate in religion and society from Princeton Theological Seminary. Her work demonstrates how “Chinese Adventists adhere to their denominational character both by recasting the theologies and faith practices that they inherited from American missionaries in the early twentieth century and by engaging with local politics and culture,” by searching into unpublished materials, fieldwork, oral history, and social media contents.

This book is the first release of a new book series, Liu Institute Series in Chinese Christianity, by Notre Dame Press in collaboration with the Liu Institute for Asia and Asian Studies, which will examine several denominations of Christianity in modern China. According to the Liu Institute, nine books are expected to follow, releasing approximately one per year. Alexander Chow, senior lecturer in theology and world Christianity at the University of Edinburgh, serves as the series editor.