Adventist Museum Opens in the Galápagos — and More News Shorts 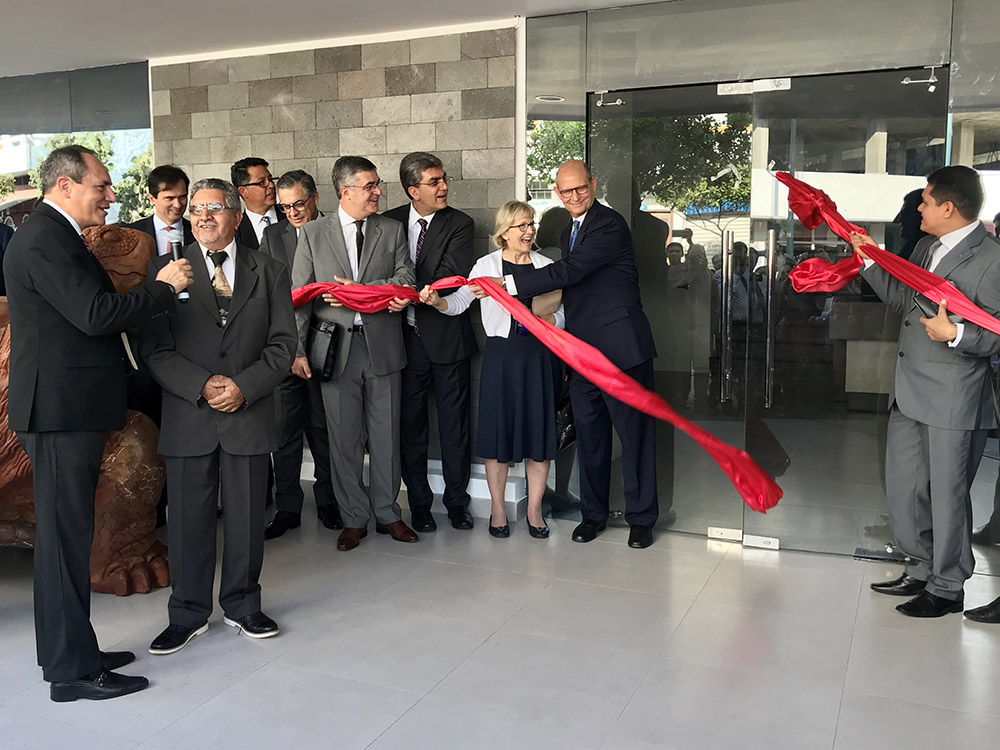 In this week’s news round-up, the Origins Museum opens in the Galápagos, a Spanish-language radio show in Michigan features healthy living advice from Adventist women, Solomon Islands Adventists raise sizable donation for Australia’s bushfire victims, and a 100-year-old retired physician in North Carolina is recognized for his many years of service.

Origins Museum of Nature Is New Adventist Center in the Galápagos. Adventist biology professor Lester E. Harris, Jr. acquired prime land on behalf of Loma Linda University nearly a half century ago that is now the site of a landmark museum and research center where tourists and scientists alike can explore the origins of the earth with state-of-the-art technology. The Origins Museum of Nature, located on the main Charles Darwin Avenue in Puerto Ayora, the tourist hub of the Galápagos, combines touchscreen televisions and virtual-reality headsets with fossils and giant tortoise shells to offer visitors an interactive experience where they can study the rich natural history of the legendary Pacific islands. Away from the exhibit hall, two museum rooms have been dedicated for scientific research.

The Origins museum received a warm welcome from government leaders and scientists at the inauguration. The vice mayor of Puerto Ayora thanked the Adventist Church for opening the museum and predicted that many visitors would view its exhibits. Hundreds of people celebrated the opening. “As Seventh-day Adventists, the source of our understanding of our origins, our reason for being here, and our purpose in helping nature to be preserved is found in our relationship with God,” Adventist Church president Ted N.C. Wilson told the audience at the inauguration of the museum on the evening of Feb. 29. “May many people come to know more about origins and God though this museum,” he said.

Harris, a renowned biologist who taught at La Sierra University and Columbia Union College (now Washington Adventist University), died in 2012 at the age of 89. He cofounded the field station with Ernest Booth, a professor who started the undergraduate and graduate biology programs at Walla Walla University and later taught at Loma Linda University. Booth died in 1984. From Adventist News Network, “State-of-the Art Adventist Museum opens on Galápagos.”

Spanish-language Radio Show Features Healthy Living Talks by Three SDA Women. CMY Radio, a Spanish-language radio station and multimedia company in Ann Arbor, Michigan, offers a health and wellness show called "Cúrate en Salud" ("Heal in Health") during El Pariente once a week hosted by three Seventh-day Adventist women. Silvana Marcos, one of the health show's hosts, says the women have been giving talks about health, especially healthy vegetarian cooking, for years at churches and other small gatherings. But CMY Radio is a way to reach an even larger audience and connect with the Hispanic community.

"Mostly people are focused on business or reaching their goals, and especially with immigrants, they are coming with a dream, with a purpose, and sometimes trying to get that you forget about (taking care of) yourself," she says. This show focuses on educating Spanish speakers about diabetes, high blood pressure, and heart health, and how a healthy vegetarian diet can aid in treating those conditions. Each month has a theme, like eating for heart health in February. For instance, on one February show, the hosts educated listeners about how good avocados are for the heart because they are high in good fats. The hosts showed that listeners can eat guacamole with vegetables or low-fat pita bread, or serve avocados sliced in a salad, instead of eating them with greasy, sodium-laden tortilla chips. From Second Wave Media, “Ypsi's Spanish-language radio station is bridging cultural divides with a sense of fun.”

The SDA Church commenced its countrywide two-week Bushfire Appeal on Sunday, February 9. The campaign comprised a series of fundraising activities including a 24-hour donation drive supported by youth volunteers and church members, singing groups, and a Grand Gospel Music Concert. Deputy High Commissioner Sally-Anne Vincent personally thanked the organizing committee and church community involved in the Bushfire Appeal. “Australia is deeply grateful for not only the monetary donations but all the time, thought, and effort that has gone into the different fundraising events over the past few weeks,” she said.

During the handover, Pastor Tovosia spoke of Solomon Islands’ strong connection with Australia, and how both countries supported each other as part of a wider family. He said he personally felt close to Australia, where he studied to be a surgeon, and this was just one of the many close links people from the SDA Church had with Australia. From Solomon Times, “Australia’s Deep Gratitude to SDA Church for Generous Bushfire Donation.”

At Age 100, North Carolina SDA Physician Recognized for Many Years of Service. Physician P. J. Moore, Jr. turned 100 recently. When Moore gave up his medical license just four years ago, at age 96, he was the oldest active surgeon in North Carolina, the state medical board told him. He earned his medical degree from Loma Linda University in December 1943. Moore loved surgery from the beginning. “I loved to use my hands,” he said. “I really enjoyed surgery, getting in there and taking out what was wrong and helping people.”

Moore is on no medication and exercises regularly until shoulder problems recently sidelined him. “I think there are several factors” that account for his remarkable health, said his son Bill. “One is no smoking. Never smoked, never drank, mostly vegetarian. My dad was a hunter and fisherman, and growing up, I ate fish and deer, chicken, but no pork ever, and very little beef.” His family always raised a large vegetable garden and drank powdered milk. Moore excelled at golf well into his 90s. Two years ago, when he was 98, he and son Bill won the Carolina Adventist Golf Association tournament at Mount Mitchell with a captain’s choice score of 74.

Born a Seventh-day Adventist and always devout, Moore put service ahead of self throughout his 70 years of medicine, 30,000 surgeries, and 1,000 babies birthed. He never turned anyone away due to race, religion, ethnicity, or ability to pay. “He has lived a life of uncommon service and skill,” a biographical sketch in a program for his birthday celebration observes. “His family as well as his colleagues, friends, patients, and community members are blessed to have known him.” From Hendersonville Lightning, “At 100 (on no meds), Dr. Moore reflects on a full life.”