Over 600 delegates, most representing churches and schools, gathered on Sunday, September 18, for the 2022 Oregon Conference Constituency Session. They met in Portland Adventist Academy’s gymnasium for an agenda that included votes on leadership and a series of bylaw changes. While disagreements arose throughout the day from the floor—particularly over questions of diversity—those on the platform emphasized unity.

The morning started with a passionate address from Dan Linrud, conference president, on themes of encouragement, diversity, and a call for each delegate to allow the Holy Spirit to guide them throughout the day.

Then the president of the North Pacific Union, John Freedman, took over chairing the meeting as voting commenced on the conference executive leadership. But the first motion of the day had already been received in writing: to refer Linrud’s name back to the nominating committee for reconsideration. This rare motion to refer back the president failed 44% to 56%. The contested vote on Linrud’s nomination follows the controversial firing of Gale Crosby, the former vice president for education, earlier in the year. It also comes two years after Linrud publicly marched in a Black Lives Matter protest, which upset some constituents. Throughout the rest of the day, delegates were heard expressing confusion about the vote. Due to the phrasing of the motion, the simple “yes” or “no” on the voting machines, and the 15-second voting period, some delegates weren’t sure what they were voting for.

In the final vote, Linrud was reelected with 73% in favor, needing only a simple majority. Before the vote, it was made clear that per bylaws decided at a prior constituency session, comments and debate would not be allowed on the floor. This led some delegates to question in private conversations whether any meaningful change in his election would have occurred had public comments been allowed.

Johnsson’s election was followed by a comment from the head of the nominating committee commending her as one of the few women to have achieved such a high leadership role within the conference and the church, which was met with resounding applause from the delegates.

The elections were followed by a series of videos and reports from the different departments. Some of the most notable findings were in the paradoxical relationship between church membership decline and tithe increase. Since 2018, the majority of churches in the Oregon Conference have been in a state of decline, with a peak of 77% of churches being in decline in 2020. That number decreased to 56% in 2021. Despite the drop in membership, tithe in the Oregon Conference has steadily increased over the last several years, in part due to several unnamed large donors.

In the education department, a stark drop in the number of students in 2020 was followed by a dramatic increase the next year and projected growth for the 2022–23 school year as well. 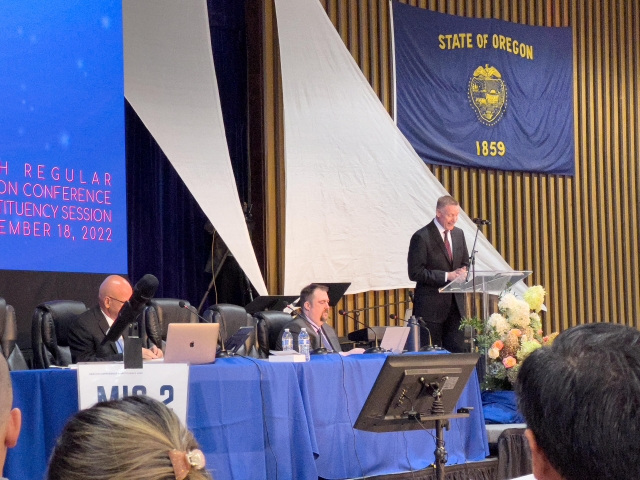 During the lunch break, two notable conversations were overheard among several groups of delegates: confusion over the first vote about whether to send Linrud’s name back to the nominating committee and the upcoming vote to reduce the power of the vice president for education position.

Before the discussion of bylaws began, a contentious motion was introduced to table the discussion and vote new bylaws in a special constituency session during the 2023 conference camp meeting. The distressed delegate who brought the motion felt that the current changes to the bylaws were riddled with errors and that voting on them would be perilous. Though failing to carry the required two-thirds majority, the debate carried on between the delegate and Linrud for several minutes. A second motion failed as well, and in total there was a 45-minute delay.

“I am a white woman, censored at times by extreme ideology because I am a woman and at other times by an extreme ideology because I am a traditionally-thinking white American,” said Teresa Valentine, the first delegate to speak. “We have no moral or legal duty to forbid the election of a certain race, economic class, gender, or age group. But we also shouldn’t be forced to elect or be represented based on outward appearances either.”

Valentine said she was also upset that Linrud participated in a peaceful protest following the murder of George Floyd in 2020. “Our conference president refused to protect our constitutionally-protected right to assemble freely while he eagerly marched with the BLM protest and openly campaigned against a presidential candidate,” she said. “The Spirit is not confined to the politically correct choice and neither should we be.”

The motion failed, with 54% of delegates voting against the diversity language. One delegate, Pastor Reginald Richardson Jr., who had just thanked Linrud in a public comment for marching during the 2020 Black Lives Matter protests, left the meeting.

“We saw the extreme fringes of our church on full display—that’s why I walked out in protest,” Richardson said afterward when reached for comment. “Whether it’s understanding those with disabilities, people of different genders, whether it’s race or ethnicity—if it’s not a white man, they don’t want it.” Richardson leads the Your Bible Speaks Community Church in Portland, Oregon.

The other issue with the most buzz throughout the day was whether or not to change the vice president for education role, including removing it from the group of executive officers. This would give the president greater control.

During public comments, Angela White, associate superintendent for education, was the first to speak. She noted that the new language might allow the vice president for finance to make financial decisions about the education department after consulting with only the executive officers. Linrud clarified later that there was no ill intent in this decision but only an attempt to align the Oregon Conference with the rest of the conferences in the Seventh-day Adventist Church. He also stated that it would not change the functionality of the role.

However, Linnea Stonebraker, a delegate from Cottage Grove Christian School, pushed back on Linrud’s comment. While it may not be the intent to change functionality, Stonebraker expressed that the change in language still would have that outcome.

At one point during the lengthy series of public comments, Dwayne Stevenson, a teacher and member of the constitution and bylaws committee, tried to clarify. Like Linrud, Stevenson only spoke about the intent of the change and not how the bylaw could affect the role in the future.

Showing the value constituents place in the power of education in the Oregon Conference, 66% voted to keep the vice president for education as an executive office.

A final series of votes concluded the day with one last attempt to hold a special constituency session at the 2023 Oregon Conference camp meeting to vote on changes to motions that failed throughout the afternoon rather than waiting until 2027. The motion failed with 80% voting no, leaving 2027 the next chance for so many Oregon Conference constituents to express their will.

Photos by the author.