“There Goes an Adventist Statesman” 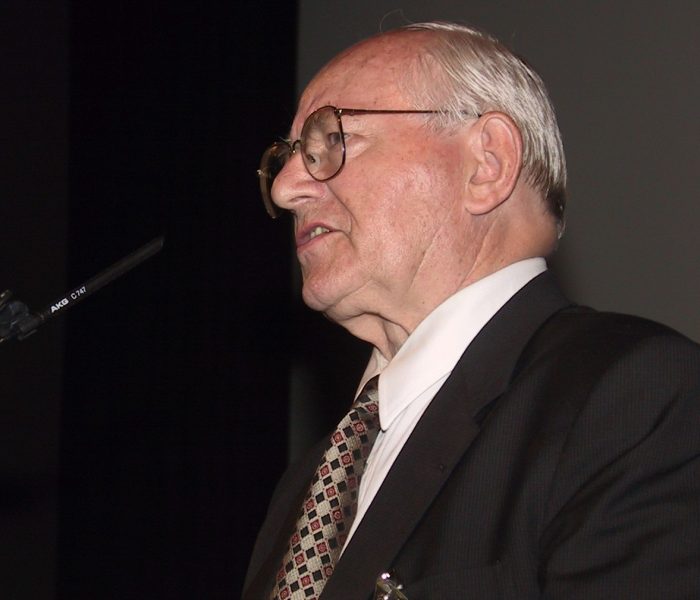 It was the former associate editor of the Adventist Review, Roy Adams, who watched Dr. Bert Beach turn a crisis for the church into an opportunity. During the 1991 meeting of the World Council of Churches (WCC) taking place in Canberra, Australia, there was an interruption from, as Adams describes, “a couple of disgruntled Adventists . . . who in the name of Seventh-day Adventists unfurled a huge banner . . . accusing the WCC of pandering to Rome.” The meeting was adjourned until order could be restored.

Beach, representing the church in his “special observer” category knew he had to act and secured permission to address the delegates. As Adams further describes, “His articulation of the Church’s position and how we viewed the rude interruption of the council’s legitimate business truly did us proud. And as the international delegation broke out into sustained applause when he finished, in my mind I said: There goes an Adventist statesman.”[1]

Bert Beverly Beach, the “Adventist statesman,” passed to his rest in Silver Spring, Maryland, United States, on December 14. He was 94. For many years he had served as the director of the Public Affairs and Religious Liberty (PARL) Department of the General Conference (GC).

Observing and Assessing the Rise of Ecumenism

In 1962 Beach served as the Education and Sabbath School director of the then Northern European Division (later Trans-European Division). It was during this time that the then editor of the Adventist Review, F. D. Nichol, requested him to attend and observe the Second Vatican Council during each autumn from 1962 to 1965. Combined with his long-time interest in education and history, attending these meetings awakened Beach’s interest in the area of religious liberty and inter-church relations. Although born to an American family, Beach’s roots were deeply European. Born in 1928 in Berne, Switzerland, he was granted a PhD in history from the Sorbonne, France, and married Eliane, who is Belgian. It will be of no surprise that he fluently spoke six languages, including French, German, and Italian. His appointment to the European Division as Education and Sabbath School director fitted his passion for life-long learning, openness, and inquiry.

Almost a decade later, in 1974, Beach was ready to share his insights into the ecumenical movement. Ecumenism: Boon or Bane? was written specifically to help Adventists understand the rapid rise and prominence of the ecumenical movement (then General Conference president, Neal C. Wilson, commended Beach as having “done a superb job”). The Second Vatican Council was indicating significant reform in Roman Catholic thinking and practice, and many mainline Protestants saw this development as potential for denominational walls to fall/boundaries to be blurred.[2] Reflecting the Adventist position, Beach’s work applied some critical thinking that in essence said, “Not so fast.” At the same time, Beach was fulsome in his praise for the sincerity of fellow Christians who put a high value on Christian unity and felt aggrieved by the sectarianism within Christianity. The book was to be, as long-time friends of Beach, Helen and Mike Pearson, describe it, “a sort of manifesto for his later life and work.”

The Call to “Mingle”

One of the most frequently heard calls in the Adventist community is for Adventists to “mingle” for the sake of sharing the gospel (Ministry of Healing 143). This Beach did, “with an insatiable appetite for bridgebuilding with others of different traditions as well as his own,” note the Pearsons. And yet, in the area of inter-church relations, bridgebuilding is so easily misunderstood as capitulating, an accusation Beach endured and which his successors in the religious liberty field continue to endure today.

Former General Conference President Jan Paulsen, who succeeded Beach as executive secretary in the Trans-European Division (TED) in 1980, expresses his appreciation for the life and service of Beach: “Bert Beach, more than any other leader from of our church, pioneered for us the importance of communicating with people whose religions convictions and values differed from ours—important for us to understand them and for us to be understood.”

Daniel Duda, TED president, said: “I met Bert Beach for the first time face to face in 1983, when I was his translator. He came from the GC to open a new local church building that was built in Banska Bystrica, Slovakia (then Czechoslovakia). Because of his own initials and the initials of the city, it was a source of some jokes that he came to preach for the occasion. (However, the reality was that because of his GC PARL position, he was on tour of the European communist countries to have the discussion with the authorities about the work of the Seventh-day Adventist Church). I previously read his book on Ecumenism and thus was able to ask him some questions and appreciate the breadth of his knowledge in the field of ecumenism. That was a start of many useful meetings, not only at the next six GC sessions but also at Newbold for his annual Beach Lectureship. He was an amazing example of someone who started in the department of education, but his usefulness to the worldwide church went vastly beyond that. He will be greatly missed not only as a true friend of TED but also as a senior statesman for the whole Seventh-day Adventist Church.”

“Those wanting to pay tribute to Dr. Beach may well find that he is impossible to categorize,” continue Helen and Mike Pearson. “No label fitted comfortably because he was unique. He had Adventist blood running richly through his veins. He was deeply loyal to his church in his theology, churchmanship, and administration. And yet there was something fresh about him. Key reasons for his success were his willingness to listen, his sharp intelligence, and his multi-lingual wit. These skills enabled him to move in very elevated ecclesiastical circles and won him many friends.”

Jean-Claude Verrecchia, former principal of Collonges and Principal Lecturer Emeritus in New Testament, Hermeneutics, and Second Temple Judaism at Newbold College of Higher Education, agrees. He remembers a visit with Beach to the World Council of Churches headquarters in Geneva.  “I watched this five-foot-six (168cm) Adventist gentleman knock on nearly every office door, greeting all the staff by their first names, from the most famous to the most anonymous. He was welcomed with large smiles and hugs, as a regular family member. He introduced me to everyone as if I were an important person—and we ended up together having lunch with the general secretary of the WCC.”

“It was as if Bert himself,” continued Verrecchia, “became a bridge between people. His modus operandi was the following: I know . . . you should know . . . let me introduce you to. . . . His mission was to make his church shine everywhere, to help those who serve it to be, like him, bridges that connect, link, and join what the history of Christianity has unfortunately separated.”[3] Less than a mile from the TED office is St Albans Abbey. During his tenure in St Albans Bert Beach connected with the then bishop of St Albans, Robert Runcie. (Photo: David Neal)

Beach’s tenure serving the church in Europe lasted 18 years, from 1962 to 1980. “Mingling” for Beach was not only restricted to the far reaches of Europe, and at the time West Africa, but also extended to the local. By the mid-1970s, the division office had moved to St. Albans, where Beach also served as an elder of the local church. It was during this time that he took opportunity to nurture a relationship with the then Bishop of St. Albans, Robert Runcie (Archbishop of Canterbury 1980–91). Beach invited Runcie to the opening of the new church building in 1980 opposite the division offices. Runcie declined, only because he already had a prior engagement—with the Queen! But to this day in the St. Albans church vestry hangs a letter from Runcie offering the warmest of greetings to the local Adventist community on their new building and mission to the city. 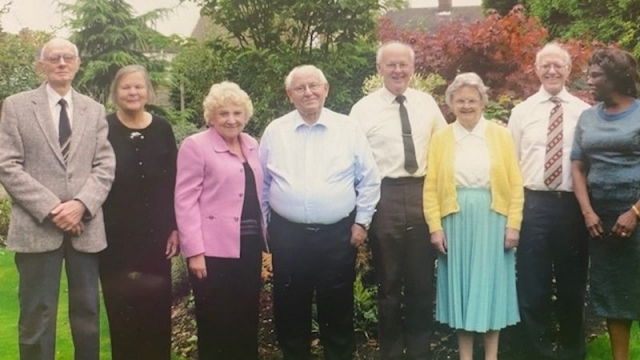 Even after his retirement, Beach continued to speak, preach, write—and mingle. As a signal of his development of thought, his January/February 2008 Liberty magazine article “Religious Freedom or Religious Fundamentalism” argued that “religious fundamentalism is in its essence not a doctrinal issue, but a basic outlook directed toward the current world order, protesting against laissez-faire societies.” It was a trend he found deeply disturbing because “it is in conflict with the dignity of the human person, a free moral agent with the right to be committed to his or her beliefs and convictions. There is often in fundamentalism a built-in resistance to freedom, learning, and creativity,”  forgetting that “God gave us all these gifts.”

A Passion for Openness and Inquiry

“As further testimony to his spirit of openness and inquiry,” both the Pearsons and Verrecchia share that he and his wife, Eliane, supported Newbold College in Bracknell, Collonges near Geneva, and Villa Aurora in Florence with endowments in support of this work. “At Newbold,” explained Helen and Mike Person, “this took not only the form of an annual Beach Lecture but, with personal encouragement and continued support from the Beaches, each institution found its own way to explore the wider world of ideas.”

“Beach,” they say, “taught students, with whom his classes on ecumenism were much sought after, to relate positively to Christians of different persuasions.”

From the Boon or Bane manifesto delivered in 1974, through the years serving in the area of religious liberty, and in serving on multiple special assignments for the General Conference post-retirement, has been a long journey. As the Pearsons reflect, “In his lifelong vocation of making connections on behalf of his beloved church, he delivered on that manifesto in the richest of ways that no other Adventist leader has quite matched.”

Who Then Should We Be?

Of all the insights Beach’s 1974 Ecumenism: Boon or Bane? provided, perhaps most helpful was a perspective of who the people of his faith community should be as they deal with the tension all Christ followers face, living expectantly in his kingdom between the “now and not yet.”

“Adventism is not a utopian vision of pie in the apocalyptic sky by and by. Adventists wish to be seed planters—seeds of love, kindness, peace, justice, temperance, health, purity, and brotherhood. Take for example, the whole question of a just and peaceful society. Although such a society will never fully materialize prior to the Parousia, it is the mission of the church to witness and proclaim the coming accomplishment of such a truly new and revolutionary society by standing for justice and peace, and by sowing the right seeds today. ‘True justice is the harvest reaped by peacemakers from seed sown in the spirit of peace’ (James 3:18, NEB).”

If ever there was a “sower of seeds,” Bert Beverly Beach was that man. And only eternity will reveal the abundant harvest of those seeds.

A private family graveside service was held on December 21. A celebration of his life will follow at the Spencerville Church, Maryland, United States, on January 29, 2023.

[1] Roy Adams reporting on the 1991 World Council of Churches, Canberra, Australia including an extended interview with B. B. Beach.

[2] Book review by Kenneth A. Strand of Ecumenism: Boon or Bane?

[3] One of the many books written by Bert B. Beach, Ambassador for Liberty (Review and Herald, 2012), bears the subtitle Building Bridges of Faith, Friendship, and Freedom. Both the German and French translations of this book have retained the word bridge as the main title, as it best summed up Bert’s life and ministry.

This article originally appeared on the TED website and is published here with permission.