Recognition Event Honors the Life and Legacy of Lucy Byard 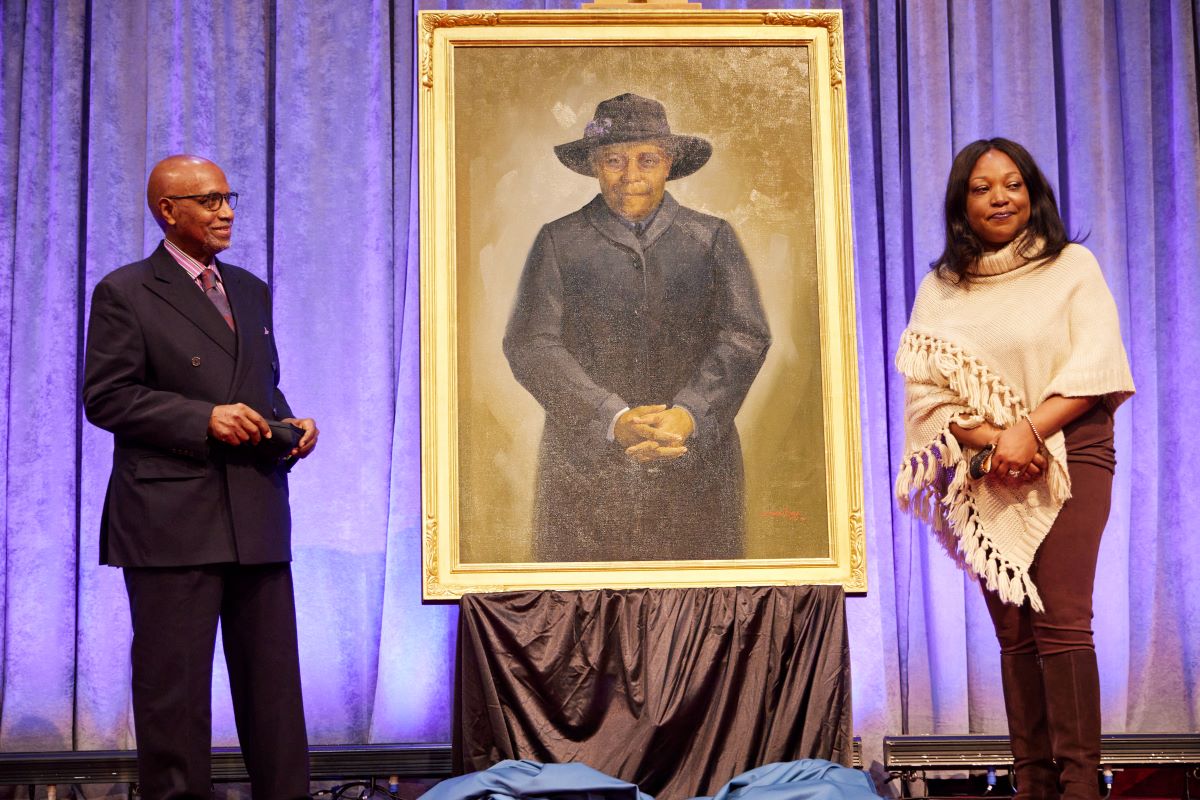 December 10, 2021, was a momentous day for the Seventh-day Adventist Church, Adventist HealthCare (AHC) and distinguished Historically Black Colleges and Universities (HBCU), as the life and legacy of Lucille “Lucy” Byard was both recognized and honored. Lucy Byard was a Black Seventh-day Adventist member who was turned away by the Washington Sanitarium in 1943 because of the color of her skin. On Dec. 10, Adventist HealthCare leaders unveiled a commissioned portrait of Byard, as well as a series of significant scholarships in her name that will benefit nursing students at each of the three universities.

The event brought together various Church, healthcare and community leaders and representatives to acknowledge the decades-old indignity and to move toward healing and reconciliation by owning the wrong and taking committed action to ensure it never happens again. “I’m really proud today to be a part of the Columbia Union, and part of a healthcare system that recognizes it’s time to set the record right,” said Dave Weigley, President, Columbia Union Conference of Seventh-day Adventists and chair of the Adventist HealthCare board.

G. Alexander Bryant, President of North American Division of Seventh-day Adventist Church, echoed those thoughts via a special video message. “To come together in recognition of Lucy Byard, who symbolizes the experience of so many African Americans, to commend her life and legacy is extraordinary,” commented Bryant, “especially in a day and age of so much divisiveness and so much racial insensitivity and so much inequality. I appreciate the significant efforts to acknowledge the past and to bring forth in constructive and tangible ways activities and programs to help validate the worth of all people.”

A Catalyst for Change

Lucy Byard was a devout Seventh-day Adventist woman who by 1943 had developed liver cancer together with cachexia, known also as “wasting disease.” Wishing to be treated in a Seventh-day Adventist hospital, and with an introduction from a renowned church leader, Byard traveled with her husband James from her home in Jamaica, Long Island to Washington Sanitarium in Takoma Park, Maryland—the first of the hospitals that now make up the Adventist HealthCare system.

As told through the work of Adventist author and historian Benjamin Baker, upon arrival, staff members of the Washington Sanitarium became aware of the fact that Lucy was Black. It was determined that because of the color of Lucy’s skin, she could not receive the care she needed at Washington Sanitarium and arrangements were made to have her transferred to Freedman’s Hospital, approximately six miles away.

Byard was treated at Freedmen’s Hospital, now Howard University Hospital. She died some 38 days later. Additional details of Byard story have been shared in various articles over the last few years.

There is general agreement within the Adventist Church community that Byard’s mistreatment was a key catalyst that sparked the creation of Black-led Regional Conferences. “As difficult as it was for people of color to recognize that their church, which they loved, operated a medical institution that did not and would not serve them,” explained Peter Palmer, President, Allegheny East Conference, “out of those heartbreaking circumstances, God birthed the Allegheny Conference of Seventh-day Adventists, which began operations on January 1, 1945.”

Palmer thanked Adventist HealthCare “for this opportunity to not only acknowledge the painfulness of our past, but just as importantly, or maybe even more importantly, to thank God for the future we are forging together.”

Leading the Way to Acknowledgment and Reconciliation

For Terry Forde, president and CEO of Adventist HealthCare, learning that a Black woman had been turned away from a healthcare facility he now led, was both eye-opening and heartbreaking. August 12, 2016, was “a day I always will remember,” shared Forde. “It was three years before White Oak Medical Center opened its doors and relocated from Washington Adventist Hospital in Takoma Park, Maryland that I learned that our mission, my mission, one that we hold in great esteem close to our hearts—to my heart—wasn’t able to reach everyone in 1943.” Forde thanked a few key individuals who brought the story to his attention and helped him better understand that pivotal moment.

“I have studied the pictures of the Washington Sanitarium and the patients being treated there, but I hadn’t really seen the people in those pictures...they were all white...” said Forde. “I needed to better understand that our healthcare was for some, but not always for all. I needed to understand so I could share this story with others so that we continue to never forget. I needed to better understand how health inequities still exist today, and to contemplate what collectively we can do to improve physical, mental and spiritual healing for all.” 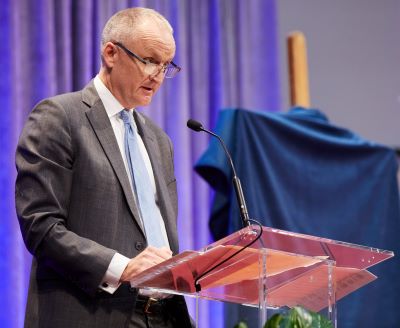 That moment of realization was Forde’s first step in leading the way to acknowledgement and reconciliation. He assembled the Lucy Byard Advisory Committee, comprised of church, community and healthcare-system leaders, and invited them to consider how best to honor the life and legacy of Lucy Byard, for herself but also as a talisman for every person of color who experienced then or experiences today inequity and indignities.

The committee’s work resulted in two recommendations: commission an original portrait of Byard and a series of three scholarships in the name of Lucy Byard for outstanding nursing students with limited financial means. In the scholarships’ inaugural year, 2022, Adventist HealthCare will work closely with three universities, Oakwood University in Alabama, Washington Adventist University in Maryland and Howard University in Washington, DC. to identify candidates.

AHC has pledged $500,000 in scholarship funds over five years, with the goal of establishing an ongoing endowment. In its first year, three nursing students will receive scholarships sufficient to finance their last two years of nursing school. They also will be invited to complete an externship at an AHC facility prior to graduation and to accept a job at an AHC facility upon graduation. Recipients are not required to participate in the externship or accept employment with AHC.

Weymouth Spence, president of Washington Adventist University, affirmed AHC for deepening “your commitment to equality and inclusion of care, which is lucidly reflected in your vision: We will provide a world-class patient experience to every person every time. And to memorialize this experience with academic scholarships to nurses.” Representing Oakwood University, trustee Lois Peters, shared that “we promise you, that we'll do everything within our power to put out young people who are going to live like Jesus, who will be able to come back into the Adventist health system.” 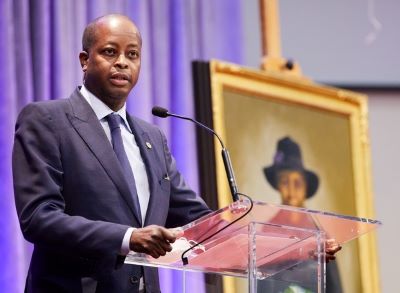 Wayne Frederick, President, Howard University, giving remarks about the importance of the scholarship.

“As you can imagine, the Lucy Byard Advisory Committee had many great ideas, but one in particular gained traction,” explained Anthony Stahl, president of White Oak Medical Center (WOMC), who chaired the Committee. “It was the idea of commissioning a portrait of Lucy Byard that could hang in the most highly trafficked area of the hospital...a place where patients, family members, staff, guests would stop, look, reflect and wonder who is this person, and then read her story.”

Finding just the right artist fell to Rob Jepson, chief operating officer of WOMC, who embarked on a nationwide search that led to the medical center’s backyard. Jepson eventually identified Simmie Knox, the first Black artist commissioned to paint a portrait of a sitting U.S. president as the best and most fitting choice. Knox’s paintings of President William Jefferson Clinton and First Lady Hillary Rodham Clinton today hang in the White House. Portraits of such notable figures as Thurgood Marshall, Henry (Hank) Aaron, Oprah Winfrey and Ruth Bader Ginsburg are among his body of historic work. Born of humble beginnings in Alabama, Knox soared to incredible heights on the strength of his talent.

Knox, now 86 years old, grew up in the Jim Crow South and knew the pain of discrimination, but persevered and earned a rightful place among the great artists of the 20th and 21st century. Working from only two existing—and very low resolution—images of Byard, Knox had to “read the details…from the shadows” to bring Lucy Byard and her story into the light. He explained that portraits make a special statement. He wanted to capture “the church lady,” her piety and her humanity. “It’s the details that create a portrait. Portraits make a special statement,” said Knox. “They say you are special. And this portrait, I think, will be viewed and in a place where it will be seen by many. And I think it’s a moment of healing.” 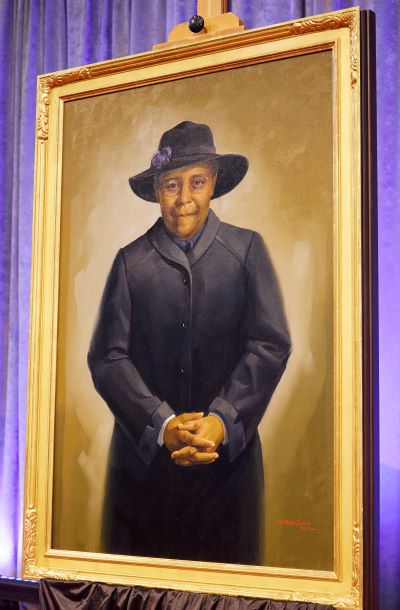 At the same time, Stahl felt it important to find a living relative of Lucy Byard so her family would be aware that Byard’s story was being commemorated and immortalized. The initiative proved challenging since the Byard did not have children of her own. Stahl considered hiring an investigator, but in the end, Walter Hawkins, WOMC director of Security—a seasoned genealogist—eventually found an older brother who had had children, which led to Lisa Sweeney Walker, Lucy Byard’s great, great grandniece.

“I just recently learned of Lucy’s story and I transported myself back to that time and I could not imagine the challenges that she faced and what she was going through,” said Walker, who has a strong physical resemblance to her ancestor. “From the bottom of my heart and on behalf of my family, I thank all of you for putting this together.”

Ironically, and improbably, Walker lives in Maryland. Anthony Medley, senior pastor of the Emmanuel-Brinklow Seventh-day Adventist Church and a member of the Advisory Committee, does not see irony but a Divine touch in any of the factors that came together. “The historical events of Lucy Byard and this reconciliation service by Adventist HealthCare is not merely coincidental,” shared Medley. “I firmly believe in the Providence of God who through the guidance of the Holy Spirit is completing his work on Earth for this life and for eternity. Thank you, Adventist HealthCare, for being a part of today and equipping us for our tomorrows. God bless you.”

Recognition Service Both Solemn and Joyful

Attendees characterized the recognition event as both solemn and joyful, filled with shared histories and stories, speeches, music and prayer. The service was held at the Southern Asian Seventh-day Adventist Church in Silver Springs, Maryland, allowing approximately 85 invited attendees to participate in a physically distanced way. Many invited speakers recounted their own experiences during an earlier time when people of color were routinely disenfranchised and disrespected, while expressing hope for the future.

The service concluded with a prayer offered by John Sackett, AHC’s chief operating officer. “Today, we have manifested our desire to reconcile this hurtful moment from the past and to once again commit to serve wholeheartedly those who have been undervalued,” prayed Sackett. “Please, dear Lord, bless and strengthen our resolve to never again turn anyone away that needs our care, to always respect and value every person. Let this beautiful portrait of Lucy Byard and the scholarships we award serve as a symbol and reminder of our resolve.”

This article was written by Corinne Kuypers-Denlinger, Adventist HealthCare, and originally appeared on the NAD website.