A Portrait of Adventism in Brazil

A Portrait of Adventism in Brazil 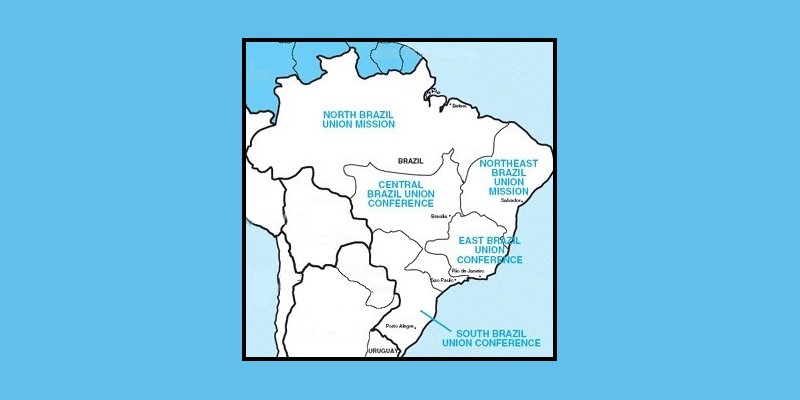 Brazil contains the most Seventh-day Adventists of any country in the world. According to the Office of Archives, Statistics, and Research 2020 report, the Brazilian Church has 1,721,758 members. The country makes up more than half of the membership of the South American Division, which itself has about twice as many Adventists as the North American Division.[1] [2]

The Adventist Church first reached Brazil in 1879 via literature arriving through the port of Itajaí impacting the German settlement of Brusque, located in the southern state of Santa Catarina.[3] In 1895, Pastor Frank H. Graf organized the first Adventist church in Brazilian territory following the baptism of 23 people. In that same year, Pastor Hulderich F. Graf established a second church in Rio de Janeiro consisting of individuals of German descent. Despite being located at the then capital of the country, the congregation’s main language was English. Hulderich then formed the first Portuguese-speaking Adventist Church in 1898 in the city of Não-Me-Toque, Rio Grande do Sul state. Its membership consisted of 48 members: 40 Brazilians, 5 Germans and 3 unidentified.[4]

According to the research of Pastor Edegar Link reported in Revista Adventista, among the first 12 churches in Brazilian territory, 10 were German-speaking. During the years 1895-1989 six of those churches were located in areas with higher populations of European immigrants.[5] Currently, there are 9,582 churches and groups distributed across Brazil, now almost entirely Portuguese speaking.[6]

The Brazilian Adventist church gathers for three weekly services: Sundays and Wednesdays at night, with the Wednesday one dedicated to prayer. On Saturday mornings the main weekly worship service starts at 9:00 a.m. with Sabbath School, followed by divine worship until around 12:00 p.m. It was common for members to have community lunches (potluck) in their churches, but this practice is now increasingly rare. Some churches hold additional meetings on Sabbath afternoons, or sunset services organized by their local youth ministry.

Adventist Education
Brazilian Adventist education, according to ASTR, has 517 schools: 335 elementary and 182 high schools, enrolling a total of 210,209 students, 79.1 percent of them being non-Adventists.[7] [8]

For higher education, the educational system has four colleges, Brazil Adventist University with four campuses; and the Latin American Adventist Theology Seminary. Higher education has 11,991 enrolled students, among which less than 60 percent are Adventist.[9] According to the country’s Ministry of Education, on a scale of 1 to 5, Adventist higher education has an institutional score of between 3 and 5, and its course offerings have a score of 3.[10] [11] [12] [13] [14]

Adventist education, in 2018, claimed to have approximately 50,000 grantees (about 22.6 percent of total students at the time) who met the criteria for government certified scholarships. Due to the high financial costs, the Adventist educational system has become increasingly inaccessible to many Adventist and non-Adventist students.

In 2020, Adventist education in Brazil and other South American Division (SAD) countries accounted for 38 percent of the field's total budget.[15]

South American Division and Its Past Presidents
The South American Division, consisting of eight countries, is based in Brazil, which has dominated its leadership. Since 1975 its presidents have been Brazilians, all from the southern part of the country, the same German immigrant region where Adventism first arrived. The southern Brazilian population is mostly white (74 percent), a race that represents only 43 percent of the national population.[18] [19]

Erton Köhler, the previous SAD president, remained in office the second longest. With little experience as a parish pastor, his ministry was almost exclusively in administrative roles such as Youth Ministry director and executive secretary in Brazil. The current SAD president is Stanley Arco, who, like Köhler, had little experience as a parish pastor; Arco, however, was the president of three unions and spent time in three different countries.

Pathfinders and Adventurers
The Brazil Pathfinder organization has 250,537 members distributed in 9,502 clubs. Its important social role for the country led 34 municipalities to institute a date in their honor in the town calendar, one of them having a whole week dedicated to Pathfinders every year. The Adventurers have 107,744 members in 5,692 clubs, and a date in one municipality in recognition of them. The National Senate currently has a bill before it to institute a National Day of Pathfinders, and one state has already instituted a state holiday in honor of them.[20] [21]

Evangelism and Church Growth
The Brazilian church emphasizes evangelism during three main periods of the year: Holy Week, Women's Ministry Evangelism, and Harvest Week. The combined efforts from 2015 to 2020 resulted in a 10.2 percent growth in membership and 13.94 percent in church numbers, namely, 175,694 new members and 1,336 new churches.[22] [23]

Novo Tempo Communication Network
The Novo Tempo Communication Network began in 1943 with the radio program A Voz da Profecia (The Voice of Prophecy). In Brazil, Novo Tempo TV is telecast on open channels to 735 cities and 17 capitals, and also on subscription channels throughout the territory. Its Portuguese language content is also broadcast in Angola, Mozambique, and São Tomé and Príncipe. Through the internet it reaches 172 countries. Currently, TV Novo Tempo has produced 31 hours of new shows, of which 10 and a half were live. In addition to radio and TV, Novo Tempo is also a record company for Adventist musicians and links programs to its streaming service, NT Play.[24]

Sexuality and Gender
Brazilian Adventists approach issues related to sexuality in a fundamentalist way, which has unfortunately led to national scandals caused by LGBT phobia. Currently, the Brazilian church supports and encourages a ministry that treats same-sex attraction as a “suffering” or disease.

SAD’s ecclesiastical-administrative policy has only a limited role for women in leadership, a reality reported as far back as 1986 by Adventist Review.[25] Currently, women account for 53.81 percent of SAD’s membership with 5,626 serving as church directors.[26] [27]

The major efforts involving gender issues are the initiatives of the “Quebrando o Silêncio” project (in English: “Breaching the Silence”) that seeks to empower women who are victims of domestic violence.

In 2012, a Brazilian female pastor serving in the US was asked to participate at a service at one of the university churches, and then-president Köhler advised the university administration to cancel the invitation. Köhler is now the executive secretary of the General Conference.

In July 2021, the division voted that women could be ordained as elders, but it has zero women ministers in its territory.

[2] Values and calculations based on data provided by the Annual Statistical Report 2020, volume 2, for the fields corresponding to Brazilian territory.

[20] DIVISÃO SUL-AMERICANA. Encontre um Clube - Estatísticas. Available at: https://clubes.adventistas.org/br/. Accessed November 14. 2021. (Survey made with the data of each union for the Adventurers and Pathfinders in its territory).

Jonathan Monteiro is a forest engineering student, creator and curator of digital content, podcaster and member of the editorial board of Zelota magazine.