Georgia Hodgkin Reflects on the Iconic “An Apple A Day” Cookbooks “Tell me you’re Adventist without telling me you’re Adventist!” A fond mention of Special K Loaf (mixed with sudden pangs of hunger and a twinge of nostalgia) might be one of many possible answers. Not the deepest answer, but certainly the tastiest.

Meet Georgia Hodgkin, the dietician extraordinaire and editor of volumes two and three of the iconic An Apple A Day cookbook series that has significantly influenced multiple generations of Adventist food culture—of which Special K Loaf, or Cottage Cheese Loaf as it is sometimes referred to, is a prominent fixture.

Though the editors of volume one, where the original Special K loaf recipe first appeared, were Marguerite Smith and Marcella Griggs, Hodgkin was instrumental not just in editing volumes two and three but through her involvement in the series. Apart from her work as a professor of nutrition and dietetics at the School of Allied Health Professions at Loma Linda University, she became a prominent voice in the vegetarian nutrition space during a time when vegetarianism was not just thought to be insufficient for good health, but outright quackery.

“Apple A Day started in 1967 when people used to say, ‘Vegetarian diets are crazy. You can't possibly be healthy on a vegetarian diet,’” recalled Hodgkin, who retired in 2020 after 42 years. “But history, science, and the Adventist Health Study have shown that we are healthy on those ‘crazy diets,’” she laughed. “Marguerite and Marcella produced a cookbook of tasty, healthful, delicious recipes, and it has grown into a whole series.”

Indeed, it was the recipes of these “crazy vegetarian diets” that skyrocketed in popularity in the Adventist world at church potlucks, institutional cafeterias, and Sabbath lunches from the 70s forward. Just ask almost any Adventist Baby Boomer or their Generation X child, and they may well have a fond food memory to share that originated somewhere deep in the now yellowing pages of a treasured An Apple A Day cookbook (looking at you, volume one).

The fact that the books were vegetarian during a time when vegetarianism was unheard of, oddly enough, also contributed to their popularity. “It wasn't until Mervyn Hardinge [founding dean of the School of Public Health at Loma Linda University] got his PhD at Harvard and did his dissertation comparing meat diets to vegetarian diets that it became clear vegetarian diets could provide complete nutrition,” Hodgkin said. “These cookbooks are good because they speak to many of the principles that Ellen White spoke to that other cookbooks are completely oblivious of. And the recipes are simple, easy to make, with readily available ingredients.” 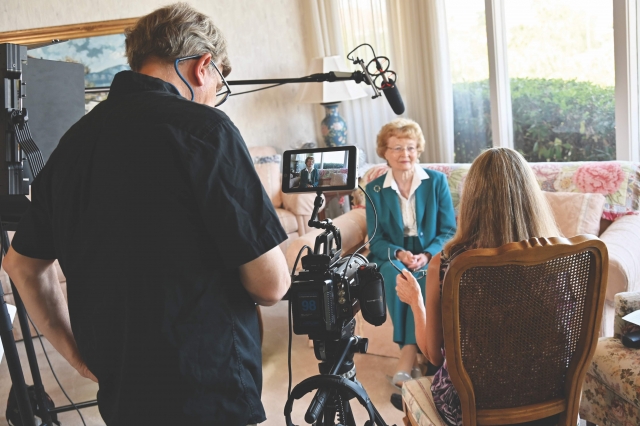 Hodgkin shared some of her memories of working on the cookbooks. “I was asked to be president of the Loma Linda Chapter of the Auxiliary [that publishes the Apple A Day cookbooks],” she said. “We would meet in the Alumni Building around this huge conference table with a huge mound of scraps of paper with recipes on them, and we'd pull one out, somebody would read it, and say ‘yeah, I think, that looks good.’”

Hodgkin recalled one recipe in particular that didn’t quite make the cut. The recipe called for hiding a one-inch cube of pork in the middle of the otherwise vegetarian casserole. “Needless to say, that recipe went in the circular file,” she laughed, referring to the recipe’s immediate one-way trip to the wastebasket.

Each of the three volumes in the Apple A Day series had its own unique theme. Volume one was published in 1967 during a time when vegetarian diets were not common, and though it was purchased mostly by Adventists, it made vegetarian “cookery,” as it was called, available to a wider audience.

Volume two was published in 1983, when the American Dietetic Association was emphasizing less salt, sugar, and fat. “The desserts in volume two have two teaspoons of sugar per serving, which is phenomenal,” Hodgkin said. “A piece of pie has many more than that.”

Volume three, which was published in 2009, looks at the history of the School of Medicine, the Auxiliary, and the country. It is divided into decades and includes historic photos of the original Loma Linda hospital and the surrounding orange groves. Volume three was a celebration of the School of Medicine’s centennial anniversary, “the Auxiliary’s contribution to the celebration,” said Hodgkin.

Does the dietician herself have any personal favorites in all the recipes?

“I really enjoy the banana bread recipe from volume one,” Hodgkin said. “In volume three, the chocolate chip recipe is a ‘health cookie.’ It's full of walnuts and oatmeal. We'll forget that it has chocolate chips, which are mostly sugar, and just focus on the walnuts and the oatmeal. People really seem to enjoy it,” she laughed. “And there's a broccoli cheese casserole in volume two that's really quite tasty.”

And though she did not work on volume one, Hodgkin confirms what has been generally known for decades about its most famous recipe.

“The favorite recipe of all three cookbooks is Special K Loaf,” she said, to no one’s surprise, also citing the creator behind the recipe. “That is Betty Jutzy’s recipe. I envision that on Sabbath throughout North America there are cottage cheese loaves sitting on everybody's buffet table thanks to Betty.”

But apart from its cultural significance and popular recipes, the Apple A Day series was also part of a wider worldwide health promotion ministry.

“A healthy diet is very helpful in our spiritual lives. I believe nutrition is the very foundation of health,” Hodgkin said. “Being healthy puts you in a frame of mind where spiritual things are of greater interest, and you can focus on them much better. Apple A Day cookbooks are popular because they follow the nutrition guidelines that were laid down in 1863 by Ellen G. White.”

Unbeknownst to many, the Apple A Day cookbooks also play an important role in supporting medical missions, as all the sales benefit mission programs, which is a key function of the Loma Linda University Medical Auxiliary. According to Hodgkin, volume one alone has sold 200,000 copies, all of which benefited mission projects.

Part of the reason for the books’ soaring popularity, and the way they became a staple in many Adventist kitchens, was that they were popular gifts for many years, such as birthday, housewarming, and particularly wedding gifts. 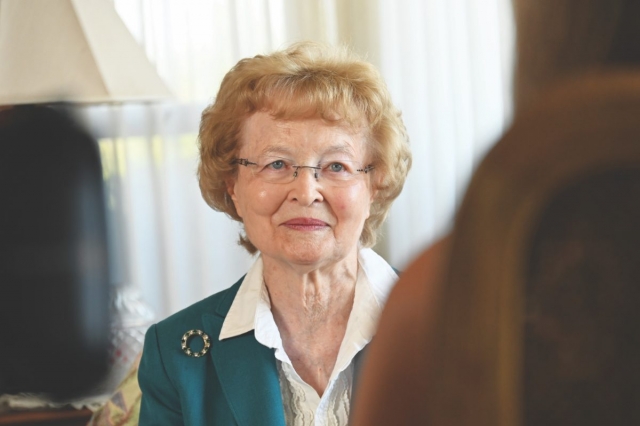 Hodgkin’s dedication and work across multiple generations has made an indelible impact on the very health and lives of countless people, not just through the vegetarian recipes themselves but through the fellowship and happy memories they have fostered. That counts too. And on and around the Loma Linda University campus, Hodgkin is known for her compassion, kindness, and dedication to students.

“Georgia is the kind of person that is someone you'd like to emulate professionally and personally,” said Kent Chow, assistant dean, finance, School of Allied Health Professions, in a video interview for the scholarship set up in Hodgkin’s name.

“She has a way of letting you know that she cares about you and that she wants the best for your future,” said Cindy Kosch, a former student and now assistant professor in the School of Allied Health Professions in that same video.

Georgia Hodgkin may have formally retired, but her life continues to be one of service. Only in heaven will the full impact of that love-driven service be fully seen.

“I’m not sure if my dad said this, or where I heard it, but you cannot outgive the Lord,” Hodgkin said in the video interview.

For more information on the Loma Linda University Medical Auxiliary or to purchase An Apple A Day cookbooks, visit https://llumedaux.org/.

Cynthia Mendoza is a freelance writer from Southern California. This story was originally published by the Pacific Union Conference Recorder Magazine and appears here with permission.

Photos courtesy of the Recorder Magazine