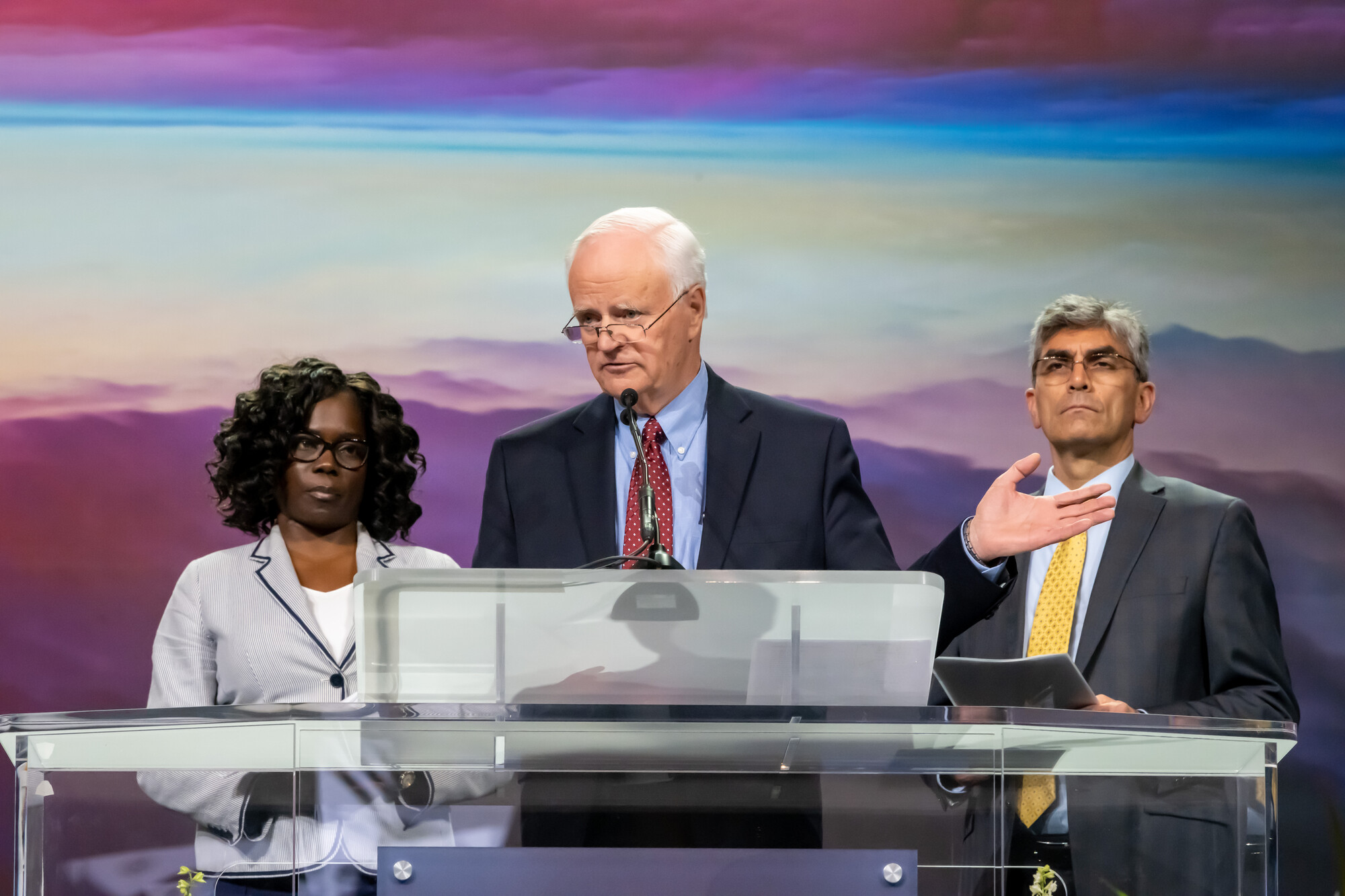 During the Wednesday night business meeting at the 2022 General Conference (GC) Session, Lowell Cooper, chair of the nominating committee, responded to concerns about diversity and representation during the nomination process.

“There was some uneasiness in the body last night in the process of selection and recommendation of names for leadership positions at the General Conference,” Cooper said. “I just wanted to assure the body that the nominating committee has asked many of the same questions perhaps more times than they have been asked here; the questions of diversity, the questions of representation, and the question of age—which you cannot ask in the United States.”

Cooper said the nominating committee reviews many factors during the nomination process and that a single factor alone cannot determine a candidate’s qualification.

“We look at a number of areas, and in the total mix of all the considerations that are given, to try, under God’s guidance, to exercise our decision in a way that would bring a recommendation to you,” he said.

GC Human Resources Director Lori Yingling provided demographic information of GC employees in executive, professional, and managerial positions. According to a 2021 report, 62% of employees in the positions are men and 38% are women. Regarding ethnicity, 55% are white, 17% are Latino or Hispanic, 16% are Black or African American, 9% are Asian, and 3% are two or more races. The average age of employees in executive, professional, and managerial positions is 54, while the average age of elected officials is 60. Every division was represented in the report.

Nominations for world division officers, with the exception of those from the Euro-Asia Division (ESD), and GC departmental associates were announced and approved during the afternoon and night business meetings. The term of office for the ESD officers has been extended until the 2022 GC Annual Council due to unusual circumstances prevailing in the division.

See below for a list of positions confirmed on Wednesday, June 8, 2022.

A new addition to the Church Manual, Adventist Possibility Ministries, was proposed during the Wednesday night business meeting. The addition is an initiative to be more inclusive of people with special needs and those who are deaf.

The addition, according to the session agenda, states that the church recognizes deafness “as more of a cultural characteristic than … a disability.” It also recommends that church boards appoint a local possibility ministries leader, preferably one who has direct experience or education with the ministry.

Diane Thurber, North American Division delegate, stood in support of the addition. She stated that she is an advocate for people who are blind through her work at Christian Record Services and as a member of the GC Adventist Possibility Ministries advisory and task force for the blind.

“Adding this section to the Church Manual will raise awareness and will help to ensure there’s representation at the local church for anyone with a visible or hidden disability who may need accommodation and for someone who is deaf,” Thurber said. “But even more important, we as a church will learn more about how to include all God’s children who desire to help advance the mission of our church. The body of Christ is not complete without these brothers and sisters.”

“There are millions and many, many people that are deaf that are not yet represented,” said Jordan through the American Sign Language translator. “I’m happy to be the representative as a deaf individual here on the floor. But we are supporting this motion, this part of the Church Manual, to be more inclusive of deaf, and blind, and those who are people that are on the list that you have read, and each person that has the possibility that God can use.”

The addition of the new section passed with 99.6% approval.

Delegates also addressed amendments that encouraged the diaconate to assist church members who have special needs under the “Duties of Deacons” and “Duties of Deaconesses” sections. Concerns about resources and specific qualifications to assist people with special needs were voiced. Concerns about having separate sections for deacons and deaconesses were also voiced but dismissed by the chair since the specific additions being addressed did not deal with gender.

Delegates passed another addition to the Church Manual that creates a Spirit of Prophecy writings coordinator position in local churches. The motion passed with a 66.3% approval rate, one of the lowest of the session.

South German Union Conference delegate Rabea Kramp supported the addition, stating that it could benefit the church during the end times.

“I really appreciate this idea to create a new position of a coordinator for the Spirit of Prophecy, especially because we know that one of the signs of the end will be the making of non-effect of the Spirit of Prophecy,” Kramp said. “So, I hope this position of the coordinator in our local churches might help to minimize this development in the end time and makes us aware of the wonderful gift of Ellen White and her writings.

“Several fields in our world church treat these inspired writings very differently after the fact that in some areas, church members are not allowed to distribute Ellen White books for our mission because the church leaders hinder that or even forbid it,” Kramp continued. “So, this new section can be a sign that we need to uplift her writings even more. And I know many church members in Europe, young and old, who would enthusiastically welcome this new section and would be more than willing to put it in practice.”

*Term of office has been extended until the 2022 Annual Council due to unusual circumstances prevailing in the division.

*Term of office has been extended until the 2022 Annual Council due to unusual circumstances prevailing in the division.