Ted N. C. Wilson was reelected to a third term as president of the General Conference (GC) of the Seventh-day Adventist Church on the first day of the 2022 Session. Wilson was nominated at the end of the Monday night business meeting and received a 74.9% approval vote from delegates. A total of 1,715 votes were received.

“It is indeed a very humbling experience to be requested to assist and guide God’s last-day remnant church,” Wilson said after being reelected. “It is not something that a human being can do on his own—it is only through the power of the Holy Spirit.”

Wilson was first elected in 2010. At the end of his third term in 2025, he will be the second-longest serving GC president. 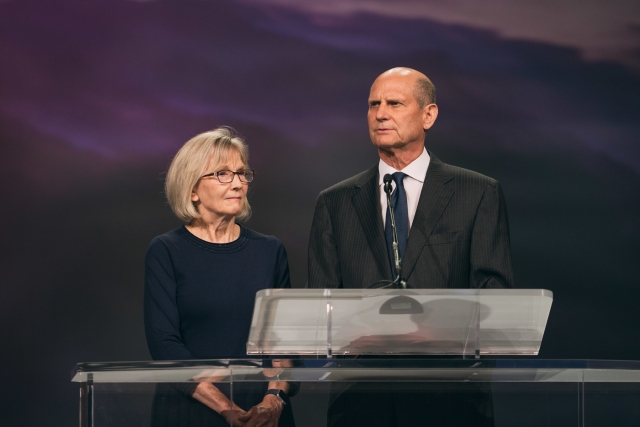 Ted Wilson addressed the delegates after he was reelected in a rushed vote at the end of the day. (Photo by Pieter Damsteegt / North American Division)

Amendment proposals to the Church Manual were discussed earlier during the Monday night business session. According to the current Church Manual regarding the ordination of elders, ordained elders are “qualified to serve as deacons.” One amendment proposed that the word “deacon” be replaced with the gender-neutral term “deaconate,” which the Merriam-Webster dictionary spells as “diaconate.”

The amendment also proposed to add the following sentence to the manual: “When a church in a business meeting votes the election of new elders, it also authorizes their ordination.”

Gerard Damsteegt, GC delegate, motioned that the amendment be sent back to the Church Manual Committee. He said the Bible states that elders must be male and the gender-neutral term implies that women could be ordained as elders. In his request, Damsteegt mentioned 1 Timothy 3:2, which states: “A bishop then must be blameless, the husband of one wife, temperate, sober-minded, of good behavior, hospitable, able to teach” (NKJV).

Jonas Arrais from the Northern Asia-Pacific Division stated he was against sending the amendment back to the Church Manual Committee.

“This document is very clear,” Arrais said. “We are not discussing women’s ordination, as some of us maybe are thinking. We are here just suggesting that elders should be ordained.”

Arrais referenced a vote made in 1975 during a General Conference Spring Meeting that allowed women to be ordained as local elders. He also mentioned the 1984 Annual Council’s reaffirmation of that vote.

Damsteegt had also mentioned the Annual Council meeting previously in his motion.

“Women elders were voted in an Annual Council but never brought to the General Conference Session, which has been stressed by Ellen White,” Damsteegt said. “For any major changes, the whole representatives throughout the whole world—they need to vote, and not a small section in the Annual Council.”

Delegates voted not to refer the amendment back to the Church Manual Committee by 56.1%. The motion to amend the section according to the session agenda was approved by 75.7%. Delegates reached the decision an hour after Damsteegt had made the initial motion.

During the morning business session, attorney Jonathan Zirkle motioned to add the topic of vaccinations to the GC Session agenda. Zirkle is associated with the Liberty and Health Alliance, an organization founded by Seventh-day Adventists that promotes medical freedom, according to its website.

Meeting chair and GC General Vice President Artur A. Stele initially dismissed the motion, stating that vaccinations are not a topic of constitution and bylaws, Church Manual, or fundamental beliefs. Stele brought the motion back into discussion after Zirkle requested that Stele ask for a second, and Grace Mackintosh, a delegate from the Seventh-day Adventist Church in Canada, seconded the motion through Zoom. 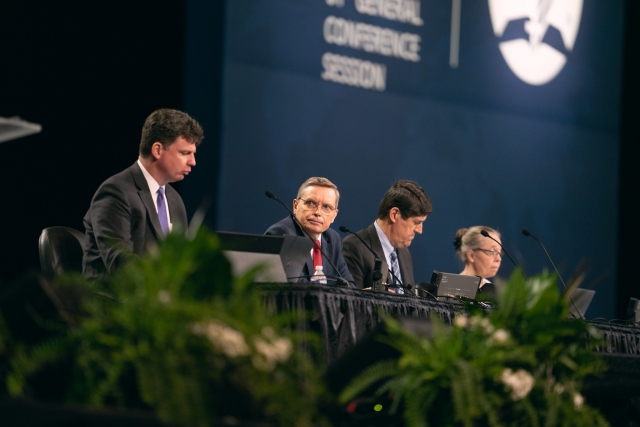 Restating Stele’s initial reason for dismissal, Wilson stood for comment and urged delegates to consider voting down the motion.

“I want to strongly urge, and I have the consent and agreement of my fellow officer, Erton Köhler, and my other fellow officer, Paul Douglas, that we stand united in asking this body not to put that issue on the agenda,” Wilson said. “Rather than for us to become embroiled in something that is not an item for a General Conference Session discussion, we respectfully, kindly, and very much in a determined manner, ask that you, the delegates, vote ‘no’ on placing this item as an agenda item.”

Zirkle’s motion was made amid internet connection issues. At this GC Session, voting uses the ElectionBuddy system. Delegates are given unique, secure login credentials but then vote using their own electronic devices. For delegates attending in person, a specific Wi-Fi network is supposed to provide the required internet access on the floor. During the vaccination discussion, delegates rose to comment about internet connection issues and to question methods of voting. GC leadership instructed delegates who were present on the floor to log online with only one device that would be used to vote and receive information. Leadership representatives also requested delegates who could use cellular data to disconnect from the Wi-Fi to clear up the connection.

1,782 delegates were eventually able to vote online for or against adding a vaccination discussion to the agenda. The motion was voted down by 88.6%.