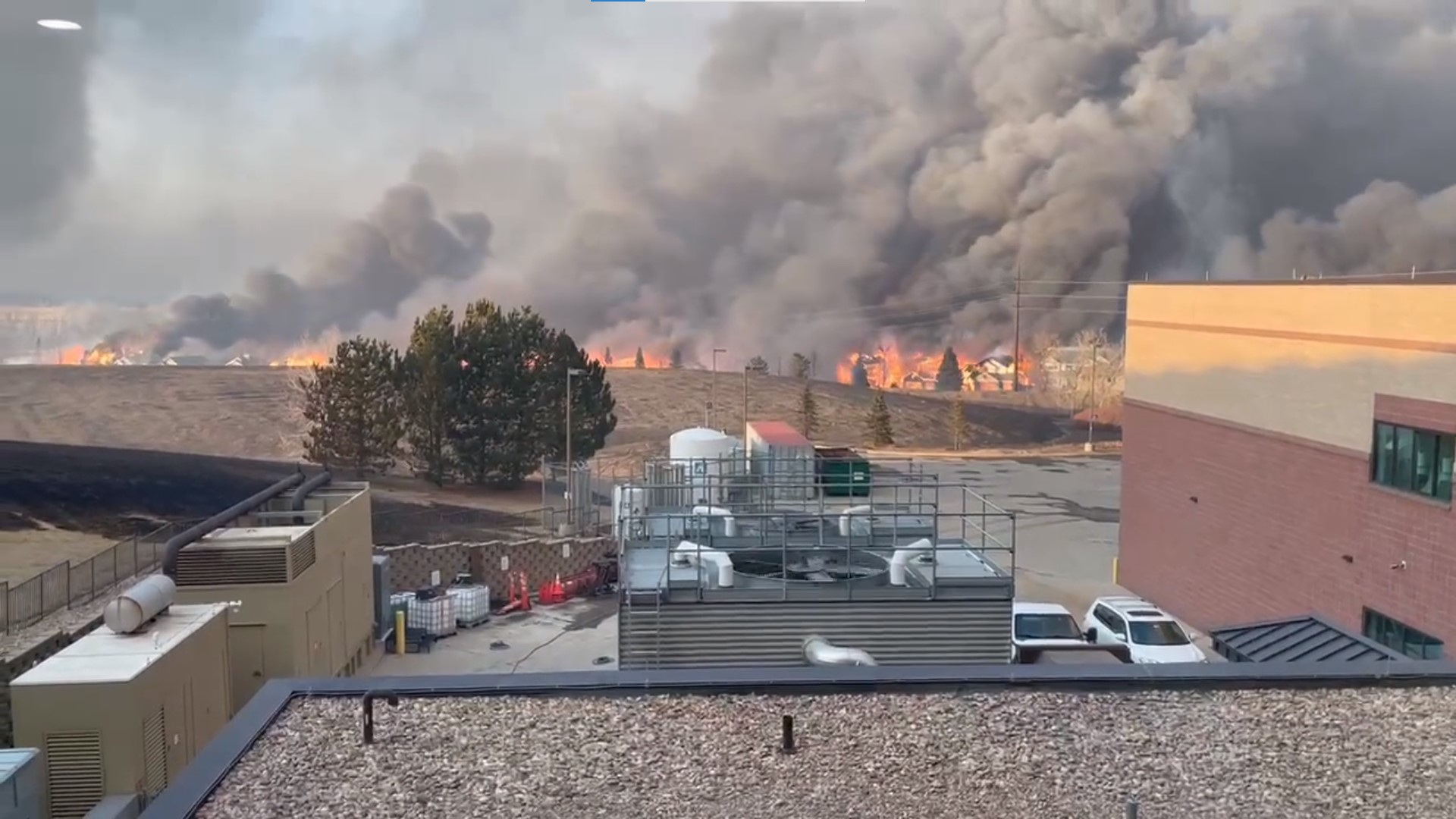 Newly released video showed flames from the Marshall Fire burning just outside Centura Health and Avista Adventist Hospital in Louisville, Colorado, while tree-sized flames crested the hill toward the medical facility. Amazingly, the hospital escaped any direct damage from the fire, but officials said smoke damage will keep the building closed for now.

"The high winds were driving the fire straight toward our hospital on the north side, so to return hours later and find no significant damage is truly a miracle," the hospital’s chief executive officer Isaac Sendros explained. "We are eternally grateful and thankful to the first responders who responded with urgency and have tirelessly worked since the fire first erupted in our community."

Officials said the fire, which left hundreds of homes in the county destroyed, came within feet of hospital oxygen tanks that could have led to an explosion. One nurse detailed the evacuation of patients from one end of the hospital to the other as the flames neared. Soot and ash could be seen across the hospital floor.

Crews are surveying the full extent of the damage to the hospital’s heating and air system in hopes of getting the building back in working order. The hospital's air filters and other equipment are already in the process of being replaced. The Colorado National Guard is also providing help to the hospital

Boulder Adventist Church and Twin Peaks Adventist Church have accounted for all their members. Unfortunately, one member of the Boulder church lost their home in the fire. Others discovered their house, against all odds, survived.

—From the Rocky Mountain Conference, "Devastation Widespread in Superior and Louisville."

While many are celebrating Christmas with loved ones, others are not so fortunate—and often forgotten. That’s where Minnesota Adventist Prison Ministries' "Christmas Behind Bars" program hopes to fill the void.

The gift packages consist of snacks with a spiritual book and information about the program. The aim of the organization, by delivering the gift packages, is to lift the spirit of inmates during the holidays when they need a touch of kindness the most.

The congregation of the Jefferson Avenue Seventh-day Adventist Church met outside what was left of their house of worship to hold a vigil after a major fire on Christmas Day. After most of the structure was damaged, the congregation was joined by regional Adventist conference leaders, other pastors, and city leaders to pray. The faith and goodwill shared helped this church community to grow stronger.

“The Church is not within the four walls. This is the Church,” Pastor Hanson Drysdale preached to the congregation. “I am just looking at the building and looking at the future,” Pastor Drysdale continued. “Just envisioning what God is about to do. Because I've always said that nothing takes God by surprise, and he knew about this way in advance. So, we know that we are in good hands.”

Operating at this location for more than 60 years, the memories are endless to people in and outside the congregation. Giving many in the community motivation to come to the church's aid after all it had done for them.

“As a kid, I was in daycare here,” Rochester City Council Vice President Willie Lightfoot said. “This church has had a tremendous impact on my family and this community.”

“Some persons got dedicated in this Temple,” Pastor Drysdale remembered. “They met their spouses, they were baptized, they had family members that have their funerals here.”

A GoFundMe page has also been started by Pastor Hanson Drysdale to raise funds to help rebuild the Church, with the goal of reaching $250,000 eventually.

Food and holiday items were collected by three Lima, Ohio, area groups to support Emmanuel Flowers. Representatives from some of those organizations arrived at Flowers' house to surprise the family and drop off all of the donated items.

“Between his cancer diagnosis and the threat of COVID-19, it’s been challenging times for Mr. Flowers,” said Patricia Freeman, a volunteer and friend of the participants.

“We pray for you,” he told Flowers, who was diagnosed with diffuse B-cell lymphoma on October 1. “And we thank everyone who helped with this project.”

The Gospel Tabernacle Seventh-day Adventist Church congregation teamed up with Big Brothers/Big Sisters and Community Action Program to spread Christmas cheer. They wanted to involve some of the young people in the community to lend a hand to people going through a tough time.

"We do a lot of things for their enjoyment, for them to have fun, but we wanted them to think beyond that, for them to be mindful of doing things for others, not simply just enjoying themselves," said Michael Hayden, a local Big Brother who is mentoring young men.

—From Hometown Stations, "Three Organizations Join in to Help Man Battling Cancer," and the Lima News, "All for One: Community Unites to Help Cancer Patient."

Zambia is mourning the deaths of five Seventh-day Adventist youths. The tragedy occurred at Lake Kariba during a camp meeting program in Siavonga. The five are said to have jumped off a fishing rig they found parked by the shores of the lake. According to a statement from the Seventh-day Adventists Youth communication desk.

Please note: Spectrum news roundups are an aggregation of regional, national, and international publications around the world that have reported on stories about Adventists. As such, the accuracy of the information is the responsibility of the original publishers, which are noted and hyperlinked at the end of each excerpt.