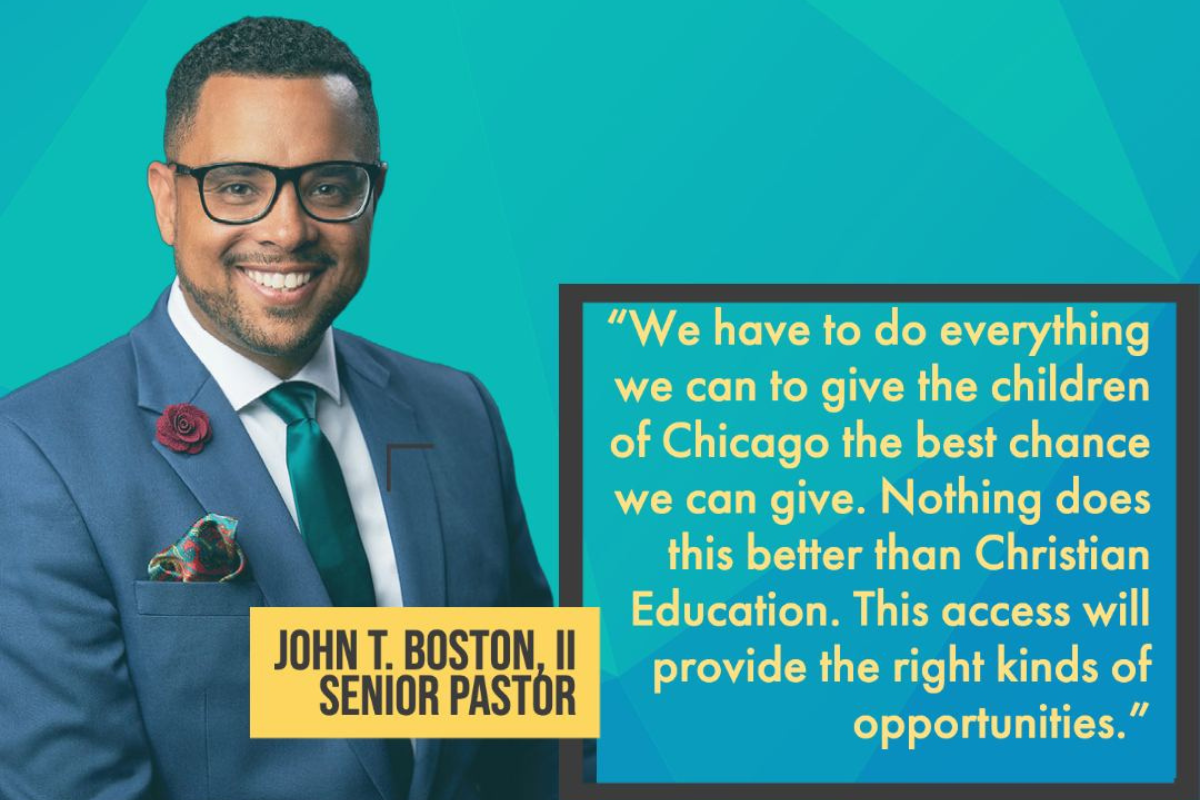 Shiloh Church Pastor John Boston II shared the news that his church voted unanimously to provide free tuition for students attending the Chicago Seventh-day Adventist Christian School. Boston said the goal was to “do everything we can go give the children of Chicago the best chance we can give. Nothing does this better than Christian Education.”

The Chicago Seventh-day Adventist Christian School sits in Chicago’s Southside and “since 1913 has served generations of pre-Kindergarten through 8 grade students.”

Debbie Michel, Lake Union Conference communication director and Lake Union Herald editor, interviewed Boston about the decision. “We couldn’t afford not to do something in this area,” he said. “The Southside of Chicago is riddled with violence on the news. This Adventist school is probably one of the most viable opportunities to make a difference in this community. Many urban Adventist schools and churches are not doing well. We believe at Shiloh that our path to heal our community is through Christian Education. Right now, we have begun speaking with local and international agencies fighting human trafficking: 16,000 young girls are trafficked in Chicago each year. That’s two every hour. This was the time for us to step out and stand in the gap. Jesus is coming soon and we need every available tool to reach the hearts of the people around us.”

The church is using its “entire evangelism budget for the rest of 2022 and the first half of 2023 and funds given by several donors to finance the project.” Boston explained that “the final piece comes in from donors in Chicago and around the world that want to be a part of making this kind of difference. This is a need-based scholarship. Once a family applies, we apply the spiritual care necessary to make sure we make room for their children every way we can. Some parents can afford to sacrifice money to place their children at this school, but we want to make sure they don’t have to decide between meals, gas, rent, and tuition. We step in to get the tuition where they can’t handle it. For some that means 100%; for others that will mean much less. The bottom line is that we will not allow tuition to be an obstacle for any family that comes to us.”

Boston expects “exponential growth” from the initiative. “Really, we want the floodgates of change in our community to pour through the church and the school,” he said. “Jesus is coming soon, and if we are going to make a radical difference, we must take some radical steps.”

“District pastor of Asokoro Seventh-day Adventist Church, Abuja, Musa Munaji [Nigeria], has called on the government at all levels to apply stiffer penalties for perpetrators of rape and other gender-based violence,” Henry Tyohemba writes in an article for the Nigerian website Leadership. “Munaji made the call . . . during a peaceful walk to raise awareness and advocate for the end of violence around the world.

Speaking in regards to the Adventist Church’s enditnow Emphasis Day, “he said perpetrators shouldn’t be hidden once they are found guilty, but allowed to face the consequences so as to put a stop to the act. He said men and women were created in the image of God, saying that every individual either man or woman is valued in the face of the Lord.

“The spiritual father also condemned violence of any kind, either emotional, physical, or psychological. ‘As a church, we are saying no to violence of any type, against women, men or children.’ “

Grace Okah, director of women’s ministries for the North Central Nigeria Conference, said, “Women and children have been victimized and have not been given their due rights in society. They have suffered a lot and the perpetrators have not faced enough . . . and it has affected some people’s lives.’ “

Loma Linda University Medical Center entryway design is being praised for providing safety to employees and visitors. In an article from Forbes, “hospital design experts Christina Grimes and Sarah Markovitz explain how caregiver environments can balance the need to maintain a welcoming environment while protecting staff and patients from the recent uptick of violence at healthcare facilities.”

The article follows with other types of safety ideas for protecting healthcare workers and others.

—From Forbes, “Violence Against Healthcare Workers Is At An All-Time High: Here’s How Workplaces Can Keep Them Safe.”

Calypso performer Slinger Francisco, “The Mighty Sparrow,” will now be known as “Brother Francisco” after his recent baptism at Far Rockaway Beach in New York, according to the Searchlight newspaper. Sparrow, 87, who now lives in Queens, New York, had a career as a calypso vocalist, songwriter, and guitarist. He was known as the “Calypso King of the World.”

“With his baptism as a Seventh-day Adventist, it’s uncertain if the legendary Mighty Sparrow will ever again sing calypsos to his legions of fans worldwide,” reported New York Carib News.

According to the Caribbean Union Conference, Pastor Claudius Morgan, who performed the baptism, “has so far led 20,000+ people to Christ and established 15 churches in the Caribbean and North America. He is one of the few evangelists in the World Church who effectively combines singing and preaching in his ministry.”